I suppose there have been flimsier inspirations for movies than Rampage, the 1980s arcade game that has players assume the forms of giant monsters who try to demolish entire cities before the military demolishes them. Inspirations such as, say, the Strawberry Shortcake doll, or My Little Pony. But I'll be damned if I could think of any examples while being pummeled by the thunderous stupidity and terrible jokes of the new action blockbuster Rampage, a work that somehow makes its director Brad Peyton's previous Dwayne Johnson adventure San Andreas look like the magazine-cover subject for Cahiers du Cinéma. Heaven knows I wasn't expecting braininess from this popcorn-muncher starring The Artist Formerly Known As The Rock. With the film arriving so soon after the irresistible Jumanji: Welcome to the Jungle, though, was asking for slightly less idiocy really asking too much?

Its narrative just a tad more complex than the game's, Rampage casts Johnson as a San Diego Wildlife Park primatologist and former U.S. Army Special Forces commander (because of course) who has to save the world – or at least Chicago – from an attack by three gigantic, genetically mutated creatures: a wolf with flying-squirrel wings, a crocodile with porcupine quills, and a super-sized version of his lovable, practical-joke-happy gorilla pal George. To be fair, some of the movie's individual bits are pretty fun: the wolf sneaking up on Joe Manganiello and gobbling him in one bite; the croc zipping through Lake Michigan and casually toppling a ferry boat. (If those beasts' annihilation of the Windy City are more fun than George's, it's because we've already seen numerous King Kongs, and don't really need another.) And although it took a while to warm to him, I wound up quite enjoying Jeffrey Dean Morgan's performance as a drawling government official who shares nuggets of wisdom gleaned from his grandpappy and treats every human being around him like a slow-witted two-year-old, perhaps because he read the script in advance. 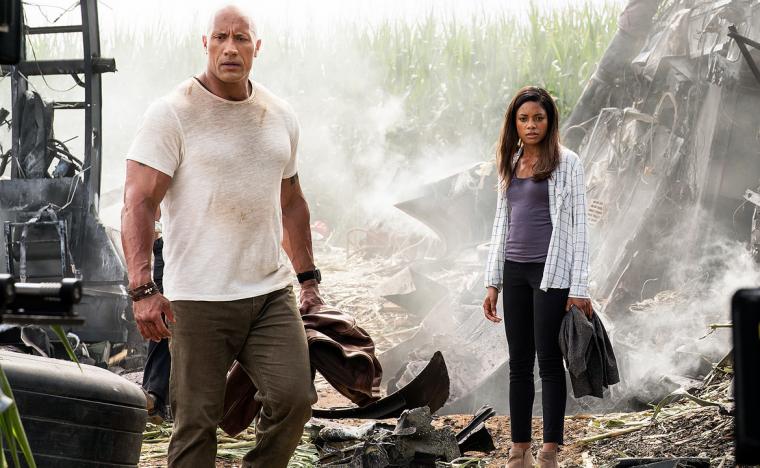 You know a goofy monster mash is in trouble, however, when it manages to badly miscast Dwayne Johnson, a singularly enjoyable screen presence who, until now, has somehow managed to appear ideally cast in just about everything. Yet nothing about Johnson's affable, apparently unchangeable movie persona – his unforced sincerity, his easy charisma, his friendly smile – meshes with his role here as a professed loner with contempt for the human race. (When a scientist played by Naomie Harris asks him “What makes you dislike people so much?”, the moment is jarring, because Johnson appears to like everyone.) Still, Johnson at least comes off better than the unbearably broad Malin Akerman and Jake Lacy as the nefarious architects behind the genetic mutations – characters whose cartoon evil is so blatantly telegraphed that I cringed at their every joint appearance. (It's some kind of foul miracle that Peyton could make such gifted comic performers seem like such hopelessly bad ones.) Johnson also comes off better, much better, than the script, which is merely imbecilic in the first half and morphs into imbecilic and unfunny in the excessively jokey second.

And nowhere does Rampage falter more egregiously than in its offensive and impossible anthropomorphizing of George, who appears considerably smarter than half the humans with speaking roles, but who we're also made to root for far past the point of sense. When Johnson, his voice trembling with emotion, says of the wounded gorilla “He saved my life … he saved a lot of people's lives …,” was there no one around to remind the filmmakers that he also, you know, ended several hundred of them? On more than one occasion, George charmingly flips Johnson off and then buddies up to him with a fist bump. If that ape winds up co-starring in the next Fast & the Furious, I swear I'm gonna retire from this job. 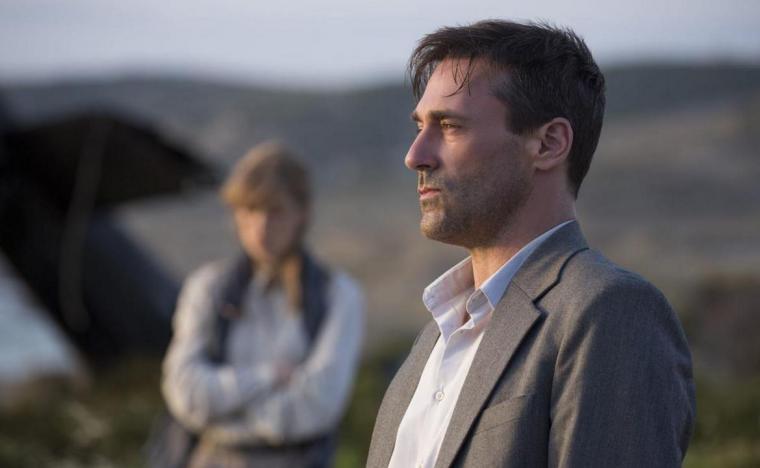 Tony Gilroy wrote the screenplays for Matt Damon's first three Jason Bourne films and 2012's The Bourne Legacy, and his latest script, for director Brad Anderson's Beirut, plays just like a Bourne picture, albeit without the wild stunts and with far more clichés. Ten years after terrorists killed his wife while forcibly reclaiming custody of his 13-year-old ward, Jon Hamm's former U.S. diplomat Mason Skiles returns, in 1982, to civil-war-ravaged Beirut in order to negotiate the safe return of a kidnapped American friend in exchange for the release of a Lebanese political prisoner. As action-thriller narratives go, that one's pretty solid, if not terriby novel. But couldn't it have been delivered without quite so many genre contrivances? Wife gunned down in front of our hero? Check. Wife dying in his arms? Check. A cut to “10 years later” and evidence that Skiles is now an isolated, alcoholic loner? Check and check. A bunch of shifty-eyed CIA types, and a token Gal Friday, luring the guy back into overseas service? Yup. Lots of establishing shots of bombed-out buildings and trash cans on fire? Uh-huh. A street shooting not two minutes after Skiles disembarks his plane, with his chipper liaison offering an ironic “Welcome to Beirut!” You betcha. Drunken benders, and thwarted negotiations, and heavy-handed political statements, and mournful Arabic music on the soundtrack, and the “surprise” of the chief terrorist being that now-grown 13-year-old whom Skiles so dutifully protected? Yes, yes, yes, yes, yes.

Yet as “baby's first Bourne” as the movie frequently is, at least it's well executed. Anderson keeps the pacing snappy and delivers a couple truly unexpected jolts in a shocking bullet to the brain and an explosion that lands in the midst of a funny anecdote. Though they may as well have “untrustworthy government stooge” tattooed on their foreheads, the stellar character actors Shia Whigham, Larry Pine, and Breaking Bad's Dean Norris – with a full head of hair! – are excellent as Skiles' handlers, while Rosamund Pike gets more to run with here than she did a few weeks ago in 7 Days in Entebbe. (It's been quite a spring for terrorist-themed dramas with Pike as their female lead.) While it's nearly inarguable that the film trades in tired Middle Eastern stereotypes and doesn't display much interest in the residents of its titular capital city, the sweet-faced Idir Chender does what he can to make his terrorist more morally complex than the genre requires. And best of all, Beirut at least provides Jon Hamm with a true movie-star role that his talent, charisma, and ridiculous good looks so easily deserve and, bizarrely, so rarely get. I know that Hollywood no longer traffics in the type of adult-driven entertainments that would've made the guy a big-screen icon in the '40s and '50s. But the fact that this professionally presented yet all-too-familiar outing is Hamm's first starring vehicle since his TV series ended three years ago? That's mad, man. 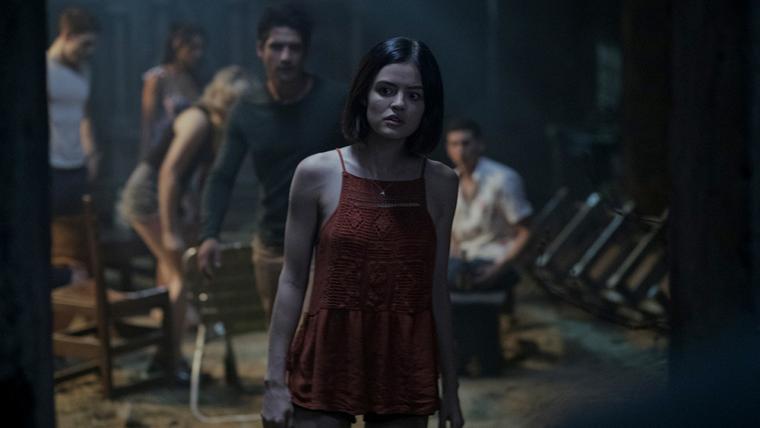 Over the past 10 years, Blumhouse Productions has released the Paranormal Activity series, the Insidious series, the Sinister series, and the Purge series – to say nothing of the Oscar-winning Whiplash and Get Out – and somehow the dismal fright flick Blumhouse's Truth or Dare is the title the company chooses to officially attach its moniker to?! As with most good horror movies, there's a simple setup: A malevolent spirit forces a bunch of college kids to play an unending, high-risk game of Truth or Dare, with ugly deaths coming to those who tell a lie or refuse their challenges. As with most bad horror movies, you couldn't possibly care less if anyone on-screen lives or dies. For a while, the gimmick is promising enough, and the actors capable enough, that you can deal with the vacuous personalities and banal dialogue. And even though the cheesy Joker expressions on the momentarily possessed look all too much like what one character describes as “a messed-up Snapchat filter,” the ear-to-ear smiles are creepily enjoyable. (When lead Lucy Hale grins in this manner, she looks uncannily, and disturbingly, like Anne Hathaway.) But the shocks in this PG-13 trifle are so ineptly staged, and the visuals so cheap, that Blumhouse's latest isn't satisfying on even a mindless-time-waster level, and the movie's performers – among them talents including Tyler Posey, Violett Beane, and The Edge of Seventeen's terrific Hayden Szeto – just end up looking silly for acting so freaked. I'm thinking Blumhouse's Madonna: Truth or Dare would've been way scarier.

For reviews of Isle of Dogs and Sgt. Stubby: An American Hero, visit “Animating Season.”