Harlem Nights: “If Beale Street Could Talk” and “On the Basis of Sex” 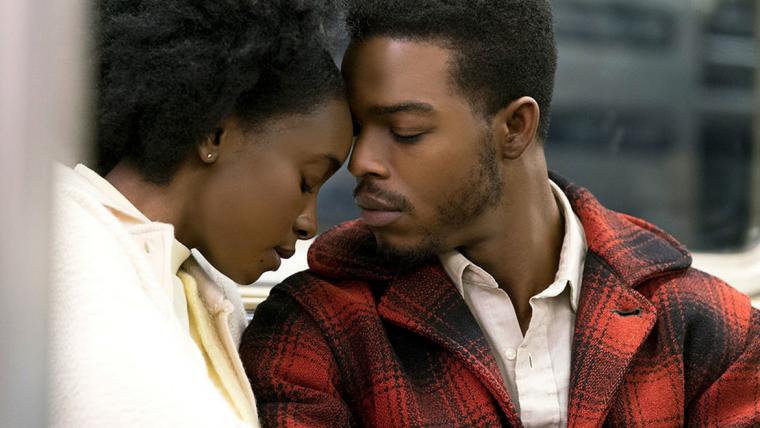 Kiki Layne and Stephen James in If Beale Street Could Talk

IF BEALE STREET COULD TALK

At first, it all seems too romantic – or maybe the word is “corny” – to be believed. As we listen to the melancholy, strings-heavy refrains of composer Nicholas Britell's score, a pair of beautiful young lovers stroll through their Harlem neighborhood on a warm, mid-autumn evening, and we can't help but notice that the blazing gold of the leaves matches the gold of the woman's jacket, which, in turn, matches the gold of the man's shirt. Is If Beale Street Could Talk's writer/director Barry Jenkins paying some kind of tribute to the boldly hued, fantasy-land charms of La La Land, the movie that almost made off with the Best Picture Oscar that (ya know, eventually) went to Jenkins' Moonlight?

The short answer is no; at no point do the characters in Jenkins' adaptation of James Baldwin's 1974 novel burst into song or soft-shoe their ways into our hearts. But they get there regardless. Openly melodramatic, thematically rich, and daring in both its visual and emotional palettes, If Beale Street Could Talk feels like a film that only Moonlight's director could have made, at least with this blend of formal intelligence and unembarrassed romanticism. You may not necessarily “believe” in its primary- and secondary-color schemes, with emerald greens and royal blues also doing a consistent share of heavy lifting. Yet Jenkins' drama employs its striking pigments with almost poetic aplomb, capturing a relationship, and an entire world, that might've been as glorious as a Technicolor musical if reality weren't demanding a present more figuratively (and in some ways literally) black and white.

Sticking to Baldwin's early-'70s timeline, If Beale Street Could Talk casts Stephan James as Alonzo “Fonny” Hunt, a 22-year-old aspiring artist, and Kiki Layne as Tish Rivers, a 19-year-old who works the perfume counter at an upscale department store. Friends since childhood, the pair, as we discover through flashbacks, has only recently declared their love. But after one of their nights out ends in a frightening encounter with a clearly racist beat cop (Ed Skrein), the officer frames Fonny for rape, and Tish's lover is consequently sent to jail to await trial. Tish, meanwhile, discovers that she's pregnant, and enlists both her family and Fonny's to raise money for his defense – and, in the case of Tish's mother Sharon (Regina King), to hopefully convince the rape victim (Emily Rios' Victoria) to admit Fonny's innocence. That probably sounds like the narrative to any number of dramatic thrillers involving the wrongly accused. Jenkins, however, appears only peripherally invested in the crime. Instead, as Baldwin did, he uses it to explore far deeper questions of cultural identity, racial bias, and the reaches of familial and romantic love. Given the beauty of Baldwin's prose and the depths of his performers' talents, that was obviously the smart way to go. 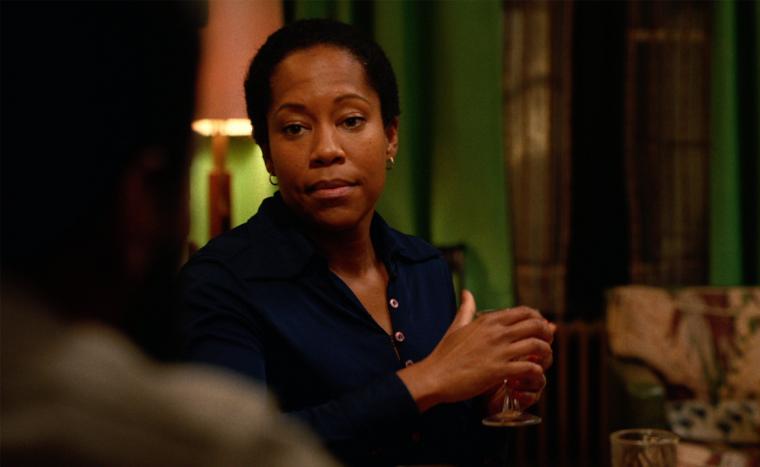 Ravishing though the movie is to look at – and, thanks to Britell's gorgeous compositions, to listen to – I'll admit to some mild antsiness during Fonny's and Tish's neighborhood walks and romantic trysts, which tend to feel like they're happening in slow motion even when they aren't. But I wasn't ever unhappy to have James and Layne around, he with his heartbreaking candor and gradually deflating spirit, she with her natural delicacy that never translates as weakness. (While James was recently excellent in Amazon Prime's Homecoming, this is Layne's first feature-film role, and it's an arresting debut.) But the human-size planets orbiting Fonny's and Tish's collective sun are even more dazzling. Colman Domingo and Michael Beach, portraying the lovers' fathers, have an easy camaraderie and project an unflinching willingness to do whatever it takes, legal or otherwise, to free the young man from prison. King, who's particularly devastating when Sharon travels to Puerto Rico to confront Victoria, enacts maternal warmth and anguish through the performer's reliably matter-of-fact radiance, while Aunjanue Ellis, in an unforgettable scene, plays her opposite number: a woman of devout biblical faith whose prejudices have blinded her to everything but hate.

Teyonah Parris, so marvelous in Spike Lee's Chi-raq, is forceful and real as Tish's sister; Ebony Obsidian and Dominique Thorne play bad apples who didn't fall far from their mother's tree; Finn Wittrock and Dave Franco are sweet and humble as two of the rare white figures who can see beyond the color of Fonny's and Tish's skin. And Brian Tyree Henry, for 10 transcendent minutes, earns best-in-show honors for his wrenching turn as a friend of Fonny's recently released from prison, his initial bonhomie deflating as he quietly, meticulously recounts the emotional effect of years of traumatizing abuse. Henry isn't in the film for nearly as long as you want him to be. But small though his role is, Jenkins' latest is unimaginable without him – just as it's unimaginable without those screen-popping colors, and those glorious cascades of music, and the unmistakable Baldwin language that flows as gracefully aloud as it does on the page. So no: If Beale Street Could Talk isn't a Jenkins nod to La La Land. Damn, though, does it ever sing. 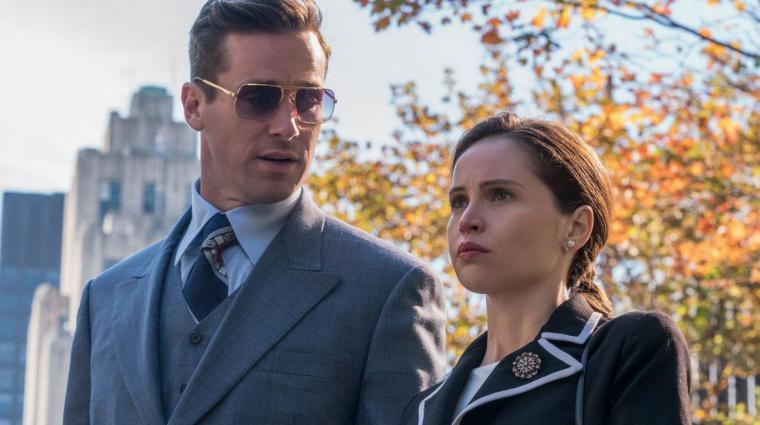 ON THE BASIS OF SEX

Call me a libtard snowflake, but I was so delighted to see a packed house for my Friday screening of the Ruth Bader Ginsburg bio-pic On the Basis of Sex that I was practically giddy. I would've been even more delighted if the movie itself were better, but you can't have everything.

Following the Supreme Court Justice's life and career from her 1956 arrival as a first-year Harvard student to the 1970 Moritz v. Commissioner sexual-discrimination case that made Ginsburg's name (a case that found a bachelor denied a tax exemption – one outinely given to women and widowers – for caring for his ailing mother), director Mimi Leder's mostly upbeat drama panders to its demographic in obvious ways, inviting us to groan with contempt at Sam Waterston's flagrant sexism and laugh with triumph when Felicity Jones' Ruth verbally smacks the old coot down. Even the camerawork and editing invite such reactions, as when a scene of nefarious lawyers with unkempt eyebrows in a smoke-filled room transitions to domestic bliss with an apron-clad Armie Hammer, as Ruth's husband Martin, cooking dinner in the Ginsburg's brightly lit kitchen. (It should go without saying that Hammer's eyebrows, like everything about the guy, are perfectly sculpted.) Screenwriter Daniel Stiepleman's dialogue, meanwhile, is distractingly heavy with exposition and platitudes, with even the best lines – “If everyone is sitting, that's not a movement; that's a support group” – sounding less like conversation than winning entries in a snappy-rejoinder contest.

But even though it feels too much like one of those issue-oriented TV movies that used to sweep the Emmys, and even though we don't really learn anything here that couldn't be gleaned through a Wikipedia perusal, Leder's outing generally works, and for its target audience, works quite well. No matter your familiarity with Ginsburg's history, there's definite inspiration to be found in watching Jones' diminutive tyro upend the expectations of those around her, and on a strictly aesthetic level, there's enormous fun in watching a five-foot-three actress play opposite a six-foot-five Hammer. (Before the camera pans away from their lovemaking, this Ruth practically climbs her husband, a sight that might cause some of Ginsburg's elder fans to faint dead away.) Although performers such as Justin Theroux, Kathy Bates, Stephen Root, Jack Reynor, and Chris Mulkey aren't asked to play more than stereotypes, the punchy nature of the trial and its particulars gives them all their fair share of satisfying material. And whether enjoying their playful repartee or simply staring at one another with extraordinary affection – especially in the fraught, moving silence after Martin is diagnosed with testicular cancer – Jones and Hammer really are a treat together; Leder's film may only be not-bad as a bio-pic, but as screen romances go, it's pretty darned great. I'd call the Jones/Hammer match-up the finest thing about On the Basis of Sex if even the stars' chemistry didn't pale next to the cameo, in the film's final seconds, in which an instantly recognizable figure ascends Washington D.C. steps. Leave it to Ruth Bader Ginsburg to steal her own movie merely by showing up.

For reviews of The Upside, A Dog's Way Home, and Replicas, visit “Hart Tugger.”