"Heartbreakers" Coughs Up a Soggy Center: Also, "Enemy at the Gates" and 2000 Oscars Postmortem Though the competition is fierce - The Insider, All That Jazz, maybe even Beetlejuice - I'm not sure I've ever seen a movie that made smoking look more repellant than David Mirkin's comedy Heartbreakers.

In the film, Sigourney Weaver and Jennifer Love Hewitt play Max and Page Conners, mother and daughter con artists who use their wiles and undeniable physical attributes to screw rich men out of their dough. After netting $300,000 and a Mercedes from their latest patsy (Ray Liotta), the duo attempt one last big score each; Page tries to seduce a lovable bartender (Jason Lee) whose establishment is worth an approximate $3 million, while Max goes after a tobacco mogul (Gene Hackman) worth considerably more. There's a major downside to Max's plan, though: This man is repulsive.

Wheezing, hacking up phlegm, prone to earth-shaking coughing fits, and with teeth the color of grout, Hackman's billionaire is a loathsome creation, and all the more hysterically funny for being so. Movie fans have been aware of this actor's comedic genius for decades, ranging from his show-stealing blind man in Young Frankenstein to his brilliantly clueless Republican in The Birdcage, and whenever he's onscreen, wrapped in a cloud of smoke, Heartbreakers is a comic gem. It's also pretty damn good when Nora Dunn appears as Hackman's deviously devoted maid, or when Liotta spews malevolent rage at being duped, or when Weaver, in disguise as a Russian aristocrat, sings a deep-chested version of "Back in the U.S.S.R."

The soggy center of the movie, though, is devoted to the battle of wills between Max, who wants her daughter to have a financially secure future, and Page, who wants to be her own person, and it's a serious drain on the fun. I guess there's a place for this kind of dynamic in the film, but not only do Weaver and Hewitt not look like mother and daughter, they don't feel like mother and daughter. Their verbal duels just don't have any snap; it seems like they've only recently been introduced. Director Mirkin pulls off some entertaining visual gags and keeps the action moving gracefully, but he can't get any chemistry going between these two, whose acting styles are so different that only marvelous repartee would suffice. (Mirkin didn't have any such problem in Romy & Michele's High School Reunion, one of the most ebullient, underrated comedies of the '90s.) Heartbreakers is amusing in fits and spurts - when Hackman and other fine comics are onscreen, it's sometimes even better than that - and mostly enjoyable, but it's hard to get excited about any comedy that makes you wish the leads were supporting characters, and vice versa. 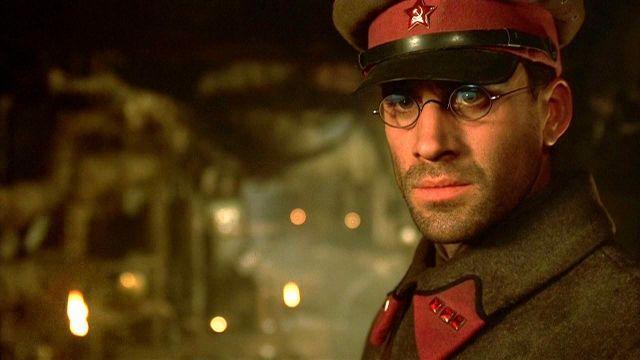 ENEMY AT THE GATES

Maybe it's too soon to make this judgment, but is it possible that the harrowing realism of Saving Private Ryan forever ruined World War II movies for us? The current Enemy at the Gates, directed by Jean-Jacques Annaud, features terrific photography (courtesy of Robert Fraisse) and exquisite production values, but compromises its World War II setting with two exceedingly stupid plotlines. The first is romantic hogwash, a half-baked love triangle between a Russian sharpshooter (Jude Law), his Army-officer friend (Joseph Fiennes), and the woman they both love (Rachel Weisz). And the second is dramatically hokey, as Law's character faces off against a Nazi sniper (Ed Harris), in a protracted game of cat and mouse. Saving Private Ryan had its share of sappy moments, too, but it felt respectful of the war; in Annaud's film, the battles between the Russians and the Germans feel secondary to the romantic and egocentric battles of good-looking performers, and it borders on the offensive. (Also mostly offensive: the movie's score is by Titanic's bombastic James Horner, and even if you haven't yet seen Enemy at the Gates, believe me, you've already heard the music.) The actors, Law and Harris in particular, do what they can with second-and-third-rate situations and dialogue, but they can't overcome the film's triteness, or the fact that its running length feels as long as an actual war. Enemy at the Gates is handsomely designed and showcases sexy movie stars. The question remains: In a gritty World War II drama, is that a good thing?

By the end of this year's Oscar telecast, was anyone else shocked that Traffic didn't win Best Picture? Most thought it a shoo-in for Screenplay Adaptation, and a great shot for Benicio Del Toro as Supporting Actor - both of which it won - but it also snagged Film Editing away from the combined threat of Gladiator and Crouching Tiger, and then the shockeroo of the night occurred when Steven Soderbergh, the director so nice they nominated him twice, pulled off a major upset by besting Ang Lee for Best Director. For my money, it was the evening's most heartening event; not only did Soderbergh completely deserve the accolade (with voters apparently deciding not to punish him for making two excellent movies last year), but he provided the night's most inspiring speech, thanking everyone who spends their time creating, and stating, "This world would be unlivable without art." That's four out of four that Traffic collected. And then what happens? That damned front-runner Gladiator goes on to win Best Picture.

In truth, though, even that was a rather historic decision: It marked the first time since 1949 that a film was awarded Best Picture without additionally receiving Best Director and/or Best Screenplay (which it lost to Almost Famous's Cameron Crowe. I can live with that decision by seeing it as belated recognition for Say Anything ... and Jerry Maguire). Gladiator did manage a final tally of five Oscars, and pulled off a relative surprise with Russell Crowe's Best Actor citation (Had you asked me right before Hilary Swank announced the winner, I would have put big bucks on Ed Harris for Pollock, especially after co-star Marcia Gay Harden's win early in the night), but by the night's halfway point, with its wins relegated to such categories as Sound and Visual Effects (for the computerized tiger?), I doubted its chances for the big prize. Before the final pronouncement of Best Picture, Gladiator, Crouching Tiger, and Traffic had four awards each - now that's a horse race.

I expect this year's telecast will earn some swell reviews, and not just because of the numerous upsets. Host Steve Martin was impeccable; you never knew, during his introductions, whether he was going to be sincere or sardonic, and that gave an unpredictable edge to everything he said. We were spared the usual, endless series of film clips. Debbie Allen's choreography was kept to a minimum. The speeches were admirably brief. And the whole affair came in at under three and a half hours, forty-odd minutes shorter than last year's ceremony. In a night filled with surprises, that had to be the biggest one.