Hogwarts and All: "Harry Potter & the Half-Blood Prince" 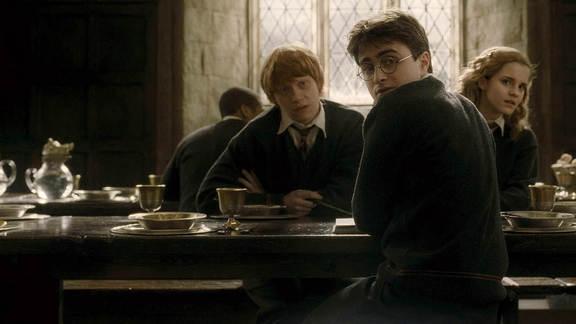 Excepting director Alfonso Cuarón's Harry Potter & the Prisoner of Azkaban, I haven't been terribly crazy about the film adaptations of J.K. Rowling's books. But here's something that I absolutely do adore: seeing these movies in a crowded theater on opening day.

Anyone who believes that a cineplex auditorium filled-to-brimming with kids is nothing but a migraine waiting to happen obviously hasn't been to one that's housing a new Harry Potter flick. Back in the summer of 2007, when the Warner Bros. logo first appeared before a showing of Harry Potter & the Order of the Phoenix, the youths at my screening went berserk, shrieking and applauding with spectacularly infectious mania. But the collective mood was markedly different, yet no less exciting, at my Wednesday-afternoon visit to Harry Potter & the Half-Blood Prince.

This time, instead of screaming, there was only random shushing during the movie's opening seconds, and by the time the film's title presented itself, the packed house was dead silent (perhaps in deference to the more serious-minded nature of Rowling's sixth offering). The silence, however, carried an expectant, exhilarating buzz that was impossible to miss - one that I hadn't experienced since last summer's The Dark Knight - and during its first 20 minutes or so, Half-Blood Prince felt completely deserving of the audience's goodwill.

After a brief recap of Phoenix's climax, the movie takes off like an almost literal bat out of hell, as a trio of Death Eaters tear into downtown London, laying waste to the Millennium Bridge and ricocheting through the streets and amongst terrified passersby. With cinematographer Bruno Delbonnel's gliding camerawork ensuring that the ride is as gracefully breathless as it is unnerving, director David Yates delivers a powerhouse intro - perhaps the series' best yet - and the film continues to hold you in a firm grip when the action slows for the return appearances of Harry (Daniel Radcliffe) and Dumbledore (Michael Gambon).

Popping into the ramshackle dwelling of Horace Slughorn (Jim Broadbent), whom Dumbledore hopes to recruit as a professor, the aged wizard performs an enchanting bit of house-cleaning magic, the eccentric Broadbent establishes himself as a welcome new cast member, and we're treated to a lovely bit of throwaway character comedy, in which Dumbledore, returning from the bathroom, happily absconds with a knitting magazine. And then it's off to Hogwarts, at which point - to the delight of most and the resignation of a few (myself included) - it's business as usual.

As someone who hasn't read a word of Rowling (I know, I know ... the line for complaints forms at the rear ... ), I've long given up hope of being as dazzled by the film series as most of its book-devouring fans are. And I absolutely appreciate the continually imaginative design, the agreeably nonchalant supernaturalism, and the employment of a ridiculously gifted batch of British character actors. Only in a Harry Potter venture could the great Timothy Spall show up for all of five seconds, and the even greater Maggie Smith make her first appearance as an out-of-focus background figure.

Yet it's the strangest thing about the last three Harry Potters: Every time one settles into its prescribed groove - Dining Hall scene followed by magical-classroom routine followed by Quidditch match - my attention starts wandering, and so, it seems, does the film's. Despite being shot and edited with snap, these familiar sequences have become so de rigueur that there's practically no surprise or joy left in them, and even Yates' considerable visual panache can't make them feel fresh; Half-Blood Prince is rarely boring, but only on occasion does it feel alive with any sense of discovery. Whenever the film provides an enticing bit of new information, such as Slughorn's revelation of the secret behind Voldemort's immortality, the pleasure you get is palpable. But too much of this latest installment feels like marking time - the movie dies a slow death when Rupert Grint's Ron is affected by a powerful love potion - and on a few occasions here, as during the protracted farewell to Hagrid's pet arachnid, long minutes pass in which the narrative appears to stop cold.

Still, there are sensational bits aplenty. The toy shop run by the twin Weasley brothers is like a miniaturized, non-annoying version of Mr. Magorioum's Wonder Emporium, and there are some exquisite scares in the final reel, especially upon the unexpected arrival of dozens of grotesque, Gollum-esque figures. And heaven knows the cast provides a healthy dose of fun: Gambon, Broadbent, the perverse Helena Bonham Carter, and the peerless Alan Rickman are sublime, of course, but so are Evanna Lynch as the wispy loon Luna, Jessie Cave as the obsessive Lavender Brown, and Frank Dillane as the teenage Voldemort - a pitch-perfect young match for Ralph Fiennes. For all of its running in circles, Harry Potter & the Half-Blood Prince is, in the end, remarkably easy to sit through. Asked by Dumbledore whether he's surprised by some latest bit of hocus pocus, Harry tells him, "After all these years, I just sort of go with it." Wise words, Harry.