Holiday Harridans: “A Bad Moms Christmas” and “The Florida Project” 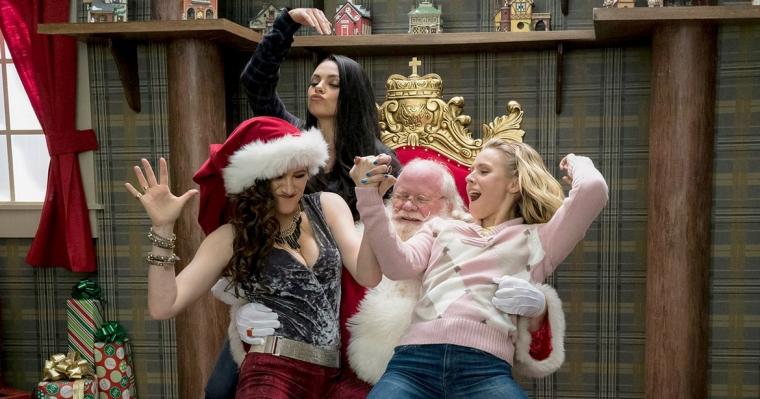 I probably would've had a better time at A Bad Moms Christmas if it reminded me more of last year's Bad Moms and less of last month's Tyler Perry's Boo 2! A Madea Halloween.

Both, after all, are holiday-themed sequels obviously made on the quick – so quick that it's impossible not to notice how slapdash and ugly they look. (The ultra-close closeups that ABMC directors Jon Lucas and Scott Moore impose on their cast should constitute crimes against comedy, and certainly against the dignity of Susan Sarandon, who's so heavily made-up that you'd think she was still playing Baby Jane-era Bette Davis.) Both repeat previously successful shtick for diminished returns, with the Bad Moms follow-up repurposing its precursor's slow-motion grocery-store melee no less than three times, most noxiously when our leading trio twerks and grinds on an all-too-willing Santa. Both blend scenes of grueling slapstick (Christine Baranski's and Mila Kunis' Christmas Eve smackdown is the worst) with maudlin scenes of parent/child bonding (which Baranski and Kunis pull off with far greater skill). But both, at least, also provide a modicum of pleasure – Boo 2 with its belly laughs, and the newer film with its steady supply of smiles, even though Lucas' and Moore's movie severely tests the limits of big-screen likability.

Taking place mere months after the antics of 2016's surprise hit, A Bad Moms Christmas finds Kunis, Kathryn Hahn, and Kristen Bell visited by their respective mothers Baranski, Sarandon, and Cheryl Hines, all of whose character outlines could fit on cocktail napkins: Baranski is obscenely rich and emotionally withholding; Sarandon is a long-absent weed smoker and inveterate gambler; Hines is a chirpy manipulator with boundary issues. (In an attempt to guilt-trip her daughter, Hines pulls out the big guns: “I have heart cancer. Stage 12.”) There's also a superfluous Peter Gallagher as Kunis' dad. But in truth, nothing about the film doesn't feel superfluous, from the labored plotting to the time-wasting montages to the cameo by original Bad Moms villain Christina Applegate, who presumably, and hopefully, had better things to do this time around.

All three of the elder moms, however, deliver amusing stereotypes and a fair number of chuckles – especially Baranski, whose devilish turn is like a reunion with the performer's hilariously tense in-law from 1994's excellent holiday farce The Ref. (Some of the film's nastiest, wittiest moments involve her dealings with her daughter's boyfriend, again played by Jay Hernandez, whom Baranski treats as the hired help when she's able to recognize him at all.) Kunis and Bell do their expected routines – sardonically disgruntled for the former, comically flustered for the latter – yet do them expectedly well. And Hahn, yet again, proves to be the series' ace in the hole, so confident, frank, and offhandedly riotous that it makes sense that the camera catches Kunis laughing at roughly 75 percent of Hahn's jokes. A Bad Moms Christmas is never more surprising, or more subversive, than when Justin Hartley's male stripper shows up at Hahn's spa in need of some below-the-belt manscaping, and the two instantly fall for one another with devastating sweetness and earnestness – she with wax strips in hand and he with his legs in the air. A longer break from all these characters would be nice, yet I'm still kind of rooting for Hahn and Hartley and A Bad Moms Valentine's Day. 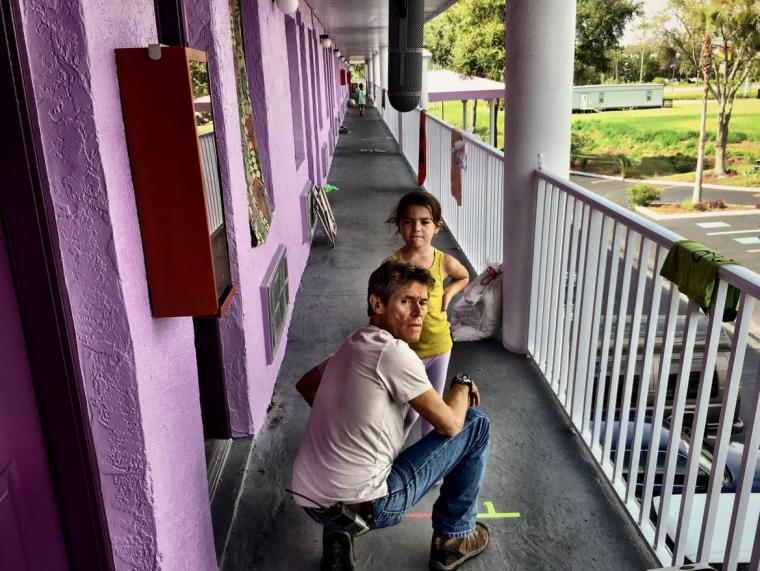 As it had been an unseemly length of time since I last visited Iowa City's FilmScene, I could hardly wait to return for The Florida Project, a largely plotless tale by director Sean Baker (he of the iPhone miracle Tangerine) that explores the lives of residents in a mauve-colored eyesore just outside Disney World – principally protagonist Moonie (Brooklynn Prince), who's like Oliver Twist, the Artful Dodger, and Fagin rolled into one tart-tongued, apple-cheeked, six-year-old package. Considering how much I loved the film, I'm a little surprised that I returned to the Quad Cities as opposed to setting up camp outside the venue and popping in for daily screenings.

Almost the entirety of Baker's achievement is set in or near the confines of a motel misleadingly yet aspirationally named the Magic Castle, with Willem Dafoe (in a career-peak turn) on hand as the building's beleaguered, patient-to-a-fault manager Bobby. Yet I'm not sure there's anything about this film that isn't magic, and magic sans irony, to boot. At first, you may think that nothing is going to come from The Florida Project beyond a series of beautifully observed vignettes: Moonie and her equally young, equally unsupervised pals (Christopher Rivera's Scooty and Valeria Cotto's Jancey) scamming money for soft-serve ice cream; Moonie and her loving, hopelessly unfit mother (the staggeringly fine Bria Vinaite) selling wholesale perfume at outrageous markups; Bobby escorting a potential predator off the motel grounds with a clench-jawed delicacy that turns frighteningly feral. (Seriously, I can't rave enough about Dafoe in this thing. You don't know which his tender, anxious, complexly rendered Bobby deserves first: a hug, a raise, or an Oscar.) But Baker and co-screenwriter Chris Bergoch are unobtrusively developing an intensely strong narrative beneath these seemingly slice-of-life encounters – watch for how many scenes Moonie spends in the bathtub – and once it's revealed, the power of their work proves nearly blindsiding.

There's a lot of mordant humor in the film, with Moonie's exploits viscerally enjoyable yet deeply unsettling, and the astoundingly naturalistic Price holding the camera with a captivating authority reminiscent of Quvenzhané Wallis in Beasts of the Southern Wild. And the cinematography alone is enough to make you grin, considering the lushness with which Alexis Zabe photographs transcendently tacky Orlando locales against baking heat and jaw-dropping sunsets. By the time we got to the movie's final scenes, though, it was all I could do to withhold my sobs, which Baker finally lets you unleash (at least, in my case, on the car ride home) via a climactic flight of imaginative fancy that's at once harrowing, hopeful, tragic, joyous, and exhilarating. I've never seen anything quite like it. I've never seen anything quite like The Florida Project, either.

For reviews of Thor: Ragnarok and LBJ, visit “Thor and More.”