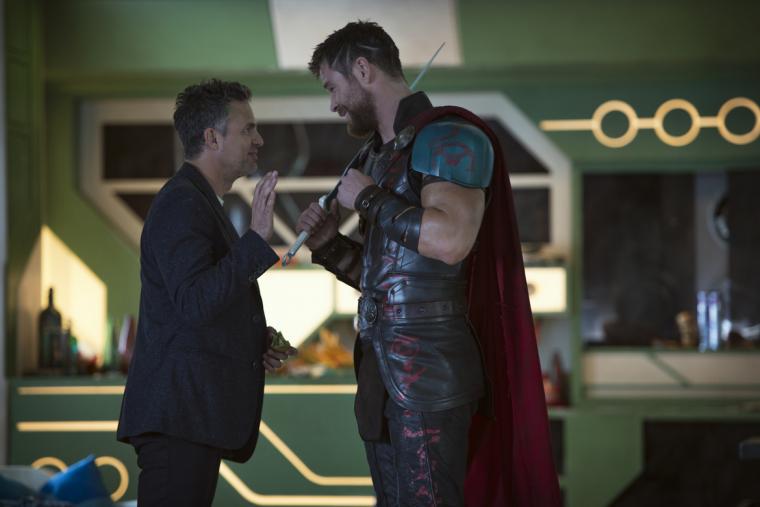 When the first preview for Thor: Ragnarok landed, its action accompanied by the heavy-metal shriek of Led Zeppelin's “Immigrant Song,” the soundtrack selection felt bold and bracing – just the shot-in-the-arm that this franchise, and we, needed after the titular superhero got lost in the crowd of 2015's Avengers: Age of Ultron, and certainly after 2013's largely dismal Thor: The Dark World. When the song played again during the first of the actual film's many, many battles, its return at least felt thematically and promotionally consistent, and hinted at the sort of raucous entertainment the trailer had us hoping for, even if the battle itself was pretty confusing and wasn't that much fun.

Yet when director Taika Waititi and the Marvel brain trust resurrected the tune again for the film's bombastic finale, I winced. Suddenly, it didn't seem that “Immigrant Song” was there for its propulsive energy or references to Valhalla and the hammer of the gods, or even for some kind of spirit-of-the-'70s vibe implied by the trailers' discotheque typography. It felt there because it's now, apparently, just Thor's thing, like screechy guitar licks are Wonder Woman's, or a blaring John Williams trumpet used to be Superman's. And it reminded me how very little was really being done in the film to keep this series fresh, because in the end, Thor: Ragnarok is just following the same old Marvel template, albeit with occasional blasts of Zeppelin. That's not enough to make much of anything here feel new.

Granted, no one's expecting the wheel to be totally reinvented; Marvel has a formula that works, and the studio will no doubt keep working it until crowds stop paying for it. But last fall's Doctor Strange showed that there were vast, unexplored opportunities in terms of shaking up presentation, with its battle sequences thrilling precisely because they were so unpredictable. This summer's marvelous Spider-Man: Homecoming demonstrated the enormous benefits of going smaller, simpler, and more human. Ragnarok, by contrast, never stops feeling familiar, and even its more out-there flourishes, such as the priceless eccentricity of Jeff Goldbum, don't have long-term impact – they're distractions that momentarily amuse and vanish into the ether. Given the film's comedic bent, it was a smart move to hire Waititi for the project, considering how comfortable he appeared with the ironic humor of Hunt for the Wilderpeople and that canny vampire spoof What We Do in the Shadows. But you can practically feel the oppressive weight of the Marvel blueprint on Waiti's shoulders. Every engaging, lighthearted scene is offset by three that focus on thuddingly banal action violence – characters can barely converse without breaking into a fistfight – and the director's gifts don't yet include an eye for comic-book imagery. I don't think there's one arresting shot in the whole of Ragnarok's 130 minutes. 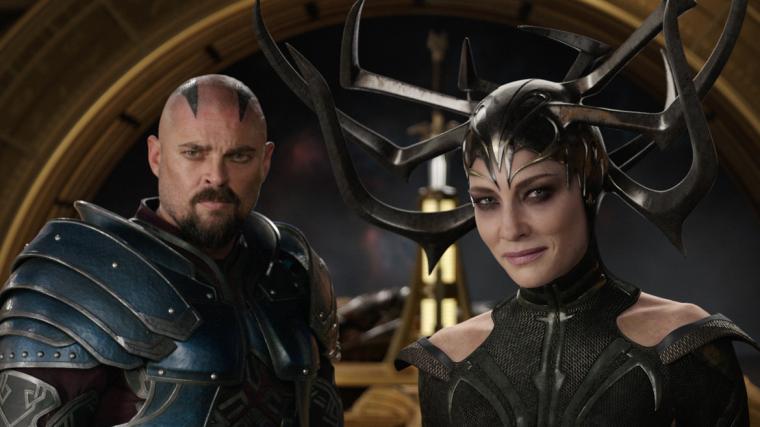 Oh yeah: the plot. Part of it concerns the release of Thor's older sister Hela from a prison of Odin's making and the foretold destruction of home planet Asgard, with Hela making plans to (wait for it …) rule the world. The other, heftier part concerns Thor's attempt to escape a planet-sized garbage dump with the aid of an Asgardian Valkyrie, Thor's nefarious half-brother Loki, and the incredible Hulk. I didn't find either part terribly compelling. Despite the considerable promise inherent in a Hela portrayed by Cate Blanchett, the character is a prototypical, rather blandly designed über-nemesis, and the performer delivers few memorable bits after her early crushing of Thor's hammer. In all honesty, Blanchett did this imperious-witch number with more malice and finesse in Kenneth Branagh's Cinderella. (Was it my imagination, or did Blanchett's dialogue also sound like it was looped in during post-production?) And while the sequences set on the universe's biggest landfill definitely have more energy, they prove sadly repetitive and interchangeable: Thor fights Valkyrie, Thor fights Hulk, Loki fights Valkyrie, Thor fights Loki, Thor fights Hulk again … . (It's also disheartening that the most well-built gag in the whole film is the Hulk's ultimate reveal – a “surprise” arrival that, from the start, has been given away in every last bit of the movie's marketing. The appearance of yet another Avenger, happily, was a better-kept secret.)

As usual with Marvel outings, everything is perfectly pleasant so long as our costumed heroes and villains are just passing time through casual banter, and by now, Chris Hemsworth's Thor, Tom Hiddleston's Loki, Mark Ruffalo's Bruce Banner, and Anthony Hopkins' Odin are so effortless in their roles that merely being in their company is oftentimes entertainment enough. (For her part, Tessa Thompson's inebriated Valkyrie fits snugly into the mix, and elicited my one legitimate laugh when she was almost sure she recognized Banner outside of his Hulk persona.) Yet Thor: Ragnarok doesn't let them do or say anything remotely out of the ordinary, and there isn't enough filmmaking savvy on display to make the typical here feel special. Marvel is giving its fans exactly what they want, and I suppose there's a certain integrity in that. Hopefully, we won't have to wait long – maybe only until February's Black Panther? – for the studio to again give us something we didn't even know we wanted. 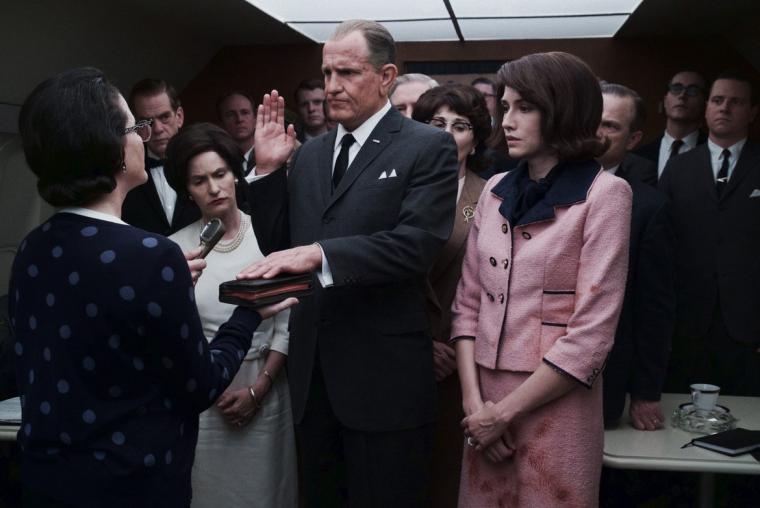 If it sometimes feels like a millennium since Rob Reiner directed a decent movie, that's probably because (with apologies to The Bucket List fans) it's kind of true, as his last really good one was The American President way back in 1995. So maybe it took the tale of another American president for Reiner to again find his footing, because his new LBJ is easily the best thing he's done in more than two decades – a sometimes corny yet terrifically engaging bio-pic that proves Reiner's once-trustworthy talents haven't been completely misplaced.

Covering the years between Lyndon Johnson's late-'50s tenure as Senate majority leader through his public vow to pursue Civil Rights legislation after JFK's death, both Reiner's film and Joey Harstone's screenplay engage in an unsurprising amount of audience-friendly cherry-picking. (There's almost nothing on Vietnam, but we do get lots of comedic profanity and the sight of Johnson conducting a business meeting on the toilet.) Yet Reiner directs with more vigor than he has in ages, particularly in scenes immediately following Kennedy's assassination, and the movie truly digs at the “why”s regarding LBJ's obsession with higher office and the shame he feels after achieving it; for all of its unthreatening, TV-movie appeal, the film is unexpectedly insightful.

It's also sensationally well-acted. Woody Harrelson, refusing to be buried by his heavy prosthetics, gives perhaps his most varied and winning screen performance to date, the actor's drawling rhythms and fierce concentration allowing him to mine every inch of the role's authority, tenacity, poignancy, and self-effacing humor. (“I could walk on the Potomac River, and the next day the headlines would say, 'Johnson can't swim.'”) But he frequently finds scene-partner equals in Richard Jenkins (as Senator Richard Russell), Jeffrey Donovan and Michael Stahl-David (Jack and Bobby, albeit with iffy accents), the ever-welcome Bill Pullman (Senator Ralph Yarborough), and Jennifer Jason Leigh's Lady Bird (despite an insanely distracting fake nose), with the film itself boasting a smooth, easygoing appeal not unlike that of a B-plus West Wing episode – or, for that matter, The American President. All told, I had an infinitely better time at LBJ than I did during that phony, inert HBO movie All the Way with Bryan Cranston as Johnson, and appreciated it all the more for Reiner's return – if not not to greatness, at least to genuinely-good-ness. And considering Reiner first made him name as a serious filmmaker in the 1980s, let's hear it for the '80s shout-outs! Not only is the significant role of aide Walter Jenkins enacted by that decade's teen idol C. Thomas Howell, but Hubert Humphrey is played by Doug McKeon – the kid who caused so much initial consternation for Henry Fonda and Katharine Hepburn in On Golden Pond. As Norman Thayer would say, “Good God!”

For reviews of A Bad Moms Christmas and The Florida Project, visit “Holiday Harridans.”