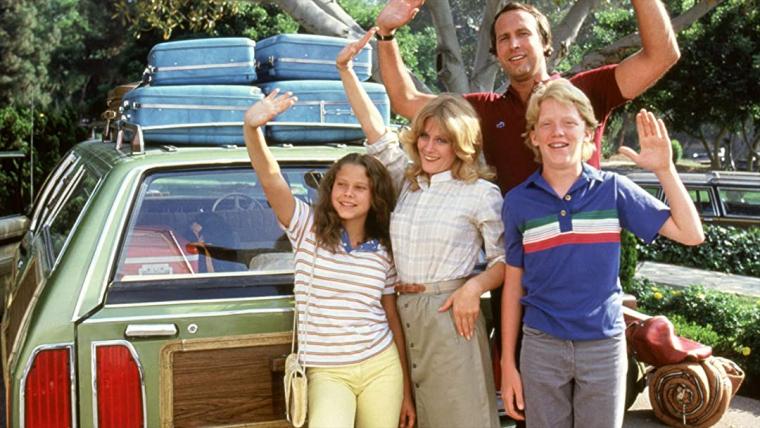 This past weekend, I did something that would have been nearly unthinkable a couple months ago: I took a vacation. Granted, it was a two-day vacation, and I only traveled from my apartment in Rock Island, Illinois, to my parents' house in Crystal Lake, Illinois, and I didn't hit any tourist spots or attend any outdoor festivals or get (unseemly) drunk. But still: It was a vacation, baby! Or at least as close to one as I've had for a long, long time.

Thankfully, though, even during a pandemic, movies frequently let us escape our daily surroundings and experience places and people we otherwise wouldn't. So if you've been finding yourself starved for getaways but don't necessarily want to get away far, or if you're feeling itchy as a result of your daily commute not taking longer than the length of time it takes to get from your bed to your PC, consider these five vacation-based home-viewing options from 1978 to 1995. They're not quite trips to Hawaii, but unlike Walley World, you can at least visit any time you want. 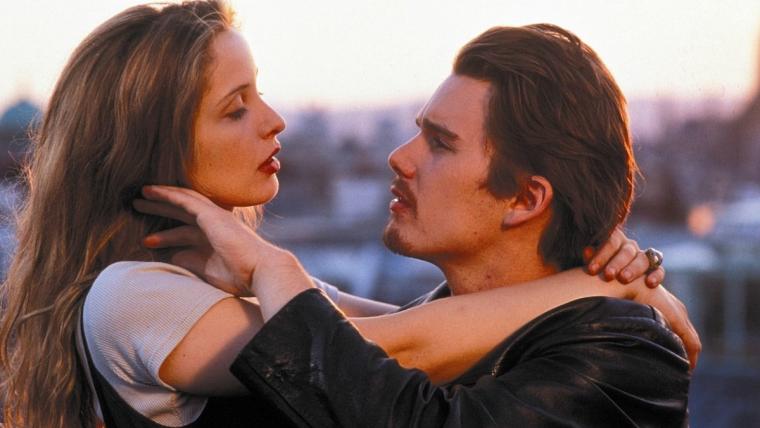 Before Sunrise: Once upon a time, in the enchanted year of 1995, there was a boy named Jesse and a girl named Céline, both in their early 20s. Jesse was from the United States, and had traveled to Spain to meet a girlfriend who dumped him after he arrived. Céline was from France, and had traveled to Budapest to visit her grandmother. One sunny day, Jesse, who decided to tour Europe after his breakup, met Céline on a train from Budapest. The two struck up a conversation, enjoyed each other's company, and voiced regret that they would likely never see each other again. But Jesse had an idea. Even though they had just met, Jesse asked Céline to spend one day with him before they parted ways forever. Although it took some convincing, if not very much, Céline agreed, and the two got off the train in Vienna. They talked. They walked around. They talked some more. They listened to music. They talked some more. They kissed. They laughed. They played pinball. They drank wine in the park. They never stopped talking. And then, the following morning … . Well, I'd love to end this with “... and they both lived Happily Ever After,” but if you've seen Before Sunrise and its sequels (2004's Before Sunset and 2013's Before Midnight), you know that's not precisely what happened. What did happen in '95, though, was magical regardless: Richard Linklater directing Ethan Hawke and Julie Delpy in the warmest, wisest, most thunderously romantic film achievement of the decade, and maybe the all-time-best movie ever made about young people finding their intellectual and emotional soul mates. If the trio's every-nine-years returns to the endlessly fascinating lives of Jesse and Céline continue, we're due for another rendezvous in 2022. They're screen vacations totally worth waiting for. 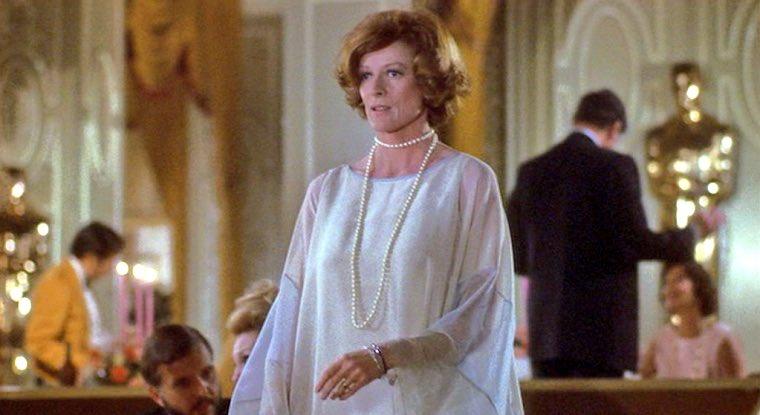 California Suite: Even a mediocre vacation can yield numerous pleasures … and so can a mediocre vacation movie. Take, for example, this 1978 comedy from director Herbert Ross and screenwriter Neil Simon. Adapted from the playwright's Broadway hit, it's a series of sardonic vignettes involving five couples in the same Beverly Hills hotel, and it's front-loaded with everything I generally can't stand about Simon's pre-Brighton Beach Memoirs output: the constant wisecracking; the blitheness that leads to sappy sentiment; the fact that every damned character, as written, sounds exactly the same. Yet man alive does this thing have a dream cast to make the most of Simon's relentless flippancy. The “Visitors from Chicago” segments may be burdened by distractingly painful slapstick and an overall air of mean-spiritedness, but Richard Pryor delivers dazzlingly aggrieved readings, and he's given able support by Sheila Frazier, Gloria Gifford, and (gulp!) Bill Cosby. The “Visitors from Philadelphia” narrative may be a sub-par bedroom farce with rather unpleasant undertones, but Walter Matthau is an admirable schmuck, and no one does deadpan outrage quite like Elaine May. The “Visitors from New York” storyline may be unduly superficial and too neatly resolved, but Jane Fonda nails her many, many bitter punchlines and Alan Alda appears content, performance-wise, to let her mop the floor with him. And the “Visitors from London” section, with its queasy sexual politics, may end with disappointingly forced melancholy, but Michael Caine and Maggie Smith are a dream of a bickering, bantering married couple, the latter performer so phenomenally funny she can score laughs simply through her bizarre pronunciation of the word “bizarre.” By the way, Smith plays an actress who's visiting California because she's been nominated for an Oscar – an award she subsequently loses. For California Suite, Smith herself deservedly won an Oscar. Talk about bee-za-a-a-are.

A Midsummer Night's Sex Comedy: I know, I know: First a movie co-starring Bill Cosby, and now one co-starring Woody Allen. I swear I'm not trying to make this article intentionally discomforting. But if I'm going to cover late-20th-century comedies in these home-viewing pieces, Allen's name is just naturally going to pop up … even if this 1982 release doesn't traditionally pop up on lists of the writer/director's most significant endeavors. This one, however, is blissfully insignificant – not only a comedy about people on vacation, but one that, for its time, was its own vacation from Allen's contemporary urban angst-fests. A cheeky, breezy take on Ingmar Bergman's 1955 masterpiece Smiles of a Summer Night, this endearingly lightweight farce is set in 1906, and sends Allen, screen wife Mary Steenburgen, and four guests off to the upstate-New-York countryside where several characters become romantically entangled with lovers other than the ones they arrived with. Typing the last part of that sentence, and especially with Allen's name attached, I realize I'm probably making A Midsummer Night's Sex Comedy sound skeevier than it is. In actuality, it's a frothy, pastel-colored delight, as bucolic and chipper as Allen's previous outing Stardust Memories was edgy and bleak; cinematographer Gordon Willis, of The Godfather and All the President's Men fame, must have relished those sun-drenched great-outdoors shots after a career that so often found him playing in the dark. And even though there's plenty of auteur-specific comic neurosis on display, the actors' relaxed rhythms soften the eccentricity, allowing Allen, Steenburgen, José Ferrer, Julie Hagerty, Tony Roberts, and Mia Farrow to emerge as a terrifically likable, sharp-witted ensemble. For what it's worth, this was Farrow's first of her 13 movies with Allen, and we all know that particular partnership didn't result in a happy ending. Allen's movie sure does, though. 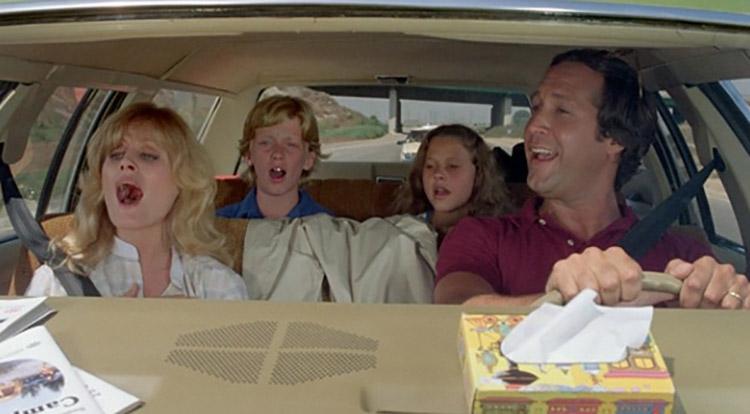 National Lampoon's Vacation: This past March, a buddy of mine took his wife and kids on a long-planned road trip to Disneyland. After days of travel, they finally landed at the Magic Kingdom, and were allowed one whole day there before COVID-19 shut the park down. That poor guy. I'm glad his family was granted at least a few hours in the happiest place on Earth, but he was this close to being Clark Griswold. Having watched the film about a zillion times on cable in the '80s, it's been a while now since I've returned to National Lampoon's Vacation, and I'm not sure how director Harold Ramis' and screenwriter John Hughes' 1983 humor holds up in these more politically correct times. That male-fantasy subplot involving Christie Brinkley probably hasn't aged well, and the icky incest punchline delivered by Randy Quaid's teen daughter Jane Krakowski (!) certainly can't have. But for everything potentially cringe-y about Ramis', Hughes', and star Chevy Chase's subversive, borderline-nasty slapstick – and beginning with Lindsey Buckingham's dementedly catchy opening-credits tune “Holiday Road” – there are about a dozen things in this franchise starter that make me either grin or laugh out loud. Beverly D'Angelo, with her beleaguered maternal patience. Dana Barron and the pre-Sixteen Candles Anthony Michael Hall as the Griswolds' wisenheimer kids. Eugene Levy's car-salesman smoothie talking Clark into his purchase of a family truckster. The ultimate fate of the dog Dinky. The ultimate fate of Imogene Coca's repellant Aunt Edna. Brian Doyle-Murray's campground clerk telling Clark, “We like to send out a mailer.” The three-second view of the Grand Canyon. And, of course, the Griswolds' arrival at Walley World that leads to John Candy blubbering and Clark losing what was left of his mind. Road trips rarely get worse than Vacation's. They rarely get funnier, either. 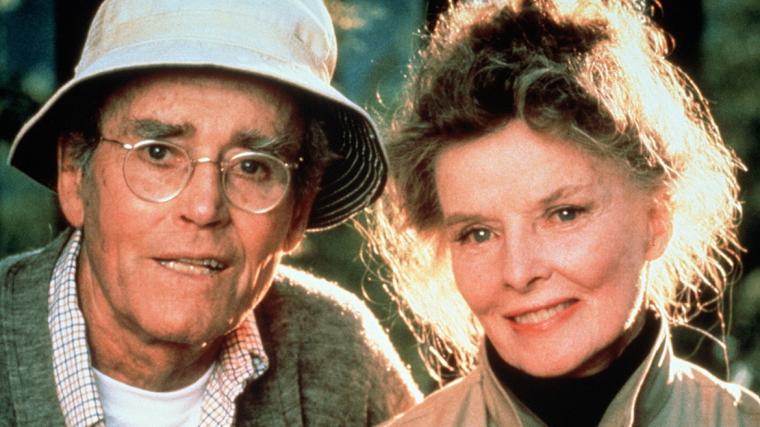 On Golden Pond: When I first saw this beloved comedy-drama in the winter of 1981, I forged an immediate personal bond with the film, given that, because they were roughly the same age, it was easy to imagine aging retirees Ethel and Norman Thayer as my own grandparents. Watching it nearly 40 years later, I still feel emotionally connected to the movie, but this time it's because Ethel and Norman are my parents' age. I shudder to imagine how I might feel about this thing, God willing, 40 years from now. But for the moment, even though the film gets somewhat harder to watch on an annual basis, I still very much love director Mark Rydell's and screenwriter Ernest Thompson's triple Oscar winner, a stage adaptation that would be deeply enjoyable and affecting even it wasn't such a treasure trove of Hollywood history. Considering it marked the first (and final) time Katharine Hepburn and Henry Fonda ever worked together – she at 74, he at 76 – On Golden Pond was almost instantly iconic, and definitely adored; I can still hear our 1981 auditorium's loud laughs when the couple started squabbling in their spacious New England vacation home, as well as the sniffles when it looked as though Norman might not make it to the end credits. But while their hilarious, touching rapport continues to astound, the movie was, and is, no less essential for being the first/only shared screen experience for Henry and daughter Jane Fonda, whose famously complicated real-life relationship was effectively mirrored in Norman's uncomfortable dealings with daughter Chelsea. Their hug near the finale slays me every time. But then so does Hepburn's “knight in shining armor” monologue. And her fully-dressed dive into the pond. And Henry Fonda's every utterance of “bullshit.” Rarely has salty dialogue sounded so sweet.