I Love You, Honey Bunny: Timeless Releases from the Fall of '94 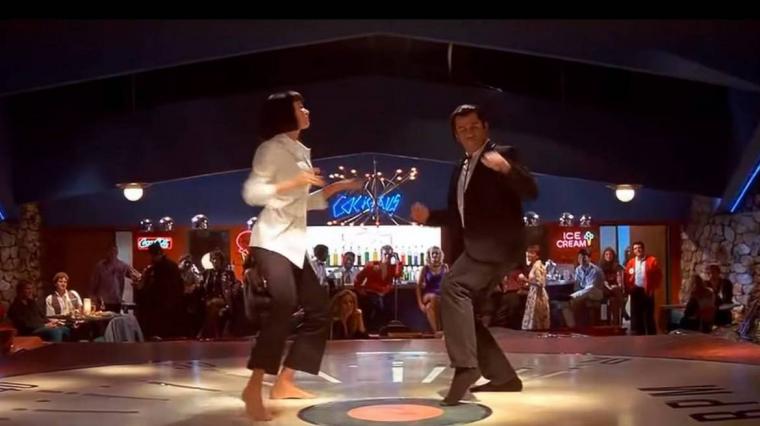 In November of 1994, years after we three graduated, I had an outdoor meeting in the District of Rock Island with two friends from Augustana College – Reader publisher/co-founder Todd McGreevy and then-arts-editor Jeff Wichmann – about potentially starting a movie column for their year-old indie paper. Having likely remembered me blathering on and on and on about movies whenever we were at a party (yeah, I was très cool back then), they asked if I might be interested in eventually reviewing new films for the Reader. I was floored and stoked, and immediately said yes. I remember also thinking: Where were you last month? I had so much to write about then!

Different seasons bring with them different types of releases: blockbusters in the early summer months and around Thanksgiving and Christmas; lightweight, mostly forgettable fare in the spring; nothing at all worthwhile between mid-August and Labor Day. (I'm open to arguments, but seriously, that's always been a cinematic dead zone.) Autumn, meanwhile, is when the good stuff really starts to land – and between September 30 and October 14 of 1994, the good stuff landed hard.

Last fall, I saw Parasite, Jojo Rabbit, and Pedro Almodóvar's Pain & Glory on the same weekend, which was unbelievable. Yet not long after autumn's launch in '94, five infinitely re-watchable films, all of which I saw in theatres, hit this area over 15 days – a collection of titles that went on to earn 27 Oscar nominations (a third of them for acting) and four wins, and that I recently returned to pre-pandemic just because they're like potato chips for me: If I'm having one, I'm probably having five.

Had I been hired at the Reader just a few months earlier than I was, you would've gotten full accounts of their greatness then. Abbreviated accounts now will have to suffice. So in order of my having viewed them … and I think I'm right about the order … . 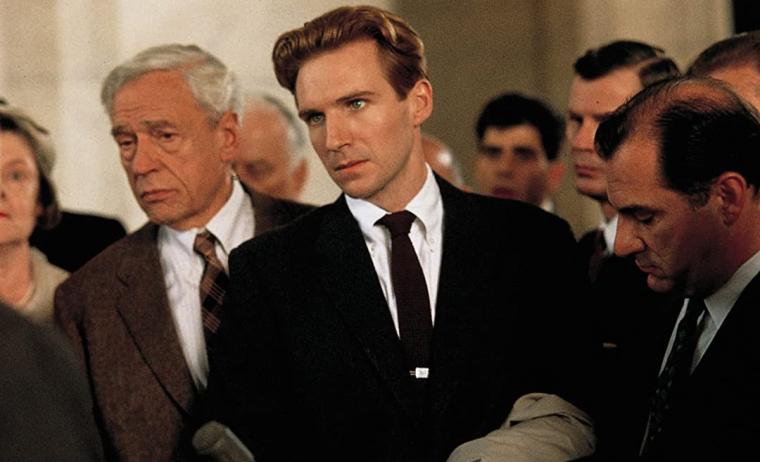 Even though Robert Redford was directing, it didn't seem like a release guaranteed to set the box office on fire: an exposé on a largely forgotten TV scandal involving a rigged game show from the '50s, with its cast headlined by John Turturro (then best known for playing assholes in Spike Lee and Coen-brothers movies), Rob Morrow (wrapping up his run as Northern Exposure's Joel Fleischman), and Ralph Fiennes (familiar only as the most sadistic of the Schindler's List Nazis). But when Redford's period procedural consequently didn't set the box office on fire, critics were shocked anyway – probably because they'd actually seen the movie and couldn't fathom how something this smart, funny, exciting, moving, and colossally entertaining could possibly be ignored. Twenty-six years later, and among considerable competition, it's still the 1994 title I most frequently revisit, so narratively engaging yet so soothing in its professionalism and control that watching it is like reading a juicy historic nonfiction from the comfort of a warm bath. Turturro, Morrow, and Fiennes, composing perhaps the most artfully balanced trio of leads prior to the Colman/Stone/Weisz triumvirate of 2018's The Favorite, are all excellent, with Fiennes – playing notorious Twenty-One cheater Charles Van Doren – a particular revelation. Quiz Show, however, is successfully stolen by its supporting cast, with Scofield wry and heartbreaking as Van Doren's father, Mira Sorvino sensible and forceful as Morrow's wife, Martin Scorsese a fast-talking hoot as the president of Geritol (!), and additional roles and cameos for David Paymer, Hank Azaria, Christopher McDonald, Elizabeth Wilson, Griffin Dunne, Barry Levinson, and, for two whole sentences, Ethan Hawke. The screenwriter, by the way, is Paul Attanasio, who spent three years in the '80s as a film critic for the Washington Post. See? We reviewers do demonstrate talent at times! 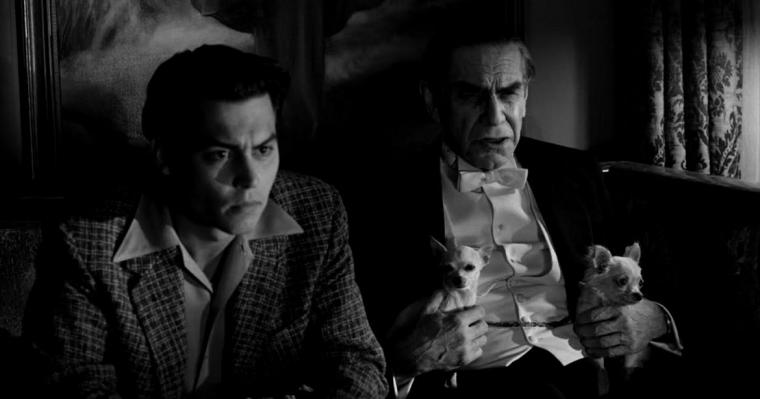 As a movie-mad middle-schooler in 1980, I was obsessed with The Golden Turkey Awards, Harry and Michael Medved's book detailing the worst films, performers, and cinematic moments of all time. It was sublimely, exhaustively, hilariously bitchy, and I was especially absorbed by the Worst Picture and Director citations, which went to Edward D. Wood Jr.'s Plan 9 from Outer Space. I finally saw this legendary sci-fi debacle from 1959 at a hometown “All-Time Turkeys” film fest in 1981, where it promptly lived up/down to all my lowest expectations. As for Tim Burton's cheeky Wood bio-pic, it landed 13 years later, and with apologies to The Disaster Artist, it remains the best movie about an awful movie – several of them, actually – ever made. Like Quiz Show, Buton's comedy crashed and burned upon wide release, sustaining the popular mid-'90s theory that while most everyone liked Johnny Depp, almost no one was willing to pay money to watch him on-screen. Needless to say, that changed. But what hasn't is Ed Wood's reputation as one of Depp's and Burton's most inspired collaborations – a celebration of marginal, misguided, and just-plain-untalented Hollywood folk boasting gorgeous black-and-white cinematography, reams of delicious anecdotal tidbits, and a stellar cast including Sarah Jessica Parker, Patricia Arquette, Jeffrey Jones, Max Casella, Vincent D'Onofrio (channeling Orson Welles), and, as an aging bit player desperate for gender-reassignment surgery, an endearingly fey Bill Murray. None of them, however, is a match for Landau, whose portrayal of Bela Lugosi in his waning, drug-addled years is both harrowing and incandescently sweet. As for Depp's tremendous titular performance, his angora-wearing heterosexual transvestite could be the poster child for senselessly unbridled optimism, with Wood never looking happier than when terrifying a bunch of trick-or-treaters by removing his teeth. The kids shriek. We shriek with laughter. 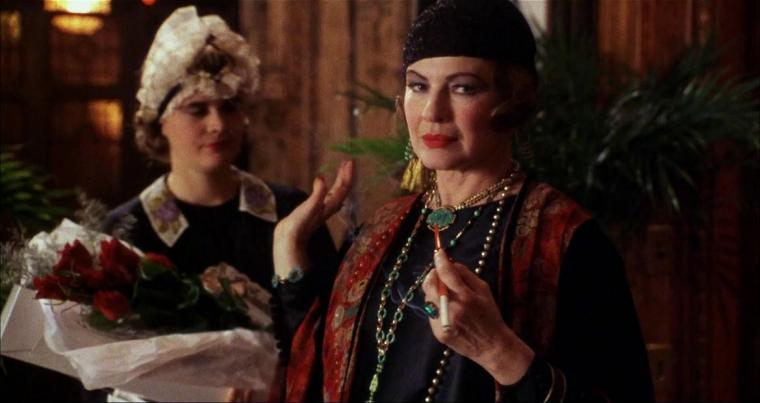 If you were around during that era, you probably don't need to be reminded that the mid-'90s weren't exactly the best of times for Woody Allen. Somehow, though, amidst the tabloid headlines and ugly child-custody battle and disapproving looks you'd get if you dared mention loving his work (if not his personal life), the filmmaker delivered some of his most purely pleasurable releases: Manhattan Murder Mystery, with Woody's and Diane Keaton's playful squabbling suggesting an alternate-reality Annie Hall; Mighty Aphrodite, a triumph for Oscar winner Mira Sorvino as a helium-voiced hooker; Everyone Says I Love You, Woody's musical in which Edward Norton sings passably and Goldie Hawn literally dances on air. Best of all was Bullets Over Broadway, a rip-roaring roaring-'20s charmer about gangsters and show biz and the potentially fatal consequences of murdering a playwright's lines. As the writer/director doesn't appear in this one (and you may be relieved to hear that), the prototypical Woody Allen role is instead assumed by John Cusack, who does a decent-enough job with it. The actors surrounding Cusack, however, are glorious, and happily for us, only a few of them are playing anything close to sane. (You know a movie world is askew when its most “normal” character is portrayed by the reliably eccentric Mary-Louise Parker.) After a quarter-century-plus, I can still while away the hours enjoying Jim Broadbent's friendly, increasingly rotund Broadway ham and Tracey Ullman's dog-loving, oddly middle-aged ingénue; Joe Viterelli's soft-spoken mob moss and Tilly's squawking, inept chorus girl; Rob Reiner's bohemian blowhard and Palminteri's tortured-artiste bodyguard. And words fail me when it comes to Wiest's unforgettable stage diva Helen Sinclair, whose every simpering reminiscence and barked proclamation drips with a hearty blend of ego and gin. I'd say more, but ya know … . Don't speak. 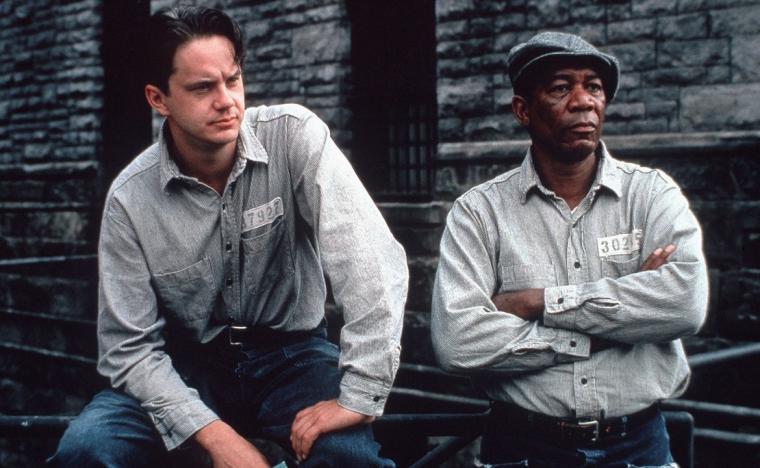 Who doesn't love The Shawshank Redemption? Okay, that's a dumb question, as I can personally point you to a number of critics – and a surprising number of friends – who really, really don't. But even though I'll readily concede the movie's sentimentality and narrative repetitiveness, you're also not going to hear me openly diss writer/director Frank Darabont's sensationally watchable prison bromance. It's Field of Dreams with a shiv. Astoundingly, there actually was a time in which Morgan Freeman narration wasn't an invitation to roll your eyes. And from the moment his (guilty) convicted killer Red begins to mellifluously recount the tale of Tim Robbins' (innocent) convicted killer Andy, Freeman's warmth and wit cascade over those superbly shot Roger Deakins jail-yard images, luring you in with hypnotically commanding smoothness. From then on, it's a slow boil as we approach the blessedly inevitable, and because I can't imagine anyone reading this article who hasn't seen the film, you know the highlights: Andy making an unexpected ally, and getting revenge on a tormentor, through his accounting skills; the prisoners stocking the new library with how-to books and novels by “Alexandry Dumbass”; Gil Bellows arriving as a hipster newbie; James Whitmore enacting Crooks' heartrending final days; Bob Gunton's warden and Clancy Brown's guard getting their just desserts. (I also adore the last shot, and got in a fight about it with my then-roommate who considered it an affront to Stephen King's original text. Maybe it is. I don't care.) But if you haven't seen the film for years, it's worth watching again, now, for the scene of Andy, Red, and the gang drinking beers from the prison rooftop at sunset – as moving a suggestion of freedom during mass incarceration as any I've seen. These days, who isn't in the mood for that? 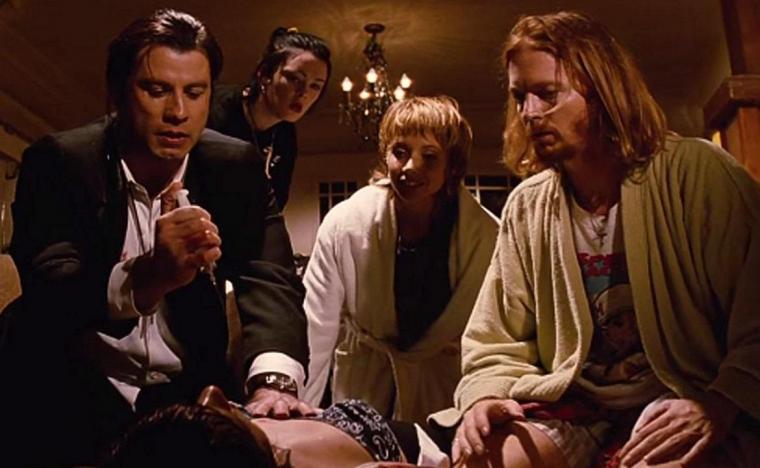 It says something about the fall of '94 that The Shawshank Redemption – currently the top-rated title on the Internet Movie Database – was only the second-most iconic release that season. The most iconic, obviously, was Quentin Tarantino's signature creation, a genre-hugging blast so original and satisfying that even audiences who collectively ignored Quiz Show, Ed Wood, Bullets Over Broadway, and Shawshank couldn't resist buying tickets. For those who, bizarrely, haven't yet caught up with Pulp Fiction, I should probably avoid spoilers and not discuss you-know-who's upsettingly early demise or what's-his-name's casual killing of you-know-who or who-know-who's astonishing resurrection. Suffice it to say that, while the film led to loads of imitators, no one had previously seen anything quite like Tarantino's cheerful exploding of convention (and brains), and the film has become such a deserved figure of pop-culture immortality that you can successfully suss out dyed-in-the-wool movie geeks from amateurs based on how readily they're able to launch into Christopher Walken's three-minute monologue about the watch. It's easy to reflexively hate Forrest Gump for netting the Picture and Directing Oscars that rightfully belonged to Tarantino's pitch-black comedy. At the time, though, we were just thrilled it got invited to the party. And besides, the relative lack of awards recognition (not counting the freaking Palme d'Or at Cannes!) has done nothing to diminish the crazy delight of Tim Roth's and Amanda Plummer's diner repartee, or Travolta's and Thurman's twist, or Bruce Willis taking a bi-i-it too long to save an acquaintance, or Harvey Keitel in a morning tuxedo, or Jackson's monologue detailing how he's trying real hard to be the shepherd. Seconds after Thurman gets her famed shot-to-the-heart of adrenaline, Rosanna Arquette's heavily pierced Jody says with a grin, and then a chortle, “That was f---in' trippy.” It still is.