A Hundred-Plus Reasons to Go to the Movies 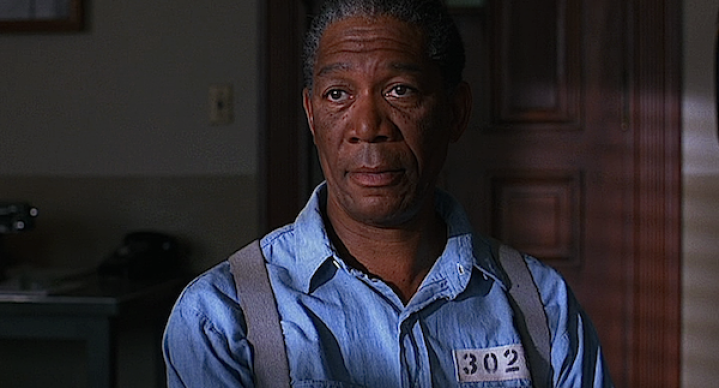 Morgan Freeman in The Shawshank Redemption

My first article for the River Cities' Reader appeared in Issue 19, way back in March of 1995. (You know how long ago that was? Tom Hanks had only one Oscar.) Serving as the Reader's film critic was, and still is, a terrific gig - for an avowed movie fanatic who loves to write, the chance to expound on the state of cinema has always been about more than giving a particular work a "yay" or "nay" vote; it's given me, in a minor way, the opportunity to analyze an entire culture, to try to understand what's in the heads of those who make films, and those who distribute films, and the millions of us who view them. My tenure at the Reader has been such a dream come true that in the early months of 1995, friends who had been subjected to my endless ramblings about Movies and What They Meant couldn't believe my good fortune - "You get to see movies every week and they're going to pay you?!" - and, honestly, neither could I.

Since the publication of that first article 482 issues ago, I've reviewed 955 feature films and incorrectly predicted the major Academy Award winners eight out of 10 times; I've witnessed the closings of multiplexes in Davenport and Milan and the openings of Showcase 53, the Puttnam's IMAX theater, and Rock Island's Brew & View; I've seen the birth of full-length computer-animated works and watched as independents such as The Passion of the Christ and Fahrenheit 9/11 turned into box-office phenomena. And as my near-decade of movie-critiquing reaches this, the Reader's 500th issue, a funny thing has happened: I'm no longer the envy of my friends.

It would be hard to argue that movies are worse than they were 10 years ago; the art of screen acting is probably as good as it ever has been, and even works that you hate are, in general, at least technically accomplished. Yet more and more, when I tell people what movie I'm off to or what film I've just returned from seeing, the reaction I get is, "Oooo ... I'm sorry ... ," and they genuinely mean it. Once upon a time, and not that long ago, Hollywood's advertising wizards had a knack for making almost any new release look good, or at least promising; during most previews now, you can feel a collective sense of ennui in the movie theater, followed by that awkward silence as the trailer ends, and you glance at your movie-going companion with a look of "We don't have to see that, do we?" The problem with most Hollywood releases in this first part of the 21st Century isn't that they're bad, though many of them certainly are that. It's that they all feel the same. Younger moviegoers - the ones who have made the moderately-clever-but-nothing-special Shrek 2 the third-highest-grossing movie of all time - might not necessarily notice this sameness; it's all new to them. But what is an adult cinephile to do when faced with Sandra Bullock's umpteenth romantic comedy, when she outgrew her helpless-waif shtick at least seven years ago? Or yet another adaptation of a comic book you've never heard of? Or, God help us, Ben Affleck in Surviving Christmas?

Before proceeding, I should go on-record as saying that, in nearly 10 years, my editors at the Reader have never dictated which movies I should or shouldn't review (which is one of the most appealing aspects of the job), so it's actually by choice that I sit through swill such as The Whole Ten Yards and Wicker Park and A Cinderella Story. But I'm of the mind that you can't fully get a grasp on an art form unless you endure the garbage, too, especially if you want to truly appreciate the great works. (If your only knowledge of theatre came in the form of Shakespeare, would you then consider Romeo & Juliet or As You Like It to be, especially in comparison to the rest of the Bard's output, pieces of crap?) Besides, by seeing nearly everything that gets released, I'm occasionally surprised by movies I just assume will suck; had I skipped Kill Bill: Volume II, which I desperately wanted to - I hated Volume I - I would have missed out on one of my absolute favorite movies of the year.

Still, it's easy to empathize with audience apprehension; nobody wants to be disappointed again. So why still go to the movies?

Because they're filled with promise, and that promise is based on your knowledge of what filmmakers and performers have done before, and your hopes about what they will accomplish now.

For me - and I doubt I'm in a minority here - the older I get, the more personal the film-going experience becomes. Like friends whom you love even when they piss you off, there are enough creative forces out there to always pique your interest, even if they sometimes let you down. (Don't believe "objective" critics who claim they don't have favorites. They're lying.) Since starting at the Reader, I've become enamored with a whole slew of filmmakers: Richard Linklater, Paul Thomas Anderson, Christopher Guest, Todd Haynes, Spike Jonze, Peter Jackson, Sofia Coppola, and Bryan Singer, not to mention directors - most of them writer-directors - whose work I had greatly admired beforehand: Woody Allen, David Lynch, Joel and Ethan Coen, Spike Lee, Quentin Tarantino, Kevin Smith, Peter Weir, Cameron Crowe, Michael Moore, Mike Nichols, Steven Soderbergh, Gus Van Sant, Tim Burton, David Fincher, Terry Gilliam, Barbara Kopple, David Mamet, Michael Mann, Jane Campion, Errol Morris, Ang Lee, Alfonso Cuaron, and Sam Raimi. (And, yeah, Spielberg and Scorsese and Altman, too. Duh.) Plus, there's a whole slew of new filmmakers whose next works I can't wait to see, including Richard Kelly, Andrew Jarecki, Christopher Nolan, Darren Aronofsky, Catherine Hardwicke, Tom McCarthy, and Mark Pellington.

And, of course, there are the performers. Even when our writers and directors fail us, nearly every American movie that gets released features someone whose mere presence makes you smile, not only for the anticipation of the good time they'll provide, but in remembrance of the many good times they've given you in the past. Among male actors, I'll easily sit through anything with Morgan Freeman, Sean Penn, Johnny Depp, Daniel Day-Lewis, Billy Bob Thornton, Kevin Spacey, Philip Seymour Hoffman, Bill Murray, or Russell Crowe, and directly behind them are talents such as John Cusack, Tim Robbins, Jeff Bridges, George Clooney, Jim Carrey, Steve Buscemi, William H. Macy, Samuel L. Jackson, Ed Harris, Hank Azaria, Delroy Lindo, Ethan Hawke, Jude Law, Edward Norton, Paul Giamatti, Jim Broadbent, Christopher Walken, Jeffrey Wright, Ian McKellen, Ewan McGregor, Eugene Levy, Jack Black, Barry Pepper, Hugh Jackman, Steve Zahn, Bruce Campbell, and the combined inspiration of Ben Stiller and Owen Wilson, all of whom I admire beyond measure.

Beyond these established performers, the current talent pool of those aged 30 or younger is rather staggering. I'm thrilled to see Tobey Maguire, Jake Gyllenhaal, Adrien Brody, Christian Bale, Peter Sarsgaard, Joaquin Phoenix, Topher Grace, and Kieran Culkin in just about anything, and the list of gifted female actors who are 30 or under is even more impressive; Kirsten Dunst, Christina Ricci, Kate Winslet, Natalie Portman, and Scarlett Johansson are wonderful, to be sure, but I'm also in thrall to the talents of Anna Paquin, Natasha Lyonne, Maggie Gyllenhaal, Zooey Deschanel, Fairuza Balk, Jena Malone, Clea Duvall, Sarah Polley, Samantha Morton, Eva Amurri, Zhang Ziyi, Michelle Williams, and Evan Rachel Wood, to name just a baker's dozen.

There you have it. 141 reasons to keep frequenting the cineplex. And 141 reasons why this is still, after nearly a decade, the coolest job imaginable.

Now it's time for me to catch - ugh - Surviving Christmas.