I'll Have What They're Having: Five Unmissable 1980s Rom-Coms 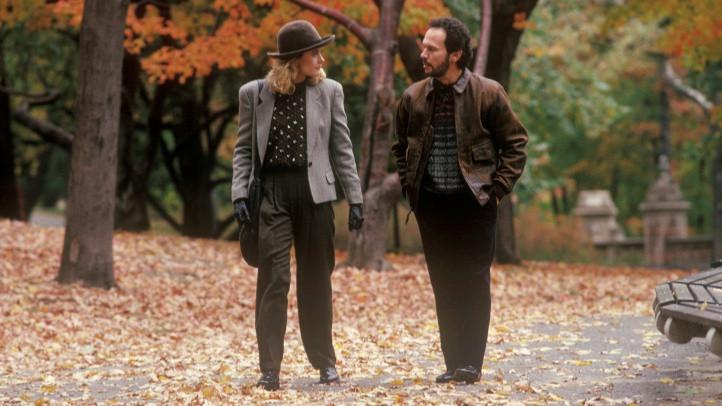 Meg Ryan and Billy Crystal in When Harry Met Sally ...

Recently, while scrolling through Facebook, I came across a post from a 20-something friend of mine who said he'd just watched 1982's Tootsie for the first time, probably as a result of the film finally streaming through Netflix. (He also said he was wearing a Chewbacca onesie while watching it, but I don't judge.) And I thought, yes! You should watch Tootsie, dude! It's amazing! And then, of course, I had to watch Tootsie again.

But then, I began reflecting on how the 1980s may have been the finest decade for adult (or at least adult-feeling) romantic comedies in my lifetime – and maybe since the days in which Katharine Hepburn and Cary Grant and company were killing it on a regular basis. Don't get me wrong: There were a lot of genre losers released in the '80s. (You may have scrolled past them in your streaming searches for something decent from that era.) But if you, too, find yourself in a Chewbacca onesie looking for a great rom-com – or rom-com-adjacent – option from that totally bitchin' period, here are five of my favorites. 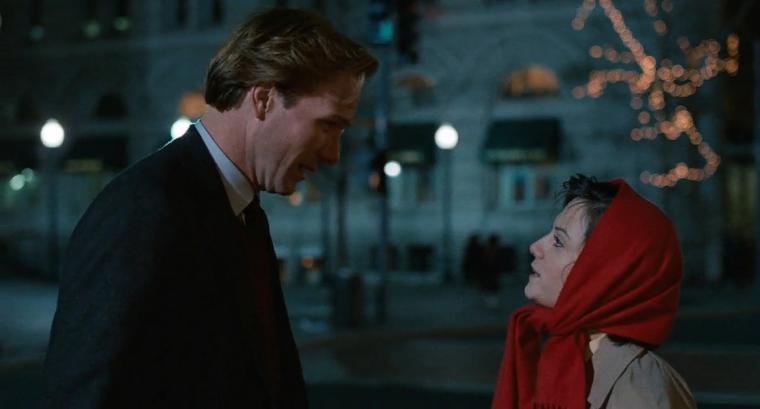 Broadcast News: I've watched this sublime paean to TV journalism – writer/director James L. Brooks' follow-up to Terms of Endearment – innumerable times since its 1987 release, and it's the strangest thing: Before each viewing, I always seem to forget it's a romantic comedy. That's partly because it's more accurately a workplace comedy in the vein of Brooks' Mary Tyler Moore Show, and one overflowing with unimprovable bits: Joan Cusack's mad dash to deliver a videotape on time; Holly Hunter, from the producer's booth, whispering factoids into anchor William Hurt's ear; Albert Brooks' copy writer, in his first on-camera appearance, perspiring through his suit. (“There were complaining phone calls because you were sweating?” “No – nice ones! Worried that I was having a heart attack.”) But few movie moments of that decade are as swoon-worthy as Hunter and Hurt enjoying their long-delayed first kiss while Bill Conti's score swells beneath them, and few are as devastating as Albert Brooks' romantic declaration to best pal Hunter, who responds with a reflexive flinch, as though she'd just been burned. (They both had.) Although Broadcast News is a just-about-flawless 130 minutes, I would've gratefully watched season after season of its three leads playing out their alternately hilarious and heartbreaking relationship triangle in sitcom form, fighting with friends over which couple would make the better match, or whether Hunter should just ignore both guys and focus solely on her primary love: her career. Not to ruin things for those who haven't caught up with the film (an even finer one, I think, than Terms), but because it's a romantic comedy, all three get a Happily Ever After at the end. Because it's a brilliant romantic comedy, it also ends with you wondering whether these people you've grown to adore could have been happier still. 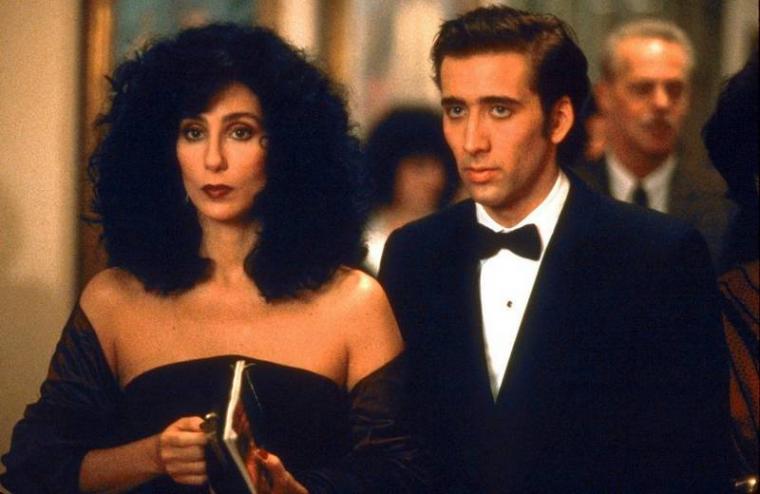 Moonstruck: Remember Cher? She's still around, of course, still fabulous, and still, occasionally, in movies. (Playing Meryl Streep's mom, but whatever … .) For those of you who recall the period, though: Remember Cher in the mid-1980s? When she did Silkwood and Mask and The Witches of Eastwick and this Norman Jewison gem that won her an Oscar? Man, those were the days (he said ruefully yet stupidly). And Moonstruck is a those-were-the-days movie like nobody's business – a wise, warm, endlessly funny verbal (and sometimes physical) slapstick that's such a romantic comedy that about a dozen of its characters seem to be starring in their own separate versions of one. Its most prominent romance is the one between Cher's widowed bookkeeper and Nicolas Cage's butcher-shop employee, and from Cage's “I lost my hand! I lost my bride!” to Cher's double-slap and demand for him to “Snap out of it!”, these two create dazzling rom-com fireworks. (When Cage tells Cher that love isn't “perfeck,” you find yourself thinking maybe not – but these two sure are.) With Jewison directing John Patrick Shanley's Oscar-winning cornucopia of a script, however, this thing plants love stories all over the place. The one between Olympia Dukakis (yet another Oscar winner) and Vincent Gardenia. The one between Gardenia and Anita Gillette. The one between Cher and Danny Aiello. The one between Aiello and his mother. (It's a long story.) The one between Julie Bovasso and Louis Guss. The one-sided one between John Mahoney and Dukakis. The one-sided one between Nada Despotovich and Cage. The one between those two wine-store cashiers, for Pete's sake. And probably the most reciprocal love story of all: the one between the 80-something Feodor Chaliapin Jr. and his many dogs that he teaches to howl at the moon. Now that's amore. 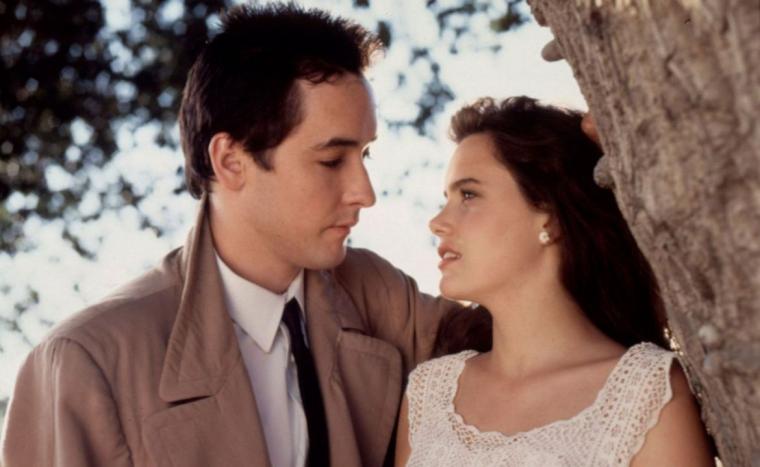 Say Anything …: I was tempted to begin by referencing John Cusack and his boom box and just leaving it at that. Seriously, among romantic comedies released in the last 40-ish years, is there a more memorable image than Cusack's recently dumped Lloyd Dobler, in his iconic trench coat, hoisting that ancient playing device over his head in an attempt to get Ione Skye's Diane Court to talk to him? And is there a more potent moving image, in the 1989 film itself, than writer/director Cameron Crowe slowly pulling in for a closeup as Peter Gabriel's “In Your Eyes” underscores Lloyd's expression that's equal parts adamant, pleading, hopeful, pathetic, and longing? Yet beyond that example of screen perfection, Crowe's incredibly funny and smart directorial debut is an ideal high-school rom-com because, for its genre, it gives you everything: the initial flush of infatuation; the petrified asking-you-out call; the antsy first date (in a group setting); the eventual relaxation; the early bliss; the moment things Suddenly Get Serious; the deep affection; the realization that maybe things got Too Serious Too Quickly; the breakup; the depression; the desperation; the desperation so deep that you hang with a bunch of convenience-store yahoos just to talk about it. (Okay, that one's pretty specific, but it is a great scene.) Lloyd's and Diane's journey is beautifully evinced by Crowe and his stars as backed by a ridiculously strong supporting cast – Lili Taylor! Jeremy Piven! John Mahoney and Joan Cusack! Again! – and if your partner doesn't like Say Anything … . I'm sorry, but you really should consider other options. My brother and sister-in-law, by the way, chose “In Your Eyes” as the very first song they danced to as a married couple. Their 19th anniversary is on Tuesday. Lloyd would be touched. 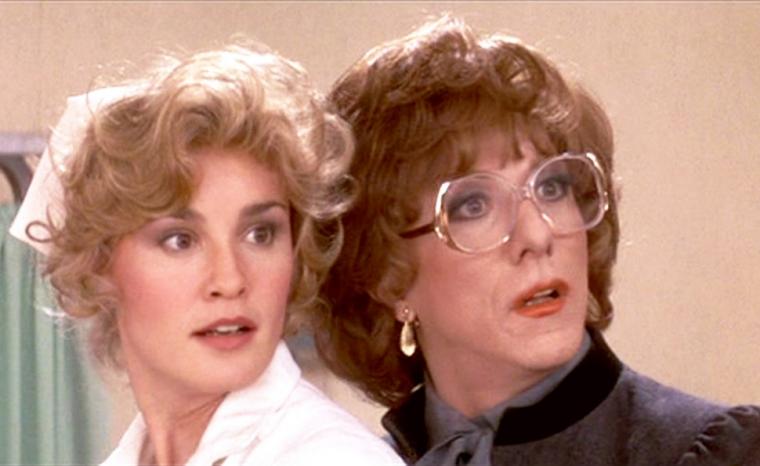 Tootsie: As with Broadcast News, I'm kinda cheating on the film's inclusion here, because its romantic-comedy excellence is just part of what makes director Sydney Pollock's human-scaled farce a classic. And it's hardly a traditional rom-com in any regard, given that for almost its entire length, the female lead doesn't have any romantic feelings for the male lead. Like … at all. But let me set the scene. It's New Year's Eve, 1982. I'm seeing Tootsie for the first time with my buddy Brad, the son of my sister's godparents. (Our folks no doubt relished the excuse to get rid of us for a couple hours.) To this day, I have never heard or indulged in louder, longer laughs at a movie than I did at that packed screening in Rockford, Illinois. Absolutely everything worked: Dustin Hoffman's struggling actor Michael Dorsey interacting with platonic pal Teri Garr and roommate Bill Murray; the acting-in-drag-for-a-soap-opera-gig premise; Charles Durning as the friendliest of unlikely romantic threats. And then, amidst all the laughter, Jessica Lange would pop in as soap starlet Julie Nichols, and the crowd went almost silent in the best way imaginable. Lange's character, and certainly her Oscar-winning performance, gives the movie its soul. And while they were still funny, I remember, as a 14-year-old, thinking that Lange's scenes with Hoffman – whose Michael was so clearly in love with Julie even in his scenes as “Dorothy Michaels” – constituted the first truly grown-up romance I'd ever seen on-screen, especially in that gorgeous montage scored to Stephen Bishop's “It Might Be You.” (I did my best to make sure Brad didn't see me crying.) Tootsie is partly about the love between Michael/Dorothy and Julie. After it's over, it's more accurately about the love between you and the movie. 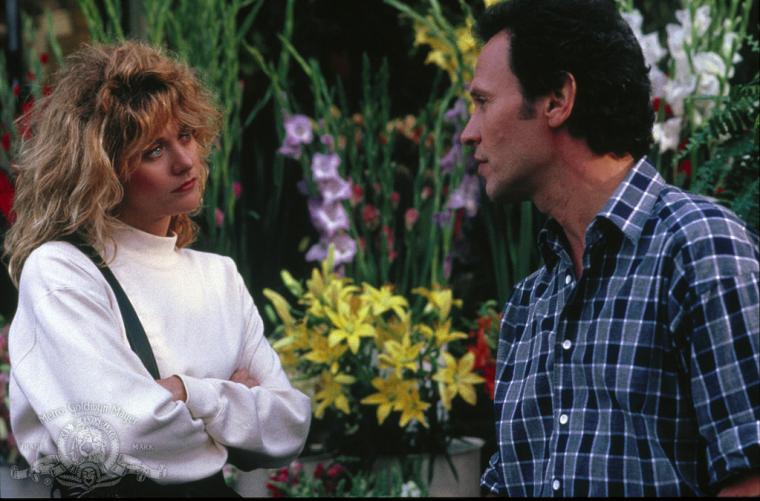 When Harry Met Sally …: What was with the 1980s trend of rom-com titles ending in ellipses? When Harry Met Sally …, Say Anything … . Were studios merely employing them as an enticement? (“About Last Night ... what? What about it? Will you tell me if I buy a ticket?!”) If so, in the case of this 1989 genre smash, it sure worked, causing generations of us to argue over whether (straight) men and women can ever truly be friends and putting “I'll have what she's having” in the pantheon of all-time-great punchlines. (As a movie-theater usher, I remember crowds roaring at that gag so hard that Harry Connick Jr.'s subsequent crooning was drowned out by laughs for half a minute.) Back in the day, at the height of my post-adolescent cinema snobbery, I had major issues with director Rob Reiner's and screenwriter Nora Ephron's Manhattan-based delight: Billy Crystal and Meg Ryan seemed too old as new college graduates; Crystal's readings sounded overly practiced; Ryan's crying jag felt forced; it was all too Woody Allen-lite for my tastes. Happily, though, tastes change, and when I recently returned to When Harry Met Sally …, I devoured it like a pint of Ben & Jerry's. I practically licked the spoon. The movie may be blithe, but it isn't glib; Ephron asks legitimate, even painful questions about the sense, of lack thereof, in pursuing romance with a longtime friend. And while they're both shrewdly, even calculatingly “on,” Crystal and Ryan do share fabulous chemistry (as do their invaluable co-stars Bruno Kirky and Carrie Fisher), keeping you grinning through inspired shtick ranging from Harry's astonishment at Sally's days-of-the-week underwear to “Waiter, there is too much pepper in my paprikash.” Crystal and Ryan appear to be having a ball. Maybe almost as much of one as we are.