I'm Not Gonna Be Ignored, Dan: Formative Performances from a Critic's College Years 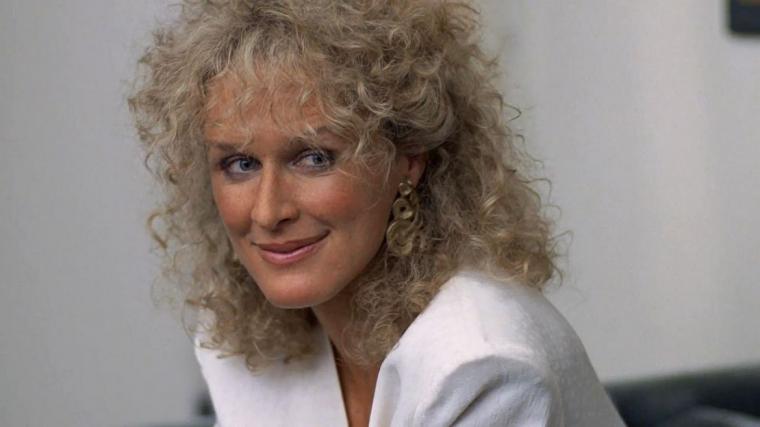 When you're in college, you learn to live without a lot of niceties you enjoyed for years as a kid: free food; free laundry; free someone-to-do-the-laundry. (Belated thanks, Mom, because it's still kind of an irritating chore.) And for two of my years as a student at Augustana College, I learned to live without TV. I had a TV, but didn't have cable, and the only snowy pictures I could get on my set were of whatever CBS happened to be airing. But the situation came with a perk, because that's when I truly went from being a movie fan to a movie obsessive. Though in reading that just now, I'm not entirely sure it was a perk … .

Nevertheless, not having an opportunity to watch new stuff, I watched old stuff – mostly videotapes of rented and purchased movies I relished that, through numerous repeat viewings, gave this theatre major a whole new appreciation for the art of acting. So in honor and celebration of college-senior theatre majors who are now graduating yet were denied the opportunity to enjoy one final send-off performance, allow me to guide you to five of my personal favorite film performances from the years in which I attended Augustana. All of the cited were Oscar nominees; two of them won; and each portrayal left an indelible imprint regarding the kind of actor I one day hoped to be. I'll letcha know if I ever get close. 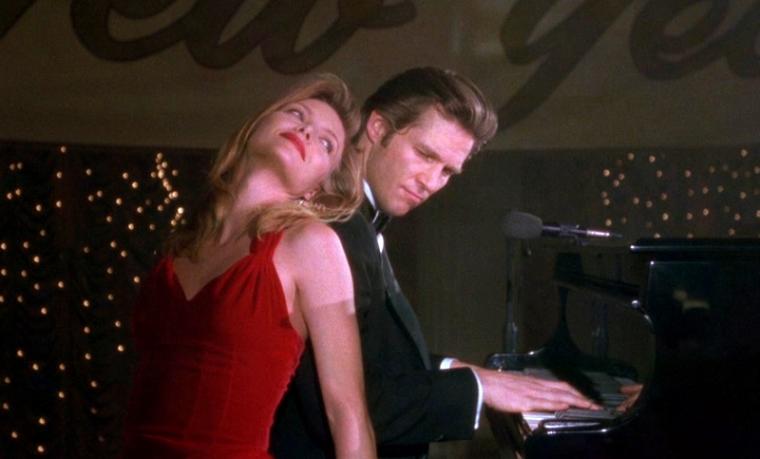 Michelle Pfeiffer in The Fabulous Baker Boys: “God damn it! Shit!” These are the first words we hear from Michelle Pfeiffer's Susie Diamond as she trips up the stairs (an hour-and-a-half late) on her way to a singing audition for sibling co-pianists Jack and Frank Baker. It's a gig she seems destined to not land after stating her entertainment experience: “For the last couple years I've been on call for the triple-A escort service.” Yet as soon as Susie finishes her slow, soulful rendition of “More Than You Know,” the awed silence is in its own way deafening: the sound of the Baker boys, and everyone in the audience, falling instantly and irrevocably in love. Pfeiffer was a significant film force in the 1980s, but writer/director Steve Kloves' comedy-drama suggested that she was also a force of nature. We knew that she could sing from Grease 2; that she could be funny from The Witches of Eastwick; that she could be poignant from Dangerous Liaisons. But until this smart, stylish 1989 winner debuted, it seemed too much to hope that Pfeiffer would ever croon, score laughs, and break hearts in the same picture, and we also couldn't have imagined that she'd steal the movie right out from under real-life brothers Jeff and Beau Bridges, who were making their first screen appearances opposite one another. Steal it she does, though, in the most complete distillation of Pfeiffer's talents to date. It's grand-piano larceny. Performance moments to savor: Pfeiffer's barely contained fury when Susie upbraids Jack for his lone-wolf posturing; her snort of who-cares derision when Susie tells Frank that the lounge-act mainstay “Feelings” is no longer part of her repertoire (and good riddance!); and Pfeiffer, undulating atop a piano in a shimmering red dress, making 1928's “Makin' Whoopee” sound like the filthiest, sexiest song ever written. 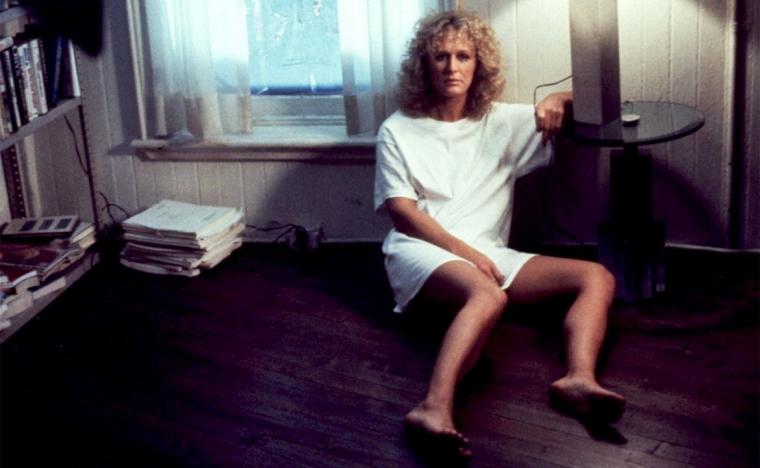 Glenn Close in Fatal Attraction: Does Glenn Close hate Meryl Streep? Not in any malevolent way, of course. But when Close, a Tony-winning theatre icon, sees Streep earning raves and Oscar nominations for stage adaptations of Doubt and August: Osage County and Into the Woods, don't you think a teensy part of her must be seething and thinking, “That shoulda been me”? After she amassed five Oscar nods of her own between 1983 and 1989, there was every reason to believe that Glenn would forever score as many juicy film roles as Meryl. Things didn't quite work out that way. Yet I'd argue that, despite her brilliance, Streep still hasn't given a performance as instantly iconic as Close's terrifying portrayal of Alex Forrest, the frizzy-haired, revenge-seeking, bunny-boiling sociopath in Adrian Lyne's psycho-sexual thriller. Viewed now, the 1987 release is most definitely problematic, inviting us to side completely with Michael Douglas' unfaithful hubby Dan and cower from Close's scorned, increasingly unhinged lover. It remains, however, a masterfully engrossing exercise in justifiable paranoia, and one boasting a Close performance that friends and I talked about for weeks (and saw at the cineplex twice in three days). After years of playing kindhearted souls, she was so magnetic, tragic, scary, and unexpected in Fatal Attraction that you could never again think of Close in the same way, much as you may have wanted to. But she's not gonna be igno-o-ored, Dan. Performance moments to savor: Close's wicked grin after Alex all but dares Dan to sleep with her; her serene expression and little-girl-lost voice as Alex inches toward the camera hiding newly slit wrists; and Close's unnerving confusion when Alex, butcher knife in hand, asks Dan's wife the last question you'd want to hear from a stranger in your bathroom: “What are you doing here?” 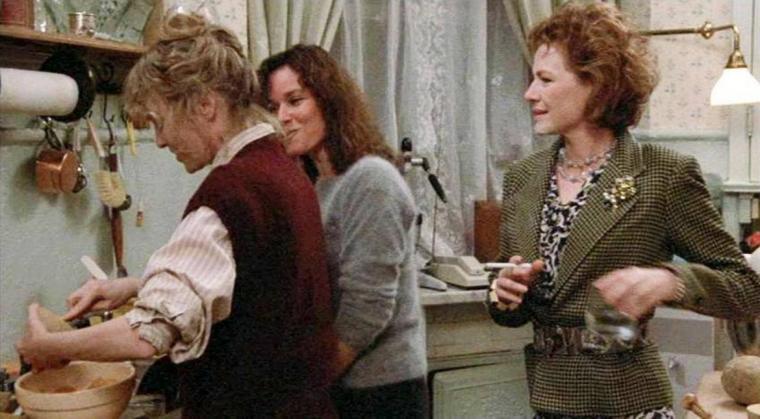 Dianne Wiest in Hannah & Her Sisters: Until she showed up as one of the title characters in Woody Allen's 1986 masterpiece, movie-goers had really only seen Dianne Wiest in a few low-budget films (including the writer/director's The Purple Rose of Cairo) and as John Lithgow's wife in Footloose. So it was a delight and revelation when the performer not only earned best-in-show honors amongst a cast that included Woody, Mia Farrow, Farrow's screen-legend mom Maureen O'Sullivan, Oscar winner Michael Caine, Barbara Hershey, Daniel Stern, and Max von freakin' Sydow, but appeared to create a brand-new comic archetype before our eyes. Neurotic but not crazy, dizzy but not stupid, self-deflating yet unwilling to quit, Wiest's Holly was an early-middle-aged ingénue with the soul of a tortured artiste. (After a particularly disappointing date, Holly, in voice-over, plans her evening: “Maybe I'll get into bed early, turn on a movie, and take an extra Seconal.”) She was also impossible to resist: so simultaneously funny, touching, desperate, and ridiculous – especially when passive-aggressively trying to be the last one dropped off after a night out – that the Academy Award Wiest received for Hannah & Her Sisters felt like one given to both the actor, because of how wonderful she was, and the character, because Holly clearly needed the boost. Unless it's with laughter, Woody Allen movies generally aren't designed to make you cry. This one does, and Wiest is the reason. Performance moments to savor: Wiest's interior monologue – initially snippy, ultimately resigned – as Holly stews over losing Sam Waterston to Carrie Fisher; her frustrated rage when Holly accuses Hannah of not supporting her right after hitting the woman up for money; and Wiest's giddy, choked-up happiness as Holly finally gets the encouragement she's long waited for: “God, you ... really liked it?!” We really, really did. 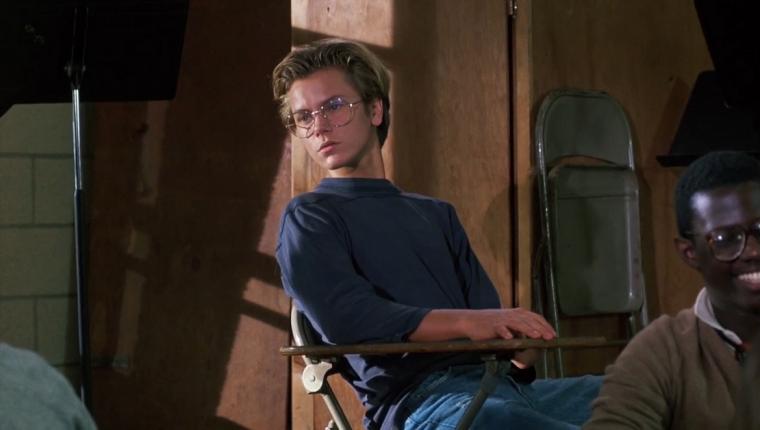 River Phoenix in Running on Empty: Thanks to John Hughes and a group of performers not-altogether-endearingly nicknamed “The Brat Pack,” there was no shortage of young stars in the '80s. One of them, though, was almost a decade younger than Emilio and Ally and the Robs Lowe and Downey – and perhaps more naturally gifted than any of them. He was, of course, River Phoenix, and those who know him only as a cautionary tale owe it to themselves to see the late actor at his finest in this absorbing, heartrending Sidney Lumet drama about former hippies – and, after one tragic decision, domestic terrorists – and their two sons hiding in plain sight. Friends and I, to say nothing of professional reviewers, were already well in the tank for Phoenix after 1986's Stand by Me. Two years later, though, Joaquin's big brother received comparisons with the James Dean of Rebel Without a Cause for playing a high-schooler trapped in an increasingly impossible life, and the comparisons were apt. Phoenix may not scream “You're tearing me apart!”, but he doesn't need to, because his piano prodigy Danny radiates frustration and rebellion, the quiet kinds, through his every tender reading and subtly anguished expression. I've loved this movie like mad since 1988, and even though it immediately became a more depressing viewing experience after Phoenix's 1993 death, I've continued to watch it at least annually ever since. I just wipe my eyes more now. Performance moments to savor: Phoenix's emotionally devastating monologue – both a figurative and literal Oscar clip – in which Danny reveals his identity to the girl he loves; his expression of gratitude and loss during a roadside farewell; and Phoenix giving Danny's mom a reflexive, empathetic hug right after she dyes his hair. These days, who wouldn't want to hug their stylist?! 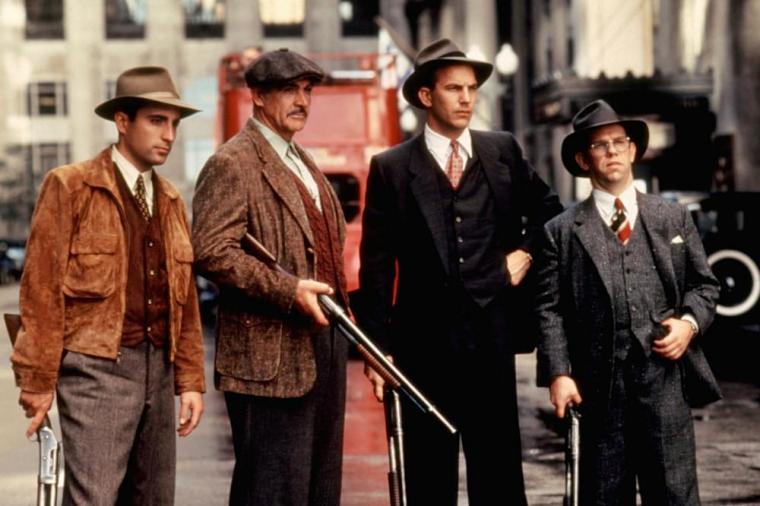 Sean Connery in The Untouchables: The actors listed thus far were all young or relatively young – between 17 and 38 – when they gave these iconic performances. But I'm not sure any of their portrayals were a bigger surprise than the one we got from a then-57-year-old who had been a household name for decades. Who knew, before 1987's The Untouchables, that Sean Connery had it in him to be this hilarious? And this warm? And this expert at speaking in furious blasts of David Mamet-ese? Director Brian De Palma's big-budget rendition of TV's crime series from the '50s, with Kevin Costner as Treasury Department agent Eliot Ness and Robert De Niro as a baseball-bat-wielding Al Capone, remains one of its decade's most satisfying blockbusters. And nothing about it is more satisfying on both specific and cultural levels than Connery's joyously confident turn as beat cop Jimmy Malone, a relatively small-time figure whose presence, by the end of his screen time, grows to something positively mythic; he's the mentor of your dreams and the antagonist of your nightmares. I enjoyed my first of dozens of eventual viewings with my college buddy Mark, after which we drank coffee for hours and mentioned how cool it would be if Connery actually won an Oscar for this thing. Nine months later, he did. See what can happen when you send out hopeful vibes like that? Performance moments to savor: Connery's visible delight when Malone baits and pisses off Andy Garcia; his fierce, eventually gruesome interrogation of an open-mouthed corpse; and “He pulls a knife; you pull a gun. He sends one of yours to the hospital; you send one of his to the morgue. That's the Chicago way.” I just delivered that in my best Sean Connery voice. The imitation is spectacular, no?