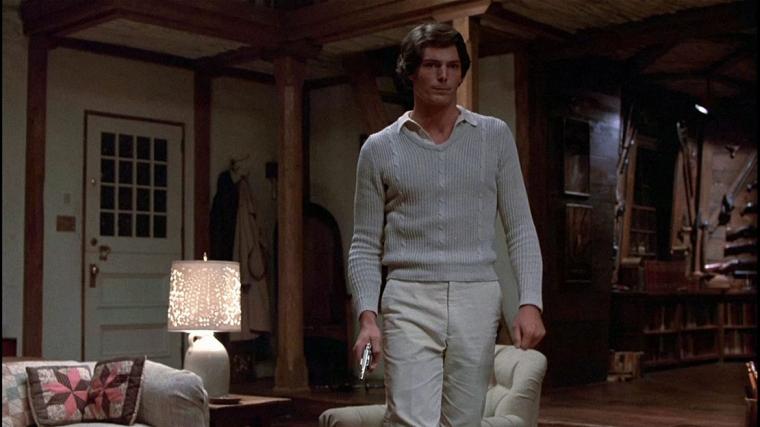 My dad, who lives with my mom in Crystal Lake, Illinois, turned 80 last week. As with many other recent celebrations – all of ours, everywhere – our family's planned-for birthday party never took place, and we're going to have to wait a while before we can officially convene in Dad's favorite Brazilian restaurant. (Which might actually be the rest of the family's favorite Brazilian restaurant, but hey – Pop likes it, too.) In the meantime, this one's for you, Dad – I'm finally reviewing Evil Under the Sun!

A word of explanation. Dad loves Agatha Christie movies. At least he loves a handful of them, which he dutifully and happily watches, year after year, on New Year's Eve. I have no explanation for why he only views them on that particular holiday. (Maybe as a potential good-luck charm against potential murderers in the new year … ?) But this apple didn't fall far from that tree, because from a relatively early age, I, too, felt the pull of a really good mystery, and the early years of my lifelong love for movies cemented it. Here are five totally worthwhile home-viewing options in that whodunit (or who's-gonna-do-it) vein – three Christies, two not – from 1974 to 1982. Most of them are fundamentally comedic, and all of them are things you might wanna watch for yourself on December 31, or preferably earlier. 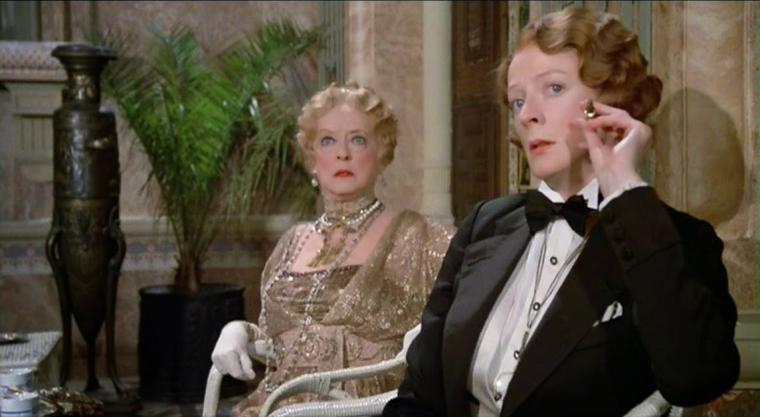 Death on the Nile: Unless you were around to appreciate it, there's no way to properly explain the impact of getting HBO – your own Home Box Office! – around the time the service premiered. Our family subscribed in 1980, and oh God, it was life-changing: R-rated movies with swearing and nudity! Filthy-mouthed standup specials! Live boxing! I wasn't allowed to watch any of that. But I was permitted to watch director John Guillermin's 1978 Agatha Christie yarn … and I'm not sure I should've been. Viewed as a 12-year-old, this thing was terrifying, given the poisonous snake and continual pileup of corpses and Mia Farrow's freaky tour-guide speech at that Egyptian tomb. (It took years to not get the shudders whenever Farrow appeared on-screen, and I hadn't even seen Rosemary's Baby.) Yet it was the sort of terrifying I returned to again and again as a kid, and even though 42 years have passed since the film's debut and it no longer remotely scares me, Guillermin's outing holds up amazingly well and only feels a little bit kitschy. (For true kitsch, see the third title in this lineup.) Part of its success, of course, stems from Christie's plot, which asks us to solve several mysteries beyond the killing of Lois Chiles' moneyed harridan: Who stole the pearls? Who pushed that rock? Who was blackmailing whom? The rest of its success, though, can be attributed to its swank high style (Anthony Powell won a costuming Oscar) and the ridiculously fine cast led by Peter Ustinov – to this day, my favorite interpreter of the role – as the fatuous, fiendishly clever Belgian sleuth Hercule Poirot as he exercises his brain's “little gray cells.” The rest of Death on the Nile's ensemble? Oh, Bette Davis, Angela Lansbury, Maggie Smith … . You know. The usual. 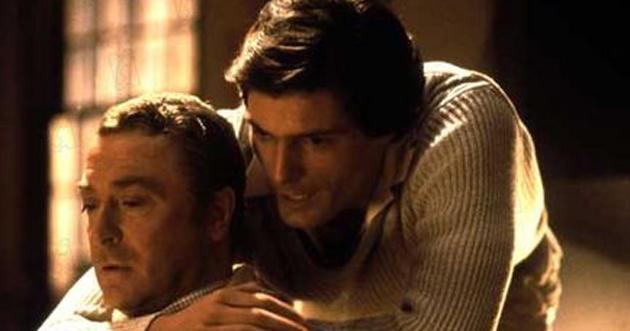 Deathtrap: So it's 1982, and everyone loves Christopher Reeve because of Superman, and a new film gets released – a mystery-comedy with Reeve and Michael Caine and Dyan Cannon apparently scheming against (or with) each other in something called Deathtrap. It looks like a great time, and besides, the only other non-Superman Reeve movie we've seen is the supernatural romance Somewhere in Time that seemed to be on HBO three times a day. (I make fun of this largely silly movie, but it's actually lovely, and boasts a heartbreaking John Barry score.) My mom, movie lover that she is, agreed to chaperone me. And director Sidney Lumet's adaptation of Ira Levin's Broadway smash concerning a murderously determined playwright was indeed a mystery-comedy blast, overflowing with snappy banter, desperate situations, and motivational twists and turns. But then, at the halfway point, Reeve did something that … . Well, if you're familiar with the material, you probably know what he did. It's safe to say, though, that no one at my 1982 screening saw it coming, because our crowd gasped – and even today, the moment elicits a giggly, naughty tingle, because that was about as close to true subversion as Hollywood got in that Reagan-era spring. Though less shocking, the rest of the film played with its reveal in deliriously diabolical ways and enabled additional enjoyment courtesy of Irene Worth and Henry Jones. And because it's by Lumet, one of cinema's most deservedly esteemed stage-to-film translators (12 Angry Men, A View from the Bridge, Long Day's Journey Into Night), you also feel as through you have a front-row seat at a first-rate theatrical performance with Caine, Cannon, and Reeve headlining. I never thought of Reeve the same after this movie. I'm grateful for that. 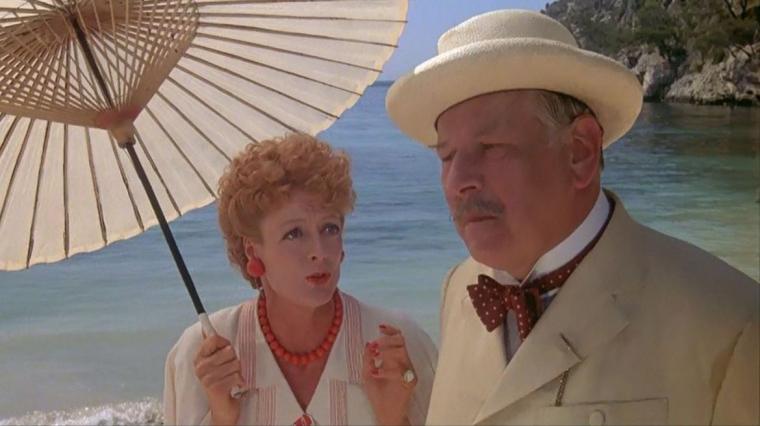 Evil Under the Sun: A little-known fun fact: The Reader isn't the first newspaper for which I've enjoyed a years-long run as a film reviewer. When we were 11, my late buddy Jim and I, both fans of Roger Ebert's and Gene's Siskel's PBS program Sneak Previews, convinced our hometown paper's editor that the weekly pull-out section for kids would be greatly complemented by a print version of that show: his-and-his opinions on current (G and PG) releases. We wrote weekly for two years, and the last movie we reviewed together was Evil Under the Sun, which I awarded four stars back when I still did that. I'd be surprised if I haven't watched the movie at least once a year since, and as ludicrously posh and privileged as it now seems, four stars it would still deserve. What colossal, time-capsule fun this whodunit is! It's Death on the Nile without emotional repercussions or grimness. (Okay, Diana Rigg's hateful actress does get killed here, but she kinda had it coming.) Maybe all you need to know about the style and tone is that the entire score is composed of Cole Porter orchestrations. Imagine a summertime Mediterranean-island murder-mystery accompanied by half the Anything Goes songbook and you'll get the idea. Yet there are blithely resonant flourishes galore: Ustinov's Poirot enjoying a swim with the water stopping under knee height; Rigg and Maggie Smith grinning with hostility during their “You're the Top” duet; James Mason relishing his lack of an alibi; Roddy McDowall's hilariously swishy gay stereotype that even McDowall wouldn't be allowed to attempt now. The mystery is a good one, even if 13-year-old me guessed things right. (Well … half-right.). But director Guy Hamilton's outing remains great for its necessary reminder that surface pleasures, every so often, can be very deep indeed. 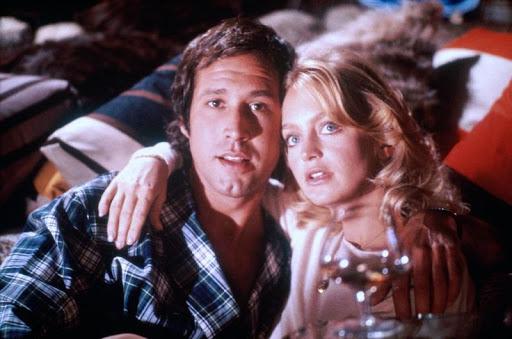 Foul Play: Recently, in a discussion about the sitcom Community, a friend asked if I liked any of Chevy Chase's films. (I mentioned that I wasn't a fan of him on the show.) I got around to Caddyshack and Fletch and the Vacations eventually, but my immediate response was “Foul Play!” Forty years after first seeing director Colin Higgins' 1978 mystery comedy, I apparently still feel inclined to recommend that movie to anyone who might be willing, or able, to see it. (It's only rentable on Netflix, and Amazon's only option is purchase.) I certainly wouldn't dream of defending this San Francisco-based lark in terms of political correctness. There are enough comedic scenarios and visual gags involving dwarfs, albinos, Japanese tourists, and then-current sexual mores to make the film seem like the poster child for everything that was wrong, entertainment-wise, with the 1970s. But none of that diminishes the fizzy charm of Goldie Hawn as this Hitchcock spoof's anything-but-icy blonde, or the behind-the-scenes action finale during a production of The Mikado attended by the Pope (!!!), or Dudley Moore's riotously disgusting bachelor bad, or 70-year-old Burgess Meredith attempting to karate-chop a brick in two and recoiling from the effort with a pained “Oh, shit!” (He gets the job done on his second try.) Meanwhile, for those of you who may only know Chase through Community and Christmas Vacation and maybe a few SNL skits, you owe it to yourself to catch the comedian's film debut and see why so many of us initially adored him as a romantic-comedy lead … and why he was consequently invited to star in (with few exceptions) one nightmarish Hollywood misfire after another throughout the early '80s. Chase was handsome, funny, genial, warm, accident-prone, and a complete delight. Just like Foul Play itself. 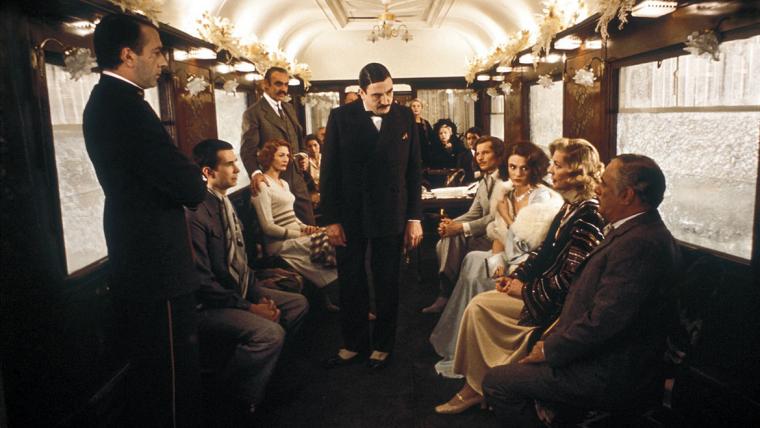 Murder on the Orient Express: No, not Kenneth Branagh's star-studded whodunit from 2017. And not 2001's modernized version with Alfred Molina and Leslie Caron, either. Not the 2015 Japanese update or British TV's 2010 episode of Poirot featuring Jessica Chastain – and not the 2006 video game that finds Poirot's Poirot David Suchet voicing his famed Agatha Christie role. My favorite take on Murder on the Orient Express, and my favorite Christie of all time, is Sidney Lumet's 1974 knockout in which Oscar nominee Albert Finney masterfully dons the Poirot guise. Branagh and company leaned into the terrible sadness of the murderer's possible motive that involves the kidnapping and killing of a three-year-old girl. By contrast, Lumet's take leans on the ugliness and anger behind gangster Richard Widmark's execution … but only after a solid hour of aesthetic gorgeousness provided by the film's design team and the exquisite elegance of its cast. Even though Christie's novel came out in 1934, it somehow feels too early for spoilers; I personally know plenty of people who still don't know who done it. So for those of you not privy to this mystery's endlessly fascinating resolution, I'll merely say that (a) Anthony Perkins is almost as creepy here as he is in Psycho; (b) the other estimable, madly suspicious cast members include film legends Lauren Bacall, Sean Connery, Vanessa Redgrave, and Jacqueline Bisset; (c) Ingrid Bergman won a Supporting Actress Oscar for, among other reasons, her brilliant three-minute scene performed entirely without cuts; and (d) John Gielgud, at one point, sends a millisecond-long look into the camera that, as a 13-year old, froze me to my very soul. If that brief first-person encounter was an accident, it was a genius one. If it was intentional, Gielgud may be the wisest, cruelest film actor of all time.