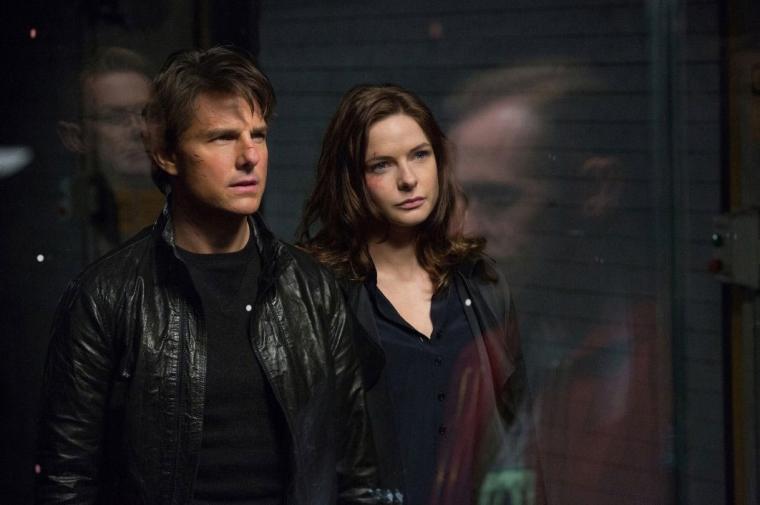 Before a recent screening, I saw one of those previews in which a Hollywood star welcomes you to your local Cinemark chain, and as soon as that star said, "Hi, I'm Tom Cruise," a woman in the front row let out a loud, seemingly involuntary "Yech." The preview, of course, was for Mission: Impossible - Rogue Nation, and perhaps the best solace I can offer that woman is that while I frequently find Crusie yech-y, too, the movie itself is a lot of fun. It's even more fun if you can forget that Cruise is starring in it. But, y'know ... good luck with that.

It'd be easy to be bothered by this fifth M:I installment's over-plotting if the franchise's plots ever really meant anything. All you really need to know is that the CIA has shut down operations for Ethan Hunt's surveil-and-destroy team, and Cruise's Hunt has gone rogue to expose and decimate a nefarious team of spies and assassins called the Syndicate. Add global threat, stunts, and stir. But "mindless" isn't an action-movie pejorative when the individual set pieces are as thrilling as they are in writer/director Christopher McQuarrie's outing. There's a stunning motorcycle chase and humdinger of a mano a mano brawl above a Viennese staging of Puccini's Turandot, and the scene of Hunt swapping out one security card for another underwater, sans scuba gear, was so exhilaratingly intense that I felt my entire audience collectively holding its breath. And while Sean Harris, with his perma-frown and nasal Brando mumble, is an underwhelming über-villain, we're routinely given Jeremy Renner, Ving Rhames, Simon Pegg, Alec Baldwin, and the deliciously fierce newcomer Rebecca Ferguson to grace the proceedings with texture and humor.

So what can be done about Tom Cruise? At this point, probably nothing, and he enacts what's required spectacularly well. Too well. He's expectedly terrific in sequences of high peril, and so enjoyable in his lightly throwaway readings and reactions that I wish to God Cruise would realize that comedy is where his greatest strengths lie. (Last year's Edge of Tomorrow was probably a career high, precisely because he was allowed to simultaneously kick ass and be funny.) But the man no longer appears capable of peforming the simplest tasks - speaking on the phone, looking at his watch, listening - without showing us his dogged commitment; as in that yech-ed trailer showcasing Cruise, at age 53, doing his own stunts, we're being continually ordered to respect and applaud his tireless, back-breaking labors, damn it. Mission: Impossible - Rogue Nation is a delightful piece of work. I wish it didn't find Cruise forever reminding us of how much work was required. Is Lindsey Buckingham's "Holiday Road" the most cheerful opening-credits tune in movie history? The upbeat bounce of the bass line, the roller-coaster rise and fall of "Ohhhh"s, the inexplicable yet oddly perfect barking dog ... . Buckingham's ditty from 1983's National Lampoon's Vacation practically dares you not to grin, and the smartest thing the makers of the new Vacation did was attach the song to its own opening credits alongside a montage of hilariously embarrassing snapshots from real-world family vacations. Writers/directors John Francis Daley (Freaks & Geeks' Sam Weir) and Jonathan M. Goldstein begin on such an upbeat, comically awkward high that you immediately sense Vacation having nowhere to go but down, and you're proved right. But casual gross-out farces don't need to be consistently funny as long as they're sporadically really funny, and this latest Griswold adventure boasts just enough belly laughs to make it mildly enjoyable overall - at least if you attend a reduced-price screening, or use a gift card that was just going to expire anyway.

Its reboot-y premise concerns another family trek from Chicago to California's Walley World, this one initiated by the now-grown Rusty, and the film's most substantial, consistent problem is the casting of Ed Helms, who in no way suggests the sharp, shrewd young man once played by Anthony Michael Hall (and Johnny Galecki ... and Ethan Embry ... ). Maybe there's a joke here, in the suggestion that even the sanest Griswold men turn into imbeciles once they hit 40. But Vacation merely finds Helms reprising his crushingly needy, hissy-fit-prone Andy Bernard from The Office; there's no weight to the actor's escalating hysteria, because Helms never truly convinces you that Rusty is human. (Chevy Chase cameos as Griswold patriarch Clark, and is more naturally, endearingly goofy in his five minutes than Helms is in 100.) Yet despite Helms and a bunch of unfortunate routines reeking of flop sweat, Christina Applegate emerges as the winning screwball comedienne Beverly D'Angelo was never entrusted to be, and there are great mean-spirited and racy gags throughout. While routines involving Rusty's Albanian family truckster - one of its control buttons is a blessedly untouched swastika - keep paying off in spades, there's also an excellent set piece involving twitchy security guards at the southwest's Four Corners region, and the bullying of older sibling James (Skyler Gisondo) by younger bro Kevin (the riotous Steele Stebbins) is endlessly hilarious. And while Ron Livingston, David Clennon, Charlie Day, Colin Hanks, and others are stuck in sad roles, at least Vacation finds room for Chris Hemsworth sporting a riduculously intimidating BVD package, and a terrific turn by Keegan-Michael Key, who now is apparently federally mandated to appear in a new movie every month. No complaints here.