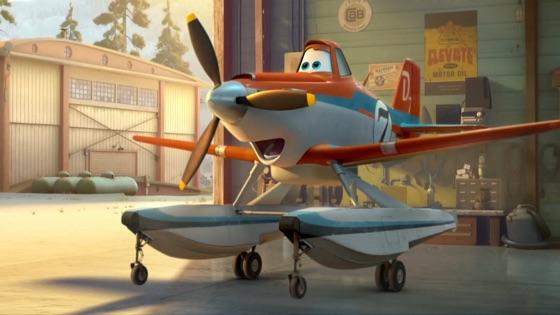 Friday, July 18, 10:30 a.m.-ish: My 3D glasses in place, I prepare to watch the animated sequel Planes: Fire & Rescue with surprisingly vivid memories of its precursor, probably because it was released a mere 11 months ago. I'm really hoping that, this time around, director Roberts Gannaway's tale of anthropomorphic vehicles with bulging eyes and recognizable celebrity voices won't remind me of Pixar's Cars every three minutes, and happily, it doesn't. Instead, I'm frequently reminded of the astronaut epic The Right Stuff, which is a much cooler movie to pilfer from.

With Dane Cook's crop-duster Dusty newly hampered by a broken gearbox, the champion racer now takes up with a national park's team of emergency firefighters, leading to all manner of visually beautiful, if dishearteningly dull, rescue sequences. In truth, for this grown-up, the unfortunate blankness of the characters' expressions - which seem vacant even in the midst of danger - makes much of the entire movie dishearteningly dull. But the numerous Right Stuff references (A Yaeger-like free fall from the heavens! A wall of deceased-flier photos! Ed Harris!) help make the film more enjoyable than the first Planes, as do some ticklish bits of business and vocal performers (Hal Holbrook! Julie Bowen! Stiller & Meara!). Second-best bit: a CHiPs parody featuring the voice of Erik Estrada. Best bit: a broken-down car explaining his misery with "She left me for a hybrid. I didn't even hear it coming." 12:15 p.m.-ish: Even though I eventually pay dearly for my curiosity, I find myself mildly anticipating writer/director Daniel Lusko's Persecuted, because the film's IMDb page revealed that Dean Stockwell was among its cast, and in all honesty, I was sure the man died years ago. Blessedly, he didn't, even though the great character actor doesn't look terribly well here. But I don't know how anyone could look good in this hopelessly, staggeringly feeble folly for the religious ultra-right - a thrill-less political thriller whose plotting is wholly absurd, whose characters make utterly no sense, and whose dialogue can only be considered dialogue because its unfathomable sentences boast nouns and verbs. James Remar, who has played no end of screen psychopaths, portrays some sort of heroic televangelist whose global popularity makes him a threat to the government's proposed "Faith & Fairness" bill, and I find myself suppressing laughs on a regular basis: at the casting of actor and former Republican Senator Fred Dalton Thompson as Remar's cigar-chomping pastor father; at the hysterically hammy facial contortions of co-star Brad Stine; at absolutely everything involving what are clearly the most dim and ineffectual FBI agents ever. Lusko's movie is like what you'd get if you mixed The Fugitive, The Firm, and Michael Clayton in a blender and served it with a communion wafer, and it all ends with one of those patronizing "What would you do?" finales that used to climax 1950s educational shorts on dating etiquette and hygiene. I leave the auditorium feeling the need to either immediately shower or ...

1:55 p.m.-ish: ... catch an R-rated, profanity-laden entertainment with almost no redeeming moral value whatsoever. Success! Unfortunately, the film I'm at is director Jake Kasdan's Sex Tape, which turns out to be pretty lame. Cameron Diaz and Jason Segel play married parents whose recorded attempt to spice up their love life results in three hours of naked calisthenics hovering in the cloud, and consequently viewable to the couple's iPad-toting acquaintances. As even the characters eventually conclude, this really isn't that big a deal, and this slapstick's attempts to make it one are generally forced, protracted, repetitive, and unfunny. Still, it's easy enough to sit through. The leads are friendly, if not as inspired as they were together in Kasdan's 2011 comedy Bad Teacher, and second bananas Rob Corddry, Ellie Kemper, Nancy Lenehan, and grade-schooler Giselle Eisenberg help enormously. (Jack Black, unfortunately, not so much.) Finest of all is Rob Lowe, whose coke-snorting nebbish with the ear-to-ear grin proves as riotous, and as essential to the proceedings, as the actor's lacquered, barely ambulatory plastic surgeon in 2013's Behind the Candelabra. He's been wonderful for years, but when exactly did Lowe begin his side career as a thief, prone to stealing everything he appears in?

3:55 p.m.-ish: I'm at The Purge: Anarchy, a sequel to the horror hit about future America's annual night of legalized murder and mayhem, and my first thought when I see his (inevitably) victimized character on-screen is: poor Zach Gilford. The Friday Night Lights star begins the movie year with his Devil's Due wife impregnated by Satan, and now this? The rare case of a fright flick that's brutally effective without actually being fun, writer/director James DeMonaco's outing takes some unexpected narrative detours, and sets up intriguing possibilities for future Purge installments. But this violent cat-and-mouse tale is too grim to be a good time and photographed too darkly for us to see much of the bad time, and you can count the sincerely scary moments on the fingers of one hand. Castmates Frank Grillo, Carmen Ejogo, and Justina Machado, though, are excellent, and John Beasley has a haunting presence as an old man who grumbles, "I'm going to try to sleep through this godforsaken holiday." Just like me on New Year's Eve.

6:15 p.m.-ish: Home with some dinner and a new book. A book of movie essays. I really have to start expanding my interests.