God, I hate Disney. Not all the time, of course, and in any case, "hate" is probably a strong word. But why does the studio have to keep releasing live-action movies that are inseparable from cartoons, with all of the potentially legitimate conflict inevitably dulled down and scrubbed squeaky-clean? And why does its succession of inspirational sports dramas never feature any actual coaching beyond bland and clichéd motivational speeches? And why do these damned things keep making me weep like a baby? 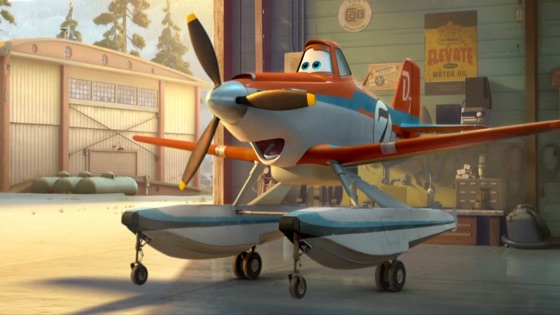 Friday, July 18, 10:30 a.m.-ish: My 3D glasses in place, I prepare to watch the animated sequel Planes: Fire & Rescue with surprisingly vivid memories of its precursor, probably because it was released a mere 11 months ago. I'm really hoping that, this time around, director Roberts Gannaway's tale of anthropomorphic vehicles with bulging eyes and recognizable celebrity voices won't remind me of Pixar's Cars every three minutes, and happily, it doesn't. Instead, I'm frequently reminded of the astronaut epic The Right Stuff, which is a much cooler movie to pilfer from.

New Year's Resolution: "Fruitvale Station" and "The Way Way Back" Marvel Studios' recent spate of superhero movies has trained us - or tried to train us, at any rate - to stick around for at least the first few minutes of the end credits, offering the promise of a bonus scene designed to build excitement for comic-book adventures yet to come. (Not to give the details away, but Marvel's new The Wolverine features a happy doozy of one promoting 2014's X-Men: Days of Future Past.) Yet while they couldn't possibly have been expecting this same sort of credit cookie at the independent drama Fruitvale Station, the audience members with whom I saw the film stayed similarly glued to their seats, almost as though none of them was quite ready for the experience to be over. Given how haunting and emotionally overpowering writer/director Ryan Coogler's debut feature is, it would be impossible to blame them.

Yes, I just used "witty," "savvy," and "almost perfectly pitched" to describe a Michael Bay movie. Trust me, you're not as shocked as I am.

The Agony of the Ecstasy: "Snitch" and "Escape from Planet Earth" As a film star, Dwayne Johnson possesses a lot of gifts - or, at least, sufficiently impressive gifts for what his résumé has required. Though God knows he's physically intimidating, Johnson is also our most thoroughly genial of ass-kickers, with even his most violent of big-screen endeavors leavened by a welcome lightness of touch and hint of amused self-mockery. And as he has proved in all those bland family entertainments over the years, Johnson still manages to appear game and committed in movies that don't deserve his considerable charisma, often salvaging entire scenes through unexpectedly silly gestures or readings that show just how inventive a comedian he can be. (I was happy for 10 whole minutes following his brief channeling of co-star Michael Caine in Journey 2: The Mysterious Island. They were about the only 10 minutes during the movie in which I was happy.) Scottish Rites, and Wrongs: "Brave," "Seeking a Friend for the End of the World," and "Abraham Lincoln: Vampire Hunter" Like many of you, I'd imagine, I applaud Pixar for finally giving audiences a strong female protagonist in Brave, and would've looked forward to the movie itself more had the trailers not been so resoundingly blah. But what I'd forgotten was that several of the animation studio's best outings - Finding Nemo, WALL•E, Toy Story 3 - were also promoted with weak previews, and so it's a pleasure to say that this Scotland-based adventure is one of Pixar's most involving and interesting achievements in years, partly because those generically jokey trailers give you almost no idea of what's actually in store. Prior my Saturday screening of Cedar Rapids, I'd seen 18 2011 releases, and my favorite of the mostly-slash-wildly underwhelming bunch - by a considerable margin - was Justin Bieber: Never Say Never. It's tempting, then, to want to overpraise director Miguel Arteta's raunchy yet genial comedy simply for being, you know, good.

Trouble Bath: "Hot Tub Time Machine" and "How to Train Your Dragon" Early in director Steve Pink's new comedy, miserable fortysomethings Adam (John Cusack), Nick (Craig Robinson), and Lou (Rob Corddry) decide to cheer themselves up with a weekend retreat to the beloved ski lodge of their youth, taking Adam's similarly downbeat nephew Jacob (Clark Duke) along for the trek. In the 24 years since the friends' last visit, the lodge has turned into a weathered dump. But their old room still has a jacuzzi, and after a debaucherous night of liquor, cocaine, and bubbling hot water, the four men awaken, and gradually discover that they've been magically transported to 1986. Gazing at the agent of this disruption with the space/time continuum, Nick says, "It's like some kind of ... hot tub time machine." And then, with the slowest of head movements and the deadest of deadpans, Nick turns and stares down the camera, as if to say, "Are you freaking kidding with this?"