So No One Told You Life Was Gonna Be This Way: Favorite Comedies for When You're Missing Your Friends 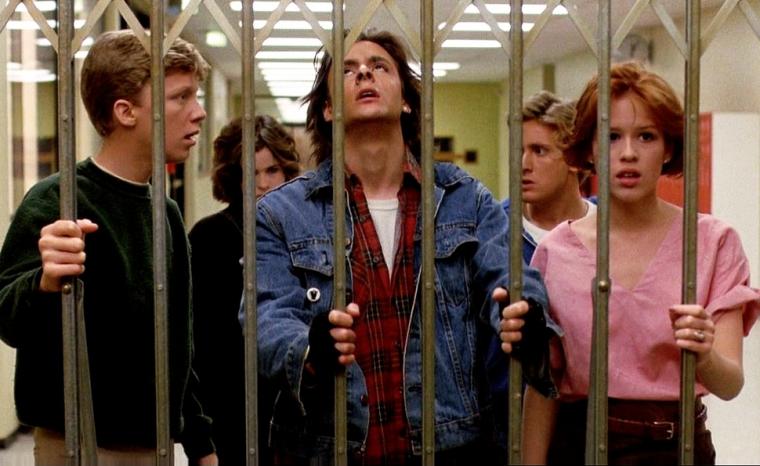 Not that any of you need to be told this, but self-quarantining can play really weird tricks with your mind and emotions, even in regard to entertainment. The other night, in preparation for this article, I re-watched Barry Levinson's Diner – an all-time favorite since I was 15, and a comedy that never ceases to amuse me. But when, during one of the film's most memorable squabbles, Daniel Stern grabbed half of Steve Guttenberg's roast-beef sandwich and started to eat it, I flinched. Fer chrissakes, I instinctively thought, what are you thinking?! Isn't is bad enough that you guys are sitting shoulder-to-shoulder in public?!?”

It was still a treat, however, to hang with Guttenberg and Stern and the rest of the Diner gang for a couple hours – maybe especially now, given that I would personally relish the experience of a pal being a jackass by stealing half the food off my plate. So if you, too, find yourself missing your dearest and, for now at least, no longer nearest, consider spending some time with these five hanging-with-friends comedy classics. Advance apologies for the, shall we say, bro-centric nature of most of these titles from 1979 to 1993. That wasn't an especially great era for studios green-lighting similar movies centered on female buddies. And Beaches ain't all that funny. 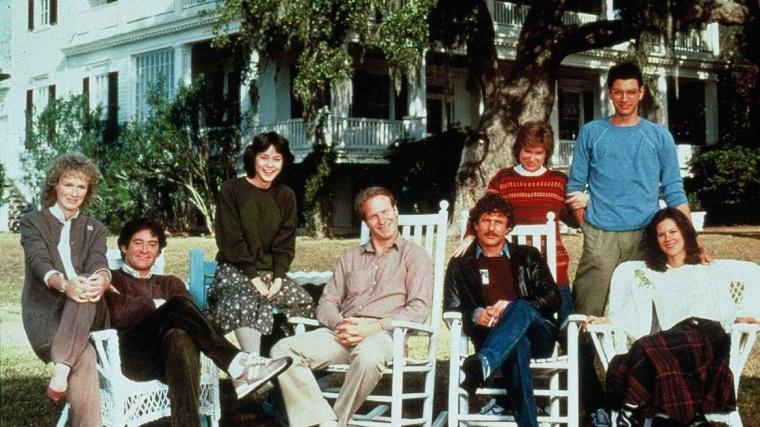 The Big Chill: Okay, yes – this ensemble dramedy about collegiate pals from the late-1960s reuniting in 1983 opens on a grim note, with our protagonists learning of an old friend's suicide. (Fun fact, though: The corpse in question, whose face we never see, is played by Kevin Costner!) But what the film really opens on, about a minute before Glenn Close's and Kevin Kline's spouses hear the news, is their toddler in the bathtub as the child sings “Joy to the World,” a tune he no doubt learned from his former-hippie parents. In a nutshell, that's kind of the overall appeal of Kasdan's and co-screenwriter Barbara Benedeck's mildly funereal house party: We may be gathered under tragic circumstances, but that doesn't mean we can't have some fun. And this film is crazy-fun – a wondrously entertaining tale of one-time radicals relishing a post-graduation get-together none of them expected or wanted. There's a legitimate young-'un in the mix, too, with Meg Tilly portraying the deceased's dancer girlfriend who's too removed, or maybe just too stoned, to bond with the 30-somethings surrounding her. But those pre-middle-agers compose an almost ridiculous assemblage of talent: Close, Kline, Tom Berenger, Jeff Goldblum, William Hurt, Mary Kay Place, and Jobeth Williams, all of them exuding effortless charisma and superior comic chops. As with any group of whip-smart friends, they're also divine in any number of specific combinations: Tilly giggling as Hurt conducts a video-recorded self-interview; Close, high on coke, refusing to let Kline sleep; Place rebuffing Golblum's unsubtle advances; the rest of the group ganging up on poor Berenger for the cheesy opening credits to his TV action series. There's also plenty of conflict. But it all ends, over breakfast laughs, with Three Dog Night's actual “Joy to the World.” The Big Chill is joy in the world. 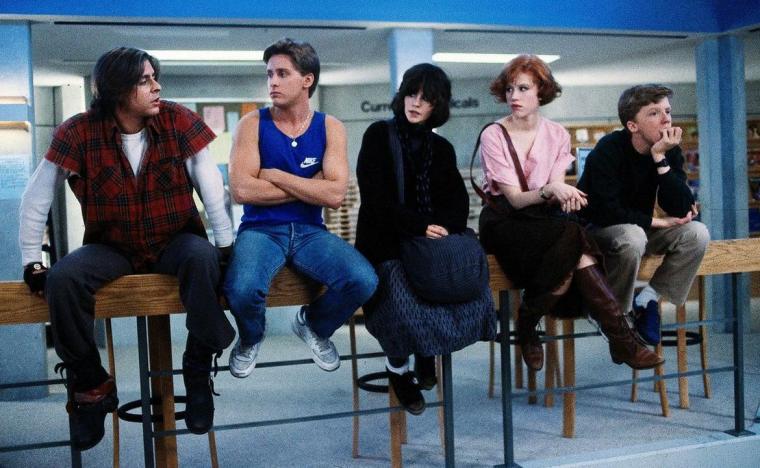 The Breakfast Club: “Wait a minute,” I hear you arguing about the inclusion of John Hughes' 1985 high-school-comedy touchstone. “This shouldn't count as a hanging-with-friends flick – those guys don't even like each other until the end!” Fair enough. But Emilio Estevez's “athlete” and Molly Ringwald's “princess” at least tolerate each other. Plus, no one seems to really mind Anthony Michael Hall's “brain” and Ally Sheedy's “basket case.” Only Judd Nelson's “criminal” seems like a jerk. But also: Who cares? Can you think of another film about peers (friendly or not) that might be more fitting, affecting, and aspirational given our requested state of quarantining? Consider: You're forced to be where you don't necessarily want to be all day long. The people you're with frequently irritate you. You have something that needs doing – say, writing a Saturday-detention essay at the command of the assistant principal. You just can't summon the energy or interest. So what do you do instead? You mope. You whine. You snap at the people around you. You try to amuse yourself. You occasionally succeed. You take a nap. You wake for lunch. You begin noticing the weirdness of other people's food choices and eating habits. You get restless. You walk around. (Maybe you play some basketball before an authority figure stops you.) You accept that you might as well make the best of your situation. You drop your defenses a little. You reach out to people you might otherwise not have. (You maybe get high.) You listen. You learn. You empathize. You laugh. You dance. You make, or re-make, friends. You finish your assignment. The seclusion ends. You're allowed to go. You do. You leave grateful for the kindnesses in this otherwise horrible day. In the meantime, at least once, you watch The Breakfast Club. 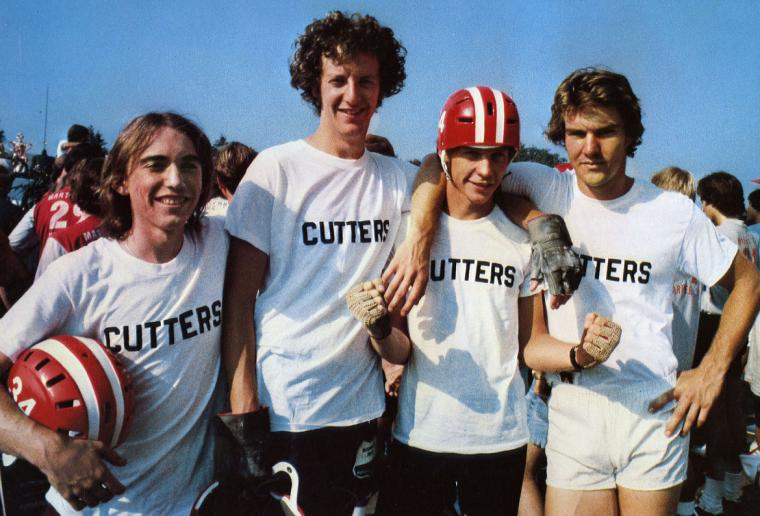 Breaking Away: Luckily, my sister Chris is a really easy laugher, and I can always get her going with a question from this 1979 movie we love: “Refund?!?” Unless you've seen director Peter Yates' and screenwriter Steve Tesich's Oscar winner about four largely directionless Indiana youths hanging out post-high school, that query probably won't generate a smile, let alone a reflexive giggle. But while “Refund?!?” is the word that most quickly comes to mind when thinking of Breaking Away, it's the last thing I'd want in regard to its purchase; I've watched this hilarious, moving, coming-of-age charmer so many times I may as well be named its legal guardian. Beyond being an endlessly enjoyable character comedy, it's also a rousing triumph-of-the-underdog sports flick, with Dennis Christopher's obsessive cyclist Dave convincing his pals – Dennis Quaid's Mike, Daniel Stern's Cyril, and Jackie Earle Haley's Moocher – to team with him in a prestigious biking event. (Yates shoots this climactic race's final laps without cuts, and it's a breathlessly exciting lump-in-the-throat finale.) Yet while the picture gets you cheering and sniffling, it most often gets you laughing, and laughing hard. Nearly every line Stern utters is a thing of neurotic beauty, and dozens of viewings have done nothing to diminish the many other pleasures ranging from Dave's aching desire to become Italian (“Oh, Dave, please don't turn Catholic on us ...”) to Quaid driving at top speed backward to Moocher literally punching the clock on his first, and last, day of work. These are pals you could hang with forever … and you could probably hang with Dave's parents forever, too, given the exquisite comic byplay of Oscar nominee Barbara Barrie and a never-better Paul Dooley. “I want American food, dammit,” Dooley barks. “I want French fries.” Chris and I love that one, too. 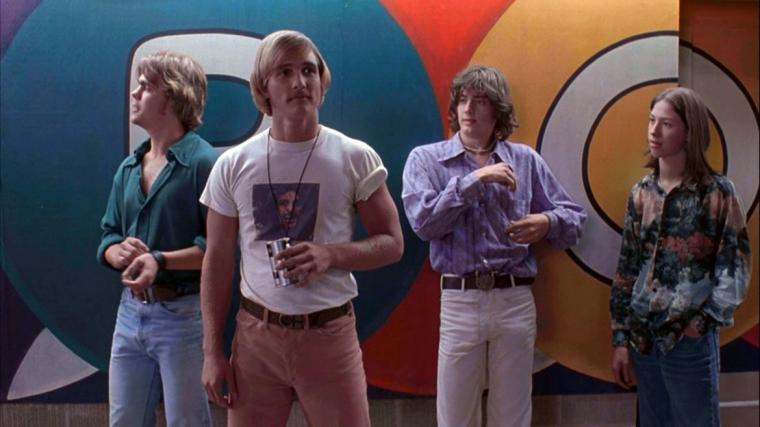 Dazed & Confused: At the end of Richard Linklater's high-school comedy set in 1976 – the movie that made some of us Linklater devotees from very early on – Sasha Jenson's unapologetic stoner, on the first day of summer vacation, delivers this accidentally profound speech: “All I'm saying is that I want to look back and say that I did the best I could while I was stuck in this place. Had as much fun as I could while I was stuck in this place. Played as hard as I could while I was stuck in this place. Dogged as many girls as I could while I was stuck in this place.” Sure, that last sentiment is crass, but ya know: 1976. (Also, ya know: high school. Also, ya know: guys.) And if you, too, are stuck in a place you don't want to be – just like almost every character in this seminal 1993 release – you could do loads worse than spend an hour-and-a-half with the jocks, cheerleaders, freaks, nerds, bullies, hangers-on, and unexplainable whack-jobs populating Linklater's thrillingly verbal ode to the joys of doing absolutely nothing. Now, of course, the movie is revered for providing early glimpses at so many recognizable talents: Ben Affleck getting the public comeuppance his paddle-happy asshole so richly deserves; Parker Posey shrieking at her freshman charges; Milla Jovovich looking dazed and confused while playing acoustic guitar; Matthew McConaughey delivering his iconic appraisal “That's what I love about these high-school girls, man – I get older, they stay the same age.” Even in 1993, though, it was clear that Linklater's bicentennial salute was one for the ages. And 27 years later, to quote the first six words McConaughey ever spoke on-screen, Dazed & Confused is still very much “all right all right all ri-i-i-ight!” 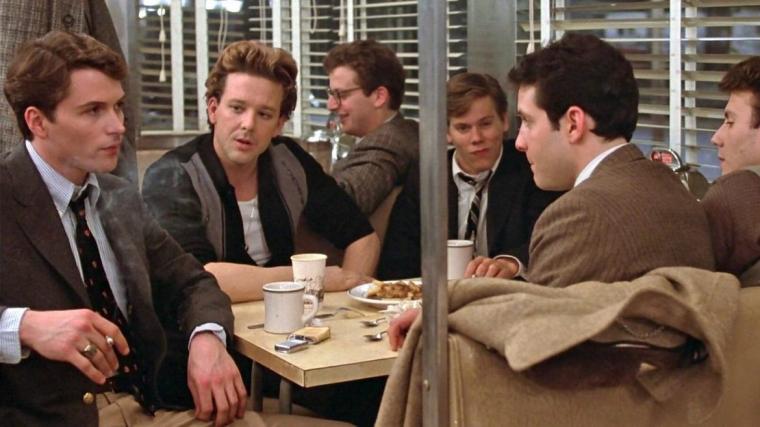 Diner: Although the sitcom is currently gone from Netflix's streaming service, it's easy to imagine wanting to spend at least part of one's self-quarantining days binge-watching Friends. And in one second-season episode, Rachel drunkenly unleashed her Ross problems on a bored blind date who was trying, and failing, to look invested. “You're not having fun, are you?” asks Rachel. “No, no – I am,” he answers. “But only because, for the last hour-and-a-half, I've been playing the movie Diner in my head.” As with any pop-culture punchline, that reference is only funny if you get the joke. But if you don't get why writer/director Barry Levinson's nostalgia comedy was employed for studio-audience laughter in 1995, why on earth are you waiting to see it? Levinson's Oscar-nominated 1982 release is more entertaining than a blotto Jennifer Aniston even in memory! And in practice, it's even better: a semi-autobiographical love letter to 1959 Baltimore suggesting that, as much as we may love our own friends, no one perhaps had funnier ones than Levinson. Steve Guttenberg demanding that Paul Reiser ask for a ride home – or half a sandwich – rather than passively-aggressively hint. Daniel Stern (him again!) acting as their sardonic referee. Guttenberg's mom threatening her adult son with a butcher knife, and not altogether playfully. Kevin Bacon initiating a mean prank involving a side-turned car and a ketchup bottle. Mickey Rourke executing a truly demeaning movie-theater stunt … and getting away with it. There are quietly wrenching moments, as well, mostly involving the debuting, spectacular Ellen Barkin. But guys-being-guys comedies may never have hit a higher pinnacle than Diner, and after all the laughs, the film wraps with a thunderously sweet image indicating just how much Levinson misses the pals of his youth. When the movie ends, we miss them, too.