Must Go Faster: Home-Viewing Options If You're Missing Summer-Blockbuster Season 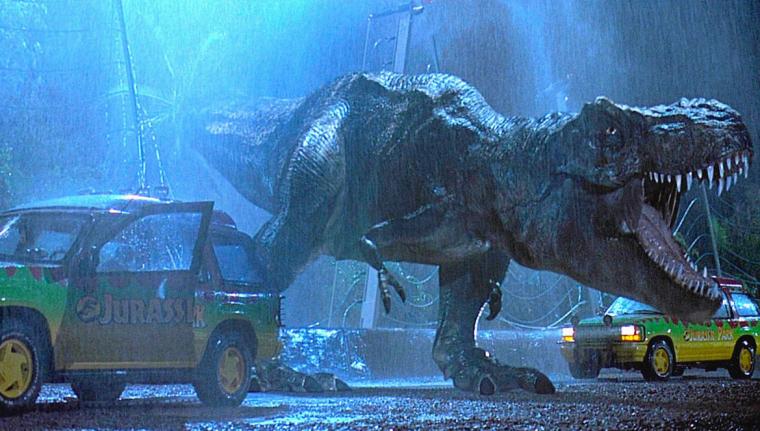 Ordinarily, with the arrival of June, we'd already be hip-deep in summer-blockbuster season, arguing over the merits of this comic-book movie versus that comic-book movie, and wondering what, beyond money, was Disney's interest in producing yet another remake of a beloved animated hit that should've been left alone. (Eternal answer: Nothing.) This year, it goes without saying, isn't in any way ordinary.

So while we continue to hope that multiplexes will be open in time for Christopher Nolan's planned-for July 17 debut of Tenet, or at the very least the August 12 landing of Wonder Woman 1984, here are unforgettable summer blockbusters from 1975 to 1994 that you're probably familiar with, but that are certainly worth viewing again if you're feeling deprived of 2020 summer-blockbuster fun. There was no end of possible contenders for this lineup: Star Wars films, Indiana Jones films, E.T., Ghostbusters, Back to the Future, Who Framed Roger Rabbit, Terminator II: Judgment Day … . But I settled on the following five – all of them ideal for different moods, all of them Oscar winners (from 19 nominations overall), and all of them worth revisiting even if it's snowing. Which, in our area, could be anytime but summer. 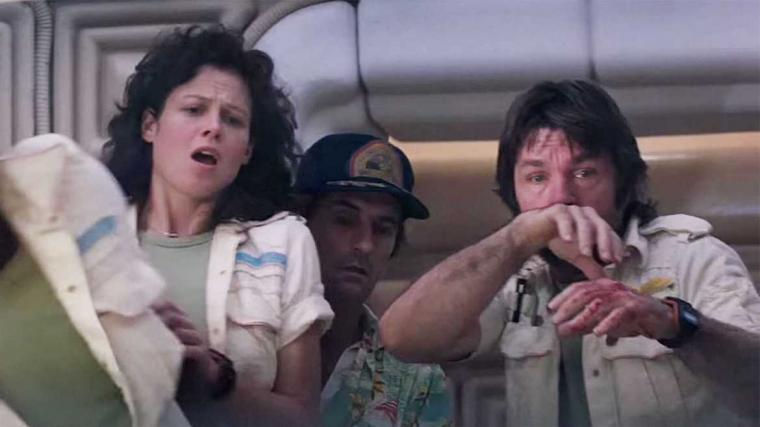 Hard as it is to believe, “summer movies” weren't really a thing until 1975, when audiences went mad for an unassuming little thriller about a great white shark. (See below … not that you haven't seen it already … .) They weren't a huge thing until Star Wars obliterated the box office a couple years later. So when director Ridley Scott's spare, claustrophobic sci-fi/horror classic debuted in May of 1979, summer blockbusters, as identifiable products, were still in their infancy, and could encompass even a bleak, terrifying, R-rated outing with a cast of seven – eight if you include the guy in the Xenomorph suit. (That would be Bolaji Badejo, who deserves props along with the spectacularly committed ensemble of Tom Skerritt, Veronica Cartwright, Harry Dean Stanton, John Hurt, Ian Holm, Yaphet Kotto, and, of course, the invaluable Sigourney Weaver.) A powerful nerve-shredder like this could certainly be released in the same season now, though it would be likelier to make mid-level Hereditary money than the kinds of dollars that would inspire loads of sequels, spin-offs, and comic books. Yet Scott's outer-space shocker has earned its legendary status not only for its artistic excellence, but for serving as a necessary reminder that “summer movies,” once upon a time, were an awfully big tent. Big enough, at least, to encompass a disarmingly naturalistic freak-out in which half the film unfolds without dialogue, traditional Tinseltown elements such as romance and humor are conspicuously absent, and all but one of the protagonists is killed off a full half-hour before the end credits. And that's not even mentioning perhaps the single most unpleasant dinner scene in film history. Come to think of it, it's not that Hollywood doesn't make summer movies like Alien anymore; it's that Hollywood doesn't make movies like Alien anymore. 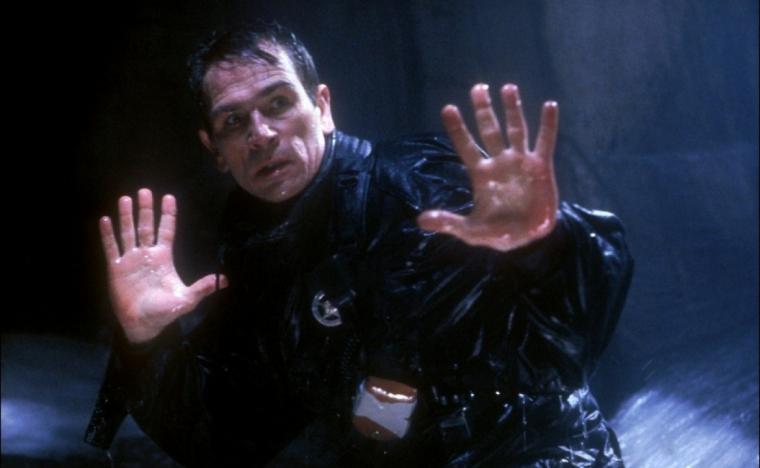 Probably no one needs to be told that summer movies, as a de facto genre, have been arriving earlier and earlier every year, and had things gone according to plan, 2020's summer season may well have started on April 2 with the opening of the 25th James Bond adventure No Time to Die. (Fingers crossed, it's scheduled to land on November 12 instead.) But one thing that hasn't much changed over the decades is blockbuster season effectively ending on July 31, because with very rare exceptions such as Guardians of the Galaxy, August has long been reserved for Hollywood's least likely to succeed – largely throwaway pictures that are generally lucky to make a few weeks' worth of adequate-at-best dough in advance of Labor Day. Certainly, and despite having Harrison Ford as its star, no one in August of 1993 expected much from director Andrew Davis' The Fugitive, a TV-series reboot with little in the way of visual effects, relatively non-aggressive advance publicity, and a one-note (and one-armed) premise. Yet what a wonderful surprise it turned out to be! Not only was Davis' tale of an escaped prisoner searching for his wife's murderer a riveting, fiendishly clever action-thriller, but in the affecting cat-and-mouse game played by Ford and Tommy Lee Jones, the film was easily the most human-scaled blockbuster audiences had been treated to in ages. We expected Ford's wrongly accused Dr. Richard Kimble to be empathetic, and he was. The astonishment was that you felt just as much, if not more, for the dogged U.S. Marshal Samuel Gerard, a gruffly hilarious, unexpectedly resonant “Tommy Lee Jones type” before such a thing existed. After the two leads finally meet and Kimble insists “I didn't kill my wife!”, Jones delivers Gerard's signature line: “I don't care!” We sure did. 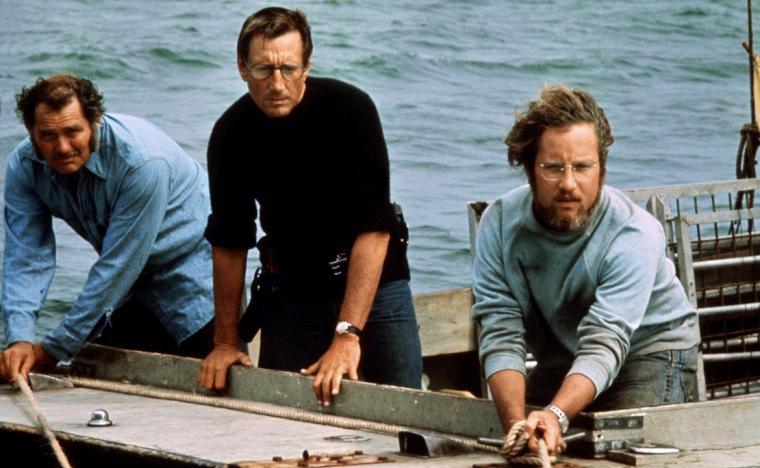 Don't get me wrong. There are, of course, wrenching moments galore in Steven Spielberg's iconic 1975 summer blockbuster: the early demise of skinny-dipping Chrissie; the bloody killing of the Kintner boy; the submerged face that scares the bejeezus out of Richard Dreyfuss' ichthyologist. Yet despite its occasional terrors and the ominous, repetitive thump of John Williams' dun-dun-dun-dun music cues, what's fascinating about the movie is its almost heretical tone of lighthearted irreverence; not for nothing did critic Pauline Kael write, “Though Jaws has more zest than an early Woody Allen picture, and a lot more electricity, it's funny in a Woody Allen way.” Sure, you jump when Roy Scheider's police chief is shoveling chum into the water and the shark, out of freaking nowhere, just appears. (Where were those dun-dun warnings when we really needed them?!) What makes that jolt really work, though, is that it comes right after a joke – our mouths, which are already open with laughter, remain open for consequent shrieks. And with the possible exception of the title below, Spielberg never more-deftly interwove the hilarious with the horrifying the way he did here, and with so little fuss, to boot. The script by Carl Gottlieb and Peter Benchley (based on his novel) is probably the least adorned that its director has ever worked with – a straightforward tale of men versus fish. But it's teeming with verbal and visual gags that are purely character-based: Scheider pouring a glass of wine that's practically the entire bottle; Dreyfuss making fun of Robert Shaw's macho posturing behind the guy's back; Scheider considering showing off his appendectomy scar and thinking better of it. Funniest of all is Shaw's violent comeuppance as he's bitten in half and gently slides into the water. Grisly, yes, but in context, hysterically appropriate. 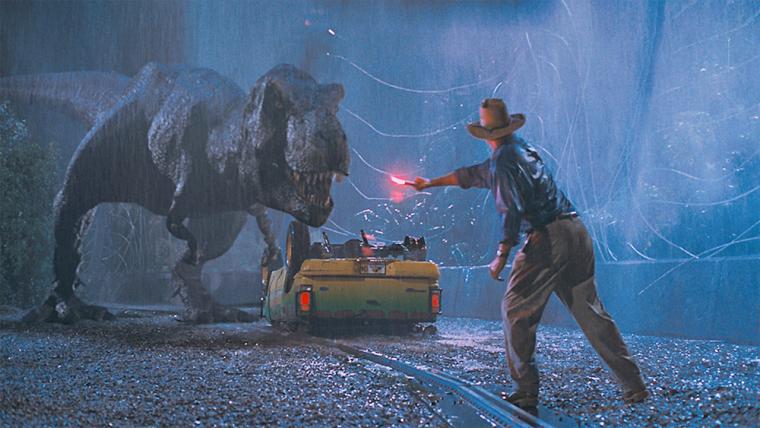 In the summer of 1993, everyone I knew – and probably most everyone, period – was looking forward to this one, given that it had been 18 years since Jaws and it was starting to look as though Steven Spielberg had gone unbearably maudlin on us. (His dino-epic was preceded by 1991's aggressively winsome Peter Pan fantasy Hook and 1989's schmaltzy romantic drama Always, and even 1989's Indiana Jones & the Last Crusade gave us an Indy burdened by serious daddy issues.) What a relief, then, to be in a packed Milan auditorium for one of the most satisfying effects-heavy achievements of the 1990s – a movie whose visuals and sound design still hold up remarkably well, and a film that pretty much wipes the floor with the relative posers of Chris Pratt's Jurassic World offerings. Because it's Spielberg, and because John Williams is again his composer, there's no end of corn: Sam Neill embracing the faux family he never thought he wanted; Laura Dern weeping into her ice cream. But Jurassic Park is practically the dictionary definition of “summertime popcorn entertainment,” and in this case, I don't mean that as a pejorative. Even after innumerable viewings, Spielberg's original is worth revisiting for the subtle grace notes that set off your involuntary-giggle reflex, with everything from the steady ripple in the water glass to the velociraptors planning a three-course meal of Wayne Knight hitting you in the funny/creepy sweet spot every time. (Jeff Goldblum, meanwhile, gives the ultimate deadpan reading with his legendary “Must go faster.”) In the end, though, the movie is in-your-face as all-get-out, and blissfully so. Who needs subtlety when you've got a mealymouthed lawyer getting chomped in half on a toilet and an angry T. rex serving as the ultimate deus ex machina? 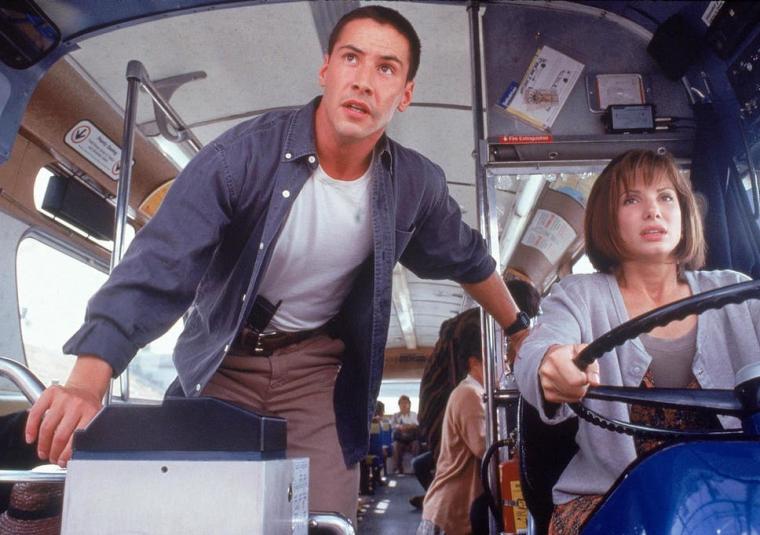 If you want a blockbuster that's all of the above – Speed. Academy Award wins: Sound, Sound Effects Editing; Academy Award nomination: Film Editing.

In a world in which Die Hard exists, I won't court outrage by suggesting that 1994's Speed is the greatest summer blockbuster ever made. Then again, as we all know, Die Hard is actually a Christmas movie, so … Speed is the greatest summer blockbuster ever made. You want your hot-weather entertainment serious and scary à la Alien? Director Jan de Bont's bomb-aboard-a-bus action-thriller gives you upsetting innocent-bystander slayings, a terrifyingly homicidal Dennis Hopper, and a heartbreakingly martyred Jeff Daniels. You want it exciting and honest in the manner of The Fugitive? There are heaps of potentially calamitous near-misses and occasions of beautiful, touching rapport between Keanu Reeves and Sandra Bullock. You want it breezy and funny in Jaws-like ways? You get all those eccentric bus-mates and Bullock's apologetic panic, especially when she nearly plows into a group of children with the rear-view admonition “Why aren't you in school? Why aren't you in school?!?” You want it Jurassic Park-level loud and blockbuster-y? There may not be dinosaurs, but there explosions and screeching tires aplenty, as well as a hysterically improbable soar over an unfinished bridge and a blood-pressure-spiking finale – a climax after the climax – aboard a driver-less subway train. All this plus a nightmarish-turned-riotous crash into a baby carriage, “Shoot the hostage,” a gut-clenching access-panel escape, a decapitation to make you cheer, and what might be the single most emotional moment in this genre's history, with Reeves asking Bullock if she's okay after a harrowing ordeal and the woman stifling her sobs as she tearfully admits, “No.” Summer blockbusters just don't get any better than Speed, and I still grin ear-to-ear right after Hopper's psychopath insists that he's smarter than Reeves' cop. “Yeah,” says Reeves in the finest line reading of his career, “well I'm taller.”