One Good Guy and Lots of Really Bad Ones: “News of the World” and “Promising Young Woman” 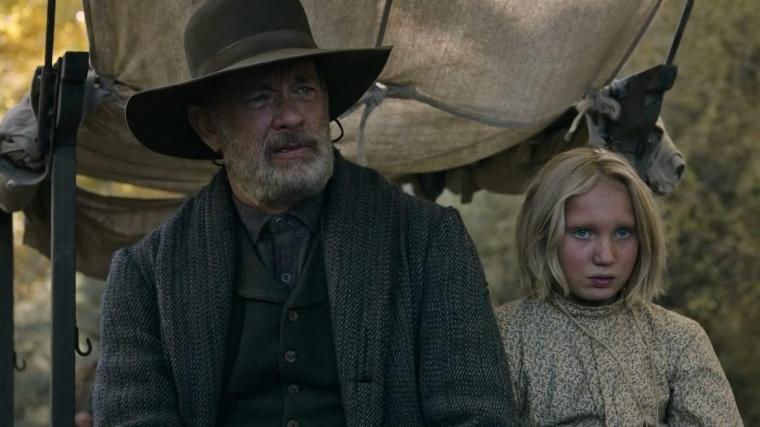 Tom Hanks and Helena Zengel in News of the World

NEWS OF THE WORLD

How is it that Tom Hanks portrayed Mister Rogers only last year and has already landed in the role of someone just as upstanding, decent, and effectively communicative with children?

Set in Texas in 1870, director Paul Greengrass' Western News of the World casts Hanks as Captain Jefferson Kyle Kidd, a former Confederate soldier who now treks from burg to dusty burg reading newspaper reports to those with an hour and a dime to spare. Kidd's travels eventually lead to his discovery of a young German orphan (Helena Zengel's Johanna Leonberger) who lost her parents after being abducted by Kiowa Indians, and then lost her Kiowa “family” after they were massacred by Texans. This film with the simplest of narratives consequently concerns Kidd's efforts to bring Johanna (who doesn't speak English) to relatives 200 miles south, and it's composed almost entirely of vignettes: Kidd and Johanna warding off assailants; Kidd and Johanna enduring a dust storm; Kidd and Johanna bonding and finding a common language. It's a tactful, tasteful film, leisurely yet satisfyingly paced, and a solid, touching entertainment overall. It's also, in all likelihood, as close as Paul Greengrass will ever get to making a Ron Howard movie, and I'm kind of hoping he doesn't attempt another.

Niceness, it should go without saying, isn't an inherently detrimental quality, and certainly hasn't been for Hanks, who has been America's straight male sweetheart for nearly four decades running. Hanks is also, of course, a frequently marvelous actor, and you can feel the pleasure he's getting, and delivering, in scenes here with Bill Camp, Elizabeth Marvel, Roy McKinnon, and others whose talents rival the star's. Yet for all of its period grime, News of the World feels too soft – too nice – for the tale it's telling. With Hanks in the role, there's never any question about Kidd's gallantry and tenacity and determination to bring Johanna to safety, and the other character types are similarly easy to decode: there are kindly figures, and loathsome ones, and nothing in between. But even the situations themselves appear to have been watered down for mass-audience consumption and appeal: the violence (and implied violence) is never truly ugly; the desperation never feels truly life-threatening. It's been 28 years since Unforgiven, and 32 since Lonesome Dove (on broadcast TV!), and both works gave us more suitably grim, dangerous views of Old West living than Greengrass' offering ever provides. Even the film's most theoretically exciting set pieces – such as the one that finds Kidd and Johanna squaring off against a trio of would-be sex traffickers – are lacking the intensity Greengrass brought to his Jason Bourne films and United 93 and Captain Phillips, and while the lovely Zengel is naturalistic and determinedly anti-cute, too little seems to be at stake even when events are at their direst. The performers are credible and the movie is watchable, but News of the World isn't the emotional gut punch it keeps promising to be. It's just nice. Even though it really shouldn't be. 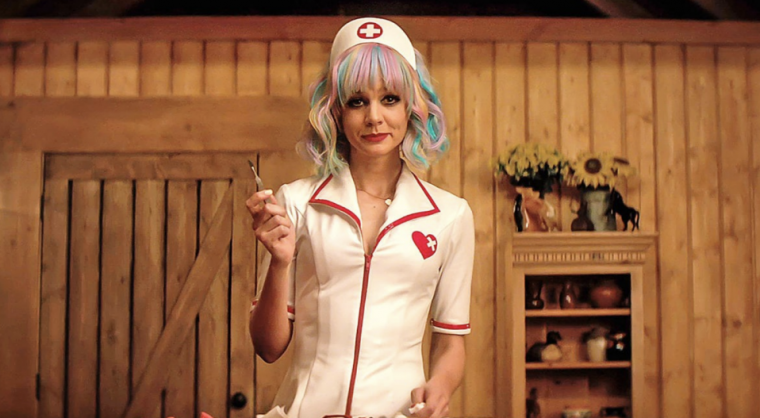 If you're looking for an antidote to “nice” at the cineplex, you can certainly find it in writer/director Emerald Fennell's Promising Young Woman, and my only hesitancy about strongly recommending the movie lies in wishing I could recommend it more. No trailers this year have filled me with more giddy eagerness than those for this nasty black comedy in which Carey Mulligan's 30-year-old Cassie Thomas turns the tables on “well-meaning” sexual predators by pretending to be blackout drunk at bars and, after being “safely” taken to her escorts' one-bedroom lairs, turning instantly, aggressively sober. From their use of Britney Spears' “Toxic” (a tune as effectively employed as Luniz's “I Got 5 on It” was for the trailers to Jordan Peele's Us) to the sight of the normally sweet, sane Mulligan pulling out surgical equipment while dressed as Harley Quinn in nursing attire, these two-to-three-minute pastiches hit me in my jaded sweet spot every time. Fennell's film, alas, isn't quite as satisfying as its promos. But the next-best thing to freaking awesome is still awfully darned good.

To get the major disappointment out of the way – and this might be an understandable deal-breaker for many – your enjoyment of the film is going to require some suspension of disbelief. Like a comic-book-movie suspension of disbelief. According to Cassie's notebook in which she records tallies of her bar-lothario comeuppances, she has apparently performed her vengeful weekend ritual hundreds of times over just a few years, most of them spent in the same suburban community; just how many predatory assholes can one upper-middle-class neighborhood accommodate? (Maybe I don't want to know.) But also, in order for Fennell's narrative to work through to its conclusion, characters are required to behave precisely as Cassie expects them to in every given circumstance, and in precisely the time-frame she's planned for. This promising young woman trained to become a doctor, but her abilities seem more suited to those of a psychic.

Yet if you can get past those and other plot holes that one could conceivably drive trucking convoys through, Fennell's feature-film debut as a writer/director is intensely enjoyable and, at the finale, more emotionally overpowering than you may have anticipated. (Only in the final seconds are we given a full understanding of Cassie's sadness, guilt, and wickedly macabre sense of humor.) Considering that its synopsis makes the film sound awfully rough, and it sometimes is, it was wise and canny of Fennell to populate her outing with so many recognizable comic talents, and her stupendously well-chosen ensemble finds room for Jennifer Coolidge, Laverne Cox, Adam Brody, Max Greenfield (his trademark grin absolutely terrifying here), Christopher Mintz-Plasse, Molly Shannon, and the wonderful Alison Brie. (Traditionally dramatic actors are represented in the first-rate casting of Clancy Brown, Connie Britton, and Alfred Molina.) Bo Burnham is spectacularly endearing and funny as Cassie's potential love interest, leading you on an implied rom-com trail that you rightly sense won't have a genre-approved rom-com ending. Fennell cleverly employs cheerful pop tunes for apprehension and candy-colored hues for dread. And through it all is Carey Mulligan's dazzling virtuosity as wildly yet empathetically damaged goods donning a facade of normalcy; Cassie seems like the most level-headed person around until the depths of her desperation slowly begin to reveal themselves. Promising Young Woman is more of a mess than I hoped it would be. It's also more fascinating and moving than I dared hope it would be.

For reviews of Wonder Woman 1984 and Soul, visit “Lassos, Fanny Packs, and All That Jazz.”