Santy Claus Ain't Comin' to Town: More Laughs in the Time of COVID 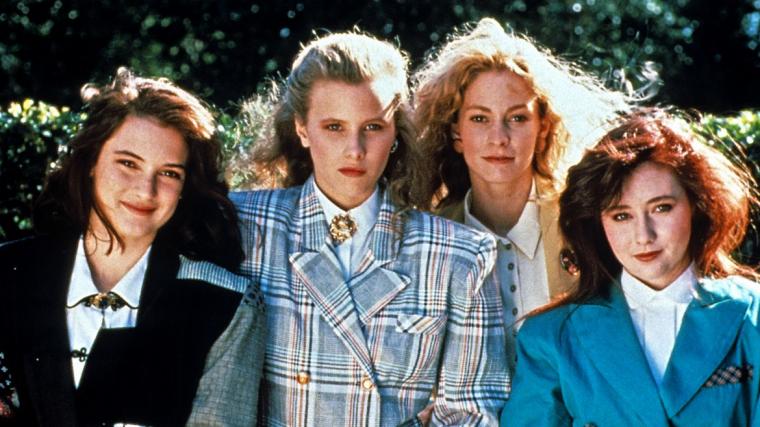 I guess you know you've been self-quarantining for a long time when you realize you're now writing sequels to articles you wrote when the self-quarantining began. But I also didn't come nearly close to praising all the comedies I wanted to five weeks back, so a sequel we all get! Besides, you can either spend eight hours reading about and then watching these five excellent titles from 1985 to 1994 or watch Tiger King for the seventh time, so … . 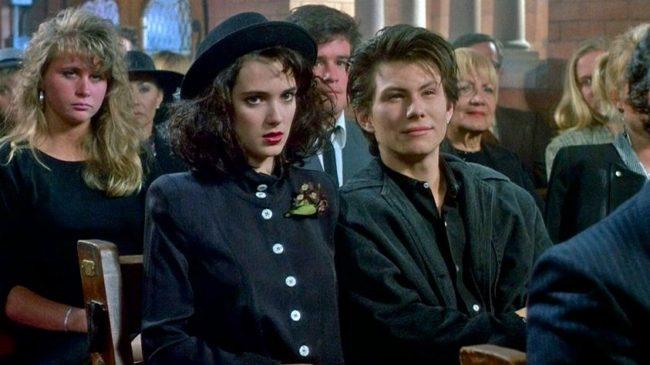 Heathers: As I remember it, the auditorium was pretty packed, which seemed weird. Granted, it was opening weekend, and my friend Angie and I were at the screening of a new high-school comedy – a genre that was money in the bank in the spring of 1989. But still, I thought: Why are so many people here to see Heathers? Its star Winona Ryder was only known for playing that black-clad weirdo in Beetlejuice and the cute girl who had a crush on Lucas. Her romantic interest Christian Slater was equally famous/not-famous. There were no other names in the cast. (90210 was a year away for castmate Shannen Doherty.) Director Michael Lehmann had never made a film. And while the reviews were strong and suggested a particularly biting dark comedy, it was still a tiny indie with little in the way of an advertising budget; I don't recall seeing a single preview either at the movies or on TV. Yet a crowd showed up anyway. And I would bet almost anything that those people remember that screening as well as I do, because that experience was nuts, boasting some of the loudest and longest laughs I've ever heard at the cineplex, and most of those laughs also expressions of shock. Its tale of teen murders disguised as suicides is still subversive, of course, and possibly more controversial now than it might've been three decades ago. For a demographic weaned on John Hughes, though, Lehmann's devilish feature was positively mind-blowing, so profanely funny and offhandedly nihilistic (and so under-the-radar!) that it felt like something only those of us in that theater would ever get to see – something “the grown-ups” would surely pull from release once they saw how much fun we were having. Now the film's iconic. How very. 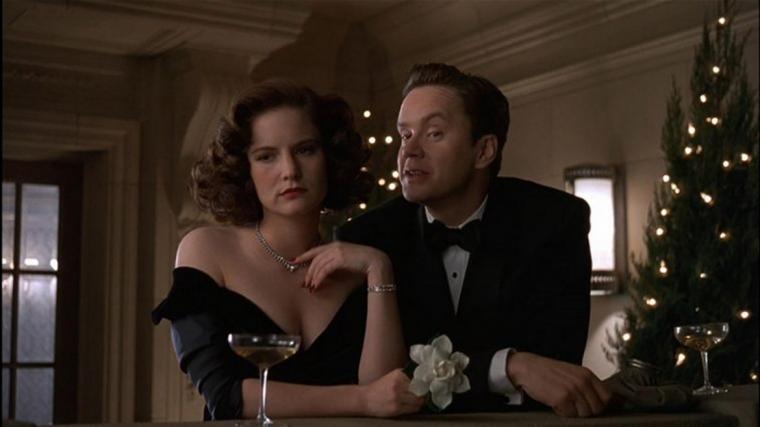 The Hudsucker Proxy: No one will ever accuse the Coen brothers of being underrated. But if there's one title on Joel and Ethan's filmography whose greatness has been almost criminally ignored, it's gotta be this one. I mean, come on: Tim Robbins' wannabe inventor achieving big-business immortality through his design of a simple circle. (“You know … for kids!”) Charles Durning crashing through a skyscraper window and gesturing to passers-by that they may wanna clear the sidewalk before he lands. Paul Newman's life being saved by his double-stitched trousers. John Mahoney's newspaper editor barking orders and Bruce Campbell's two-bit reporter cracking wise. Those two sad-eyed Damon Runyan characters concisely narrating a diner con job and quietly begging the waitress for “Bromo.” As I've mentioned several times in these pages, the Coens are frequently smarter than most of their audiences – and certainly frequently smarter than me, given how many times I've left one of their films underwhelmed only to fall in love with it years down the line. But this stunningly well-designed and -shot giggle-fest about the world's luckiest hayseed was a beginning-to-end-blast even on a first viewing, with Jennifer Jason Leigh's inspired turn as a driven investigative journalist – “I'd bet my Pulitzer on it!” – an ultra-ripe Katharine-Hepburn-in-the-'30s parody/homage that should've made the indie darling a massive star. I could watch Leigh's tragic attempt at singing along to the Muncie High fight song on a day-long loop with little complaint, and just when you begin worrying that this comedic locomotive may have run out of steam, Durning shows up again to offer Robbins some words of wisdom, which he dutifully does in wings and a halo. Even after more than a quarter-century, The Hudsucker Proxy is nearly guaranteed to provide 50 laughs. Maybe 51. Not counting the mezzanine. 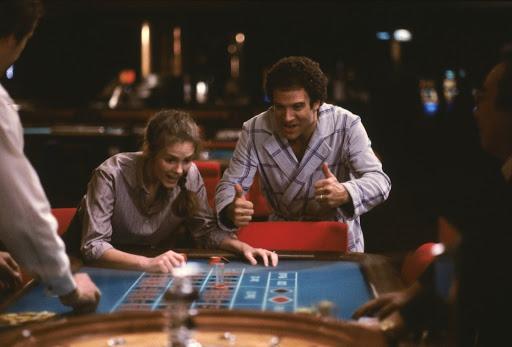 Lost in America: Yuppies, the cutesy nickname for young urban professionals, were all the rage in the 1980s. (I suppose they still are, even if the nickname isn't.) And no comedy from that decade satirized and annihilated the cliché of the entitled upper-middle-class with more glee than this 1985 classic written and directed by star Albert Brooks. Its initial setup is promising, with Brooks' successful ad man, after missing out on an expected promotion, quitting his job in a huff, liquidating his assets, and hitting the road with wife Julie Hagerty, an RV, and several hundred thousand dollars. But when the narrative switcheroo lands, with Hagerty blowing their entire nest egg (“give or take a thousand”) at a Vegas roulette wheel, Lost in America instantly blasts off into the neurotic stratosphere. If apoplexy had arms, legs, and curly brown hair, it would look exactly like Brooks does after he learns of Hagerty's gasp-inducing whoopsie-daisy – a meltdown all the more hysterical for being delivered in a strangled croak. Yet Brooks' greatest hits just keep coming: his increasingly desperate plea for a refund with Garry Marshall's not-having-it casino manager (“We're finished talking”); Brooks' interview at a temp agency, asking if there are any opportunities in the $100,000-per-year range; his RV conversation with Hagerty's new boss who's just a wispy mustache beyond puberty. Don't get me wrong: Hagerty is mighty funny, too, and Marshall endeared himself to a generation with his tough-guy pronunciation of “Santy Claus.” Brooks, though, has never been more cackle-inducingly wonderful than in this early triumph, and as much as I adore Defending Your Life and the first half of Mother, nothing he's ever done has given me as much pleasure as the 90-minute meltdown he delivers here. “I've lost a woman,” he whines after Hagerty momentarily abandons him. “A whole woman.” 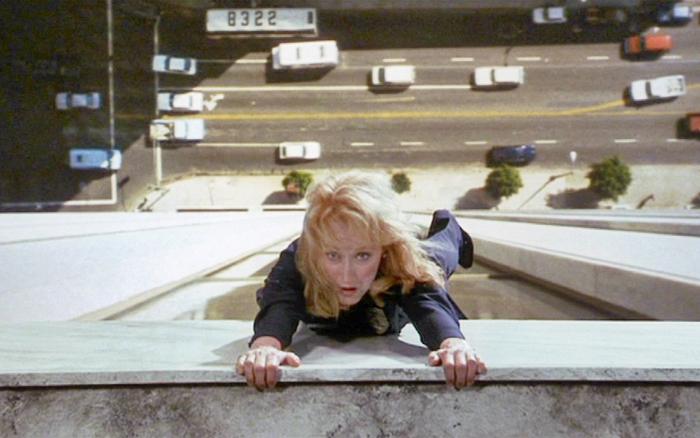 Postcards from the Edge: After she'd been a star for a decade, it was pretty clear that Meryl Streep could do anything. But that didn't mean she did everything, because beyond headlining Mike Nichols' comedy-in-name-only Heartburn and co-starring opposite Roseanne Barr in the awful She-Devil, Streep's movie appearances were restricted to dramatic, largely tragic roles, most performed in voices that weren't her own. (Critic Pauline Kael famously dubbed her “Our Lady of the Accents.”) So it was the happiest of surprises when Nichols' Postcards from the Edge opened in the fall of 1990 and showcased Streep as a witty, nimble comic talent, and even allowed her to play a character that – although based on the film's screenwriter Carrie Fisher – spoke uncannily like Streep herself. Considering our familiarity with her résumé, I think it was an in-joke that Streep's first scene as troubled starlet Suzanne Vale finds her unconscious after a drug overdose; of course a Meryl Streep comedy would open with the imminent threat of death. But Streep brings the laughs from the moment Richard Dreyfuss' ER doctor tells the groggy Vale that he's going to pump her stomach (“Do I have to be there …?”), and until the material eventually offers more sentiment than silliness, she's thoroughly riotous in both her vocal inflections and physical choices. With much of the movie a satiric roast of Hollywood types, there are loads of second bananas with whom Streep verbally (and beautifully) parries, among them Shirley MacLaine, Dennis Quaid, Gene Hackman, Rob Reiner, Oliver Platt, Simon Callow, and Annette Bening. Yet nothing here is more winning than Streep's evident performance joy as she subtly scores laugh after laugh – except maybe her climactic country solo that's sold with soaring, fearless, twangy gusto. The song is titled “I'm Checkin' Out.” Check her out. 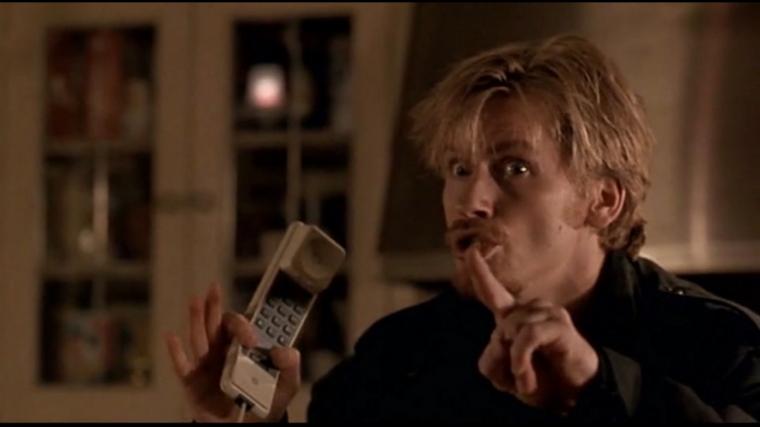 The Ref: Of all the once-ubiquitous talents whose appearances now make me squirm whenever I see them – Bill Cosby, Louis C.K., Matt Lauer – Kevin Spacey breaks my heart the most, because man did he make loads of movies I love. American Beauty, The Usual Suspects, L.A. Confidential, Seven … . While I wish I could build up the tolerance to view any of them again, for the time being, I just can't. (I was really enjoying re-watching 1988's Working Girl recently, and then, dammit, he popped up there, too.) But the Spacey film I most miss might actually be this 1994 slapstick by director Ted Demme – a poisoned gumdrop of a Christmas comedy that casts the deposed President Frank Underwood and Judy Davis as hatefully married suburbanites held hostage by Denis Leary's home burglar. Almost nobody saw this laudably nasty outing when it was first released, and it certainly hasn't achieved the holiday-flick following enjoyed by, say, Home Alone or National Lampoon's Christmas Vacation. But from the mean-spirited hilarity of Spacey's and Davis' couples-therapy session to Leary's endless variations on a certain profanity that starts with an “f,” The Ref is delightfully vicious, if, eventually, also kind of sweet. Leary earns the highest yuks-per-minute ratio as his dumbfounded thief reaches higher and higher states of high dudgeon, most of them while drenched in cat urine. (God bless us, everyone!) Spacey and the exceptional Davis, though, are a tartly matched pair, Christine Baranski does her Christine Baranski thing flawlessly, and if you're a Mary Poppins fan, you might want to be near your fainting couch when Mrs. Banks herself Glynis Johns, who was 71 at the time, smacks Leary down with a disdainful “You don't have the balls.” Hey, just because I can't watch the film doesn't mean you shouldn't!