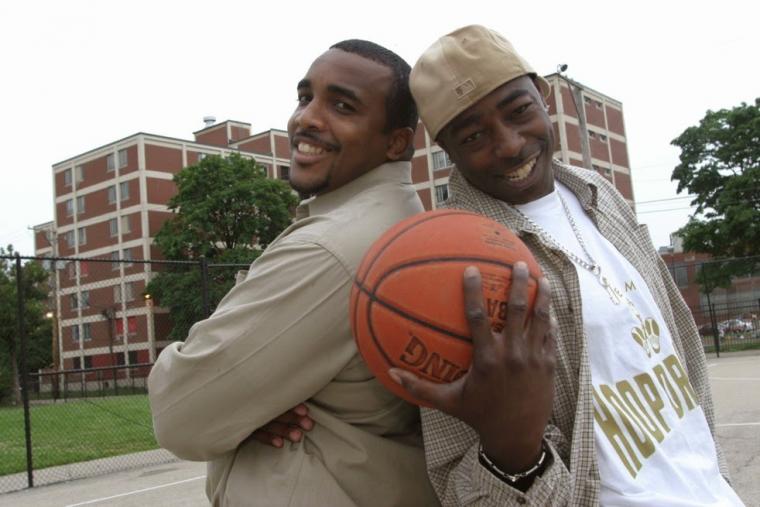 Whenever I drive to work from Rock Island to Davenport, I take the Centennial Bridge, and it's impossible these days not to pass Modern Woodmen Park without feeling nostalgic for the simpler times of, you know, last year. Even if it was eight o'clock on a freezing December morning, you would drive by that stadium and its Ferris wheel and know that baseball season, and the kinder weather accompanying it, would return eventually. Well, the weather of late has been pretty terrific. The baseball, though? Not a relevant question.

But baseball movies, as well as movies about every other conceivable sporting event, can at least always be enjoyed, and might be the closest we currently have to collectively cheering and bawling during our favorite athletic events. So if you find yourself missing sitting in stadiums and arenas, or even in front of the TV, with your best friends and some nachos and a cold beer or four, consider turning or returning to one of these five – make that six – outstanding, inspiring sports films from 1981 to 1996. Advance apologies to those looking for golf movies. Might I suggest that you instead get outdoors and golf? 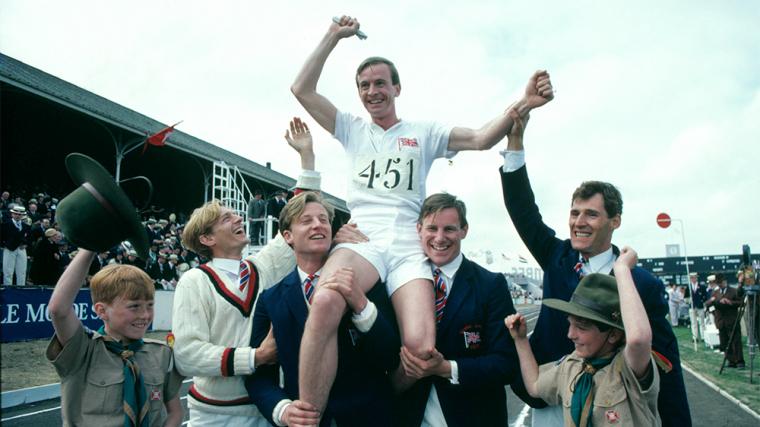 If you miss the Olympics – Chariots of Fire: Admit it: You can't even read that title without conjuring images of runners in ecstatic slow motion, be they Olympic hopefuls on a beach or Clark Griswold and family racing in vain toward Wally World. You also can't get that iconic, Oscar-winning Vangelis composition (dun dun dun dun du-u-u-u-u-un du-u-u-un …) out of your head – a chart-topping synth tune that's become such a cultural cliché it's been appropriated by everything from Nike ads to Steve Jobs' original Mackintosh demo to the Jim Carrey slapstick Bruce Almighty. But have you actually seen Chariots of Fire? I ask because, with only a few exceptions, no one I know has. And that's a shame, because 1981's colossally unexpected Best Picture winner is fantastic – a little slow, yes (oh the irony), but supremely thoughtful and moving, and as deserving of climactic cheers as any of the Rockys. Based on the true stories of two 1924 Olympians, the Scottish Christian Eric Liddell and the English Jew Harold Abrahams, director Hugh Hudson's drama is an intimate character piece that just happens to boast stadiums full of roaring fans, with Liddell running in celebration of God and Abrahams sprinting in opposition of religious bigotry. That may sound lofty, and perhaps lacking in the driven intensity of such similarly themed works as 1982's Personal Best and 1998's Billy Crudup vehicle Without Limits. Hudson's achievement, though, is quietly riveting history that's also hugely satisfying as a tony sports flick, and it's sublimely acted by Ian Charleson (as Liddell), Ben Cross (as Abrahams), and familiar British thespians including John Gielgud, Lindsay Anderson, Harry Potter alum Richard Griffiths, and Oscar nominee Ian Holm. At one point, Holm punches straight through his hat out of sheer joy. That's why I don't wear a hat when watching this. 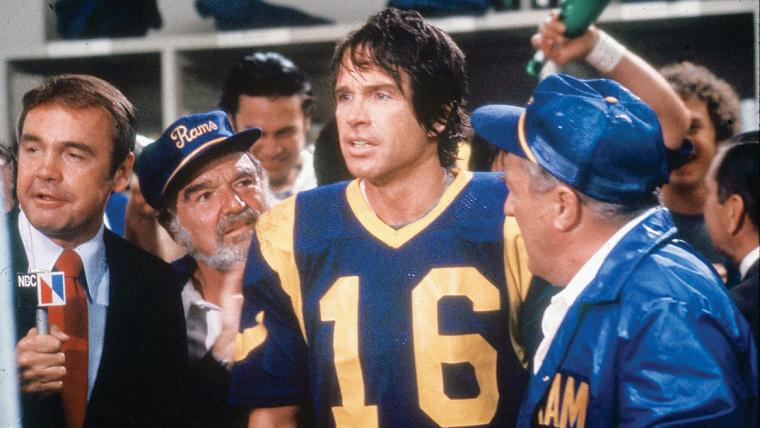 If you miss football – Heaven Can Wait: Even allowing for my not listing titles I've previously reviewed, which puts such logical and worthy options as Friday Night Lights, Remember the Titans, and When the Game Stands Tall out of contention, I'll admit that citing director/co-stars Warren Beatty's and Buck Henry's 1978 fantasy comedy here might seem odd. Especially, I suppose, when you consider possible alternatives: 1993's Rudy, which seems to be everyone's favorite triumph-of-the-underdog sports flick; the macho '70s comedies The Longest Yard and Semi-Tough and North Dallas Forty; 1971's legendary TV-movie Brian's Song, which leaves generations of male viewers sobbing into their big foam fingers. Yet I'm opting for Heaven Can Wait regardless, not only because it's absolutely delightful (and newly streaming on Prime Video), but because, if you ignore the film's metaphysical bent, it's practically the quintessential inspirational football movie: A professional quarterback longs to play in the Super Bowl, faces harrowing obstacles and seemingly impossible odds, and eventually gets there! What I'm leaving out, as fans of this Oscar winner know, is that the chief obstacle confronting Beatty's Joe Pendleton is his death, the man having been accidentally taken to Heaven, and his earthly body cremated, long before the Los Angeles Rams make it to the Super Bowl. Yet beyond being a touching romance for Beatty and Julie Christie, as well as a fantastically witty supernatural farce for Henry, James Mason, Joseph Maher, Vincent Gardenia, and the priceless pairing of Dyan Cannon and Charles Grodin, this charmer-for-all-demographics is a glorious celebration of Pendleton's endless love for his sport, leading to a legitimately rousing gridiron finale and perhaps the finest sound mixing of any 20th-century football movie. (The roars of the L.A. crowd, as they should be, are deafening.) Oh yeah, and Jack Warden will make you cry. What's an inspirational sports flick without weeping?! 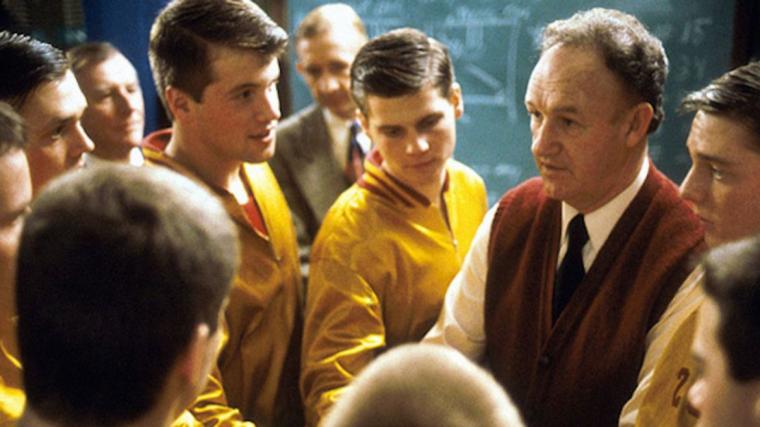 If you miss basketball – Hoop Dreams and Hoosiers: You could chalk this tie up to indecisiveness or waffling – or perhaps just stupidity, given that one of these titles is predictable (if intensely rewarding) sports uplift to its teeth, and the other is among the all-time-greatest American documentaries. But considering they're currently sitting right next to each other on my alphabetically ordered DVD shelf, I'm afraid that if I chose only one, the other would stare at me forlornly, whimpering, “But what about me-e-e?” Besides, if you have five hours to spare, you couldn't ask for a more satisfying basketball-themed double-feature. Three of those hours would be spectacularly well-spent at director Steve James' 1994 Hoop Dreams, which follows Westchester, Illinois high-schoolers Arthur Agee and William Gates from their freshman years through their early college days, and offers more potent, affecting explorations of race, class, and systemic oppression than nearly any other movie I can think of. James' film also provides lots of basketball, and in a genre known for its knuckle-whitening presentations of The Big Game, the many Games in this sports film are all Big, and all have direct correlations to our protagonists' potential futures; they may not be about life and death, but they're most assuredly about life and hopes for a better life. It's one of the most stunningly empathetic and honest mosaics of youthful determination and talent I've seen … and kind of makes director David Anspaugh's Hoosiers feel puny in comparison. But what extraordinarily effective puniness! Gene Hackman in demanding-but-fair coach mode, giving one of his least-heralded great leading performances. That gorgeously subtle and evocative small-town-Indiana-in-the-'50s period design. That lump-in-the-throat Jerry Goldsmith score. The face of Maris Valainis' Jimmy as he sees the fate of the game – maybe his whole town – resting on one impossible throw. It's all sentimental as hell and completely formulaic, and I couldn't love it more if I tried. I don't even mind that Dennis Hopper, who's wonderful as the local drunk, was Oscar nominated for this 1986 release when he obviously deserved it more for that same year's Blue Velvet. Well … I don't mind much. 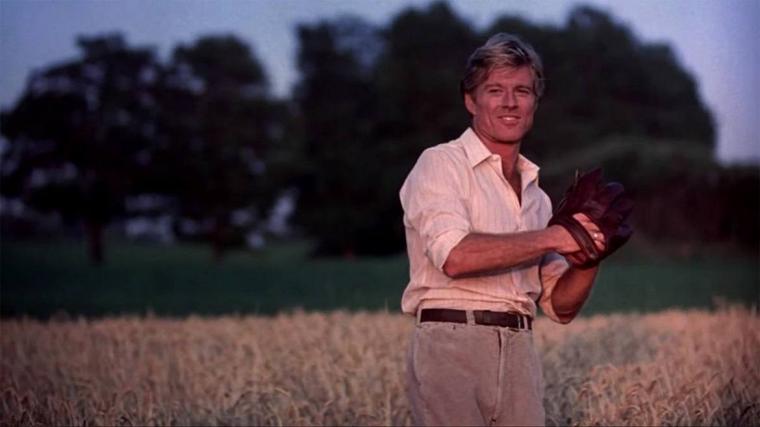 If you miss baseball – The Natural: I initially considered making this entire article baseball-specific, because even though I recently wrote about Field of Dreams, it was easy to amass a lineup of excellent national-pastime titles by citing The Bad News Bears, A League of Their Own, Bull Durham, and Eight Men Out … even if that last inclusion, John Sayles' downbeat exploration of the 1919 Chicago White Sox scandal, doesn't make you cry from happiness so much as mortification. Yet if (self-)forced to choose only one, I gotta go with this irresistible 1984 hit – an entertainment with just slightly more corn than Ray Kinsella's unplowed fields. As an adaptation of Bernard Malamud's leaner, darker 1952 novel, director Barry Levinson's adaptation is pretty indefensible; it's like if the Book of Revelation's film version ended with God popping out to say, “Just kidding! Everything's fine!” (Robert Redford's Roy Hobbs is certainly lit like the almighty – or at least one of his blonder angels.) I'm sorry, though: I can't help but adore this tale of an aging slugger's attempts at personal and professional comebacks, with composer Randy Newman's soaring, stand-and-salute-the-flag score grabbing you from the first seconds and not letting go until the closing credits. In truth, Redford looks a little distracted throughout, and I still can't tell if it's a character choice or just the star's usual reticence. But excepting the equally reserved Glenn Close, Redford is surrounded by on-fire performers: Robert Duvall, Kim Basinger, Wilford Brimley, Richard Farnsworth, Barbara Hershey, Joe Don Baker, Robert Prosky, Michael Madsen, the uncredited Darren McGavin. And The Natural's baseball sequences are all dynamite, with the most memorable bits including Hobbs' astounding early batting practice, the homer that smashes the stadium clock, and, especially, the climactic fireworks display following the unexpected demise of Wonderboy. Totally corny. Totally shameless. Totally great. 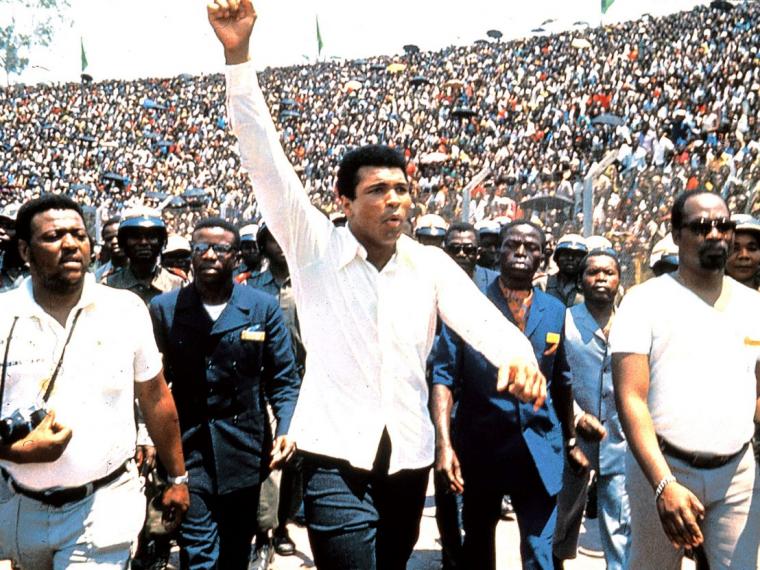 If you miss boxing – When We Were Kings: In a 1999 episode of Aaron Sorkin's Sports Night, the staff spends much of the sitcom's half-hour determining who should be named “Athlete of the Century,” with the team's exasperated producer finally saying, “I say we just go with Muhammad Ali and be done with it.” Everyone else immediately raises their hands in agreement: “Muhammad Ali!” And if you don't know why Ali's name would lead to such instant consensus, you need to catch director Leon Gast's thunderously powerful, Oscar-winning 1996 documentary When We Were Kings, a look back at 1974's legendary “Rumble in the Jungle” heavyweight match between Ali and George Foreman, and perhaps the finest film about boxing – and one boxer in particular – ever made. With its splendidly restored archival footage accompanied by the arresting recollections of Spike Lee, Norman Mailer, George Plimpton, and others, Gast's remarkable accomplishment is a fount of electrifying historic material: Ali's political speeches and refusal of the Vietnam War draft; his god-like reception upon arriving in Zaire; his and Foreman's training regimens and their undisguised contempt for one another in and out of the ring. (Has any other athlete ever come close to delivering press-conference braggadocio with Ali's blend of humor and finesse?) However, the film's heart lies in the televised Rumble itself as, while watching them, we receive fascinating explanations of extraordinary techniques such as Ali's unexpected right-land leads and the rope-a-dope that sent Foreman to the canvas in the eighth round. The match is brutal yet beautiful, and like Gast's documentary itself, it leaves you simultaneously wiped out, elated, and eager to see it again. At the very end, Plimpton recounts an Ali poem that in its entirety – “Me? Whee!” – is possibly the shortest ever written. Considering the poet, it might also be the most inarguable.