A Trip to the Moon: “First Man” and “Gosnell: The Trial of America's Biggest Serial Killer” 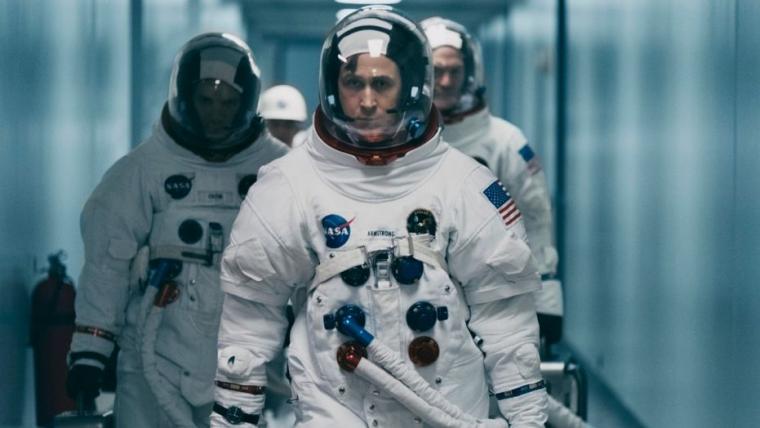 Damien Chazelle's Neil Armstrong bio-pic opened this past weekend, and viewed strictly on a technical level, it's a virtuosic work, one boasting hand-held camerawork and earth-shaking sound effects that effectively put you, cramped and uncomfortable (and also kind of exhilarated), right inside lunar capsules along with our hero and his fellow NASA recruits. Yet despite being titled First Man, what I left my screening really wanting to talk about was the film's First Lady, given that Janet Armstrong portrayer Claire Foy and the focus extended to the character make Chazelle's La La Land follow-up far more engaging than it might've otherwise been.

This won't be an opinion shared by everyone. It's even easy to guess who'll groan or laugh at the suggestion the hardest, because they're the same people who would've loved Breaking Bad and The Sopranos more if those shows, early in their runs, had killed off Skyler White and Carmela Soprano – you know, the wives and mothers whose teary reprimands kept draining the fun out of their spouses' drug deals and murders. As designed by Chazelle and screenwriter Josh Singer, First Man's Janet fits solidly in that Skyler/Carmela mold, albeit in support of a legitimate hero rather than an anti- one. Foy, meanwhile, is given the requisite scenes of domestic anxiety, with her astronaut's wife nervously listening to the NASA squawk box as Neil (Ryan Gosling) embarks on his perilous flights, and demanding that her husband tell their sons that Dad might not come home from his mission to the moon. Janet, in short, is the sort of role that's frequently referred to as “thankless.” In this instance, however, I'd like to offer some well-deserved thanks.

Although First Man's first scene finds Neil, as a test pilot, literally bouncing off the atmosphere in an X-15, the many minutes that follow are decidedly more earthbound, with the future moon walker and his wife experiencing the finals days of their two-year-old daughter Karen, who's suffering from a malignant brain tumor. We see Karen, frightened and in pain, enduring CAT scans and vomiting in the toilet, and being held by her obviously heartbroken father as he reads stories and sings lullabies; later, at the funeral reception in the Armstrongs' home, Neil enters his study, shuts the door, and sobs. Long before Chazelle's film gets to its NASA business, the Armstrongs (and the movie's audience) are awash in grief, and it's more than strongly suggested that Neil volunteered for the space program principally as a means of distracting himself from his debilitating sorrow. But while he's given an outlet in the staggeringly complex mathematical and physical demands of his job, Janet is given no outlet at all – unless you count cooking, cleaning, and caring for the children. (The Armstrongs had one son four years before Karen's 1962 passing, and another the year after.) And much as some viewers may wish otherwise, Chazelle, Singer, and Foy – the latter with her wide, expressive eyes that seem forever on the verge of tears – never let you forget how much of Neil's public triumph was Janet's private hell.

Even during its sequences of intense training and dramatic press conferences, First Man's narrative frequently swings back to Janet, who's sometimes shown merely reprimanding her kids or sneaking a cigarette on the front porch. But these moments don't feel like the usual time-killing, and they also don't feel like a halfhearted attempt to remind us of Neil's family when even he appears to have forgotten them. Instead, Chazelle and Singer turn Janet into the movie's ferociously beating heart. She has to be, because otherwise you'd be hard-pressed, in this film, to hear one beating at all.

Gosling's über-stoicism is definitely impressive, and he underplays with enough variety and buried emotion that Neil emerges as touching despite, in the end, our never really getting to know him. (In this regard, he's much like Gosling's jazz musician in La La Land and Miles Teller's perfectionist drummer in Chazelle's Whiplash: obsessives whose desire for greatness outweighs all human interaction, and always comes at the expense of their romantic lives.) But Neil is too often portrayed as an unreadable vessel of broadly defined ambition, drive, and half-smiles that don't offer a clue about what the smiler is thinking. And despite boasting a huge cast of talents – among them Jason Clarke, Kyle Chandler, Ciarán Hinds, Shea Whigham, Patrick Fugit, Ethan Embry, Christopher Abbott, and Lukas Haas – none of First Man's astronauts and scientists emerge as anything more solid, more complicated, than a character sketch. Even Corey Stoll, as Buzz Aldrin, has been given nothing to play but “asshole,” and the one-note noxiousness of the role makes you wonder whether the real-life Aldrin once knowingly ran over the filmmakers' dogs, and Chazelle and Singer are finally getting their revenge.

I certainly felt something, though, whenever the radiantly present, oftentimes thunderously angry Foy was on-screen. And thanks to the wondrous acumen of Chazelle and his technical team, I also felt as close to the experience of being catapulted into space as I ever want to. There are moments in the film in which the director overdoes his employment of cinematographer Linus Sandgren's hand-held camerawork, as there's really no need to turn simple domestic scenes into Hardcore Harry in Houston. But the dizzying, deafening POV shots as Neil's capsules leave the planet are astoundingly visceral – when heading into space, our only views of the trek upward come through a tiny window above the astronauts' heads – and the movie is rife with scenes whose realness almost physically hurts, especially in the preamble to the accidental deaths of Gus Grisson, Ed White, and Roger Chaffee. (This tragedy that was only mildly, belatedly referenced in Philip Kaufman's astronaut masterpiece The Right Stuff is heartbreakingly dramatized, and concludes with an image of subtly horrific elegance.)

The sound effects, meanwhile, are unerringly sensational, particularly when what you're hearing are the heavy clunks and bangs of metal on metal; on an aural level, the prep for the NASA missions hardly instills confidence, and that's when characters aren't asking one another questions such as “Has anybody got a Swiss Army knife?!” (That query gets a deserved reaction from Neil, whose eyes understandably pop.) And even though Justin Hurwitz's generally first-rate score leans toward the bombastic in the final minutes, and Chazelle and Singer deliver a sentimental sucker punch that isn't any less shameless for being effective, the climactic moon landing and Neil's exploration of the natural satellite is visually majestic regardless of whether we actually watch that flag being planted. Without question, First Man is a considerable professional achievement. Excepting rare moments with Gosling and just about every moment with Foy, I just wish it were also a more human one. 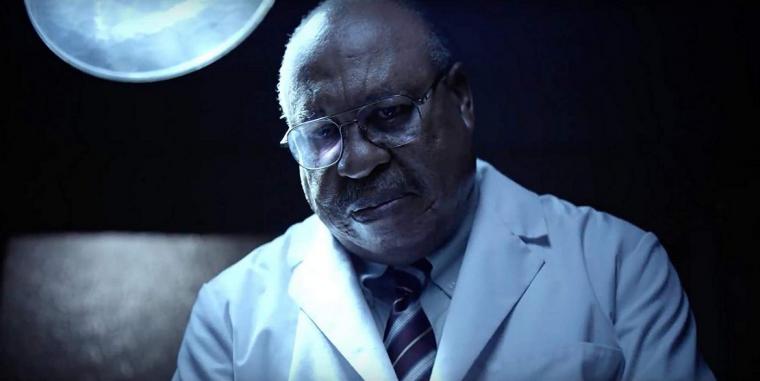 At one point in the proudly pro-life, anti-media Gosnell: The Trial of America's Biggest Serial Killer, a Philadelphia detective played by Dean Cain confronts a pesky blogger by saying, “If I hate the press, it's just because you guys lie all the time.” That line was greeted by a smattering of applause at my screening. Consequently, as a newspaper employee myself, I'm guessing that those applauding patrons (and plenty of others with similar beliefs) wouldn't believe me if I said that while I didn't care for the movie, I didn't exactly hate it, either.

True, director/co-star Nick Searcy's police procedural is professionally wanting in the manner of many low-budget faith-based films, with the characters more often speechifying than speaking and editor John Quinn apparently doing his best to sabotage the performances by consistently holding actors' reaction shots for two or three beats too long. (At the ends of scenes, the performers tend to look anesthetized.) And while the real-life story of Kermit Gosnell – a former abortionist convicted of murdering three infants who were born alive during his procedures – is horrifying and eminently worth telling, I wish it had been told without quite so many Grand Guignol flourishes, with Gosnell's “clinic” shown as a decaying horror show overflowing with cat shit on the floor, fetusus in garbage bags, and baby feet in jars. (Perhaps this is what Gosnell's actual workplace looked like, but it feels more like we've wandered into a particularly unsavory season of American Horror Story.)

Yet as bad as it is, the film has its perks. Cain, beefier now than in his TV-Superman days, is an amusingly smug presence, and his earnest co-star Sarah Jane Morris looks just enough like early-1990s Michelle Pfeiffer to be kind of riveting. Playing Gosnell, Earl Billings is too often forced to telegraph his villainy through facial tics and debauched chortles, but he creates a memorably sinister image with his easy smile and sweater vests: Cliff Huxtable as Jack the Ripper. (And Cliff, in hindsight, is already pretty sinister.) A witness for the defense is played by Janine Turner. Janine Turner! I don't think I've seen her since Northern Exposure! And as much as I loathed his methods, it's hard to argue that Searcy doesn't know how to play his intended audience like a fiddle, delivering verbalized reminders that Gosnell is not like most abortionists while not-so-subtly stoking the crowd's collective belief that it doesn't matter, because they're all equally monstrous. So, too, is every member of Gosnell's imagined media, though Cain's cop does come around to slightly appreciating the efforts of that pesky blogger (an admirably tart Cyrina Fiallo) after she posts a series on reporters' conspiratorial refusal to cover the Gosnell case. So if I have this correct: abortion bad; mainstream news media bad; conspiracy-minded bloggers kind of good. Damn these out-of-touch filmmakers with their liberal agendas.

For reviews of Bad Times at the El Royale, Colette, and Goosebumps 2: Haunted Halloween, visit “Welcome to the Hotel California/Nevada.”