When Worlds Collide: "The Day the Earth Stood Still," "Nothing Like the Holidays," and "Delgo" 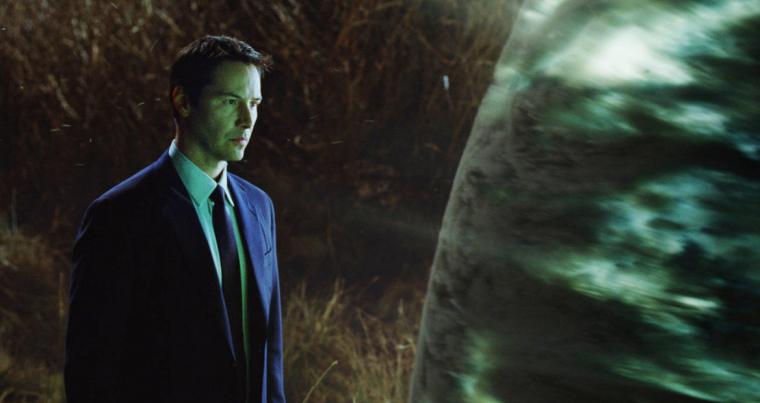 Our market, meanwhile, only got The Day the Earth Stood Still, Nothing Like the Holidays, and Delgo.

THE DAY THE EARTH STOOD STILL

In director Scott Derrickson's remake of The Day the Earth Stood Still, Keanu Reeves plays an alien life form in the body of a human, and does so with an inexpressive deadpan, a monotone earnestness, and an unchanging air of blasé indifference. How did the actor ever pull off such a miraculous change of pace? (Early on, this space-visitor-turned-earthling mutters, "This body will take some getting used to." No kidding.)

I really shouldn't make fun, though; in the end, Reeves is about the only thing here not deserving of mockery. Obviously, we're not meant to take Derrickson's movie very seriously from the outset, because when Jennifer Connelly's brilliant astro-biologist is asked her Social Security number in the film's opening minutes, it only has seven digits. But one element after another here is worth a hoot and a few raspberries: the strident moralizing, during which we're endlessly reminded that Humans Aren't Worthy of Their Planet; the clunky exposition; the lame effects as our species is threatened by skyscraper-sized aggie marbles and a cycloptic Oscar statuette; Kathy Bates as a laughably obtuse secretary of defense; poor Jon Hamm wandering through the proceedings like Don Draper on a bender; the shameless, time-killing subplot in which the fate of the world proves just a little less important than Connelly forging a bond with her step-son (Jaden Smith, son of Will).

Lazily produced and half-heartedly executed, this new The Day the Earth Stood Still is the stupidest apocalyptic-disaster blockbuster since The Day After Tomorrow - how convenient that video-store shelves will soon have these movies sitting right next to each other - and its only claim to intelligence comes during a narrative detour, in which Connelly takes Reeves to visit her Nobel Prize-winning mentor. If I were going to convince a superior being that life on Earth was indeed worth saving, I'd bring him to John Cleese's house, too. Nothing Like the Holidays, which finds a Chicago-based Peurto Rican family gathering to celebrate Christmas and confront sins of the past, isn't that well written - if the clan is gathered around a dinner table, you can be sure that dirty secrets and accusations will spill forth - and isn't that well filmed. (A scene of neighborhood residents joining in the celebration of the parranda might've been touching if the singing were in synch with the music, and if either were in synch with the on-screen images of the singing and the playing of instruments.) Yet this buoyantly sincere holiday offering is still exceptionally easy to sit through. The large, happy cast includes John Leguizamo, Freddy Rodriguez, Elizabeth Peña, Luis Guzmán, Jay Hernandez (as Leguizamo's Jewish-outsider wife), and Alfred Molina (British, yes, but convincingly Latin), and there are lovely details galore, such as Molina's rationale for not upgrading his decades-old chainsaw: "It has Chuck Norris on the box." God, how I wish Anne Bancroft were still alive; I'd give anything to hear her reaction to the animated kiddie flick Delgo. In this bizarre sci-fi excursion that pits a race of buff, shell-less turtles against a race of buff, humorless hummingbirds, Bancroft is cast as the evil Sedessa, a deposed Royal Hummingbird who leads a tribe of pissed-off hippos. (I'll give you a moment to wrap your brains around all that information.) It's anyone's guess what Bancroft - who passed away more than three and a half years ago - would make of the warring mishmash that ensues, but I'm hoping she'd be a little tickled by it, because the character she's voicing has been designed with perfect Barbie-doll proportions and continually skulks about in skin-tight jumpsuits, like a better-dressed (that is, dressed) Angelina Jolie in Beowulf. At age 70-plus, Bancroft was again invited to play a sultry, insinuating, big-screen vixen - all that's missing here is a scene in which the titular turtle greets her with, "Madame Sedessa, you're trying to seduce me."

Among this year's rash of crappy animated features, Delgo is at least more engaging than Space Chimps, Fly Me to the Moon, and that god-awful Star Wars: The Clone Wars, and it offers a reasonably diverting game of Name That Celebrity Voice; I had no problem identifying Freddie Prinze Jr., Malcolm McDowell, Michael Clarke Duncan, Eric Idle, and Burt Reynolds, but Jennifer Love Hewitt, Val Kilmer, and Kelly Ripa stumped me. (And I'm thrilled I didn't recognize Chris Kattan as Prinze's powerfully annoying and unfunny sidekick, as it kept me from spending 90 minutes muttering, "I f---ing hate you, Kattan.") But the movie is still plodding, derivative, senseless, and cheap-looking. This is, though, only one grown-up's opinion. I would've asked a kid if he or she felt the same way, but at the Saturday-afternoon screening of Delgo I attended, I was the only person there.