For Your Consideration ...: "The Lord of the Rings: The Fellowship of the Ring," "A Beautiful Mind," "Kate & Leopold," "Ali," and "The Majestic" The Lord of the Rings: The Fellowship of the Ring has now been out for so long, has made so much money, and has been reaping so many critical accolades - it was just named the AFI's Best Picture in its inaugural awards ceremony - that I'm not sure much more needs to be said about it.

The deserved praise I'd lavish on Peter Jackson's vivid recreation of J.R.R. Tolkien's universe would entail just about everything you're already aware of: The production design is spectacular, the pacing is leisurely but engrossing, the visual effects are often astonishing, the performers - especially the great Ian McKellen as Gandalf - are just right. In short, Peter Jackson and his collaborators have truly pulled it off, taking on a huge cinematic undertaking and succeeding in style.

If I sound less than completely enthused about the project, it's just my natural disinclination toward what I call "cloak movies," which are always filled with swordfights and horses and lots of mud, and whose paper-thin characterizations and generally stoic dialogue usually put me to sleep in 15 minutes. It's to Lord of the Rings' immense credit that my attention rarely waned - though several of the film's battle scenes have a nagging sameness to them - and I loved many of Jackson's smaller touches: Ian Holm's shocking, monstrous transformation when Frodo (Elijah Wood) threatens to take the ring from Bilbo Baggins; the crumbling-staircase sequence from your darkest nightmares; Sean Astin's surprising sweetness and delicacy as Frodo's pal Sam. The Lord of the Rings: The Fellowship of the Ring is an epic, to be sure, but it's Peter Jackson's attention to the most minute of details that makes this first entry in his Tolkien trilogy one-of-a-kind; those of us who are usually averse to the sword-and-sorcery genre might be surprised at how much we're looking forward to Jackson's second installment. At about the one-hour mark of A Beautiful Mind, while watching director Ron Howard's aggressively unimaginative staging and listening to his supporting actors deliver their lines with sitcom-honed sharpness, I couldn't wait to leave the theatre. About an hour later, I would've been happy for it to go on an hour longer. Not since Titanic have I seen a movie that was so terrible in its first half and so remarkable in its second; the film is almost as schizophrenic as its main character, and it's that unstable quality that, I think, makes the movie genuinely inspiring. A biopic of John Nash, the mathematical genius who battled lifelong schizophrenia and wound up the recipient of a Nobel Prize, A Beautiful Mind is a unique hybrid of the mundane and the surreal, and features one of the most clever screenwriting conceits I've ever been audience to (one that I won't dare reveal).

In fact, to discuss more is to risk ruining everything that's good about the film, so in the film's bipolar spirit, here's a bit of what you'll get: Ron Howard directs with his typically pandering, middlebrow smugness ... and shows a rough edge we weren't prepared for. Russell Crowe gives one of those show-offy, ticky, gimme-an-Oscar performances ... that ends up absolutely believable and affecting. Jennifer Connelly, as Nash's wife, has a role that's purely decorative ... until you realize she's not playing a doormat, she's playing a life preserver. Screenwriter Akiva Goldsman - of Lost in Space, no less! - can't write believable dialogue to save his soul ... but proves wickedly smart at subversive plotting and the gradual reveal. Put simply, A Beautiful Mind stands as both the apex and nadir of Hollywood moviemaking, and might just get better and better with repeat viewings. Sure, his work is TV predictable, and he's probably too genial to ever be a great director, but Ron Howard, amazingly, might still have a few surprises left in him. Let's face it: In Kate & Leopold, James Mangold's time-traveling romantic comedy, Meg Ryan doesn't look so good. Or rather, she looks fine, but a bit tired and sad and worn around the edges; there's a hint of middle-aged melancholy seeping into her persona and, I think, it's a refreshing change. Gone, at least for the moment, is the ultra-perky, bright-eyed, continually on Meg Ryan familiar from a dozen other movies of this ilk, and if you've grown tired of her predictable, heart-tugging feistiness, you might find yourself really enjoying her work here. She plays an unlucky-in-love advertising executive who falls for Hugh Jackman, a 19th Century dreamboat who finds himself in 2001 Manhattan, and she has a moment of startling poignance in the film when one of his romantic gestures releases in her a brief, audible sob; the Meg Ryan of Kate & Leopold has lived a little, knows what heartbreak feels like, and doesn't want to get burned again. She's really quite terrific here, and playing opposite Hugh Jackman unleashes something very real and appealing in her. Despite the contrived silliness of the plotting, the film does work a kind of magic: Ryan and Jackman play off each other with finesse, Breckin Meyer is incredibly funny in the best screen role he's yet had, and pros like Liev Schreiber, Natasha Lyonne, Paxton Whitehead, Philip Bosco, and Spalding Gray add to the fun. Kate & Leopold, goofy though it is, is perfectly enjoyable lightweight escapism, and easily Meg Ryan's best screwball comedy in more than a decade. 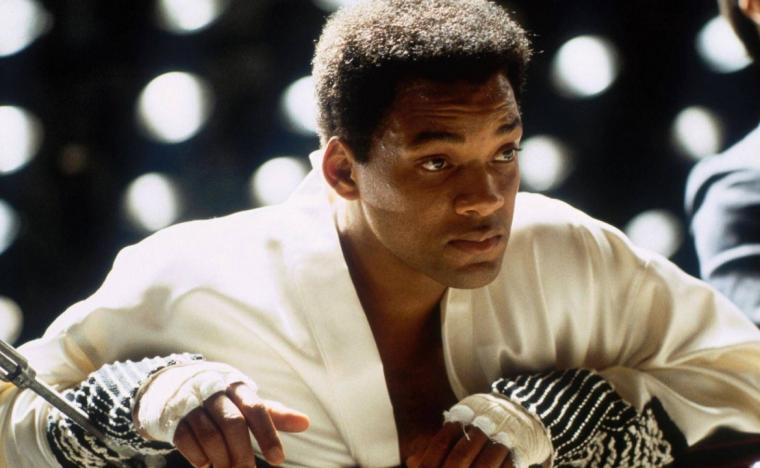 There's really only one big thing missing from Michael Mann's Ali, but it turns out to be something the movie can't live without: a reason for being. The film covers Muhammad Ali's personal and professional life from his heavyweight title fight with Sonny Liston in 1964 to his "Rumble in the Jungle" match with George Forman in 1974, and while it's made with remarkable professionalism, it reminded me of nothing so much as Milos Forman's bizarre take on Andy Kaufman in 1999's Man on the Moon. In both films, we're treated to incredible facsimiles of notorious occurrences, but the critical matter of why these events transpired the way they did is left unexplored. You really have no better understanding of Muhammad Ali after seeing the film than you had before; things just happen in his life, events unfurl, and that's that. Mann, along with his topnotch cast and crew, has dedicated an enormous amount of time, money, and talent to recreating this 10-year span in the world of Ali, but for anyone with even a basic knowledge of his story - and he was, at one time, probably the most recognized professional athlete on the planet - Ali itself feels empty. It's professionalism in a void.

In the title role, Will Smith is certainly up for this dramatic challenge; he's physically impressive, has the musical cadences in Ali's voice down pat, and does a fine job with Ali's showboating boasts. But it's easy to forget he's there, not because he disappears so thoroughly into the character, but because, as written, there's precious little to the character. By not giving us a hard look at Ali's internal life so that we could understand the whys, the director and screenwriters deprive us, and Smith, of any deeper affinity with the man. Smith pulls off a tip-top Ali caricature, but nothing more. (The same could be said for Jon Voight as Howard Cosell, Jamie Foxx as Drew "Bundini" Brown, and Mykelti Williamson as Don King, but as supporting players in Ali's story, this matters less.) As always, Michael Mann's technique and production crew are beyond reproach, but you can't shake the fact that, for all its strengths, Ali is a bit of a lightweight. Once upon a time, back when he just wanted to make us laugh, Jim Carrey would perform a routine where he'd talk out of his ass. And yet I doubt he's ever been more embarrassing than he is in the last 20 minutes of Frank Darabont's The Majestic, a '50s-era, "Capra-esque" drama, if "Capra-esque" means "embarrassingly maudlin, overlong, and full of itself." Carrey plays a soon-to-be-blacklisted screenwriter who, following a car accident, wakes up in a sleepy town with his memory gone; the community's residents, however, are convinced that he's a Favorite Son who presumably perished in World War II. Watching the normally inspired Jim Carrey melt and glow under the townsfolk's hero-worship is grotesque enough, yet the movie could easily be shrugged off as harmless sentimental hokum if it weren't for its finale, when the Feds finally whisk Carrey off to a congressional hearing. Making an impassioned plea for old-fashioned American values like Freedom and Decency, Carrey's eyes shimmer with moral certitude, and damned if he, in full righteous fervor, doesn't exit the courtroom amidst cheers and applause while some of us in the audience stare at the screen dumbfounded, realizing that Darabont and screenwriter Michael Sloane just showed us Jim Carrey triumphing over the Blacklist. In one fell swoop, Darabont and Sloane turn one of the most appalling events of 20th Century America - the national witch hunt for Communists and their personal and professional annihilation - into a pesky side issue that interrupts Jim Carrey's dream of running a movie theatre. The Majestic starts out as dreary, "feel-good" Hollywood drivel and winds up almost staggeringly offensive.