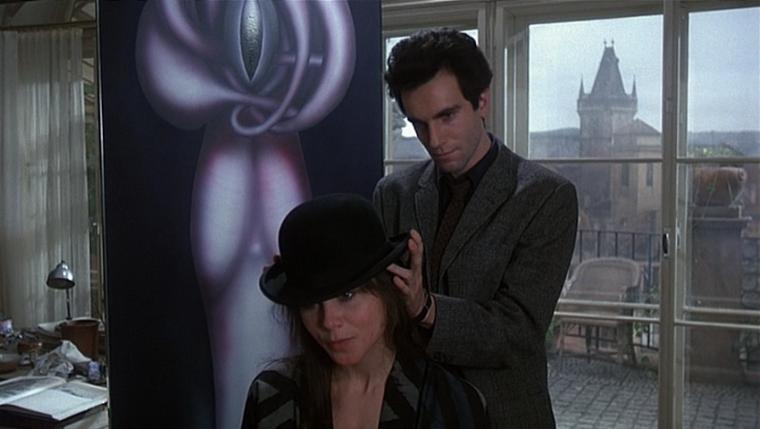 It's been nearly five months since movie theaters closed up shop in the U.S., and still no one can say precisely when non-drive-in venues will open again. (Disney+ recently announced the debut of its planned-for summer blockbuster Mulan on its streaming service – for an additional $29.99 – beginning September 4. That's probably not an outlier, folks; it's more likely a signal.)

But I'm almost more anxious to learn what will happen to movies themselves – specifically contemporary movies – as we get deeper into the COVID-19 era. Will every scene set in public feature background extras, and maybe even the leads themselves, wearing face masks? Will every scene of someone applying for a job feature an exchange in which the applicant is asked, “How did you adapt to working from home?” And perhaps most pointedly: Will screen romance survive? (Imagine one romantic prospect asking another “Have you been tested?” not before they had sex, but before they sat next to each other on adjoining bar stools.)

So let's cherish our romantic cinematic experiences, dammit! The following quintet of 1982 to 1991 releases is composed of four contemporary movies and one period piece – with that “period,” at the time of its filming, all of 19 years old – that personally inspire smiles and tears across the board through memorably satisfying takes on adult romance. One of them, in its first minutes, finds Daniel Day-Lewis whispering to a woman, in unexpectedly romantic fashion, “Take off your clothes” … and he does it while wearing a face mask! Well, okay, not a face mask. He actually says it with a towel wrapped on his face. But still … covered faces on-screen can be sexy, too! So maybe there is hope! 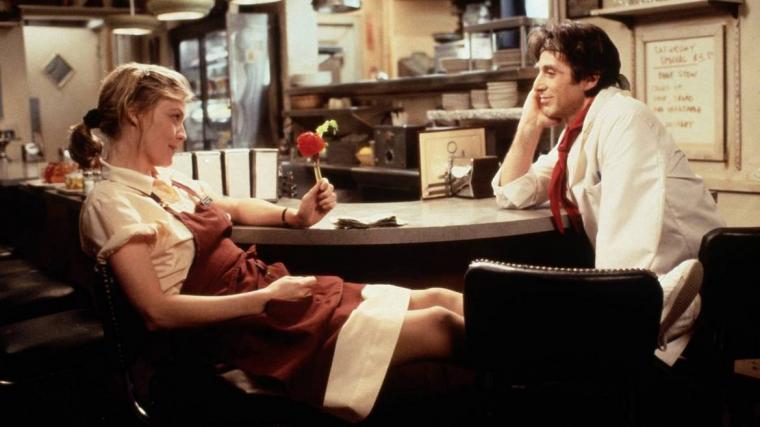 Frankie & Johnny: In his role as a lonely, unremarkable short-order cook and ex-con, Al Pacino was reprising a stage role originated by F. Murray Abraham, which made sense. In her role as a lonely, unremarkable waitress, Michelle Pfeiffer was reprising a stage role originated by Kathy Bates, which … . I'm sorry. That made no sense at all. In truth, the casting seemed kind of insulting to both women, because of course, when adapting playwright Terrence McNally's two-character Frankie & Johnny in the Clair de Lune for film, the Hollywood powers-that-be bypassed the Oscar-winning character actress for the leggy blond starlet. What got missed amidst that outrage was the fact that Pfeiffer is a character actress, too, and an outstanding one – she just happens to look like a southern-Californian Helen of Troy. And she and Pacino are positively magical together in director Garry Marshall's 1991 romantic dramedy, a reunion for the Scarface co-stars that's all about the agonies and ecstasies of two self-described losers who, against all reason, may have finally found their soul mates. Actually, that's not all the movie is about, because as he proved throughout his directing career, there was no script on earth that Marshall couldn't wrangle into a big-screen sitcom, and too much of Frankie & Johnny is devoted to the laugh-track-ready shenanigans of the wacky eccentrics populating the leads' diner. (Marshall being Marshall, the obligatory Héctor Elizondo shows up, this time with a thick Greek accent and his arm in a cast.) But the film's final third is all Pacino and Pfeiffer, and boy do they deliver, his shaggy-dog eagerness slowly but surely chipping away at her tough-gal facade that masks a staggering emotional delicacy. Pfeiffer's breakdown scene reduces me to tears every time. I'm betting Bates wells up, too, though perhaps for different reasons. 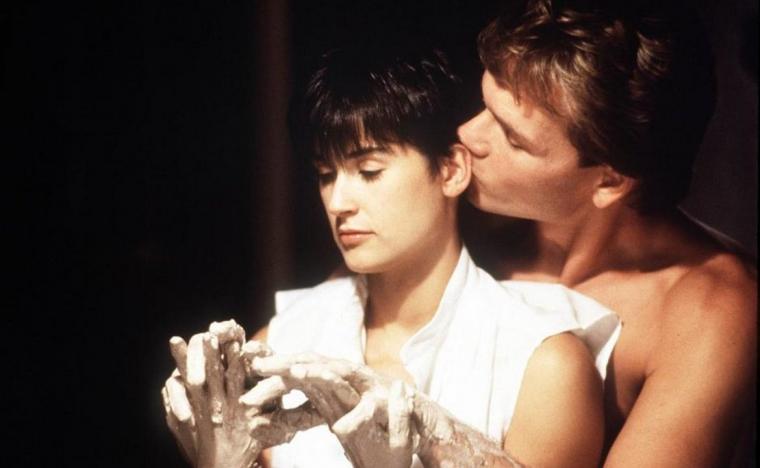 Ghost: Don't start. I know. The pottery. The floating penny. Freaking “Ditto.” It's all so silly and shameless and, you know … Ghost-y. But I was working as a movie-theater usher when director Jerry Zucker's supernatural romance landed in the summer of 1990, and lemme tell you, this thing worked. (It worked for so long that the July release was still playing at our seven-screen cineplex in November.) There was, of course, plenty of audience-grabbing fun in this tale of a love that literally wouldn't die: Whoopi Goldberg's deservedly Oscar-winning turn as a charlatan psychic who proves to actually have The Gift; Tony Goldwyn's thrillingly hateful villainy as a turncoat romantic rival; the eternally welcome weirdness of Vincent Schiavelli as his subway ghost teaches our hero the tricks to being deceased but not necessarily gone. Yet even though they giggled through the early, messy, clay-covered love sequence just as much as we do now, 1990 crowds also swooned when Patrick Swayze and Demi Moore got it on to the soulful slowness of the Righteous Brothers' “Unchained Melody,” and they weren't wrong to. Something just clicked in that blend of great-looking people and great-sounding song (maybe we were all hypnotized by the relentlessly spinning potter's wheel?), and the magic was so potent it carried you through every scene of Swayze's invisible Sam attempting beyond reason to connect with Moore's morbidly depressed Molly. When I returned to the film a couple years ago after a good 15 years away, I was hoping to be entertained, yet didn't anticipate being moved. And then that damned penny landed in Molly's hand, and Moore dropped a perfect tear in synch with the crescendo of Maurice Jarre's score, and I lost it. Am I merely projecting, or are just a few of you, right now, whispering “Ditto”? 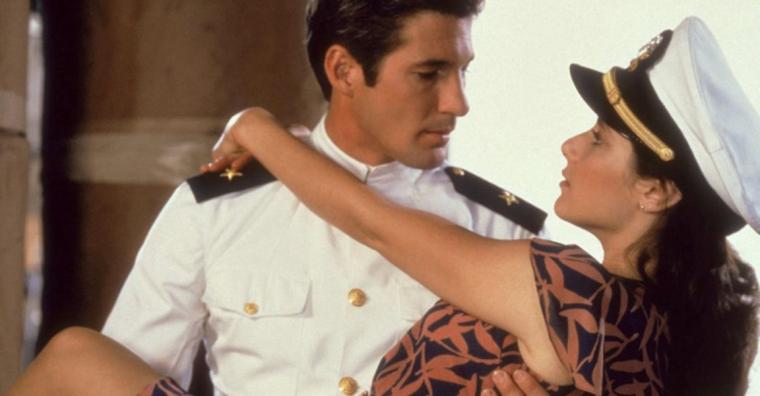 An Officer & a Gentleman: It is so, so annoying whenever you realize your parents are right about things you don't want them to be right about. That's why, for me, the most affecting scene in 1982's smash-hit romantic drama isn't Zack Mayo bawling in the mud, or Seeger's eventual success in climbing the wall, or even the heartbreaking suicide in the shabby motel. It's the factory worker Esther calmly begging her daughter Paula not to chase after the man who loved and left her, because if she does, she's going to do something she'll regret. By this point, thanks to Debra Winger's incandescent portrayal of Paula, we feel we know this young woman as well as her mother does: We've seen her hunger and happiness when connecting with Richard Gere's Navy Aviation Officer candidate Zack; we've sensed the debilitating dissatisfaction of her working-class life with no fulfilling options beyond landing a husband. So when Esther (masterfully played by Grace Zabriskie) attempts to talk sense into her child who wants nothing more than Zack, it's shattering to watch Paula initially argue against Esther's logic and then capitulate, collapsing in her arms while sobbing, “You're right.” It might be the most resonant declaration of romantic love I've ever witnessed in a movie moment that keeps one of the romantic partners off-screen. But director Taylor Hackford's An Officer & a Gentleman is resonant as hell – as well as a hell of a good time – when Gere is on-screen, too, even if he's handily out-acted by Winger and the ferocious, Oscar-winning Louis Gossett Jr. Gere holds his own, though, and it all winds up working beautifully: the flight-training sequences, the flirtations, the humor, the pathos, and, most especially, the finale scored to that irresistible ballad “Up Where We Belong.” Way to go, Paula. Way to go. 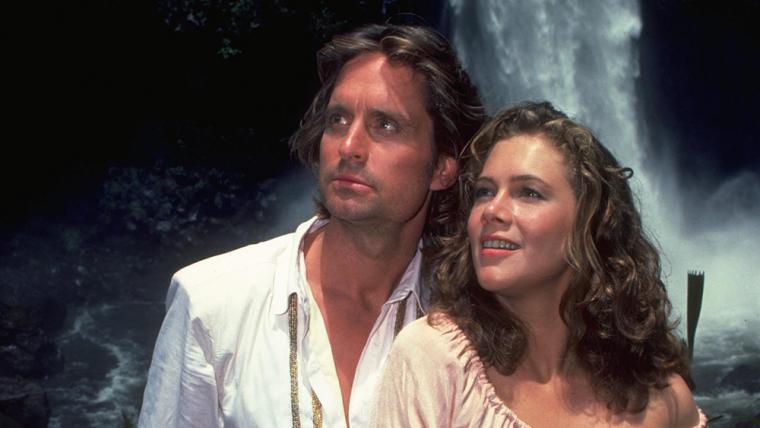 Romancing the Stone: Prior to this 1984 adventure comedy, Kathleen Turner had only appeared twice on-screen: as the femme fatale who makes noir mincemeat of William Hurt in Body Heat, and as the comic villain in the slapstick The Man with Two Brains that Steve Martin removed from his life with a disgusted “Into the mud, scum queen!” Neither role suggested Turner as someone audiences would find empathetic, let alone endearing. But within her first on-screen seconds in director Robert Zemeckis' jungle romance – sobbing with joy at the happy ending her character Joan Wilder has just written for her latest literary heroine – Turner completely wins us over. And for the next 100 minutes, she wins us, and her well-matched co-star Michael Douglas, over and over again. Jeez, this movie is a delight! And jeez, it has an excellent high-concept plot, with Turner's successful author of bodice-ripping romantic paperbacks forced to become the heroine in a real-life bodice-ripper alongside a sweaty hunk just as intelligent as she is, but far less inhibited. As Zemeckis films go, Romancing the Stone is about as low-key as they get, and it still boasts manic chase scenes, perilous cliffhangers, a bad guy getting his arm chomped off by an alligator, and Danny DeVito. Yet whenever the frenzied narrative allows them to, Turner and Douglas share a biting, teasing, winning chemistry of equals that's unmistakable, and Turner is particularly inspired, her initially dowdy bookworm morphing into a sexy Indiana Jones – or at least a Marion Ravenwood – before your very eyes. The less-successful sequel Jewel of the Nile followed a year later, and four years after that, in The War of the Roses, Douglas and Turner were the most unhappily wed spouses ever. You know Hollywood. Star couples never seem to stay content for long. 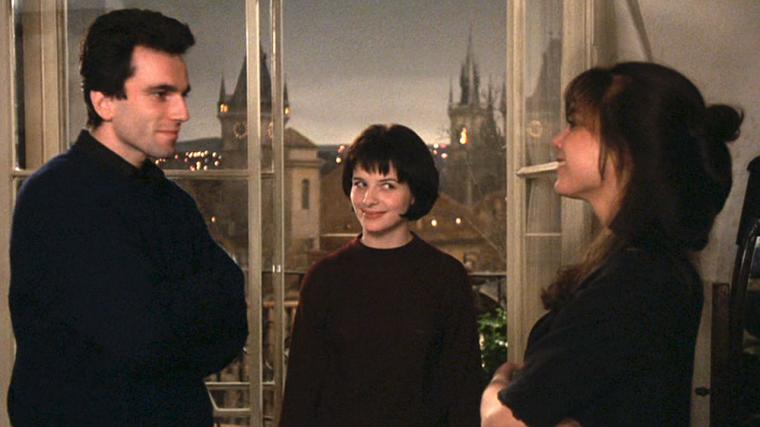 The Unbearable Lightness of Being: We end with a title I've been planning to rave about ever since I started this nostalgia-review series five months (a.k.a. a trillion years) ago. The only question was: Where to include the thing? Five Wildly Erotic Movies That Aren't Porn? Five Sublime Excuses to See Daniel Day-Lewis? Five Movies That Should've Won Best Picture and Best Directing Oscars but Weren't Even Nominated? At last, though, I think I've found the right thematic outlet, because director/co-writer Philip Kaufman's 1988 adaptation of Milan Kundera's classic novel is nothing if not a grown-up love story for Day-Lewis and Juliette Binoche. And Day-Lewis and Lena Olin. And Binoche and Olin. And the film's audiences and the film itself. Set in 1968 Prague before, during, and after the Soviet takeover, Kaufman's sly social commentary and tragic sex comedy finds brain surgeon Tomas, aspiring photographer Tereza, and gifted painter Sabina navigating seismic changes in their environment, each other, and themselves. Running just under three hours, it's also about as transfixing, rapturous, effortless, affecting, funny, gut-clenching, and downright hot as movies get, and photographed by longtime Ingmar Bergman collaborator Sven Nykvist with a transcendent beauty to make your eyes ache. For all of its formal brilliance, though, the film is primarily an emotional gut punch, with Kaufman and his wondrous leads making you feel every subtle shift in perspective and mood. By the final half-hour, you're so deep in the tank for Tomas, Tereza, and Sabina as people that what happens to them, plot-wise, feels nearly irrelevant – although it most assuredly isn't. The last words we hear in The Unbearable Lightness of Being are said with beatific rapture: “I'm thinking how happy I am.” Hearing those words, we're feeling just as happy … even if, knowing what's to come, that line is almost unbearably sad.