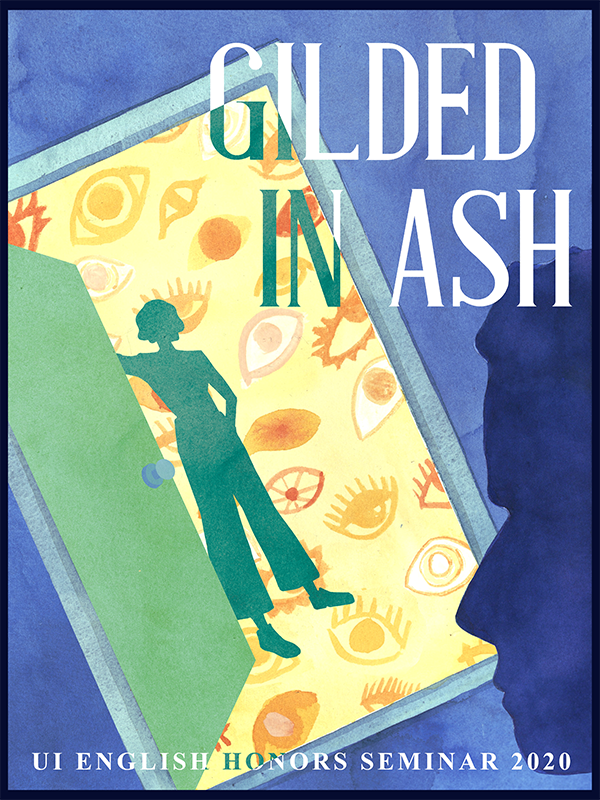 IOWA CITY, IOWA (June 7, 2021) — What began as a collaborative writing experiment has led nineteen University of Iowa students — including KayLee Kuehl of De Witt, Iowa — to sign a film option with Independent Pictures and Fugitive Films for their retelling of F Scott Fitzgerald's The Great Gatsby.

Associate Professor Harry Stecopoulos developed and led what's thought to be a first-of-its-kind class in fall 2020 in which the undergraduate students collectively rewrote the 1925 classic, whose copyright expired at the end of the year.

Producers Mikaela Beardsley (Half the Sky) and Jamie Gordon (Swimfan), along with Executive Producer Cary Woods (Kids, Swingers, Scream), learned of the project through a story on the UI website and contacted Stecopoulos, who sent them the students' book, Gilded in Ash.

"Within just two days, they had carefully read the manuscript and contacted me about next steps," Stecopoulos says, "including in their message thoughtful questions about specific scenes and lines."

One detail in particular initially piqued the producers' interest: That the students made Gatsby an African-American woman who is an art forger.

"This detail intrigued us enormously, as well as the premise of an early-20th-century American classic being reimagined by 21st-century college students," Beardsley says. "Thankfully, the final product more than delivered on its promise. Harry's students have made fabulously interesting choices, and we are thrilled to be working with them on a cinematic adaptation."

The first step required the students to form an LLC. Jack Donley, a student in the class whose parents are lawyers, stepped up to lead the creation of Old Sport LLC, a reference to the nickname Jay Gatsby often uses for Nick Carraway.

"Despite the jokes made in the group-chat several times, I don't actually intend to study law, but I was able to pick up a few things from my parents," says Donley, a fourth-year student from Olathe, Kansas, majoring in English and creative-writing and minoring in history. "The original class was obviously intended to give us experience working and writing in groups, which was a unique opportunity and surprisingly fun. The film option after the class has been an unexpected introduction to the process of adaptations, and I've learned a lot about how books are optioned into film and about the movie industry."

Jane Van Voorhis, assistant vice president at the University of Iowa Center for Advancement, put the group in contact with Iowa Writers' Workshop alumnus Tony Etz, now an agent at Creative Artists Agency in Los Angeles. Etz met several times with the students to explain the process. While he did not represent the students, he did offer advice regarding the contract.

"Tony gave them kind of a primer on intellectual property and film and television," Stecopoulos says. "What began in the fall as an official creative writing class, became in the spring an unofficial course on the filmmaking business."

Katelyn Peters, who will graduate in December 2021 with a double major in English creative-writing and journalism and mass communication, took the lead for the students during negotiations meetings and says Etz was incredibly helpful throughout the process.

"Particularly in terms of the negotiations, he was able to help us identify which areas of the option we might want to adjust or point out different definitions within the agreement that we should get clarification on," says Peters, who is from Waunakee, Wisconsin. "Plus, he has a wealth of industry knowledge that he was able to share with us that definitely helped this whole process feel more grounded and real."

KayLee Kuehl and Haley Triem, both students from the class, additionally have signed on to write the initial screenplay of the class's book.

Olivia Tonelli took on the role of administrator for the LLC, leading communication between the group and producers, scheduling meetings, and facilitating decision-making. The third-year English and creative writing student from Joliet, Illinois, says managing communication between so many parties could be a lot to juggle, but it helped that everyone was completely invested in the project.

"After spending a semester collectively writing a novel, it was great to take on another challenge together," Tonelli says. "Forming an LLC, talking to the producers, and reviewing the option agreement were all uncharted territories for us, so it was great that we had 19 heads to put together to figure everything out."

Peters says she expects having the opportunity to go through this process will be of great help to her in the future.

"As someone who hopes to write and publish novels someday, getting hands-on experience negotiating contracts and seeing the behind-the-scenes of movie production has been invaluable," Peters says. "Leading a negotiations meeting wasn't something I ever saw myself doing, but I actually really enjoyed the process of looking critically at the contract and then speaking up about points where we'd like changes."

While optioning the book does not guarantee that a movie will be made, students are hopeful their novel will read by a larger audience. The original plan was for Iowa's Digital Scholarship and Publishing Studio to publish the students' book, but that has been put to the side due to the optioning process.

"While we put a pause on digitally publishing the book, we have discussed the prospect of traditional publishing," Tonelli says. "Many of us are interested in continuing to edit the novel in hopes that we might begin sending it to publishing agents. So, after we finalize the option agreement with the producers, that might be our next pursuit."

When students signed up for the honors course a year ago, no one expected to be where they are now.

"Even if the film is never produced — and I'm cautiously optimistic that it will be — this is still much bigger than I expected it to get," Donley says. "Professor Stecopoulos joked about the project going up in flames in the very first class. To have the novel actually come together, then to have this interest from producers, is astounding."

"The class itself was such a unique and exciting experience. I mean, it's not every day that 19 people are invited to rewrite The Great Gatsby together, so I could have never imagined that it would've gotten to this point," Tonelli says. "Even when we initially heard that the producers were interested in reading our novel, it was a strangely-exciting, this-doesn't-happen-in-real-life kind of moment, so being at this point in which we're signing the contracts feels quite bizarre to me. The whole experience has felt unreal."

A new take on The Great Gatsby

Learn more about how Associate Professor Harry Stecopoulos' 19 honors course students took on the immense task of rewriting F. Scott Fitzgerald's classic over the course of the 2020 fall semester.

Another semester, another book retelling

Associate Professor Harry Stecopoulos will follow up his 2020 honors course in which students collectively rewrote The Great Gatsby with a similar class in fall 2021. This time, students will reimagine Ernest Hemingway's The Sun Also Rises. The 1926 novel's copyright expires at the end of the year.

About the University of Iowa

As a top global university, Iowa is the ideal destination for learning, discovery, and innovation. We bring art and science together to create a truly unique interdisciplinary education. With over 200 areas of study to choose from, students are encouraged to mix and match majors, minors, and certificates to earn a degree that reflects their unique interests.

From inside our world-class medical center to the most prestigious creative-writing program in the US, students have access to quality academic support and are equipped with the tools they need to stand out in a competitive workforce. Our 15:1 student-to-faculty ratio allows students to work directly with experts in their field while earning valuable, practical skills.

Our campus seamlessly blends into the heart of downtown Iowa City, making it easy to access academic resources and belong to a larger, welcoming community. With over 500 student organizations, clubs, and communities on campus, and countless in-town events scheduled throughout the year, Iowa makes it easy to build a network of friendships and connections that last a lifetime.

To learn more about the University of Iowa, click HERE.