Logan Mougin of Davenport, Iowa, Earns Degree at the University of Iowa 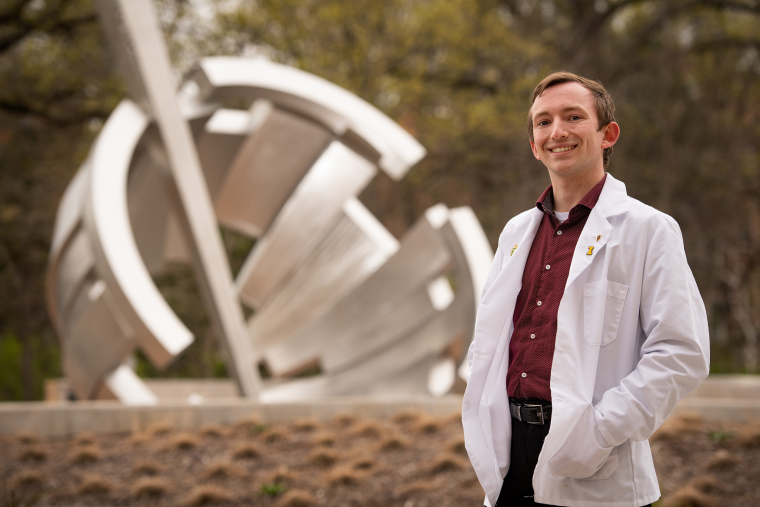 IOWA CITY, IOWA (May 6, 2021) — The University of Iowa is synonymous with health-care. Consider UI Health Care, the state's only comprehensive academic medical center, with an adult tertiary-care hospital and children's hospital and a network of 200-plus outreach clinics and programs. Improving human health is a focus across our eleven colleges and numerous research institutes. Our alumni provide health care services in communities near and far. The graduate featured below exemplifies the compassion and the drive of Iowa students.

It seems preordained that Logan Mougin is earning a Doctor of Pharmacy degree from the University of Iowa.

The Davenport, Iowa native comes from a family entrenched in the health sciences: His mother works in nuclear medicine, his father is a MRI technologist, an uncle an orthopedic surgeon, and an aunt a pharmacist.

"It seems everyone was always on call. They were always doing something important," Mougin says. "That always interested me."

Still, Mougin had to choose which field interested him the most. He took a crucial first step as a high school senior, interning at Main at Locust Pharmacy, a local independent pharmacy in Davenport, Iowa.

"I realized pharmacy was much more than I had thought," he says. "I had always wanted to help people. But seeing pharmacists actually impact people's lives and be important-I appreciated that. They seemed like real people doing real work to help people in a way that a lot of people don't expect. Some people may think that making a difference in health care is being a doctor or being a nurse. This was something different. I thought it was unique, and it was something that I knew I could do."

Mougin enrolled at Iowa — a school he knew well from going to Hawkeye football games — and entered the pre-pharmacy track. Three years later, he applied and was accepted into the College of Pharmacy's doctoral program.

His interest in pharmacy science intensified as he listened to College of Pharmacy Dean Donald Letendre welcome him and his student peers at the college's white coat ceremony.

"Dean Letendre emphasized he wanted people to chart their own path," Mougin recalls. "He really lit a fire under me during that speech that made me want to be more involved, to deepen my understanding of what pharmacy is, and find a specialty in pharmacy that would give me a sense of purpose."

Mougin's sense of purpose crystallized around palliative care. In addition to his Doctor of Pharmacy, he will earn a certificate in palliative care. He got involved in the university's Pain Management, Substance Use Disorders, Palliative Care student organization.

"They talked about subjects that we were not touching upon in our normal curriculum — topics such as substance use, issues beyond medications," Mougin says. "I wanted to be part of an organization that was constantly talking about these issues, and I wanted to hold leadership roles so I could influence that and talk about subjects that I was passionate about."

Mougin began a regular series of chats called "Death Cafes," during which students and faculty would talk about end-of-life issues over coffee and donuts.

"The goal of the Death Cafe is to normalize talking about death," Mougin explains. "In our society, we don't really acknowledge it. You have someone in your family, or maybe a friend, and that person dies, it suddenly happens. Sometimes people don't talk about how they're feeling, and then it gets bottled up and it doesn't end well. This is a way for us to talk about our feelings and get used to talking about death and what it means — especially because we'll be in fields where patients are dying. It's not as if we're not going to experience that."

He also spearheaded a letter-writing campaign to US congressional representatives urging them to expand palliative-care education to professional schools, such as pharmacy, medicine, and nursing.

Kashelle Lockman, clinical assistant professor in the College of Pharmacy and co-director of the Palliative Care certificate program, says there had been talk about having an end-of-life roundtable discussions since she came to Iowa nearly five years ago. Mougin was the one who turned talk into action.

"He has a lot of compassion for human beings, and he wants to see the health-care system improve to better meet their needs," Lockman says. "He thinks about what he can do as an individual to push those changes forward, and how people think about societally important issues like improving quality of life for people with serious illness."

Before he began his pharmacy studies, Mougin took on an internship at a Hy-Vee Pharmacy in Coralville. He worked there for nearly four years, in what he says is one of the chain's most high-volume pharmacies.

Mougin says being involved in administering coronavirus vaccines has been especially satisfying.

"It feels good that we're saving lives," he says. "It's a very physical thing that we're doing. Some of the interventions, you can assume they're helping, but you may not know about it until years later. But you know with the vaccines that this is helping someone right now in the moment."

Mougin hasn't settled definitively on a career plan, but he says it will involve helping people.

"I've always had a passion for community and outpatient pharmacy, and I will pursue opportunities in those fields post graduation."

Collaborate with expert health-care providers at UI Hospitals and Clinics and five health-care colleges — all in our backyard. Start your career in a space designed with the student in mind. Students work one-on-one with world-renowned faculty at one of the nation's top public research universities.

About the University of Iowa

As a top global university, Iowa is the ideal destination for learning, discovery, and innovation. We bring art and science together to create a truly unique interdisciplinary education. With over 200 areas of study to choose from, students are encouraged to mix and match majors, minors, and certificates to earn a degree that reflects their unique interests.

From inside our world-class medical center to the most prestigious creative writing program in the US, students have access to quality academic support and are equipped with the tools they need to stand out in a competitive workforce. Our 15:1 student-to-faculty ratio allows students to work directly with experts in their field while earning valuable, practical skills.

Our campus seamlessly blends into the heart of downtown Iowa City, making it easy to access academic resources and belong to a larger, welcoming community. With over 500 student organizations, clubs, and communities on campus, and countless in-town events scheduled throughout the year, Iowa makes it easy to build a network of friendships and connections that last a lifetime.

To learn more about the University of Iowa, click HERE.