Ballet Quad Cities' “Our Will to Live,” October 8 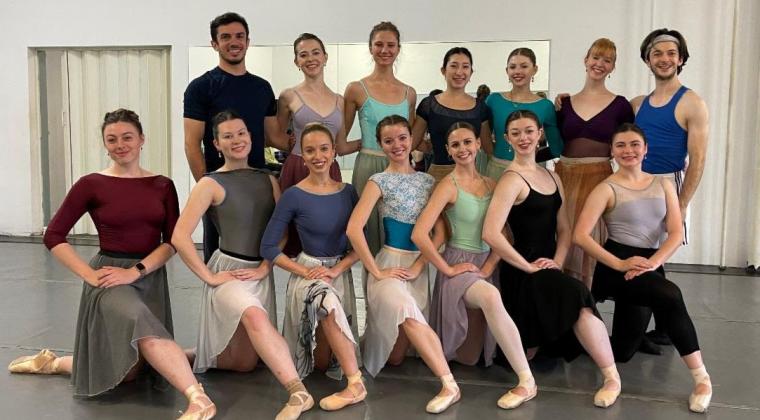 Ballet Quad Cities' "Our Will to Live" at the Adler Theatre -- October 8.

With their latest production staged in conjunction with the Quad Cities' area-wide Holocaust-remembrance project “Out of Darkness” (OutOfDarknessQC.com.), the professional dancers of Ballet Quad Cities present a remembrance of their own in Our Will to Live, an original program of dance vignettes boasting music by composers affected by the Holocaust. Taking place at Davenport's Adler Theatre on October 8, the repertoire for this two-act ballet runs the emotional gamut from exhilarating to painful – though the company's artistic director and co-choreographer Courtney Lyon realizes that potential patrons might incorrectly expect a night solely devoted to the latter.

“We understand it's a hard sell,” says Lyon of the performance's subject matter. “The dancers, though, have been really committed and respectful and thorough in their approach, and I was very mindful, when I was creating the program order, of the pieces and the flow of the music and the flow of the visuals. There are some intense moments that will cause an audience member to reflect and really feel. But there are other moments when they'll be able to feel hope or joy, and hopefully they'll leave feeling like they're really experienced life through art.”

As Lyon says, Ballet Quad Cities' Joedy Cook was on the initial organizing committee for the “Out of the Darkness” project, and an accompanying performance by the dance company has been in the works for roughly a year.

“Joedy's first thought,” says Lyon, “was that we had an Anne Frank ballet that was choreographed in 2004 that we could bring back. But a gentleman named Joe Chonto, who has an amazing knowledge of music, had just returned to the community; he's from the area, but had been to New York and beyond. He started seeing the ballet's shows and was really impressed by what we did, and he said to us, 'You know, I've got this idea that you might think is nuts. But what if you did a program on composers who lost their lives in the Holocaust, or were somehow affected by the Holocaust, or who had their music kind of shut down by the Holocaust? It's music that people don't know that well, and I don't think anyone has ever done this before.'"

[Read Joe Chonto's essay about this performance at Ballet Quad Cities Resurrects Music of the Holocaust.]

“Joe has a lot of knowledge in this area,” Lyon continues. “It's a life's passion for him. He has tons of resources: books and movies and art and all kinds of stuff. So we talked about it in the office for about a minute and thought, 'That sounds amazing.' Because so much of the music hasn't really been available or played much, or heard much, and it's just gorgeous.”

As is stated in the Our Will to Live program notes: “The significance – and unfortunately, relevance – of this program is deep. Most of these composers and their works have been forgotten except by a small group of knowledgeable people. This 'forgottenness' sadly has enabled the Nazis’ anti-Semitic agenda to continue: to have not only these composers’ physical lives, but also their cultural legacies, their stories, their meanings, be erased from history. In effect, dealing them a kind of double-death. And robbing the world of their immense, first-rank musical contributions. This program is a step toward a reset, resurrecting the music and vivifying it via dance.”

With Chonto consequently serving as a consultant and adviser on Our Will to Live, he was also able to provide Ballet Quad Cities with numerous research materials on the Holocaust, though the company members also did much of their preparatory work on their own.

”Our dancers were motivated from the start to educate themselves,” Lyon says. “I know one dancer read The Diary of Anne Frank because she never had that opportunity in school l. A lot of us were raised with that milestone in our education, and she didn't have that one – and that book, of course, becomes a gateway to others. And before Emily Kate [Long] and I started choreographing, we shared with the dancers all of the music and all of the inspiration in writing, so they could spend time on their own, between rehearsals, preparing themselves for what they were going to walk into in the rehearsal room. Because it's pretty intense stuff with really intense back stories.

“So the process was really about getting the dancers ready to be able to be choreographed on in a unique way. But also, I think everyone has seen it as an opportunity to grow as humans. And the dancers understand their responsibility, and the impact that they are potentially going to be having on the audience and future dance generations.” 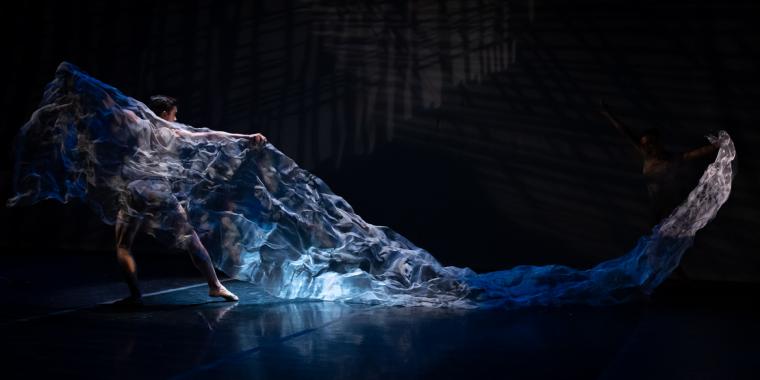 While great consideration has gone into not making the Our Will to Live program relentlessly downbeat despite the subject matter, Lyon admits that working on several of the program's vignettes was, to say the least, emotionally challenging.

“Some were absolutely more demanding than others,” she says. “In the [Ilse] Weber piece Wieglala, for instance, knowing that she sang her songs for people who were actually walking into the gas chambers while she was singing. It's like 'Oh my God,' you know? It was so intense to create that piece. That's not necessarily what the piece is about – we're certainly not mimicking people going to the gas chamber. The piece is actually this gorgeous representation of the strength of people to support each other. A community feeling. But of course, the experience behind the piece is weighing on my mind as I'm creating that piece of choreography.”

Yet for all of the inherent darkness of the subject matter, Our Will to Live audiences will also be treated to perhaps unexpected moments of levity.

“One of the pieces I chose,” says Lyon, “is a polka by Rudolf Karel, and he wrote it when he was in the camps. He never stopped composing, he was really prolific, and he kept composing in the camp. He would write these compositions down on anything he could find – basically tissue paper or toilet paper – and would sneak them out. And his students on the outside were able to preserve and convert them. He didn't survive the camps, but his music did, and this polka is fantastic. It's lively. It's fun.

“The Holocaust was such a dark time in history, and it's such an important part in history, and there can be such a heaviness automatically associated with the topic. However, I think what we've done is really celebrate the lives and works of the composers. So Our Will to Live isn't necessarily always dark. These composers are people who had a sense of humor and hope and joy. And hopefully our audiences will walk away being inspired by humanity.”

Our Will to Live repertoire and additional program notes

Out of Darkness
Music: Giuseppe Verdi, Requiem, VIId, Libera me. Choreography: Courtney Lyon. Dancers: full company. "This opening piece of Our Will to Live will set the mood of reverence and respect for all human life."

Infinity
Music: Gideon Klein, Fantasy & Fugue. Choreography: Emily Kate Long Dancer: Jillian Van Cura. "Infinity is inspired by a work of art by Orion Middle School sixth0grader Eve Wilbur titled Infinite Tears. In Eve’s words, 'In my artwork, you will see crystal tears hung in the infinity symbol, which reflects the idea that all the tears that have been shed have infinite value. When we choose to reflect and remember our past, including the pain and sorrow, only then will we see meaningful change.'"

Kaddish
Music: Sándor Kuti, Sonata for solo violin. Choreography: Courtney Lyon. Dancers: Madeleine Rhode and Christian Knopp. “Kaddish is the mourner’s prayer of the Jews, requesting eternal bliss for the deceased and peace for all who mourn. Mauricio Lasansky’s series of eight prints, Kaddish, appeared 10 years after Nazi Drawings, his statement of Nazi destruction and degradation. This duet, based on Lasansky’s eight prints, captures the grief, hope and peace embedded in the experiences of the victims and survivors."

Wiegala
Music: Ilse Weber, Wiegala. Choreography: Courtney Lyon. Dancers: Eleanor Ambler, Claire Cordono, Sierra DeYoung, Madeline Kreszenz, Madeleine Rhode, and Jillian Van Cura. "Ilse Weber was a Czech author and songwriter who wrote children’s fiction and poems. She would play guitar and sing her lullabies to the children and elderly in the ghetto of Theresienstadt. At Auschwitz, it is said that she sang to her son and to other children as she accompanied them voluntarily into the gas chambers. Wiegala is one of Ilse’s lullabies."

Letters
Music: Jan Rychlík, Zuzana Ružičová, Hommagi Gravicembalistici. Choreography: Emily Kate Long. Dancer: Mahalia Zellmer. "As a teenager, Czech harpsichordist Zuzana Ružičová was imprisoned in Terezin and Auschwitz. By lying about her age (saying she was 16 instead of 13) her life was spared. Her time in the camps left her physically and psychologically impaired, and she had to retrain her musical skills almost entirely."

A Survivor from Warsaw
Music: Arnold Schoenberg, A Survivor from Warsaw. Choreography: Courtney Lyon. Dancers: Nicholas Barolotti, with Ruby Anderson, Claire Cordano, Sierra DeYoung, Madeline McGlaughlin, and Eleanor Ambler. "A Survivor from Warsaw (composed in 1947, two years after the downfall of the Nazi regime) is a spoken, sung, and orchestrated memorial to the victims of the Holocaust told in first person."

Our Will to Live
Music: Music: Giuseppe Verdi, Requiem, VIIc, Libera me. Choreography: Courtney Lyon and Emily Kate Long. "This grand finale for Our Will to Live will feature the entire company and honor the meaning of these great composers’ and artists’ lives."