Aaron Go Bragh: “Aaron Power! The Musical” at the Center for Living Arts East, March 17 through 20 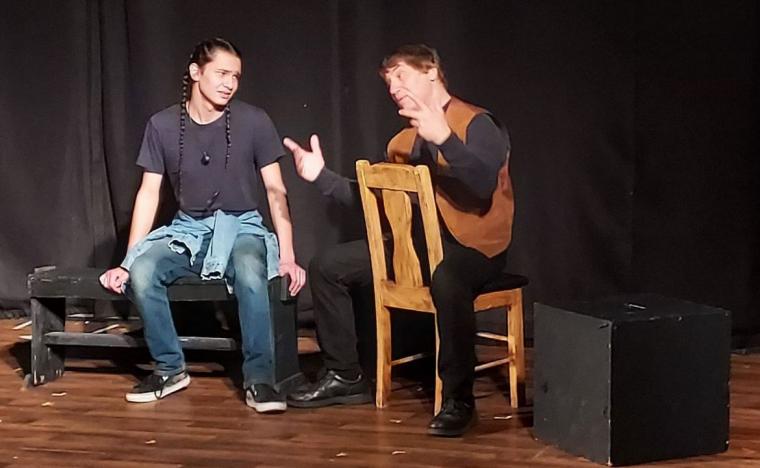 Ira Francisco and Robert Gregory in Aaron Power! The Musical

Many have said it, and I'll say it again: We are so fortunate to have multiple theatres in the Quad Cities offering a wide variety of shows by the amazing performers, staffs, and crews who give them life. We also have the pleasure of seeing original works by local playwrights. In just the past few years, these have included The Whistleblower's Dilemma by Jim Sederquist; (a work in progress) and Their Town by Alexander Richardson; "Jacques"alope by TJ Green and Calvin Vo; and multiple playwrights' festivals and nights of one-acts. We also had We Wrote This in a Day (Don't Yell at Us) by Vo, Green, and Mel Maylum, and many made-up-on-the-spot long-form works by G.I.T. Improv.

Now we have the premiere of Aaron Power! The Musical. It was created by two of the hardest-working theatre polymaths around: Michael Callahan and Dan Haughey, the latter of whom also directed. I attended the Tuesday dress rehearsal at the Center for Living East. And what a treat it was to enjoy this fresh story, with rousing music, performed by some of the most passionate, committed actors I've recently seen – and to know that it was powered by local minds and hearts. So much work went into this treasure.

The Black Box Theatre hosted Aaron Power! as a staged reading/recital in 2019, but it's now a mature production, and has changed drastically since then, with the actors allowed to throw in their own ideas. Chicagoan Ira Francisco, a biracial Navajo who plays the central character, was an especially valuable contributor, as Aaron's mixed Navajo and Irish heritage drives the plot. Regina Tsosie, president of the Native American Coalition of the Quad-Cities, was another cultural consultant. Playwright, director, actor, singer, and musician Callahan is a veteran of many diverse productions. Haughey, of Irish ancestry, includes Gaelic songs in his solo repertoire, and taught theatre to Navajo students. Consequently, their achievement has a fine pedigree. 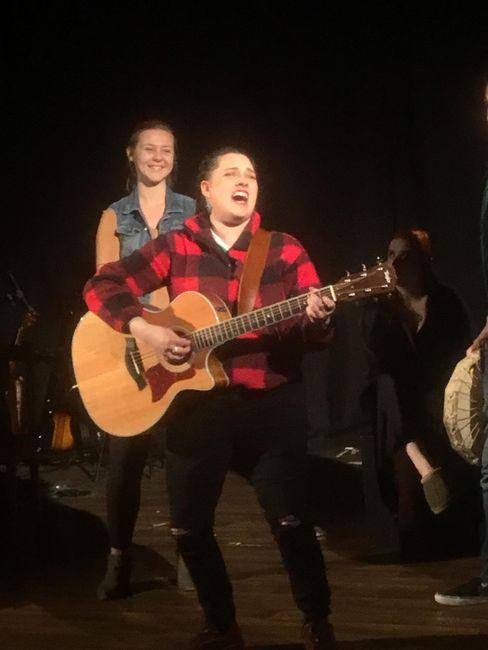 As the show begins, the troubled Aaron has been accused of murder. He travels to Ireland, seeking his unknown grandfather. There, he meets a band and joins in the jam with his drum. He decides to tour with them while they help him with his quest, but the dress rehearsal's early scenes seemed to have a bit of a flow issue. Maybe the actors were warming up, or had the jitters – or maybe it was because Aaron and his mother (played by Jennifer Cook Gregory) had such discordant emotions.

Francisco, though, is energetic and fearless in his portrayal, singing Aaron's confusion and despair. He never faltered in anything he did onstage, which is remarkable for a first-time performer. Gregory played her character's agony convincingly, displaying grief over her husband's recent accidental death and distress over Aaron's alleged crime (of which she seems to believe he's guilty). But in Ireland, the band's liveliness relieves this early tension. This group is portrayed by Sarah Goodall, Robert Gregory, Rebekah Stone, Emmalynn Tully, and Jake Wirz, and they come off as longtime, true-to-life mates – sharing music and camaraderie (and, as in all bands, clashes) as their conversations charmingly overlap.

They wowed me with their singing and playing, too. Robert Gregory plays electric bass and violin; Stone strums a guitar; Tully has her hands full with mandolin, guitar, autoharp, and recorder; Wirz, most of the time, takes charge of the cajón (an interesting Peruvian instrument that looks like a stool but is actually a drum); Francisco beats a portable powwow drum; Gregory sneaks in with a flute; and all of them sing. Conductor, accompanist, and music director Karl Bodenbender plays keyboard to complete the sound, and Callahan has given them outstanding material to sing and play, including my favorite, "Blackthorn Tree." (There's also an exhilarating traditional Irish tune I'm pretty sure you'll recognize.) 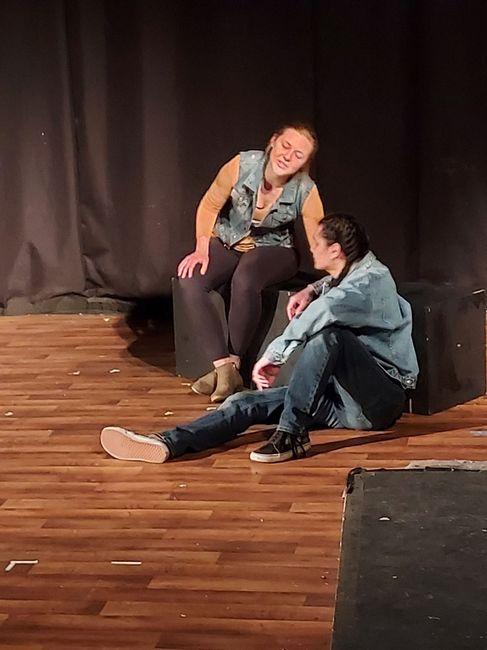 These actors impressed me with light but realistic and consistent brogues. Goodall plays the fun and boisterous Moya. Robert Gregory is an appealing, good-natured Daniel. Stone portrays Kate as sweet, a little shy, but outspoken. (Well, they're all outspoken.) The multi-talented Tully, who has often sung opera, is here the cheery lass Nessie. Wirz, whose Seamus is sometimes morose compared to the others, is nevertheless compelling. And the non-singing actors include Ted Brown, who plays two very different patriarchs skillfully, and Austin Griffin as a grim officer of the national police.

On Tuesday, I learned that one scenery effect apparently didn't work at all – though I never knew it was missing. However, I did feel that one particularly “shocking” sound effect should have been much louder, as it propels the characters into a new direction. But taken overall, Aaron Power! The Musical boasts a script that is an engaging action story, romance, and concert combined, with relatable characters addressing family, culture, violence, and journeys. Faith is mentioned throughout, including the faith of Catholics and Protestants (in reference to Ireland's Troubles), as are Native spirituality and Celtic deities. It's mostly a drama, albeit with some laughs, and the joyousness of the convivial band is contagious. See this show for its ingenuity and substance, and to celebrate St. Patrick's Day – and Navajo Sovereignty Day next month.

Aaron Power! The Musical runs at the Center for Living Arts East (2008 Fourth Avenue, Rock Island IL) through March 20, and more information and tickets are available by e-mailing aaronpowertix@gmail.com and visiting DanAct3.com.