ABBAcadabra! : “Mamma Mia!”, at the Circa '21 Dinner Playhouse through September 15 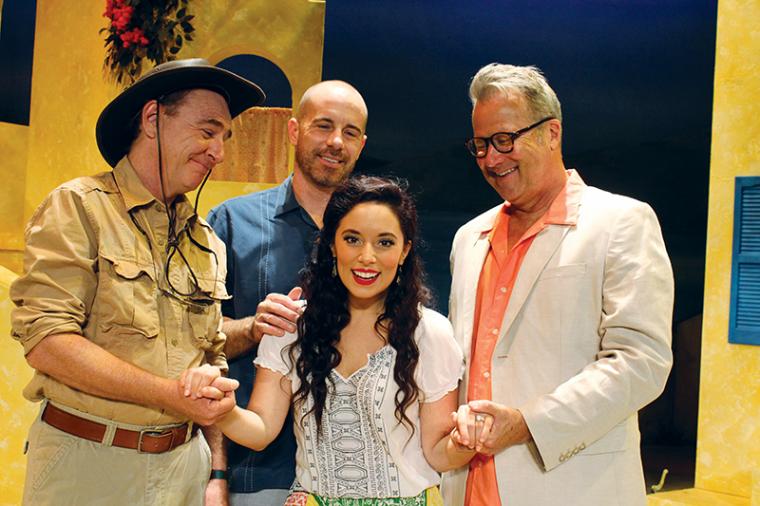 I grew up listening to ABBA's Gold: Greatest Hits (thanks, Mom!), so I felt right at home at Friday’s opening-night performance of Mamma Mia! at the Circa '21 Dinner Playhouse. But loving the iconic ABBA is not a prerequisite to enjoying director/choreographer Michael Matthew Ferrell’s fun-filled production.

It’s really a simple story: Raised without a dad, 20-year-old Sophie (Courtney Groves) is about to be married, but wants her father to be there. After reading her mother’s diary, however, Sophie discovers that any one of three men could possibly be that guy, so she invites them all to her Greek-island wedding. Much to the chagrin of her mother, taverna owner Donna (Jennifer Poarch), all three men show up, and hijinks ensue. With its music and lyrics by Benny Anderson and Björn Ulvaeus, additional songs composed with Stig Anderson, and a book by Catherine Johnson, Mamma Mia!'s action takes place interspersed with songs made popular by the 1970s Swedish pop group ABBA.

Almost right away, Circa '21's high-energy production kicks off with “Honey Honey” featuring giggly Sophie and her best gal pals Ali (Brooke Myers) and Lisa (Krysti Wiita) as they read through Donna's diary. Groves brought an effervescent quality to the role of Sophie, with a strong, clear voice that matched her uncanny ability to draw your eye. As the highly emotional and sometimes frantic Donna, Poarch managed to be feisty yet still likable, and with her singing voice that was occasionally too pretty for pop, the performer excelled at Donna’s second-act ballads. But when Donna and Sophie sang together in “Slipping Through My Fingers” while Sophie put on her wedding dress, Poarch and Groves perfectly hit a sweet spot of sincerity that was surprisingly touching. 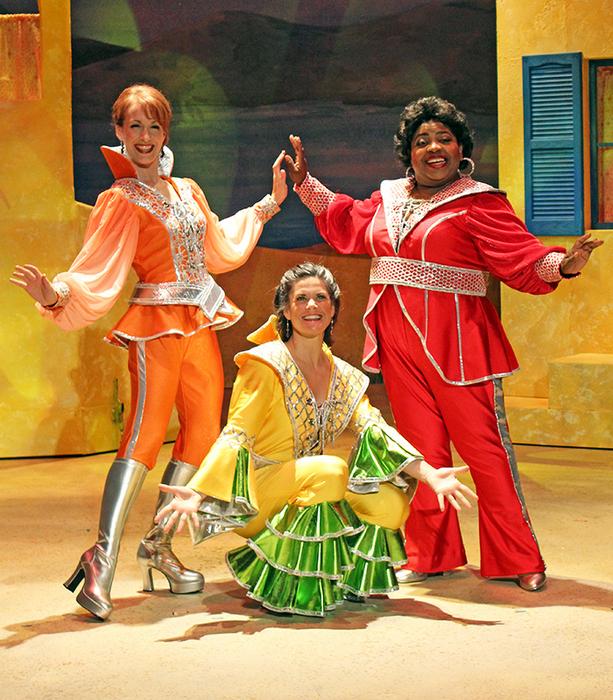 Donna’s best friends Rosie (Illy Kirven) and Tanya (Erin Churchill) bustle in to lend support, and find their pal shocked at the unexpected appearances of her long-lost flings. Attempting to cheer Donna up, Rosie and Tanya begin to perform, the result of which is a “Dancing Queen” that is an excellent tribute to this perennial school-dance favorite. Full of physical comedy and plenty of sexual innuendos, the genius employment of props and costumes made the song pure fun; I truly believed they were having the time of their lives. Kirven was exceptionally captivating and quickly became a house favorite; if she was on-stage, there was a palpable energy, as everyone on Friday eagerly anticipated what she was going to do next. Not to be outdone, Churchill’s Tanya was hilarious as she evaded the advances of Pepper (Jarrett Bennett), and as far as sidekicks go, Kirven and Churchill are the cream of the crop.

The three paternity suspects – Sam (Kenton Fridley), Bill (Tom Walljasper), and Harry (Jeff March) – were also great, all having endearing moments with both Donna and Sophie. It’s easy to see why Donna would have fallen for each man, but it’s Sam we get to know the most. When Fridley and Poach sang “SOS” together, it was a refreshing moment in an otherwise slow second half – but it also served as a reminder of the love their characters once shared and, it turns out, never quite got over.

Ferrell’s choreography was stunning throughout – upbeat, and slightly suggestive, without being lewd – and he habitually made the group numbers a swirling spectacle of fun. In “Lay All Your Love on Me” broad-shouldered bridegroom Sky (Andrew Wright) was dragged off to his stag night by the male ensemble, clad in blue and purple wetsuits and swim flippers that created a percussive excitement as they danced. Jeff Brown’s lighting design also made the number particularly memorable. Rarely do I find myself dazzled by a production’s lighting effects, but Brown captured the spirit of the '70s without ever once turning the stage into a discotheque. 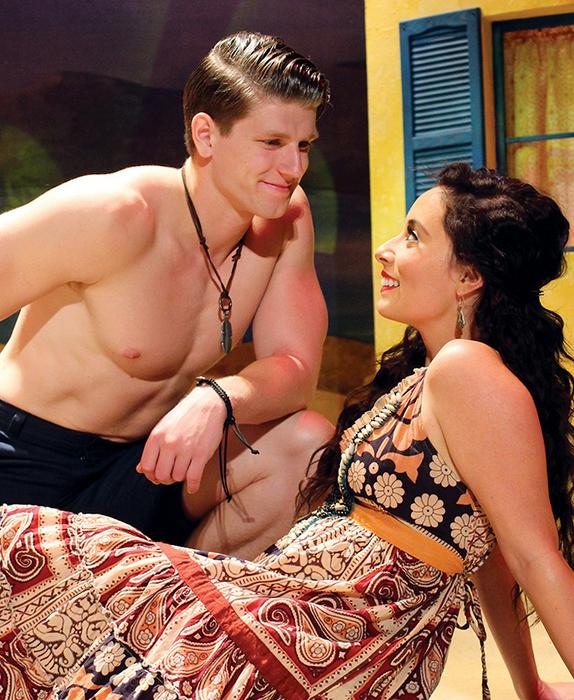 Kathy Voeck’s set, meanwhile, positively pops, with its appealing bright yellows, cerulean blues, and surrounding cliffs all adding to the ambiance of Greece. Featuring two large set pieces that could be rotated into an interior room, no cast member was too self-important to not at one point move a set piece, and they all did it with a little pep in their step, keeping the shifts fun.

Meanwhile, Gregory Hiatt created beautiful costumes that perfectly blended with the on-stage warmth and brightness, including the requisite bell-bottomed jumpsuits that one would expect from an ABBA musical. The showcase, in my opinion, of Hiatt's designs was the wedding attire. Nuptial-ceremony guests sported a stunning sunset of oranges, reds, and yellows in contrast to the bride and groom in white, creating a stage picture that was visually captivating.

From the booty-shaking Bootleggers' pre-show performance to the white-and-silver dance-party finale, everyone at Circa '21 should be proud for bringing a familiar, yet original, production to life. Unabashedly fun without trying too hard, this production is pure escapism at its very finest. Mamma Mia – I would go again!

Mamma Mia! runs at the Circa '21 Dinner Playhouse (1828 Third Avenue, Rock Island) through September 15, and more information and tickets are available by visiting Circa21.com.