All Ways a Bridesmaid: “Five Women Wearing the Same Dress,” at the Playcrafers Barn Theatre through June 16 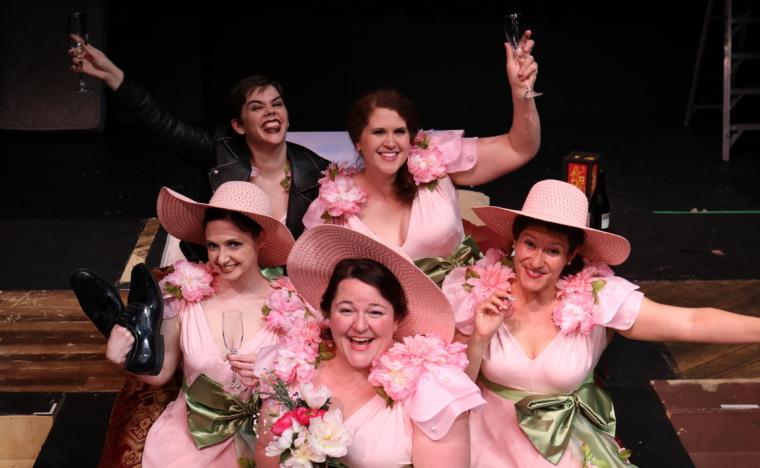 I knew nothing about Five Women Wearing the Same Dress when I walked into the Playcrafters Barn Theatre on Tuesday evening. But it makes the experience even more satisfying when a show goes beyond my expectations. This one did.

The play, by Alan Ball, debuted in 1993, and given its title, I was a bit dismayed that it was written by a man. His name looked familiar, though – and indeed, I'd seen it in many credits. He went on to write for TV's Grace Under Fire and Cybill, win an Oscar for the American Beauty screenplay, and create Six Feet Under and True Blood, all of which are overflowing with great woman characters. Don't know how he got his XX writing chops, but he got 'em.

As Smysor announced before Tuesday's preview performance, the actors were ready, and all were opening-night-level solid. The realistic acting impressing me immensely, with every word and movement feeling organic and spontaneous. I know from experience that this is difficult – especially when sustaining it for two hours – and the cast clearly worked hard on this show (which contains strong language and sexual references, and is definitely not for kids). 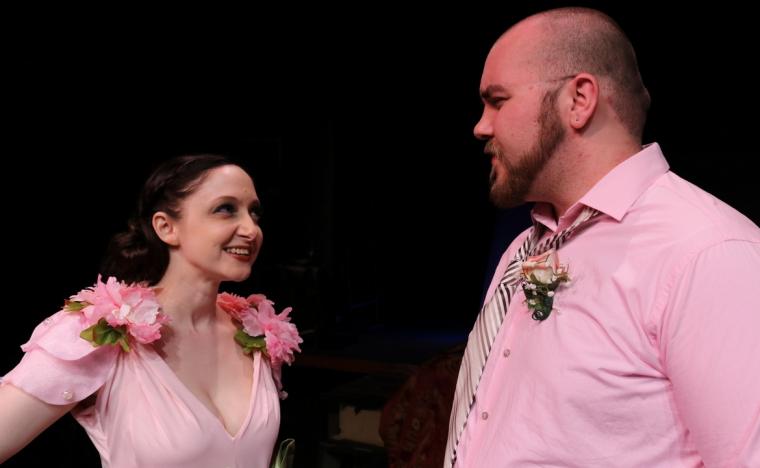 Five Women is set in Tennessee, and I commend Smysor and her performers for choosing not to employ heavy Southern accents. (Audiences can be distracted by them, and they can put up a wall between characters and audiences.) Ball's same-dress-wearing women, as you might guess, are bridesmaids, and all are seeking refuge from the reception, for various reasons, in the room of the bride's sister.

Emmalee Hilburn, as Frances, makes a very strong entrance. Initially, I thought her enthusiasm was overplayed, but I came to realize that this is just how Frances is when she's excited – and she's the only one who's happy to be there. She throws herself into revelry (within limits), and when her convictions are challenged, she hurls herself into battle. When she crumbles into doubt and blooms with hope, it's all genuine. There's a lot of emotion to play here, and Hilburn does so beautifully.

Meredith (Mattie Gelaude) is disgusted at being forced to participate in the outlandish wedding. It's a nightmare for the little sister who's had to put up with Bridezilla her whole life, and Gelaude plays her anger and vulnerability nimbly and affectively, whether sullen and disaffected, with cutting remarks, or by shouting on the phone. Gelaude is an expert chameleon, and she truly becomes Meredith, a role unlike any other I've seen her play.

Stephanie Moeller is Trisha, who is impatient with the event for other reasons. Moeller has developed her craft tremendously well over the past few years. As Trisha, she personifies confidence, frankness, and ease at living on her own terms. However, Moeller doesn't play her too jaded. It's clear that Trisha's caring for certain people goes as deep as her contempt for others.

Georgeanne (Elle Winchester) also has reasons to hate this affair, including unfulfilled dreams made more painful by being there. She calls herself "pathetic" and can certainly be morose, yet is an often cheerful survivor who feels her burdens but hasn't been stopped by them. Winchester is better in this show than in any I've ever seen her in, and she was good to start with. 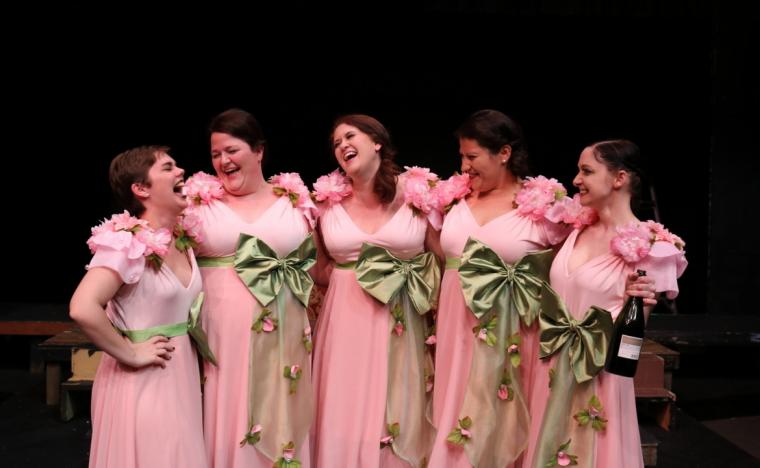 I was pleased to see Jazmin Mendez-Barradas onstage again. She gave one of the standout performances in Playcrafters' A Wrinkle in Time last year, and plays Mindy as ably and interestingly as she did the completely different character Mrs. Who. As the only bridesmaid from the groom's side, she's the lone stranger in the group. However, Mendez-Barradas' Mindy walks in as comfortably as if she lived there, and joins the conversations – and arguments – with ease.

Payton Brasher, in his brief appearance as Tripp, presents a wonderful mix of bashful, brash, nervous, earnest, and smitten, with a bit of jerk thrown in, as he tests the romantic waters with a new acquaintance. Brasher has been doing a lot of Shakespeare (inarguably wonderful theatre), but I hope to see more of him on the contemporary stage, as well.

Only two small details from Playcrafters' Five Women Wearing the Same Dress preview were a bit off. The wedding guests' cheering and applause ostensibly came from the yard as the women looked down through the upstage-center window. However, the noise actually came from downstage left. Also, the bride's bouquet was much too small and tasteful considering the attendants' derision of her ostentatious gown. I was expecting a clump of blooms and ribbons bigger than anyone's head.

Ugly bridesmaid dresses, meanwhile, have been a comedy staple for decades. Nonetheless, I'm glad that these weren't way-over-the-top hideous. I'll admit it – I kind of liked them.

Five Women Wearing the Same Dress runs at the Playcrafters Barn Theatre through June 16, and more information and tickets are available by calling (309)762-0330 or visiting Playcrafters.com.