All Weill, and Good: “The Threepenny Opera,” at Augustana College through May 8 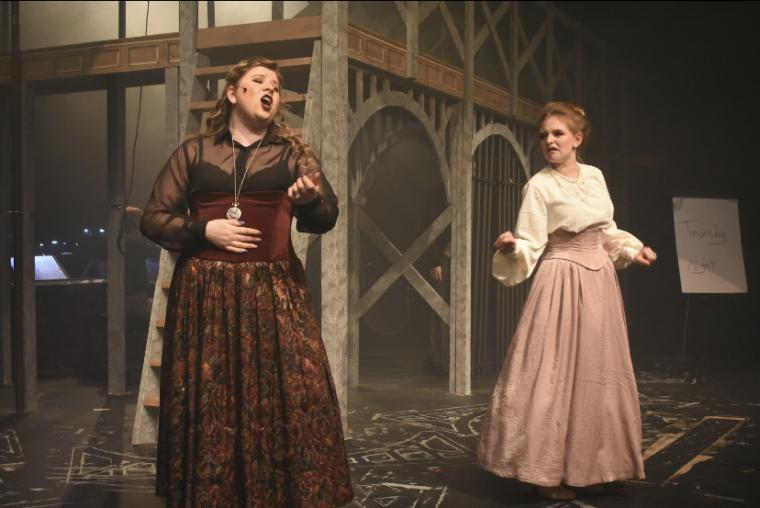 Maria Coulter and Amy Nicholson in The Threepenny Opera (photo by Chris Ferman).

Shelley Cooper, director of Augustana College's current stage production, invited me to Tuesday's dress rehearsal of The Threepenny Opera at the college's Brunner Theatre Center. Playwright Bertolt Brecht and composer Kurt Weill created this classic based on John Gay's The Beggar's Opera, and after premiering in 1929, it's been adapted in films and performed live myriad times worldwide. Locally, St. Ambrose University has presented it at least four times over the past 50 years, most recently in 2006. (I saw one of the earlier productions, but can't remember what year – the 20th century is a blur to me now.)

Cooper, vocal-music director Maureen Holmes, and instrumental-music director Michelle Crouch led the performers, crew, and staff in Augustana's endeavor. I was confident that the theatre and music departments here could pull the show off beautifully, even though the libretto is not among my favorites. They did, with energy, enthusiasm, and so much talent. The expressive actors here are skilled beyond their years.

This Threepenny features a relatively small cast and crew, presenting three acts of demanding material set in 1837 London. In this snarky social commentary, we have thieves, whores, a couple of dueling wives, and a corrupt politician. Plus, of course, the show's central man: the throat-slitter Macheath. He's played by Benedict Wood, who nonchalantly and confidently projects power. Wood just is The Man.

Amy Nicholson, who portrays Polly, is sprightly and compelling by turns. In a cast filled with emotive performers, she stands out with her innocent face and high-caliber voice, particularly during the chilling "Pirate Jenny." Maria Coulter, employing a stunning operatic voice as Lucy, just kills it in a couple of the show's most powerful numbers, including "Lucy's Aria." We get to enjoy these dynamos together in "The Jealousy Duet." 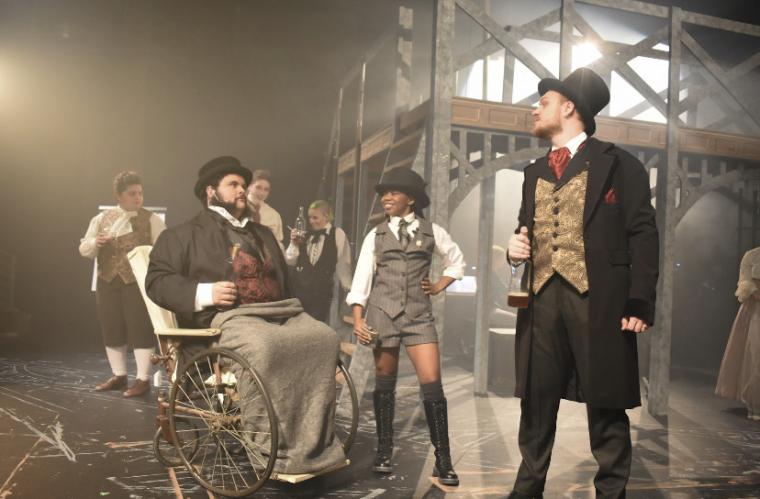 In her role as Jenny, Jacqueline Issacson is striking and quietly commanding even though her character's social status is low, and she's queen of Threepenny's band of opportunists. And Alyssa Frazier plays Mrs. Peachum, and delivers one of my favorite portrayals here, exuding a wry manner and treating us to yet another lovely voice.

As the Street Singer, Anya Giordano performs that song you've probably heard sung by Bobby Darin or Louie Armstrong: "The Ballad of Mack the Knife." She has a fine voice and is alluring in anachronistic garb – a sort of fetishistic 1930s space-age maid uniform, and the skimpiest outfit of the bunch. The tacky outfit Ezekiel Aurelius wears as Mr. Peachum matches his character; aficionado of the swagger and sneer, he's something of a third-rate Fagin to his band of thieves. Makupa Lungu's Narrator, meanwhile, is nattily attired in a modified 20th-century-style suit – she is a lively, refreshing sorbet compared to the sometimes heavy fare of the bulk of the show.

These characters are jaded – even AJ Perez's affable Sheriff Tiger Brown, in his actions, fulfills his obligation to live down to everyone's expectations. Contempt is the overriding atmosphere, and there's a whole lotta sneering goin' on, with occasional smirking for variety. Humorously, however, they also have an actual sharing-and-learning moment worthy of the 1980s TV show Family Ties.

While the performers playing Threepenny's major characters are vastly talented, I also admired the ensemble members, including Maggie Caliendo, Ella Miller, and Hannah Wiyrick. They walked about with bits of business and mimed background conversations, adding interest without upstaging those speaking. One quick silent bit had me giddy with both delight and envy. Coulter's Lucy demands water, and Caliendo brings it. While Lucy drinks, Caliendo's unnamed character stands by for a few moments, with subtle gestures and expressions stating wordlessly, Didja see that? She picked me, and I brought the water like a boss! 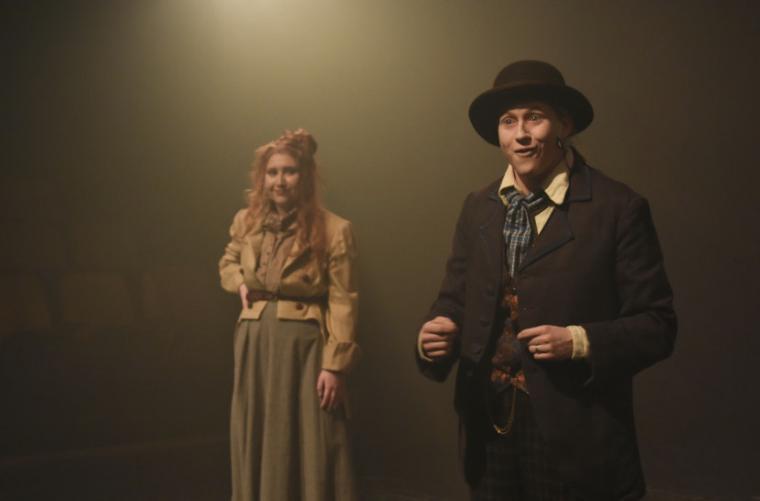 Cameron Strandin has designed many a spectacular set, both at Augustana and at the Timber Lake Playhouse, and this one boasts a high platform, providing bountiful playing space on and under it. From the audience's perspective, it's a theatre's backstage area, the floor striped with colors from the painting of set pieces. Above and behind Strandin's set, a video screen displays song titles and lyrics – which I initially thought was Augie's modern touch until I learned that the original stage directions called for a sign with the titles to be lowered from the flies.

Costume designer Emily Bushá provided luscious garb boasting rich colors and meticulous details. And with live musicians always a plus, the ones here can he found sitting onstage, behind the action. They were excellent, and I didn't hear any discordant notes (other than those Weill intentionally put in the score). Unfortunately, though, the music was at times so loud that it completely overwhelmed singing and dialogue.

There were a couple of other technical irritations for me. The theatrical fog looked convincing, with only a faint odor. However, it still stung my eyes, which were already in pain from two small spotlights seemingly aimed right at my retinas throughout the entire show. (Boy, did I pick the wrong seat … .) Yet rehearsal gaffes such as these may have been worked out by the time Augustana's The Threepenny Opera opens on Thursday, and the talent on display outshines whatever issues may persist. You've only got one weekend to catch it, and this is one of theatre's must-sees.

The Threepenny Opera runs at Augustana College's Brunner Theatre Center (3750 Seventh Avenue, Rock Island IL) through May 8, and more information and tickets are available by calling (309)794-7306 and visiting Augustana.edu/tickets.