American Hustler: "How to Succeed in Business without Really Trying," at Augustana College through May 5 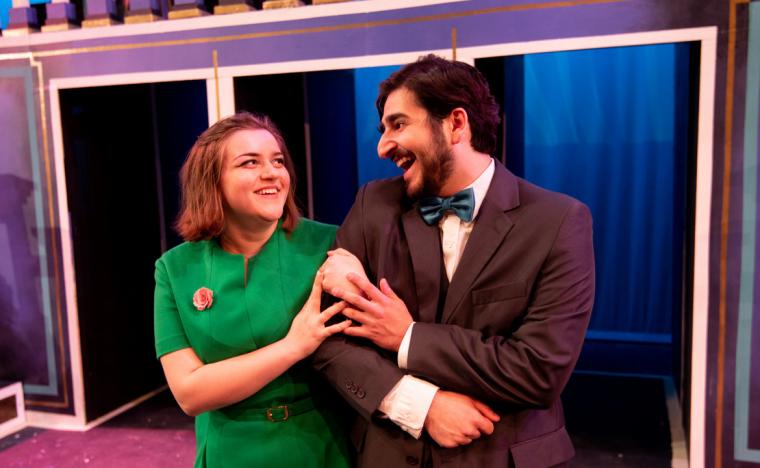 I saw Augustana College's exhilarating April 27 production of the musical How to Succeed in Business without Really Trying – the 1961 show that was adapted for film in 1967, and that won seven Tonys, boasts a script by Abe Burrows, Jake Weinstock, and Willie Gilbert and music and lyrics by Frank Loesser, and is based on the book by Shepherd Mead. When you see it, arrive early, so you have time to gaze properly at RaeEllen Walker's dazzling, Art Deco-inspired set with its white floor and black "marble" inlay, turquoise columns, and gold-trimmed black mezzanine and stairs.

Shifting hues of light play atop the set and on the cyclorama (the backdrop drape which also conceals backstage actors and crew), and the cyc tends to billow in their wakes – which, admittedly, can be distracting. Meanwhile, the pre-show and intermission soundscapes include jazz standards and audio clips from instructional films of the 1940s and '50s [including The Trouble With Women, produced for the Quad-Cities' own Alcoa (now Arconic)].

During World War II, American women took over many jobs to free men for battle, but consequently, the idea of women pursuing post-war careers still didn't fly with some men. As How to Succeed reveals (and mocks), 20 years after this revolution, the male-dominated world still saw most women as secretaries, scrubwomen, wives, or mistresses. (As director/choreographer Shelley Cooper points out in her program notes, the imbalance of work roles for women and men persists today.)

Protagonist and aspiring businessman J. Pierrepont “Ponty” Finch (Rami Halabi) is so confident and eager to learn that he doesn't actually need the How to Succeed book that he clutches like a talisman throughout. After a few gaffes, he catches onto corporate culture and finds creative (and sneaky) ways to bypass the dependable but slow track to success. (Spoiler alert: He succeeds, and despite the rest of the show's title, he actually really tries.) Halabi engages us with his starry eyes, greenhorn grin, and energetic enthusiasm. This Ponty is likeable – mostly. 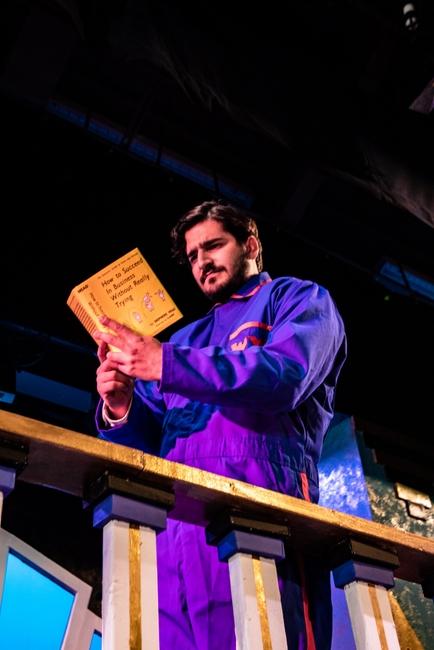 Brycen Witt plays the boss' nephew Bud, who has it in for Ponty from the start, and Bud's customary ploy of petulantly running off to tattle to his relatives evolves into a deliberate campaign to ruin Ponty's career. Witt is a hilarious, rude, yet stylish villain. Each of his entrances instilled gleeful anticipation, making me wonder what he'd be up to next.

Halabi and Witt, in particular, "got the moves like Jagger," but the physicality of the whole cast is exceptional. They strike poses, leap, whirl, collapse, and deftly fling props around, and their movements, whether rubbery or explosive, are sometimes as outrageous as those of cartoon characters. (When one man sticks a finger in another's face and leans forward, the threatened party bends backward into an improbable arch.) And the secretaries' and executives' dancing is spirited, but controlled. On April 27, there were no collisions on the packed stage during the rah-rah anthems about the company way or How to Succeed 's anguished ode to caffeine deprivation.

Lauren Larson is an appealing Rosemary, the secretary instantly smitten with Ponty, who daydreams of marrying him and moving to a mansion (though, as she sings, she'd usually be alone because he'd be at work, naturally). Larson cuts the sweetness of her mushy crush with some refreshingly girlish giggles and piquant assertions of self-hood. I rooted for her all the way, and Rosemary's friend, adviser, and matchmaker Smitty (Muriel Melgoza) is a vibrant spark throughout.

Drew Gilson was fully satisfying as J.B. Biggley, imbuing his bossly bluster and suspicion with endearing quirks and flaws. His magnificently sung "Love from a Heart of Gold" was 98-percent sincere, with just a small taste of studied, deliberate ham making the number perfectly delicious. 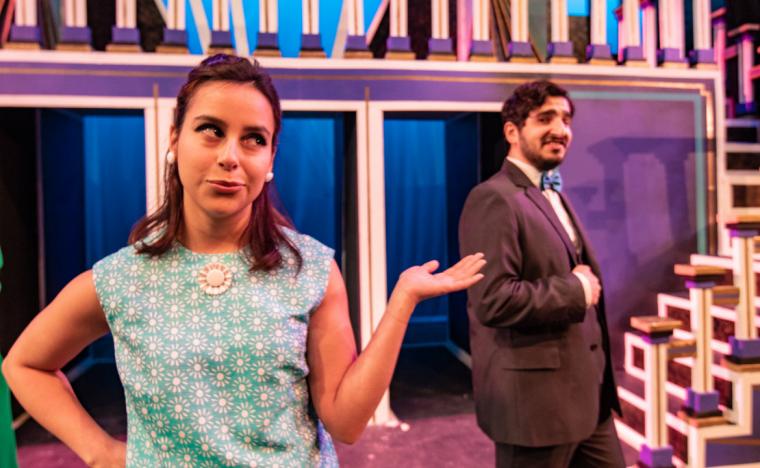 Abby Overmann's Hedy LaRue, a former cigarette girl (the era's equivalent of a Hooters waitress), is delightful as she tries to class up her act at the office with curtseys and formal-sounding (yet wrong-headed) turns of phrase. Her enjoyment of the male species seemed as sincere as theirs was of her – Hedy's attractions didn't seem like calculated means to ends, even if they turned out that way.

Jacob Pecaut's Gatch and Stephen Lewis' Ovington were standouts in their very different interpretations of a smug jerk. If I had room, I'd also praise each member of Cooper's company. The fresh, unexpected line readings, usage of varying speaking volumes and speeds, comedic takes, and many quick but impactful character bits make this classic material feel new. (I was also struck by the natural background acting.) The audience's murmurs of narrative surprise and disappointment proved how thoroughly the show captivated them. And the songs are blessed by first-rate voices and blends – whether solo, duet, trio, or ensemble – as coordinated by musical director Michelle Crouch.

It might've been hard to keep track of who was who in this cast of dozens if not for costume designer Ellen Dixon's use of color, as character alliances are made clear through matching wardrobes. (Most of the drones' corporate suits, however, stay blue and black, while the secretaries' sherbet-colored dresses and fun jewelry are quintessentially early-'60s.)

I wish Cooper's blocking had taken the performers up and down its stairs, and across its top level, more often – it’s such a gorgeous scenic piece. But college theatre has truly upped its game since I was in school. This How to Succeed in Business without Really Trying is an impressive, polished, exuberant experience.

How to Succeed in Business without Really Trying plays at Augustana College' Brunner Theatre Center (3750 Seventh Avenue, Rock Island) through May 5, and more information and tickets are available by calling (309)794-7306 or visiting Augustana.edu.