And Then There Were Nuns: “Drinking Habits,” at the Richmond Hill Barn Theatre through April 10 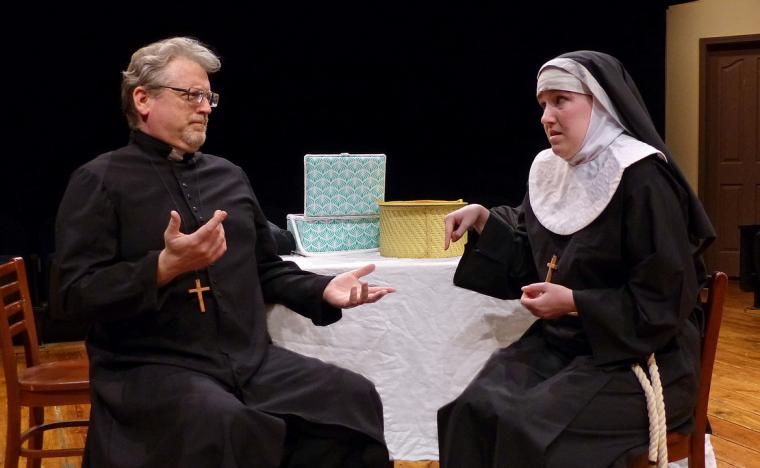 Holy. Moly. That’s about all I can say about the Richmond Hill Barn Theatre's latest production Drinking Habits, directed by Mike Skiles. But alas, likely you’re wanting more details than a simple exclamation, so let me spell it out for you: This was the most ridiculous piece of theatre I believe I’ve ever seen. The fault lies wholly with playwright Tom Smith and in no way reflects the production quality. It’s just that Smith's script was over-the-top farcical … and somehow completely unbelievable yet utterly predictable.

This isn’t to say that Skiles’ production isn’t good. His cast of eight, minus a few line-slip-up issues here and there on Saturday, was entirely capable, and certainly appeared to be having a good time. The plot seemed rather straightforward, as well. Smith's basic premise is that two nuns, Sister Philomena (Terri Nelson) and Sister Agatha (Carol Neuleib), have been making wine for years in order to earn enough money to keep their little convent open. The pair must keep their vino-making a secret, however, because their Mother Superior (Julie Gray) is vehemently against alcohol – so much so that even the very word cannot pass through her lips. (Instead, Mother Superior only uses euphemisms such as “Satan’s Toilet Water.”) Gray’s Superior is, however, curious – not forceful or stern the way you’d perhaps expect – and her leadership style sure seems to work for her and the other two sisters at the Sisters of Perpetual Sewing. Nelson and Neuleib, meanwhile, certainly complement each other very well, their chemistry suggesting that they’ve been cloistered together for years on end while keeping a secret as huge as making wine. 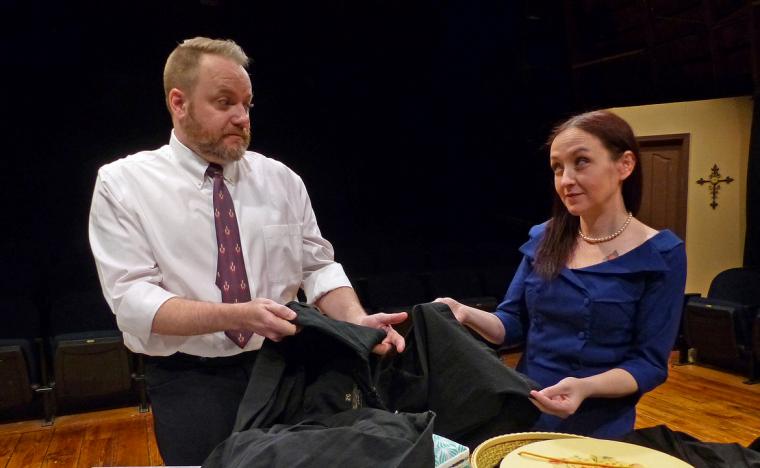 Hot on Sisters Philomena's and Agatha’s trail are Paul (Justin Raver) and Sally (Dana Skiles), two reporters trying to break a front-page story. As they decide to go undercover to get to the bottom of who is making the town’s award-winning wine, they cause a big stir, given that Father Chenille (David Beeson) feels like he is going to be replaced at his parish. So he enlists the groundskeeper George (Tom Akers) to help him keep tabs on the reporters’ whereabouts. When Elizabeth Shaffer’s Sister Mary Catherine arrives as a new sister to the convent (and with her own secrets to keep), Mother Superior immediately marks her as a spy. Why all these seemingly normal religious people believe Rome is sending out spies right and left is beyond me, but admittedly, so is most of the plot. Just go with the flow and don’t think about the details too much.

It’s best to not think about the costumes much, either. Ann Keeney-Grafft did a fine job rounding up habits, cassocks, and collars, but the Cardinal’s garb didn’t make a lick of sense, nor did Sally’s reporter’s outfit. Dana Skiles looks great in blue, but it’s also highly unlikely that anyone in a convent would readily believe someone wearing a short skirt was a religious sister. A smart pair of slacks would have easily solved that disconnect, but, because the entire plot necessitates the willing suspension of a great deal of disbelief, this is just one more minor detail to overlook. Focus instead on the many costume changes – including the fact that Raver changes in the closet multiple times – and less so on clothing specifics. 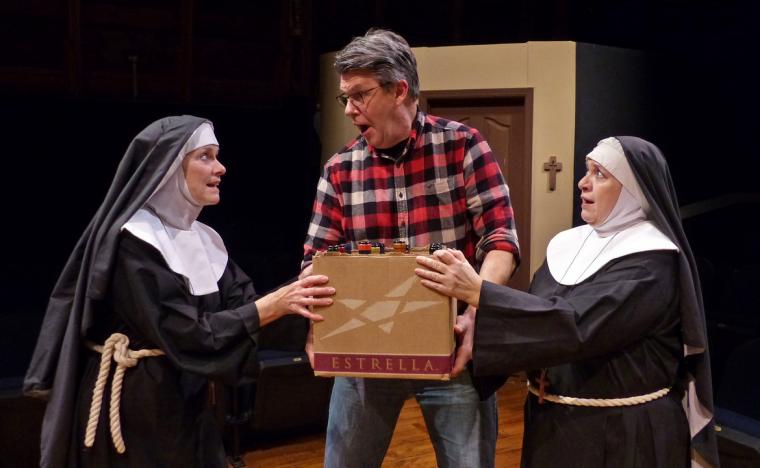 While most of the verbal jokes in Drinking Habits skew more toward groan-worthy than legitimately comical, some of the more religious one-liners hit their mark, particularly an aside about Raver being a Jesuit, which made at least the presumed Catholics in the audience guffaw. But Skiles and his cast excel at the situational comedy they’re presenting. The Barn’s in-the-round setup works perfectly for farce and Skiles’ cast uses the space beautifully. In this order, it so happens that the sisters observe periods of silence in which the church bells toll, and the montages in silence are fantastic fun and proof positive that silence truly is golden. Actually, in reality, the only silence was the on-stage action, considering Richmond Hill's patrons themselves were roaring. In these moments, Skiles’ cast really shines, coming in and out every available door, pointing fingers, stomping feet, and shooting intense looks that convey all that goes unspoken.

How does it all end? If you’re at all paying attention, you’ll understand why George finds Mary Catherine familiar immediately, but really … who cares? I believe the ending will still likely leave you agape, but also just as likely smiling, because who doesn’t like a happy ending and magic tricks? It’s all mindless fun, and truly, the only way Richmond Hill could better the experience is by allowing patrons a glass of wine in the theatre itself. I'll admit I was shocked to learn from the trusty Internet that Tom Smith has penned a sequel, Drinking Habits 2. Yet should Skiles get the band back together next season, I’d show up just to see how much more ridiculous things can get.