Around the World in 60 Minutes: “The Little Prince,” December 7 at St. Ambrose University 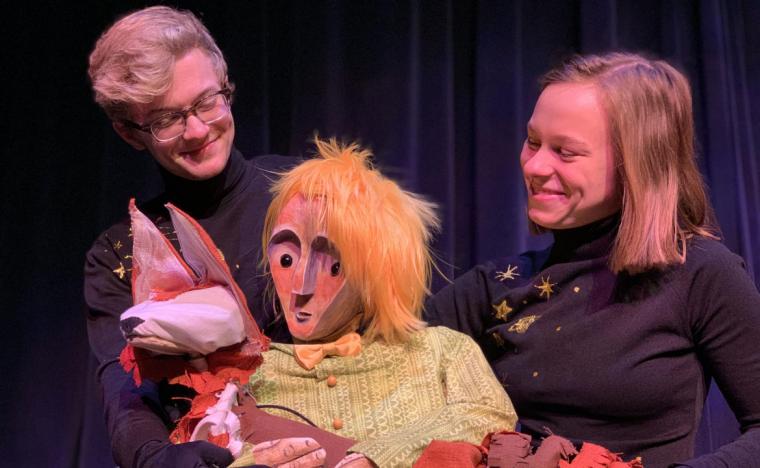 Joseph Lasher and Quinnie Rodman in The Little Prince

Entering any theatre venue usually puts me in a good mood. A few places resonate especially deeply inside me. For instance, I love walking into Allaert Auditorium in the Galvin Fine Arts Center on the St. Ambrose University campus. It was my home-away-from home before, during, and after my four years of theatre study there.

The university's current offering is The Little Prince, based on the best-selling, much-acclaimed 1943 novella by French writer-artist Antoine de Saint-Exupéry. The author disappeared the next year while flying on a mission for the Allies in World War II. It's tragic that he never knew how many people all over the world would love his book, and how much.

There's also much to love in this heartfelt script and production, which people of all ages will enjoy. Local playwright Aaron Randolph III wrote the adaptation, which debuted in May at the QC Theatre Workshop where he serves as artistic director. St. Ambrose theatre-department chair Daniel Rairdin-Hale helped develop the play and directed this production. (Both also are Ambrose grads, and here I include a disclaimer that my enthusiasm for this show is not because this is my alma mater!)

The staff and crew utilize this venue's size to wonderful effect. The large proscenium stage is expanded even more by a huge star-field on the backdrop that extends onto the theatre walls around the audience and up onto the arch. The stars are replaced with a concentrated circle of hot yellow light when the scene changes to the desert where the Aviator (Jeremy Mahr) crashes. These changes from the starry universe, from which the Little Prince (Joseph Lasher) has descended, to the sweltering here-and-now of the crash site, handily help us understand which scenes are flashbacks.

Mahr, an esteemed performer on area stages, plays the bewildered, scared, and frustrated Aviator who is the Everyadult of the play. He is lovable and sympathetic as he tries to rebuild his plane and escape his desperate situation. The Little Prince is Everychild – an explosion of ideas, questions, and distractions portrayed beautifully and dually by Lasher. I say "dually" because the Little Prince's body is a puppet, attached to the feet of the black-clad performer, who deftly operates the head and arms with his hands – all the while mirroring the character's attitudes and emotions with face and voice. 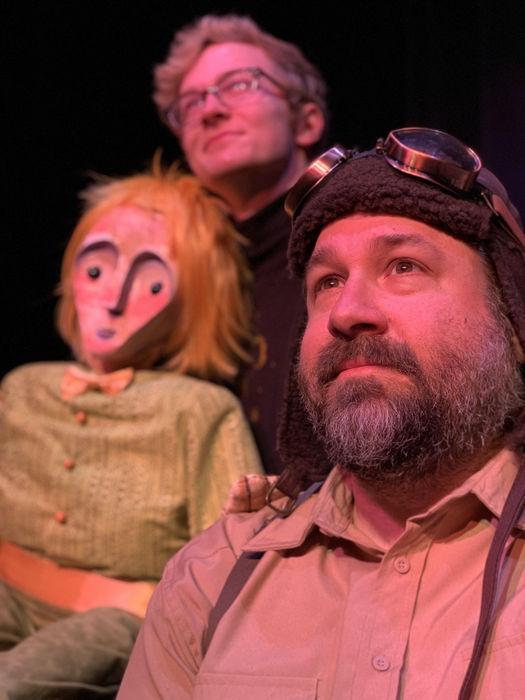 Dual portrayals also are handled by the Rose (Mary Rose Procinski), the Fox (Quinnie Rodman), and the Snake (David Weaver). It's surprisingly easy to watch the actors' faces and their puppetry simultaneously, and view each pair as one being. (The puppets of these three are marionette and hand-puppet style, not attached at the feet, which require different, but not easier, manipulations.)

Director Rairdin-Hale created the appealing puppets, to which the performers give credibility with their dexterity. Much practice obviously went into the puppetry aspect, and it's very effective. Rodman, in particular, makes the Fox (who gets more stage time than the Rose and Snake) amazingly lifelike and natural.

Besides Mahr, the puppet-free performers include Sarah Goodall as the King, Luke Peterson as the Conceited Man, T.J. Green as the Businessman, Sam Lange as the Geographer, and Abigail Carpenter as the Lamplighter. They play others whom the Little Prince has met in his explorations. Each is boisterous, droll, and closed-minded, each repeatedly hammering one note in a universe in which the keyboard actually goes on forever. (The Lamplighter is less boisterous, as she is too busy and exhausted to do anything but light and douse her lamp.) These five are the Überadults, whose singular attitudes the Little Prince, as well as the audience, recognize in the Aviator as he tries to solve his immediate quandary in the desert. This is an ingenious bit of script-writing that adds greatly to the story. It's an example of how theatre can do more than just re-tell a story live. It also can enhance themes in a way that the author had not written explicitly.

The actors playing these archetypes wear commedia dell'arte-style half-masks, which are effective in helping to convey their characters' detached natures. Unfortunately, they tend to muffle the actors' voices at times. While I'm talking about sound, I must give a shout-out (heh heh) to the young audience at the Thursday performance I attended. Before the show, there was exuberant chatter and bouncing around. The very instant the house lights went off, though, the children were attentive and silent. I seldom see adult audiences so well behaved. I salute these respectful audiences!

Whether you know the story of The Little Prince or not, you'll be captivated. I advise you to simply experience every moment like an Everychild, and not try to make sense of it all during the show like an Everyadult. The narrative is a color-changing cloud of ideas light and dark – as confusing, funny, sad, hopeful, paradoxical, real, unreal, ephemeral, and eternal as existence itself. You'll have time to think about it later; maybe read or re-read the book. And, I hope, appreciate every moment of your life no matter how bleak it may seem.