Art of the Darkness: “My Brother's Gift,” at the Black Box Theatre through September 11 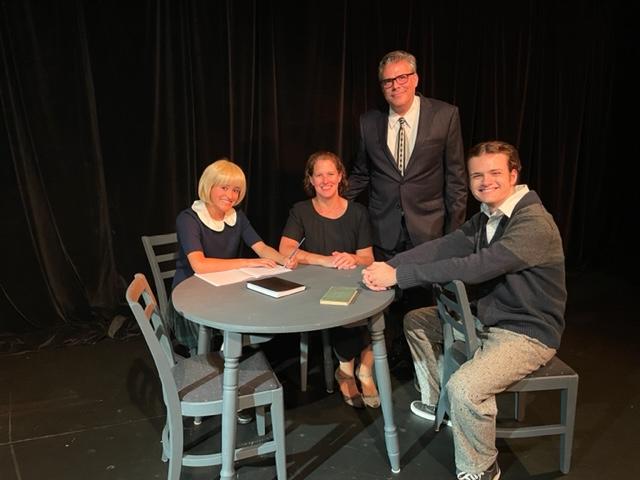 Only those who endured the devastation of World War II can fully understand it. Among those horrors was the Nazis' imprisonment, torture, and execution of millions of Jewish people, Soviet prisoners of war, and others deemed "subhuman." Often, mass tragedies are best understood not through bare statistics, but through personal stories of those affected. My Brother's Gift, a play by Claudia Haas based on the real experiences of survivor Eva Geiringer Schloss, tells one of these stories. I saw it on Saturday at the Black Box Theatre, and director, designer, and Black Box co-founder Lora Adams and her cast and crew have put together a spare, straightforward production that serves both as a remembrance and a call to action.

This is a one-act version of the script, and was probably adapted for young audiences. Considering the subject matter, it has a light touch; there are no Nazis onstage, and no violence is shown. The story is framed by Patti Flaherty, one of our area's most prolific actors, as the adult Eva Schloss. She's at a lectern, and we are seemingly attending one of the real talks Schloss still gives. While Flaherty speaks with an Austrian German accent, the other actors, as seen in flashbacks, use their natural American inflections. This is a logical staging choice, as Eva wouldn't perceive her own family as having any dialect.

As young Eva, Wrigley Mancha performed admirably, as I expected she would. She's terrific on large stages, and I was eager to see her in this intimate venue. In this role, as in others, Mancha convincingly plays a few years younger than her actual age, and her Eva was yearning, eager, and sometimes temperamental. Charles Thomas Budan is captivating as Eva's brother Heinz, the affable, protective older sibling. Heinz is a talented musician who now must turn to poetry and painting for expression, due to the silence required while the family is in hiding. Schoss sees Heinz, understandably, through the starry girlish eyes of nostalgia and grief, and wrote this role as almost too saintly; it was actually a relief when Budan changed his demeanor to play Heinz's darker, fearful moments. Budan utilizes a dazzling, everything-is-fine smile fit to cheer up almost anyone – as well as a despondent air that, on Saturday, made me feel like nothing would be all right ever again. (He recently played Romeo at Genesius Guild with a similar, effective emotional range.) 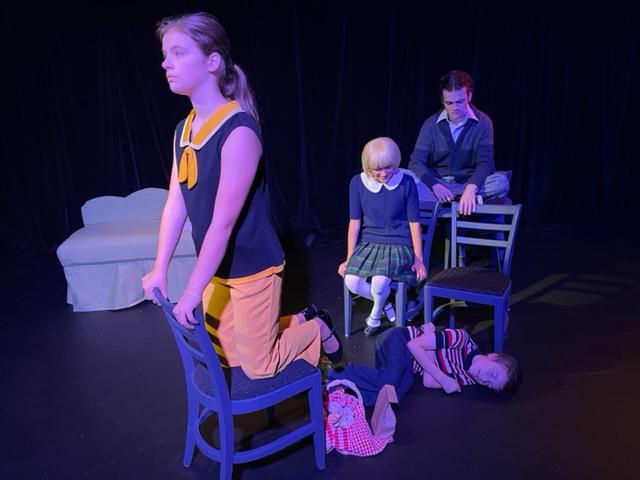 Jennifer Cook Gregory, as Mutti ("mother"), and Mischa Hooker, as Pappy (pronounced in the European manner as "poppy," not like "Pappy Yokum"), are also well cast. Together, they are utterly convincing as loving, worried parents safeguarding their children, while still trying to reassure them. Gregory's Mutti is caring, and shows determination in all matters concerning her family's well-being – from finishing homework to hiding from Nazis. Hooker's Pappy is a kind, bewildered, and slightly bumbling father, and the actor provided a satisfying, fully realized interpretation of his character.

Paige Jackson, a multi-faceted performer, plays Sanne, a friend of Eva and Heinz. Sanne is a likable girl whose staid imitation of the siren Lorelei, in my opinion, should go completely overboard (excuse the pun). A quiet playmate going all Norma Desmond while luring those sailors would add to the much-needed levity provided by Ben Bergthold as another friend, Herman. Bergthold is a winning young guy whom I've enjoyed as Charles Wallace in the Playcrafters Barn Theatre's A Wrinkle in Time and Kurt in the Spotlight Theatre's The Sound of Music. Deservedly, he gets the most laughs here.

Lily (Larsen) Crichfield does well in her small role as Mrs. Jansen, who helps hide the family. Finally, Doug Kutzli personifies the Nazi regime via a voice recording. His dispassionate recital of the many restrictions against Jews (and the same words appearing on an on-stage screen), effectively conveys the enormity of the hatred against them. Throughout the play, that screen displays projections of photos of the real Geiringer family and of Heinz's artwork, with the projections and lighting designed by the multi-talented Roger Pavey Jr. (who also reviews theatre for the Reader). 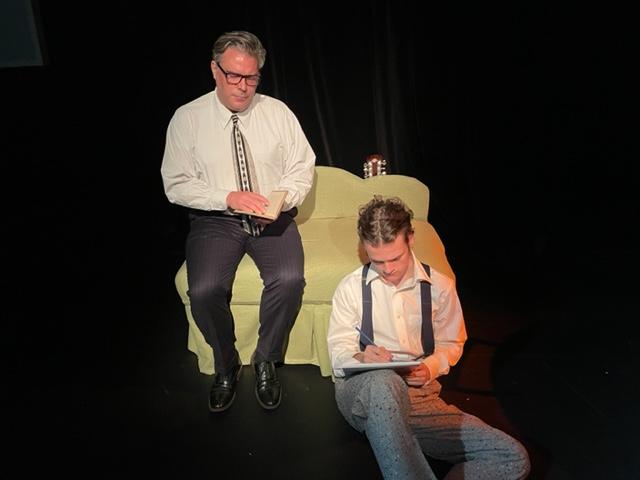 Parts of the play seemed under-rehearsed, as some moments were stilted, and at times, actors seemed distracted. Also, a few aspects of the production didn't make sense to me. A scene near the beginning, with actors lip-syncing to their own recorded voices, was repeated later with them simply speaking the same lines. Other scenes, however, stood out as lively and engaging. As adult Eva recounts Heinz's performance of the Snow White story, the family watches raptly. Heinz's back is to the audience, so we get to see his sister's and parents' honestly delighted faces. Purely physical reactions are difficult to pull off. This scene, though not a pivotal one, seemed like a genuine, vivid window into the past.

As My Brother's Gift reminds us, the Third Reich is just one example of those perpetrating hate-filled atrocities throughout history, and right now across the world. We who did not live through World War II must be mindful of these almost inconceivable crimes, rather than picturing that global conflict only with marching platoons of spiffy young soldiers, scrap drives, and the Andrews Sisters.

My Brother's Gift runs at the Black Box Theatre (1623 Fifth Avenue, Moline IL) through September 11, and more information and tickets are available by calling (563)284-2350 and visiting TheBlackBoxTheatre.com.