Stalking, On-Air: “The 39 Steps: A Live Radio Play” at the Black Box Theatre through August 30 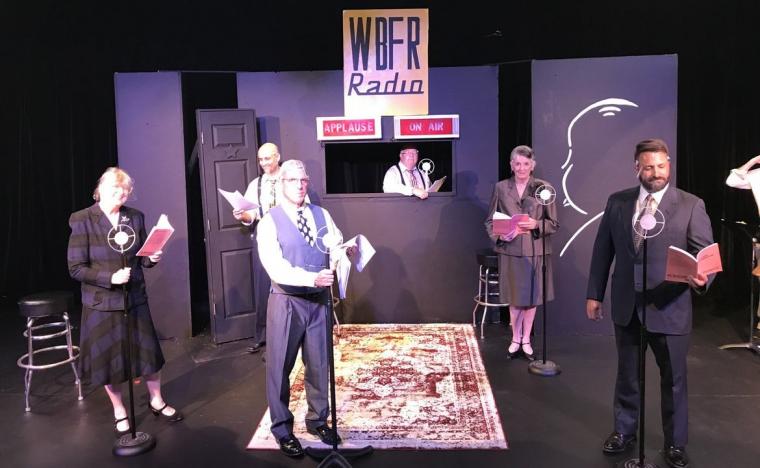 If you’re hoping to see some live theatre to forget COVID-19 and the pandemic we’re in, then the Black Box Theatre’s latest, The 39 Steps: A Live Radio Play, is not for you – because director Lora Adams and her fantastic cast have embraced the challenges of producing theatre in 2020 in a way that manages to pay respect to this invisible virus while still keeping the show lighthearted and charming.

From the opening moment in which Jim Driscoll appeared with a six-foot stick, measuring to ensure no one in the audience was sitting too close to the stage (they weren’t) and that each microphone for this radio play was also properly spaced, our Thursday-night audience snickered. It felt like we all embraced the underlying theme of the evening: respect the virus, yes ... but the show must go on, right? The Black Box is doing everything right to make everyone who walks in the door feel comfortable with being back in the theatre during an international pandemic.

For her 39 Steps, Adams designed a lovely set reminiscent of an old-fashioned recording studio that was the perfect setting for this radio version of one of Alfred Hitchcock’s classic stories. (Tom Vaccaro and Sara Nicole Wegener did a great job with the scenic painting, including the addition of an iconic silhouette.) Adapted by Joe Landry, the play follows Richard Hannay (an enthusiastically talented Driscoll) as he runs into Annabella Smith (Susan Perrin-Sallak) at a music hall as she’s running from two strange men. When Smith ends up dead, the innocent Hannay becomes the main suspect, and is soon on the run across the U.K. as he tries to clear his name and figure out what on earth really happened. 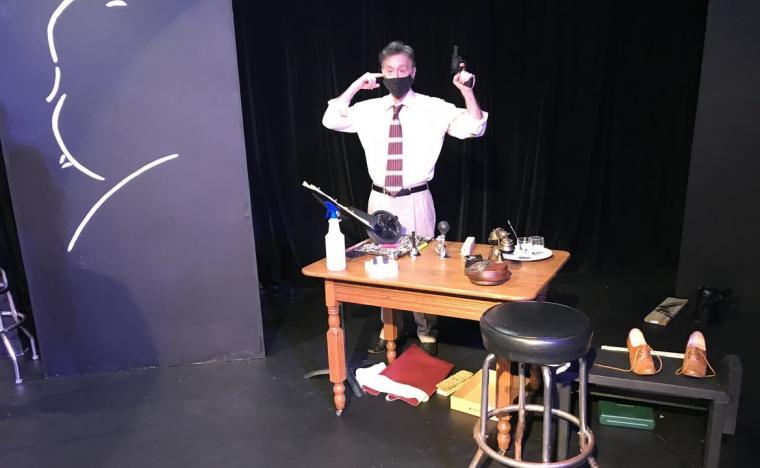 Along the way, the vocal talents of the rest of the cast come into play, with my favorite recurring bit being when the cast talks over each other in crowds with all manners of crazy accents. And Patti Flaherty quickly becomes a fan favorite. Her main character Pamela is hesitant, at best, to get involved with Hannay, but Flaherty brings a certain spunk to the role, and it's fun to see flashes of Flaherty’s personality shine through. She's a highlight of this production as a whole, yet each actor brings their own on-stage persona to life in distinct ways, making the production chock full of small details and moments of shared eye contact between cast members. It was clear to me this gifted group has dearly missed being on stage as much as the QC community has missed seeing live theatre.

Every necessary safety guideline was followed, with the on-stage talent wearing the soon-forgettable face shields, but they weren’t afraid to have a little fun with their virus safeguards. For instance, the abundance of disinfecting spray is currently reality, but it was definitely played up for comedic effect beautifully. Phil Dunbridge plays the resident worrywart when it comes to preparedness: When he wasn’t voicing his characters (or, as the lobby boards stated, “lots of people”), he was keeping the stage sanitized.

Scott Tunnicliff, deadly serious and incredibly brilliant, portrayed the radio announcer. With his purposely dry and choppy delivery, he somehow managed to keep a straight face during the introductory remarks and commercial breaks that were rife with jokes. (While some previous Hitchcock knowledge is certainly helpful to catch all the nuances of the evening, it is definitely not a requirement for your enjoyment.)

I would say that Vaccaro was the silent member of the company, but as The 39 Steps' Foley Operator, he was charged with creating the countless sound effects required for a radio production, so while he never technically spoke, he surely made his presence known. (I personally wished Vaccaro had been more visible from where I was sitting, because unfortunately, I missed some of his actions.) Vaccaro’s sounds were supported by Matthew Walsh, who was in charge of all of the production's door noises. Walsh also is credited as the voice of “lots and lots of people” and was a similar delight throughout the evening, presenting some physical-comedy gold during one of the “commercial breaks” that I won’t spoil here. 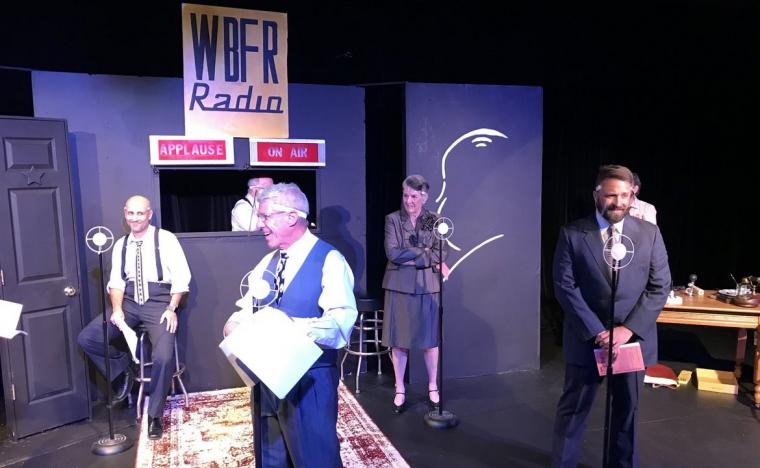 Adams also serves as her show's costume designer, and everyone’s outfits helped to set up the throwback time period well. My favorite costuming detail was that every gentleman sported a classic art-deco tie – the loud-and-proud patterns really (ahem) tied the group together and made them seem even more cohesive. This cast has clearly bonded, and is clearly excited about their time together on stage.

Live theatre is all about community, and while Thursday’s opening-night audience was small, we were mighty. And maybe it was just because of the months-long lack of community we’ve all endured lately, but we patrons laughed and exchanged glances together throughout the hour-long production as we were swiftly swept into this comedic thriller.

Throughout the evening, The 39 Steps: A Live Radio Play served as one great leap into a world in which the characters' biggest concern was running from murderers. While not entirely escapism given the plentiful precautions reminding us of current COVID realities, it was an experience I’m excited to repeat soon, and a production you shouldn’t miss.

The 39 Steps: A Live Radio Play runs at the Black Box Theatre (1623 Fifth Avenue, Moline through August 30, and more information and tickets are available by visiting TheBlackBoxTheatre.com.