Back in Baby's Arms: “A Closer Walk with Patsy Cline,” at the Timber Lake Playhouse through October 10 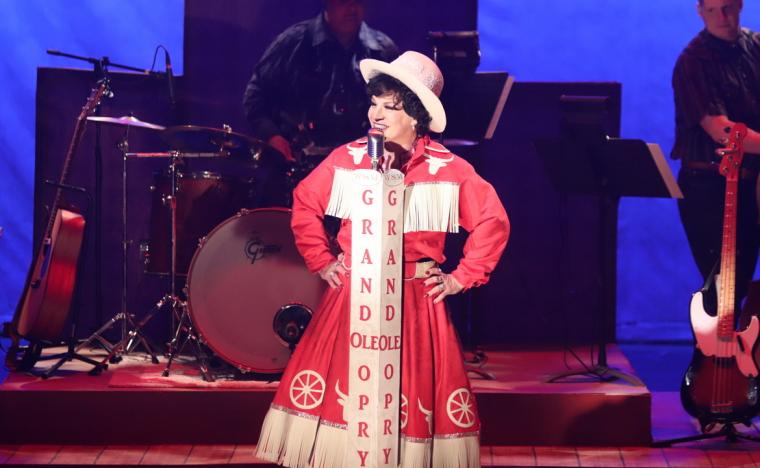 Felicia Finley in A Closer Walk with Patsy Cline

You don't need to know anything about Patsy Cline, one of the all-time queens of country music, to love A Closer Walk with Patsy Cline. But here's a little background anyway: She started in country, crossed over into pop and gospel, passed away in 1963, and her expressive singing has influenced performers and entranced millions for more than 60 years.

The Timber Lake Playhouse is now effectively bringing her back to life in this presentation by Dean Regan. First produced in 1991, it's one of two tribute shows approved by her estate, the other being Always … Patsy Cline (the Clinton Area Showboat Theatre production of which I reviewed at summer's start). I attended Thursday's opening-night performance of A Closer Walk, and applaud director Dana Iannuzzi; music director, conductor, and on-stage pianist Sam Columbus; and the cast, staff, and crew for their thoroughly exceptional production.

Felicia Finley, who has originated several roles on Broadway, portrays Patsy, and she has tailored her magnificent voice to match the singing star's distinctive delivery. I was especially impressed by her powerful low register – Patsy was a contralto (the rarest vocal range), which contributed to her groundbreaking style. Finley also employs interesting nuances in her speaking voice, maybe deliberately echoing Patsy's Virginia accent. I don't know enough about Southern inflections to be sure, but it wasn't a generic drawl.

Costume designer Terrie Miller supplied an array of attire for all seven of the show's performers. Patsy's sartorial parade begins in simple Western street clothes with sparkly boots and belt. Next, she appears in an over-the-top, red-and-white, long-fringed number, including a skirt splashed with wagon wheels and steer heads, representing the cowgirl stagewear Patsy's mother made. Her Act II clothing includes a stunning bronze cocktail dress and a slinky black evening gown.

This show is basically a concert with a few brief dramatic scenes – and that's just fine. Her youth, struggles, and the stress of fame aren't mentioned. Family? Just quick references to her mama, husbands, and young 'uns. Personally, I would have liked to hear more about her industry trailblazing and enduring influence. However, the essentials of Patsy's tale are told by her increasingly sophisticated clothing and progressively larger venues. Meanwhile, John Burkland's ingeniously evocative lighting accomplishes the bulk of the setting changes. In one instance, a subtle haze drifted down to enhance the lighting effects … and I enjoyed it, rather than coughing amidst billows of smoke. Now that is how you do theatrical fog!

Timber Lake mainstay Darren Mangler is the only other "official" cast member, although the onstage musicians provide some chatter throughout. He plays Little Big Man, a disc jockey (and our de facto narrator) at WINC, the call sign of the real hometown station where Patsy made her broadcast debut at 15. He also appears as a talent manager, as well as a morose Vegas comic and an odd hick personage who wanders onstage before Patsy performs at Carnegie Hall. Interestingly, I later found out that she was not the star attraction that night – her name is last on the poster! It was actually Faron "Hello Walls" Young who headlined (look him up, because he was very famous), along with Ferlin Husky both with his band and as his comic persona Simon Crum. I would've liked a line in the script or the program explaining this, as Mangler's bumpkin act really confused me.

As the early 1960s DJ, though, Mangler provides chuckles and just enough period atmosphere. Also, as a stand-up himself, he's a natural portraying the comedians who perform before Patsy. However, these bits go on longer than I would have liked, stalling the momentum. They were probably meant to fill time for Patsy's costume and wig changes, but I'd rather have heard more anecdotes from the DJ, or more band banter.

And about that band! Along with their fantastic instrumental prowess, these musicians provide backing vocals throughout, and can act, too. I was tickled beyond words to see two actors from Timber Lake's July production of The 25th Annual Putnam County Spelling Bee, as Roy Brown (formerly Spelling Bee's peevish William) plays bass – upright in Act I; electric in Act II – and Joey LaPlant (previously the delightful Leaf) plays lap steel guitar.

The real Patsy covered many tunes recorded by others, as Finley does here, but the most enjoyable ones in Timber Lake's show are those Patsy popularized, including "Walkin' After Midnight," "Sweet Dreams," "I Fall to Pieces," and "Crazy." At one point, Little Big Man solemnly avers that perhaps it was Patsy's near-fatal car crash that led her to cover "Just a Closer Walk with Thee." This sounded wrong, and later, I confirmed my suspicion, as the singer released her most famous gospel tune in 1960, whereas her car accident was in 1961. I understand dramatic license; it's necessary. But with so few spoken words in this particular script, why not make them all accurate? Librettist Regan need not have invented Little Big Man's line as a neat transition.

As I recall this production days after seeing it, special moments linger. Finley's swift, exuberant little side-steppin' kick during her first number. Little Big Man and the band performing the "Ajax, the Foaming Cleanser" jingle. Patsy's gig at the Mint Casino when she's back-lit by a narrow-beam spotlight – outlined with dazzling white rays against a dark purple wash. Heartbreak is ubiquitous in country songs, but we don't have to know the real heartbreak behind the music. A Closer Walk with Patsy Cline is a refreshing musical feast for the eyes and ears, with its title character's troubles expressed only in lyrics.

A Closer Walk with Patsy Cline runs at the Timber Lake Playhouse (8215 Black Oak Road, Mt. Carroll IL) through October 10, and more information and tickets are available by calling (815)244-2035 and visiting TimberLakePlayhouse.org.