Ballot-eers: “Grace for President,” at the Circa '21 Dinner Playhouse through May 14

The Circa '21 Dinner Playhouse's new family musical Grace for President is based on the 2008 book of the same name, written by Kelly DiPucchio. Children’s theatre, as a live-performance medium for adaptation of these books, is magical for kids – it brings all of the familiar characters and important messages to life, doing wonders to young imaginations. And Circa 21’s Grace for President, on April 23, delivered an adorable and lively performance that no doubt engaged and inspired hopeful young politicians.

In this hour-long presentation, student Grace Campbell is bewildered after realizing that there have been no female U.S. presidents, so she runs for class president against her male opponent. During the production, we receive important messages about voting, recycling, and friendship. And while, unfortunately, no elementary-aged child is going to go out and immediately run for president of the United States or vote in the November midterms (mark your calendars, adults!), this musical shows the importance of voting and using one’s voice. This is relevant and important for kids to see, and delivered, here, through fun song-and-dance numbers and larger-than-life kid characters.

Playing our titular heroine is Audrey Seneli, and as the show's only non-adult cast member, she proves far beyond her years as a performer. Seneli portrayed the charismatic Grace in this professional production enjoyably and well, and shared the stage with six equally talented and charismatic individuals, some of whom doubled in multiple roles. 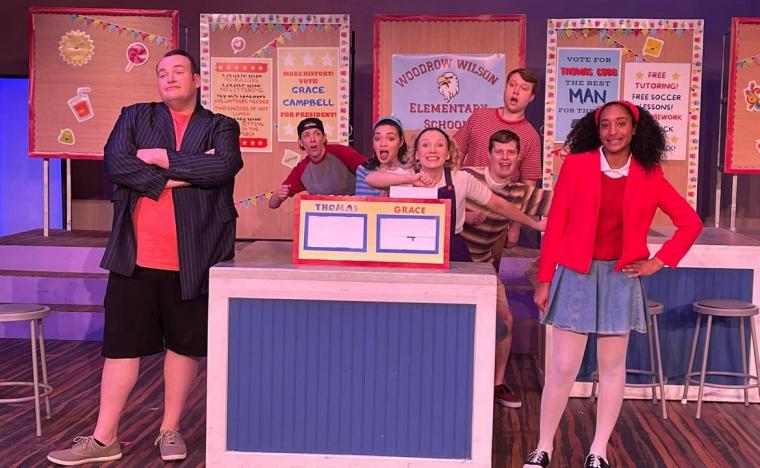 Among the actors who leaned into the youthful energy of their characters, Marc Christopher, in particular, really honed in on the off-in-dreamland nature of a bored school kid with his portrayal of Grace's classmate Henry. He doubled as the contrasting know-it-all teacher’s pet Thomas, who was Grace’s presidential opponent in the class president election, and also performing double-duty were cast members Rachel Winter, Lexi Rae Smith, and Emmett Boedeker, who played school kids and teachers. They all switched their demeanors in playing differently aged roles while providing clear differentiations for a young audience to follow.

Rounding out the cast were Sarah Hayes as Robbie, a cool, backward-hat-wearing student and Grace’s peer, and Derrick Bertram as Sam, a quiet kid whom Grace befriends. Grace and Sam’s friendship was endearing throughout, and Sam's struggle between siding with the girls versus the boys in the election was enjoyable. About halfway through the play, Thomas hands Sam a fedora and they begin to sing in a barbershop quartet alongside the play's other male students in an attempt to win Sam’s vote. Moments like this were funny for kids, but also entertaining to we adults who actually know what a barbershop quartet is. (This family musical also has other “older audience” jokes throughout – including Sam's stellar Richard Nixon impression during a classroom lesson on the U.S. presidents.) 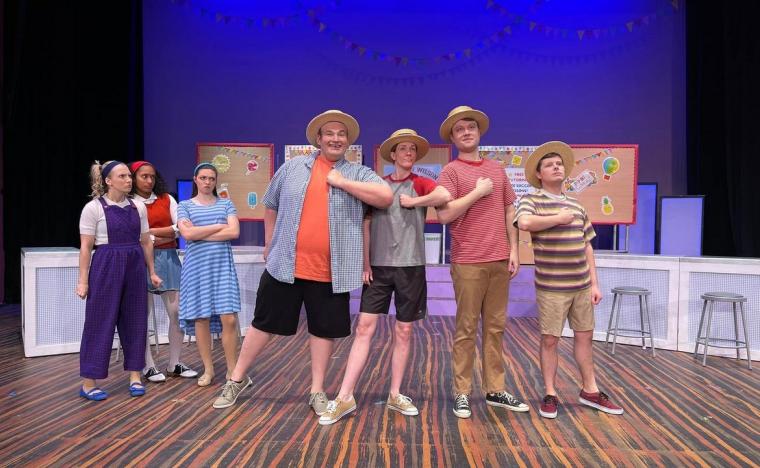 Ashley Becher directed and choreographed Grace for President, creating energetic musical numbers about our political leaders, voting, and more. And the actors interacted with the audience impressively, asking questions to audience members and going into the aisles, and even schooling kids on all things political. Some of their queries I didn’t 100-percent know the answer to, either, so when you bring your own kids to see this, you may find yourself getting an American-government lesson, too!

Helping to fashion this patriotic classroom environment were scenic designers Becher and Nick Divarco, who lined the back wall with all of the U.S. presidents’ faces and had moveable set pieces that proved versatile in the staging. One moment I particularly enjoyed was their employment of a table (a piece from Circa '21's mainstage show Just Desserts) on which a kid was pushed around the stage. Meanwhile, lighting designer Kendall McKasson and costume designer Ellie Larson created bright, upbeat visual elements that complemented the scenic design, and Sam Ramont’s sound design began the show with a fine soundscape of presidential quotes, setting the stage for Grace’s eventual presidential journey.

Circa ‘21’s Grace for President is an endearing musical, and one that kids should see. It's lighthearted and fun, but also includes relevant messages that are important for young audiences. Young voices matter, and this is a very simple and empowering testament to that – and any elementary-age kid who watches this will take something away from it, whether they walk away being inclined to vote in the November 8 midterms or not.

Grace for President runs at the Circa '21 Dinner Playhouse (1828 Third Avenue, Rock Island IL) through May 14, and more information and tickets are available by calling (309)786-7733 extension 2 or visiting Circa21.com.