Bard and Noble: Genesius Guild’s “Shakespeare’s Life in his Works,” at Lincoln Park through July 11 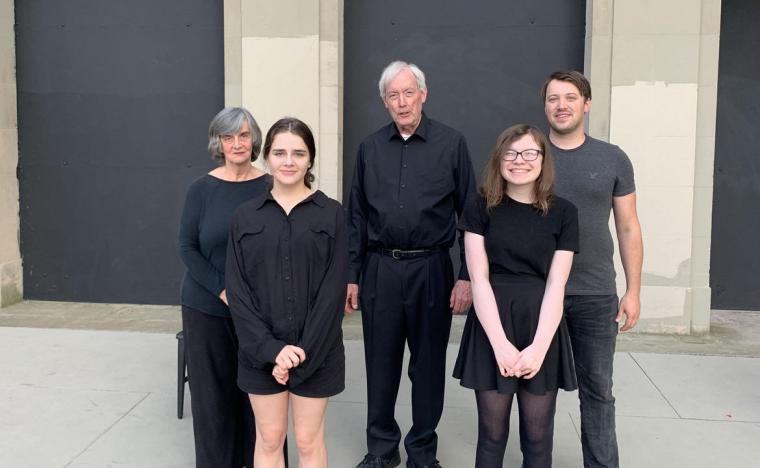 Many questions were raised this last Fourth-of-July weekend, such as: Do you prefer hot dogs or hamburgers? Which summertime dessert should you bring to the barbeque? Most importantly: How much do you really know about Shakespeare? While the first two questions are a mere matter of opinion, Genesius Guild looks forward to helping you better answer that third question with the company's latest production Shakespeare’s Life in His Works.

Any opportunity to sit underneath the trees in Lincoln Park watching live theatre is one worth having, but the evening’s overall educational experience is what makes this production completely unique. The program lists more than 20 words you’ve likely used that are all credited to Shakespeare, and, as the production gets rolling, you may be surprised to learn how many phrases in your vernacular come from him as well. I wager to guess that even those who love the Bard and may already know every last detail this production teaches will still find merit in the fun and interesting ways these little-known facts are presented.

Credited jointly to Shakespeare and Genesius Guild’s founder Don Wooten, Shakespeare’s Life in His Works jumps between narration and excerpts from his plays to help drive home the story of William Shakespeare’s life, both what is known and what scholars can speculate. The thing I found especially fascinating about this concept was that, out of context, it was somewhat difficult to discern what each quote’s source material was. The Narrator (Don O’Shea) did offer some attributes, but it was still an experience akin to Shakespeare Roulette – you’re never really certain where you will land, or if you would be able to recognize or place the line or monologue.

O’Shea had a lot riding on his able shoulders with this production. Without his through-line of plot, the play would have really been more similar to a bunch of friends sitting around hurling Shakespeare at one another. (Though an interesting concept, this wasn't so much the point of the evening.) Luckily, O’Shea managed to keep Saturday evening's presentation on track, and while a few of his long pauses felt more like he was trying to remember what came next, it’s easily forgivable when taking into account how much he had to do.

Assisting O’Shea was a merry band of actors: Dee Canfield, Tyler Henning, Leah Conner, and Kate Almquist. Clad informally in (presumably) whatever black clothes they found comfortable, this group seemed excited to be on stage. And in her directorial debut, Isabel Dawson focused her cast on creating a super COVID-friendly production. Featuring four black chairs staggered across the stage with a podium for our narrator’s home base, all actors stayed relatively close to the place they were assigned. While I question that choice – if only because everyone is outdoors and maybe this telling could have benefited from boasting a tad more action – I respect the need for safety and understand the reasoning.

At the top of the show, a lively bit in which the actors popped out from the wings to shout out a myriad of answers to the narrator’s questions stood out and was a great choice in keeping the staging interesting. While I found the overall stagnancy of the production as it continued a bit wearisome, I’ll admit that the way Wooten wrote the show meant there wasn’t much need for movement, either. Other more upbeat and commercial moments, however, came from utilizing Sara Wegener’s props, and the production’s humor certainly kept the energy up, creating an altogether enjoyable experience for audience and (I assume) cast alike.

Given that Lincoln Park was relatively quiet (apart from the pops of stray fireworks here and there) on opening night, it was a shame that it was difficult to hear the actors from time to time. Shout out to Henning, though, whom I’ll unofficially crown the “Projection King” – I never missed a word he said. However, it’s clear to me that whether I caught every moment or not, everyone in Dawson’s cast had a deep understanding of what was being said. Fortunately, the message of the show was not lost, even with a few throwaway quotes and monologues.

If you’re reading this with no intention of actually attending a performance, I challenge you to give Genesius Guild’s Shakespeare’s Life in His Works a try. For one, it’s free entertainment. (Though should you feel generous, the Guild will certainly accept donations.) Secondly, the sheer brevity of the piece, with its run time of about 50 minutes, makes it all the more appealing. I missed the memo to bring along a Whitey’s shake like many other patrons thought to do, but I would have hardly been able to finish it before the performance was over. (A cool “toast” to William Shake-speare perhaps?) Thirdly, you might find you’ve actually learned something. I know I certainly did. Even hundreds of years post-death, Shakespeare is still a cultural influencer.