When Barrie Met Silly … : “Peter & the Starcatcher,” at the Spotlight Theatre through April 10 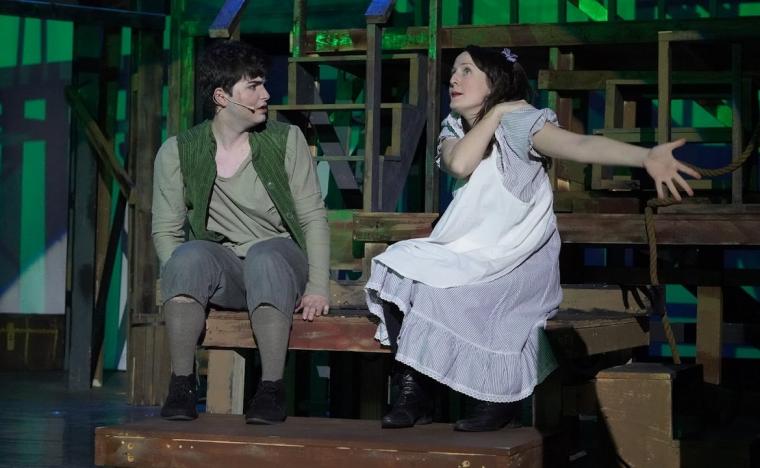 Peter Pan will never grow up, though he certainly has grown out. He was born about 120 years ago in the mind of J.M. Barrie, and in his magical, everlastingly youthful way has flown through several versions of himself in book, stage, and film forms. You probably have your own favorite manifestation, whether embodied by Mary Martin, Sandy Duncan, Cathy Rigby, Iowan Bobby Driscoll (the voice and model for Disney's 1953 animated film) – or maybe the namesake peanut butter.

The specific flight that is playwright Rick Elice's Peter & the Starcatcher, with its music by Wayne Barker, premiered in 2009, and is based on the first in a five-book series by humor columnist Dave Barry and author Ridley Pearson. Whew. A confusing pedigree? Well, this show confused me a bit – but only at first. The Spotlight Theatre's current offering, directed by Whitney Fahner with music direction by Katie Griswold, is yet another of the venue's slick and stylish productions of a lively libretto, this one loaded with big on- and off-stage talent and clever staging.

I wasn't feeling well on Saturday, and Fahner's first scene overwhelmed me as wave after wave of actors flooded the stage delivering an elaborate expositional narrative – like a human Star Wars opening crawl, except more bewildering. I thought, "How will I be able to remember all these people?" I shouldn't have worried. Watch and listen, and all becomes clear.

This is Peter Pan's origin story, set during the long reign of Queen Victoria. ("God save her!") Designed and lit by Spotlight co-owner Brent Tubbs, the set is a cluster of rough, narrow platforms, railings, stairs, and ladders evoking the two ships where most of Act I takes place. The actors run, jump, and clamber all over and around it – and with particular skill when the boats list dangerously and the performers tumble convincingly across the decks. 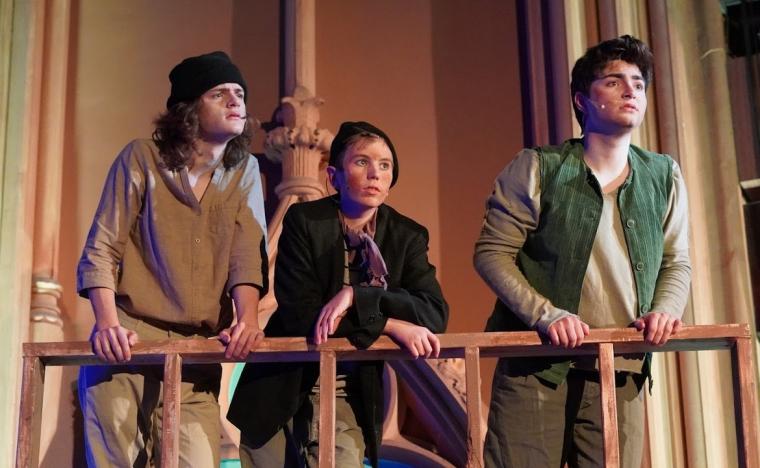 Before the voyage, we meet young Molly (Amelia Fischer), whose advantages include her loving, high-ranking father Lord Aster (Chris Tracy) and her doting, refreshingly frisky nanny Mrs. Bumbrake (Nancy Teerlinck). On a forbidden foray into the bowels of the ship, Molly runs into a trio of abused orphans: defiant Prentiss (Charles Budan), hungry Ted (Henrick Senne), and a yet-to-be-named Boy (Jacob Johnson) who is scorned even by his fellow unfortunates.

Fischer's Molly, a precocious 13-year-old, is admirable rather than obnoxious. She could have been played as a brat, yet in Fischer's hands, Molly is likeable and relatable, and her assertiveness and smarts drive the action. Among the heroines in the classic fantasy worlds of Neverland, Wonderland, and Oz, Dorothy always reigned for me. Dorothy did stuff. Alice was a passive dope, wandering around exclaiming over things, and while Wendy did stuff at first, once she got to Neverland, her big thrill became keeping house for a bunch of boys. (Um, what?!) But Molly more than makes up for past disappointments. Starcatcher's Peter Pan would have no story without her, and while Johnson's Boy (soon named Peter) is fearful and resentful at first – and for good reason – the actor ensures that the Peter-to-be is always appealing. Both Fischer and Johnson portray their characters' youth compellingly and assuredly, with nothing overdone.

Every adventure needs its bad guys, and the ones here include the pirate Black Stache (Reader employee Mike Schulz), his first mate Smee (Adam Sanders), and the rest of his seafaring sycophants. Schulz has played this role before, and his fussy physicality, malapropisms, and overweening ego are irresistibly funny. Sanders is a terrific comedic co-conspirator – and, as always, hilarious in his own right. There's also Becca Casad as Bill Slank, the villain you love to hate, and she's wicked (yet very safe) when wielding a whip. Speaking of props, there's impressive prop-flinging requiring timing and aim, and Senne ably rescued one item that went astray on Saturday. Though the production's youngest actor, he easily met the professional standard set by his castmates. The whole ensemble really shows its power in the spectacular numbers at the end of Act I and start of Act II, and made me wish there was more company singing. 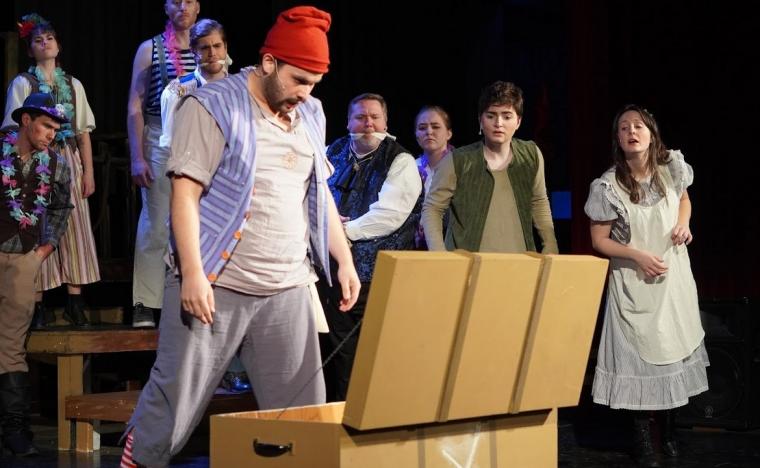 I've enjoyed many of this cast's and crew's work, at this theatre and others, and wish I had room to praise each one; just know that this production is more than the sum of its parts – and each part on its own is phenomenal. Elice's material is wonderful, as well. Pay attention to every word, as the punchlines pour down quickly, like a benign hailstorm. The original aspects here, including puppets, a cameo by a real-life English captain, and the 19th-century nautical/magical equivalent of an industrial spill, made me happy, and I left the theatre feeling much better than when I'd arrived.

Almost nothing is actually "fun for the whole family" – but this show is. There are enough action scenes and fart jokes to keep kids riveted, and for the rest of us, the script enlivens the inherent 19th-century stuffiness with contemporary references, including "TTFN" (ta-ta for now) and Ayn Rand (young folk, ask your grandmas). It also contains some mild sexual innuendo and violence – but remember: This is theatre! It's smartly silly theatre, too … and no, I'm not telling you what a starcatcher is. There's so much more to this production than I've said, and you need to experience it for yourselves.

Peter & the Starcatcher runs at the Spotlight Theatre (1800 Seventh Avenue, Moline IL) through April 10, and more information and tickets are available by calling (309)912-7647 and visiting TheSpotlightTheatreQC.com.