Be Their Guest: Quad City Music Guild’s “Beauty & the Beast” at the Prospect Park Auditorium through June 23 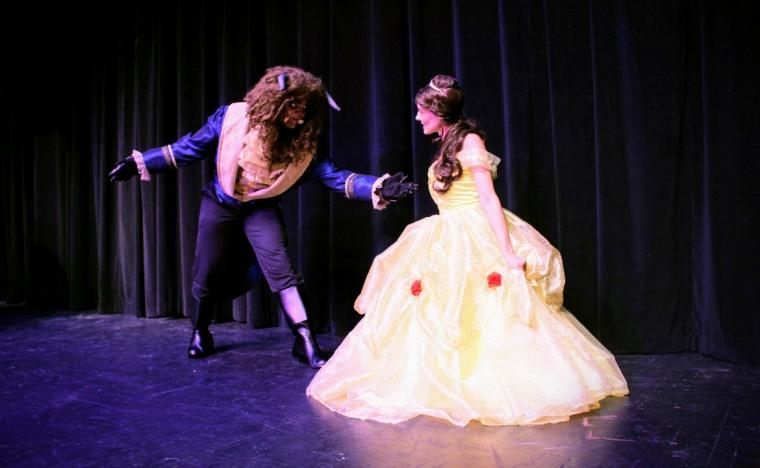 David Baxter and Heather Herkelman in Beauty & the Beast

Let’s just go ahead and say it: There was nothing inherently groundbreaking about director Bob Williams’ Beauty & the Beast at Quad City Music Guild. But, in this instance, saying that makes the show an unquestionable success.

You probably don’t need me to recap the tale as old as time, but just in case: In order to save her father Maurice (Joel Kolander), Belle (Heather Herkelman) finds herself living in a castle that is under an enchantment that has turned its master into a Beast (David Baxter) and the staff into household goods. The Beast must make someone fall in love with him before the rose loses all its petals or remain under the spell forever.

Herkelman’s Belle feels like she stepped right out of the animated movie, with her beautiful, strong voice a powerhouse as she avoided interacting with the town's shallow Gaston (Rob Keech). It seems wrong to suggest that I was rooting for Gaston because, obviously, the character is a self-centered jerk. But Keech was just so much fun to watch I couldn’t help getting excited whenever he appeared on stage. Gaston’s proposal to Belle in the song “Me” is a welcome addition to the animated movie’s canon, and Keech’s big, deep voice when paired with Herkelman’s was truly wonderful to hear. Keech also doled out my favorite musical number of the evening with “Gaston.” Beyond Steph DeLacy’s choreographic highlight in the energetic and lively dancing of the men’s chorus, Keech and his overeager sidekick Le Fou (the excitable Keenen Wilson) also brought down the house vocally. 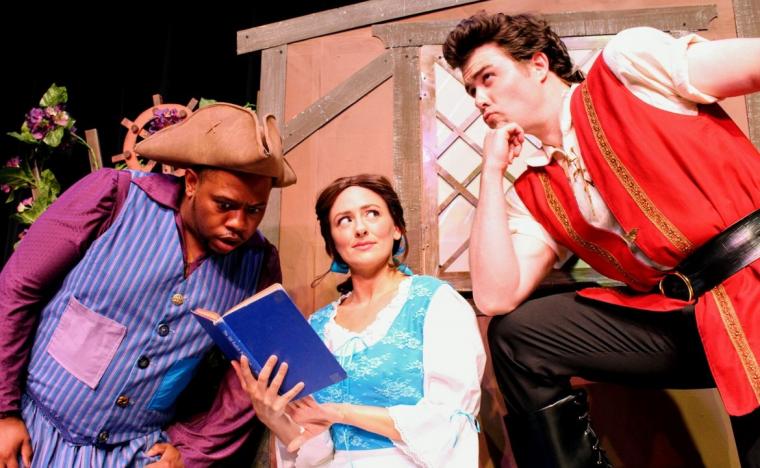 By the time the story found its way to the castle, the audience at Friday night’s opening performance was already enchanted. Yet after meeting the nervous nelly Cogworth (Travis Meier), the plucky and outspoken Lumière (J. Adam Lounsberry), and the motherly Mrs. Potts (Rachel C. Vickers), they were charmed lock, stock, and barrel. Contrasting the enjoyable inanimate-objects characters was Baxter’s surly Beast, who was not only physically beastly (with a growly speaking voice to match), but whose singing voice, too, was marvelously strong. Baxter and Herkelman were well-matched and it wasn’t hard to see how Belle and Beast could, in fact, have “Something There.” Music director Bob Manasco did a fantastic job with the singing talent in this production. Music Guild typically holds up its end of the bargain with the music they present, but here, specifically, there was no weak link in this cast of 32. Accompanied by a live orchestra, the songs were consistently delightful.

Meanwhile, the scenic world that the show inhabited was truly wonderful. Admittedly, when Beast proudly showed Belle the library, the environment was a bit lackluster – there weren’t that many books. This, however, was the only instance throughout the night in which the set (designed by director Williams) fell short. Beauty & the Beast calls for many different locales; my personal favorite was Belle’s house with its clear attention to detail. But the rest of the locales, from the town center to the castle and every location in between, were equally well-executed. Williams used the Prospect Park Auditorium space impeccably well, and scenically, this production was a real triumph – plus, the stage crew did a fantastic job ensuring that no transition took too long. 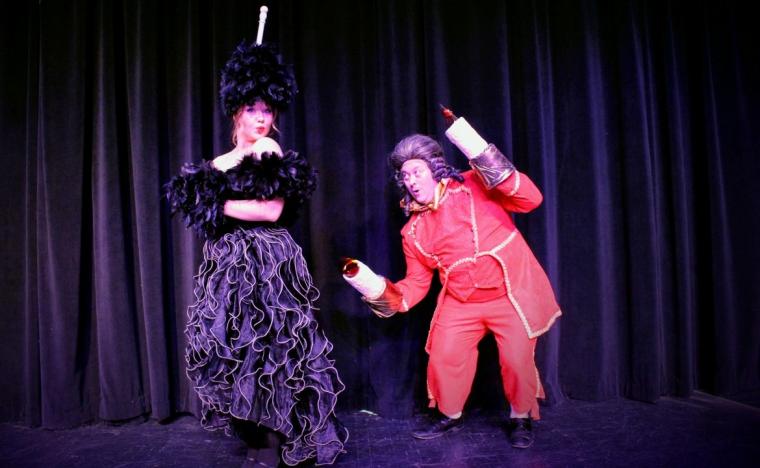 Linda Copeland Kozelichki’s costumes were as you might expect: eye-popping and bright. Belle had her classic blue dress made more visually interesting by a slight pattern in the blue, and when she finally put on her famed yellow ball gown, the dress sparkled and twinkled radiantly under the stage lights. (The lighting team of Brittney and Robert Crist excelled in this production.) Overall, Kozelichki’s costume choices, while expected, were also elevated, and from the townspeople garb to the formal attire for the finale, the costumes were almost across-the-board bright, fun, and recognizable. Admittedly, the napkin dresses during the ever-popular “Be Our Guest” number didn’t quite read as napkins … though in that swirling sea of cutlery and plates, their identities were easy enough to infer, so no harm, no foul. And while I also found Cogsworth’s personified clock costume a bit lacking – it was a little too human and not enough “clock” for my taste – these shortfalls were definitely the exception, not the rule.

Beauty & the Beast isn’t perfect, but I was perfectly impressed by the transformation at the end of the show – it was very cool, with Team Crist’s lights pairing with some awesome athleticism and a little bit of magic to make the scene wholly satisfying. All told, Disney lovers will adore the show's familiarity, music lovers will be impressed, and younger fans will appreciate the opportunity to take a picture with the costumed characters (and with a line far shorter than they’d find at the theme parks), so everyone wins! Quad City Music Guild’s Beauty & the Beast has everything you could want from your favorite bibliophile-turned-princess and even manages to give you quite a bit more.

Quad City Music Guild's Beauty & the Beast runs at the Prospect Park Auditorium (1584 34th Avenue, Moline) through June 23, and more information and tickets are available by calling (309)762-6619 or visiting QCMusicGuild.com.