Breaker of Chains, Mother of Dragons: “She Kills Monsters,” at Augustana College through November 17 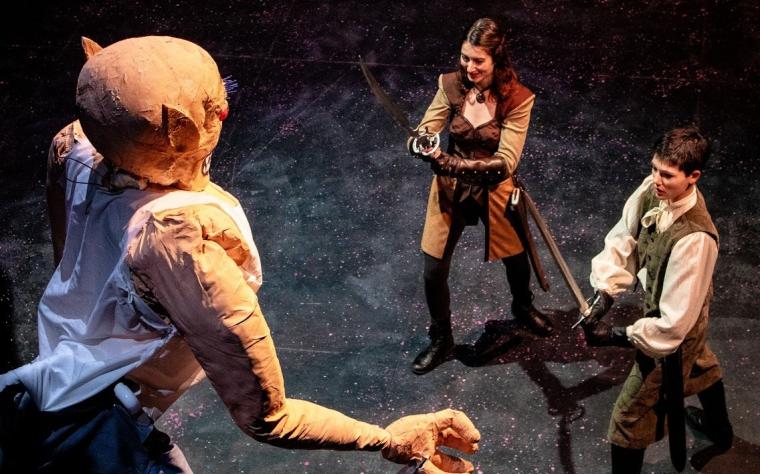 I was fortunate to attend Tuesday's rehearsal of Augustana College's current offering She Kills Monsters by playwright Qui Nguyen. Director Jeff Coussens and assistant director James Wheeler did stunning work in creating this ambitious production. When we enter the theatre, the stark stone ledges and pre-show music tell us that the show takes place (mostly) in a magical fantasy world, and the set comes to vigorous life after video screens light up, employing film, photos, computer animation, and amusing eight-bit color graphics to establish and enhance settings. I've rarely seen, in local presentations, stagecraft this sophisticated.

She Kills Monsters debuted off-off-Broadway in 2011, and the script was revised in 2016. Nguyen's creative, funny, and poignant story is of a woman who's determined to get to know her younger sister by immersing herself in the complex role-playing game which had enthralled her: Dungeons & Dragons. (Don't worry if you know nothing about this once-ubiquitous pastime – the onstage dungeon master and players explain it as they go, and dramaturg Virgil Hajdys provides an overview in the program.) 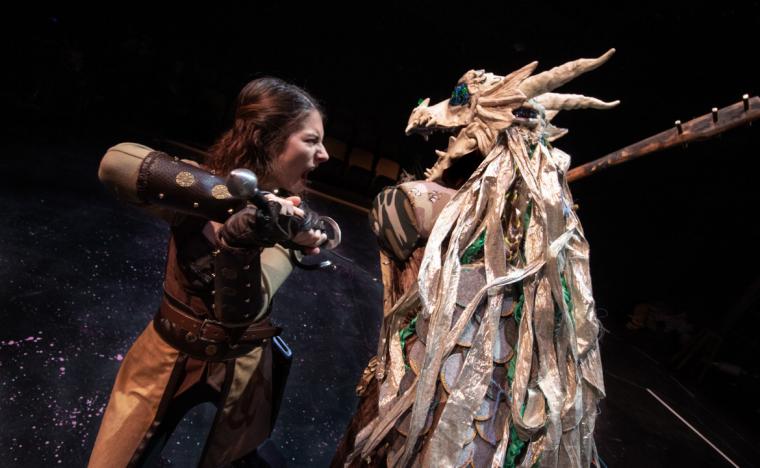 Jacqueline Isaacson, as uptight older sister Agnes, seethes throughout most of the show, angry and frustrated while trying to wrap her mind around this outlandish game and its inexplicable (to her) appeal, though she has her comical and tender moments, as well. She's surprised to learn that sibling Tilly (Elise Campbell) is a legend in the local gaming community. Keenan Ellis, as the dungeon master Chuck, is hilarious and true-to-life as a teenager trying to impress Agnes with a mix of bravado and self-consciousness. Ellis also reveals the DM's empathy as he guides the game, rolls the dice, and, behind the scenes, channels the other players (whom we see in the forms of other actors).

Tilly wrote this particular quest, and through the dungeon master's use of her notebook, Agnes meets her sister and companions in this fantasy land. As Tilly (or Tillius, as she's known in the game), Campbell is calmly powerful, and in this realm is smarter, more skillful, and more mature than Agnes – the opposite of how Agnes perceived her in real life.

Tilly's party of adventurers is just as intimidating. Chloe Onken, as Lilith the forceful demon, swaggers and sneers at the unwelcome sister-interloper. Noel Huntley, as Kaliope the elf, is strong, cool, and authoritative. (It was very satisfying to me to watch Agnes, with her initially superior demeanor, being dominated by a passel of supernatural creatures whom Tilly handles with ease. Do I have older sisters? Oh, yeah.) Brandon Smith, as Orcus, continually delights as the reluctant overlord of the underworld. As the band travels, they battle an assortment of perilous beings, fantastic in both senses of the word. The ingenious monsters were conceived by costume designer Ellen Dixon, marvelously executed by her crew, and skillfully brought to life by Em Palmieri, Emma Hydorn, Kelly Coons, Haley Tromblee, and Eli Bates.

Erich Fang, as Agnes' partner Miles, is as square and staid as she is, and his reactions are entertaining when he discovers – and misunderstands – the game. Lauren Larson, as Agnes' friend Vera, is droll as a burned-out high school guidance counselor, a role much different than the sweet Rosemary Larson played last season in Augustana's How to Succeed in Business Without Really Trying. Another performer familiar to me, Mary Sales, recently appeared in Playcrafters' 4000 Miles, and here takes a wonderful turn as a saucy fairy. Sarah Walton and Lucah Katauskas are also consistently excellent as a pair of enthusiastically ravenous succubi. 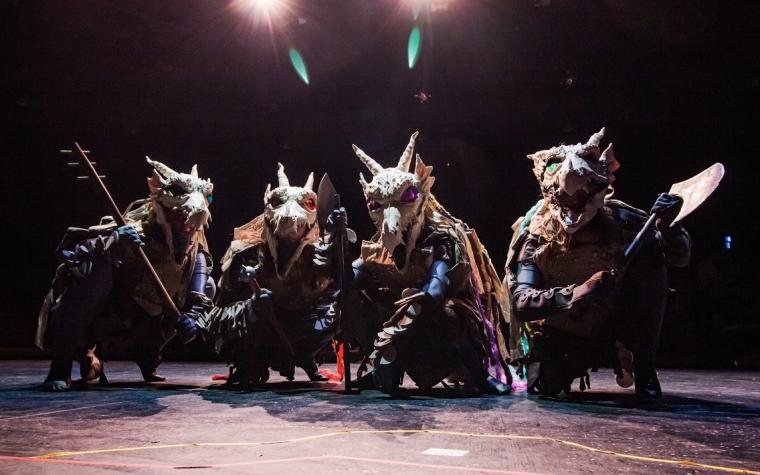 Titus Jilderda does much with his small role as Steve, who is the very definition of hapless. Jilderda sweats and stammers in the face of various types of abuse, always alone with no backup – but he keeps coming back to try again. His is a different kind of bravery, as genuine at that of the others who wield powerful weapons. Meghan Gove, who actually plays D&D in real life, opens and closes Coussens' production in epic narrator fashion.

As a persnickity actor/director myself, I noticed some slow cue pickups at Tuesday's dress rehearsal – understandable, as this is an extraordinarily complicated, action-rich show – but this particular nitpick isn't likely to bother most audiences. Also, if you're thinking of bringing the kids, be aware that this play contains a few sexual references. (After all, most of the characters are adolescents.) If it were a movie, I'd rate it PG-13.

Agnes takes us along on her journey, demonstrating that understanding people and the characters they assume – in a game or in real life – can be perplexing and difficult. No matter how we struggle, the roll of a die can change everything, and though there may be no magical remedy for calamity, we must persevere. There are only four performances of this marvelous, uplifting story, so reservations to She Kills Monsters would be wise.