Brothers and Arms: “Topdog/Underdog,” at the QC Theatre Workshop through November 18 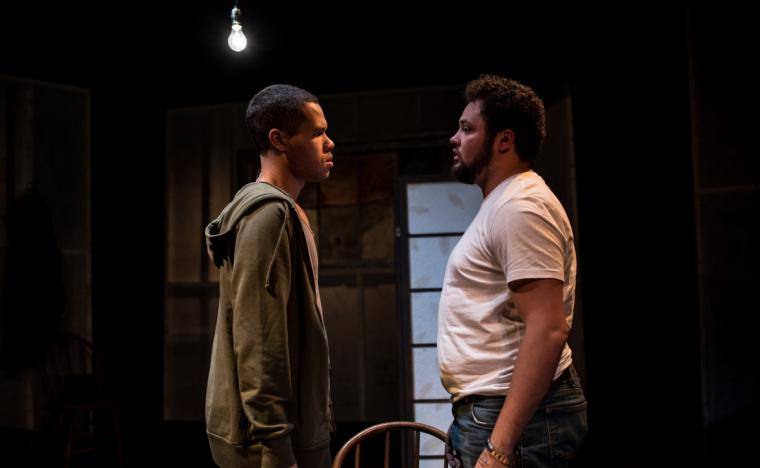 Lincoln, Booth, and a gun. What could go wrong? As you will come to find out in the latest QC Theatre Workshop presentation Topdog/Underdog, pretty much everything. This production is dark and riveting, even if you can see the inevitable end from the get-go.

Winner of the 2002 Pulitzer Prize for Drama, Topdog/Underdog is Suzan-Lori Parks' story of two African-American brothers, jokingly named Lincoln and Booth, trying to overcome their impoverished past and create something of themselves. Lincoln (Jordan McGinnis) a former three-card Monte scammer, is now trying to make an honest living while his younger brother Booth (Michael Alexander) tries to get into the hustle himself.

Director Lis Athas’ entire production is placed on the shoulders of McGinnis and Alexander, and on Sunday afternoon, both actors rose to the challenge beautifully. Throughout the intermission-less performance, Lincoln and Booth are everything to each other – confidants, friends, and family – and Topdog/Underdog's story is as much about their relationship as it is about their self-reliance in the face of life’s harsh circumstances. (After their parents abandoned them, first their mother and then their father two years later, Lincoln was in charge and did what he could to ensure he and his brother were okay, even if his choices were risky.) 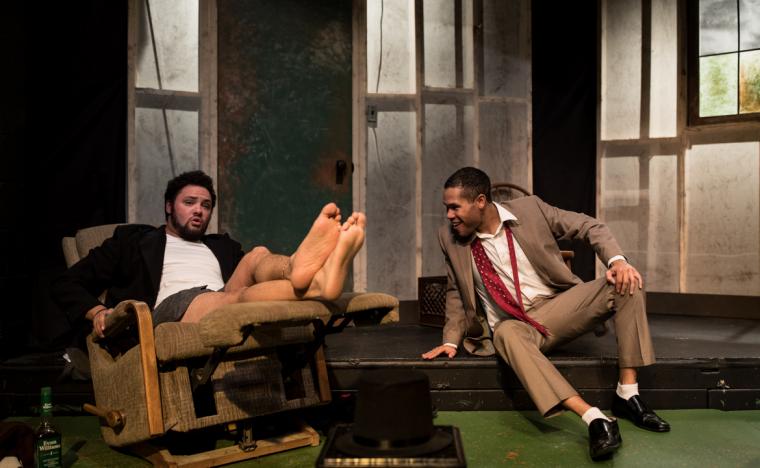 Lincoln’s job is paying all the bills, even though the apartment they share is Booth’s, and it was fascinating to watch McGinnis knowingly dance around the fact that everything balances on his character keeping a source of income. Lincoln is attempting to be a fine young gentleman, earning an honest paycheck with his “sit-down job with benefits.” That sit-down job is a warped arcade experience where Lincoln dresses as his presidential namesake as arcade patrons pretend to assassinate him with toy guns. It’s really just as twisted as it sounds, and when McGinnis practices the fake shootings for work, his earnestnes makes it become something entirely uncomfortable to watch.

Booth is a smooth criminal who steals what he needs, including two suits – one for him and one for his brother – and Alexander gets to the heart of Booth adeptly. His character felt almost manic-depressive, and Alexander brought a heightened adrenaline to the stage, as if Booth could never really relax for fear of missing out on what he believes he is owed. Alexander’s Booth was the perfect counterpoint to McGinnis’ Lincoln. Where Lincoln was resolved with what his life was, Booth dreamed bigger for the pair – or at least had dreams of more money. Lincoln is also the master of three-card Monte, but while Booth has similar aspirations, he lacks the requisite speed and finesse. Certainly, the difference in watching Alexander and McGinnis was steep; I could never follow McGinnis’ black deuce of spades, but when Alexander was moving the cards, it was easy, from my perspective, to keep track of which card was which. 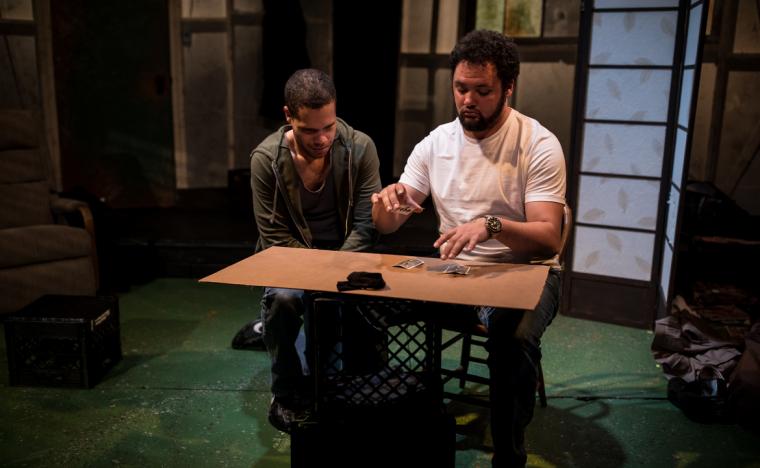 Aaron Randolph III was this production’s scenic and sound designer, and he was able to effectively set the scene with a dreary apartment that was little more than squalor. The walls were translucent, suggesting that they were thin. Sharing a few milk crates for furniture, Booth had possession of the single twin mattress while Lincoln was left with an old recliner. The apartment was small, with no sink or running water. At one point, Athas had Lincoln relieve himself in a plastic cup, and while I did find it distracting that the cup then remained on-stage for the remainder of the performance, this moment felt honest in a gritty way. The large personalities of Lincoln and Booth in this intimate space created the feeling of tigers in a cage. The brothers depend so much on each other that as much as they do have a love for one another, there's an unmistakable resentment bubbling just under the surface, adding an extra element of tension.

Meanwhile, designer Jacob Sikorski’s lighting choices also played into the brothers’ tension. Ranging from the apartment’s single bare bulb to a brightly lit stage, the lights effectively reflected the play's mood and the emotions of Lincoln and Booth.

At the beginning of Sunday’s final scene, I was unfortunately sitting where I couldn’t see anything but Booth’s feet. But it became almost metaphorical to me, as I had grown to connect with McGinnis’ Lincoln but still felt wary of Alexander’s Booth and his growing animosity towards life in general. Topdog/Underdog is a tragedy that leaves more questions than answers, and the QC Theatre Workshop’s production tackled the story with as much care as possible, opening the door for everyone to draw their own conclusions as to what the major takeaway is. The poverty, pain, and brotherly dysfunction may not be easily digestible, but there’s enough meat in this compelling production to chew on for ages.

Topdog/Underdog runs at the QC Theatre Workshop (1730 Wilkes Avenue, Davenport) through November 18, and more information and tickets are available by calling (563)823-8893 or visiting QCTheatreWorkshop.org.