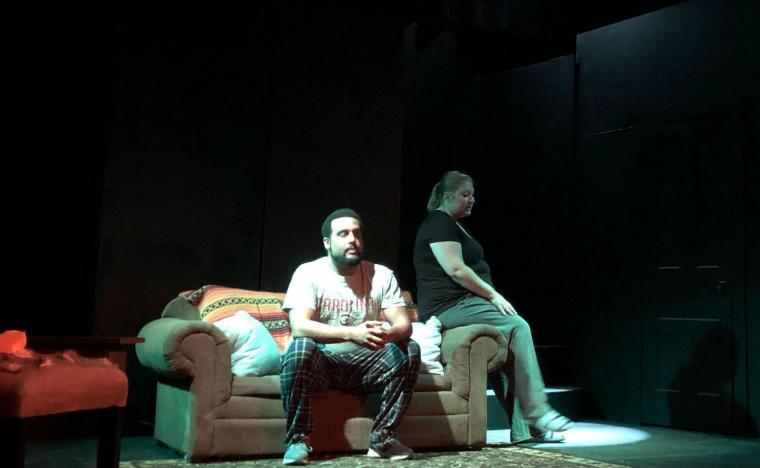 Kyle Taylor and Tabitha Oles in A Dog' House

It’s a dog-eat-dog world. Literally, in fact, at New Ground Theatre’s production of playwright Micah Schraft's A Dog’s House, when Jock – the dog of Michael (Kyle Taylor) and Eden (Tabitha Oles) – kills the dog new neighbors Robert (Jordan L. Smith) and Nicole (Ashley Hoskins). As Michael and Eden struggle with the moral implications of what to do next, they find out a lot about themselves and their relationship, and Friday's opening-night performance of director Jacque Cohoon’s production was an intimate, emotional experience I wasn’t expecting.

New Ground's latest production starts with Eden and Michael discussing their dog and his actions, and mere moments after we learn the dark truth of what happened to her cherished dog Phoenix, we meet Nicole as she’s passing out lost-dog fliers. It’s perhaps natural for the audience to initially take the side of the couple they’ve come to know – Eden and Michael – and hope Nicole doesn’t learn the unhappy truth. This scene between Hoskins, Taylor, and Oles was among the evening’s funniest and, while the laughs did not continue as the drama unfolded, it was certainly nice while it lasted. Hoskins’ Nicole was a sensitive soul, as well as the character I was most drawn to as we later see her openly mocked and ignored by her husband and lied to by her new “friends.” Hoskins brought a sense of nervousness to her deliveries – even when Nicole was supposed to be letting loose, she still seemed closed off – and this was certainly understandable given that she was this play’s perpetual victim. 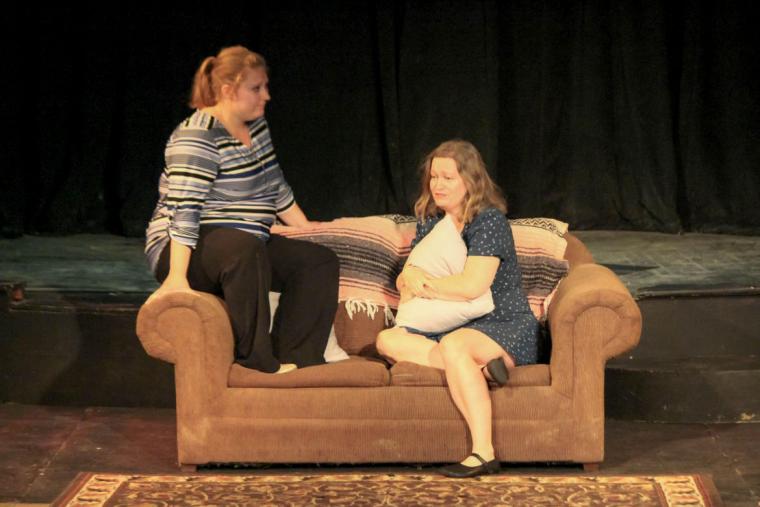 Yet in Schraft’s hands, the characters are nearly all victims – of circumstance. Oles’ best scene was with Hoskins, the duo chatting and gossiping in a wine-and-Valium haze. It was here that Eden revealed how she and Michael met, and how the chances of them making their relationship work were slim. This moment led to an air of disinterest on Eden’s part. And even later, as Eden lambasted Michael for their ruined plans one Christmas and how that was indicative of Michael’s personality, there seemed to be an underlying lack of giving a damn, as though Eden was so far past Michael’s behavior that it ceased to even matter. While it was an interesting directorial choice, I did feel it lessened the impact of the production’s final action: If Eden doesn’t care one whit about Michael, it becomes difficult for the audience to care, or find empathy.

Michael was the character I never quite figured out. While Kyle Taylor has excellent stage presence, it was hard to discern his character’s primary motivation throughout the evening. When Michael was to appear overly defensive of Jock, Taylor’s portrayal didn’t seem overly convincing. As the secrets and lies unfold throughout this show, Michael appeared unable to handle any hard truths – and his depiction left Michael deep in his own head, as though he always knew what would happen at the end.

Meanwhile, Smith’s fierce style of delivery had me wondering from the moment he entered whether Robert knew from the get-go what really happened to Phoenix, or if he was at least was suspicious of Jock. (If that was the case, we never found out.) Smith made his character so extremely unlikable, and with such a harsh intensity as he ridiculed his wife and forced his way into training Jock, that I couldn’t help but wonder if Jock killed Phoenix as retaliation against Robert. 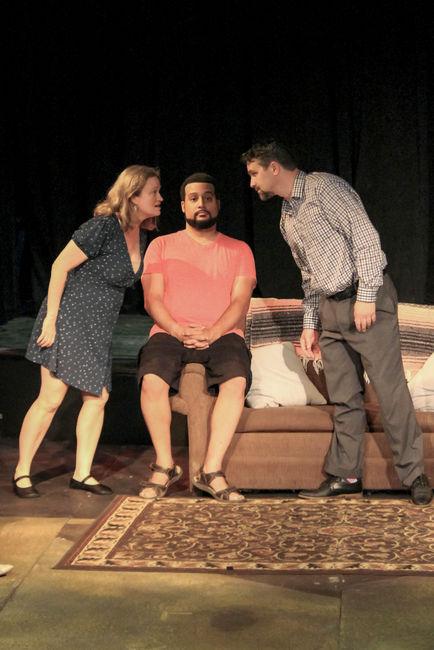 Director Cohoon, with the help of Craig Cohoon, built a very minimalist set. Early in the show, Michael credits Eden for the design because she “has an eye,” and, based on the few pieces we do see, it isn’t hard to imagine that being true. Some blackouts in the production, however, felt a bit long, and would have, in my opinion, benefited from music to not allow heightened emotions to subside between scenes. (I also worried for the actors, as they seemed to not know where the steps were during their many moments in the dark.) But the highlight of the stage set-up came after Jock destroys a chair, leading Michael to rearrange the furniture so the couch largely obscures the stage. This felt odd, initially, but made sense during the final climactic scene.

The show’s conclusion is not for the squeamish; even as I came to realize what was going on, I still hoped to be wrong. And the action became even more gut-punching when Eden appeared and Michael described what happened in a scene that paralleled the play's opening. New Ground’s production, meanwhile, gives you an opportunity to check in with yourself and where you would draw the line. As the horrific situation kept building, Eden and Michael got into a tug-of-war that ended with an incredibly sickening thud. Everything thereafter wasn’t very surprising – solid groundwork had been laid throughout the intermission-less evening – but it led to an unsettling conclusion, and the curtain call brought an undeniable sense of relief about being back in reality. Fetch a friend and see A Dog’s House, a truly thought-provoking production.

New Ground Theatre's A Dog's House runs at the Village Theatre (2113 East 11th Street, Davenport) through August 18, and more information and tickets are available by calling (563)326-7529 or visiting Facebook.com/newgroundtheatre.