Catch Them If You Cannes: "Diamonds & Divas: A Murderous Fiasco," at the Circa '21 Dinner Playhouse through April 6 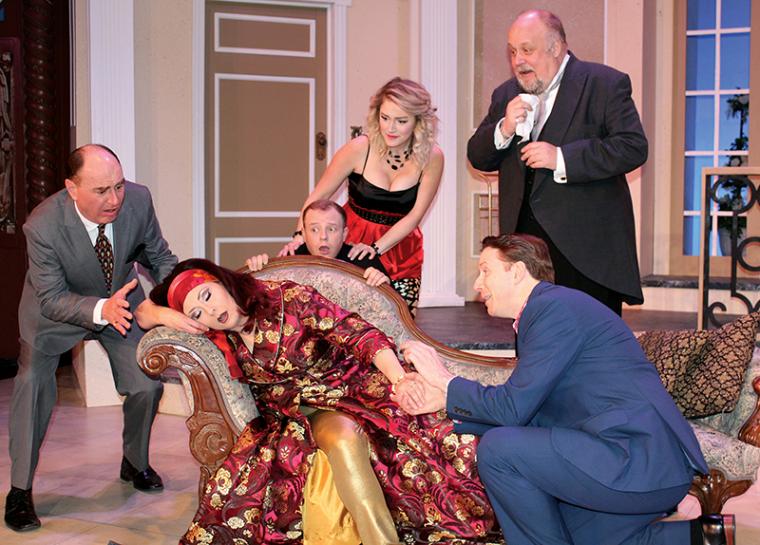 It was mentioned – more than once – at its opening-night performance that the Circa '21 Dinner Playhouse’s production of Diamonds & Divas: A Murderous Fiasco was the comedy's United States professional premiere. If we were supposed to be impressed by that fact, it really isn't saying much, as author Robin Hawdon's script would feel right at home with a group of American middle-schoolers. However, the cast, composed of many familiar Circa '21 favorites, injects talent amidst the chaos of this melodramatic escapade, almost fully redeeming an otherwise ridiculous affair.

With no really discernible plot, Diamonds & Divas is a whodunit in which everyone in the audience already knows who's done what. With the action perfectly timed to Bret Churchill’s lovely sound design, we watch as Jimmy (Tristan Tapscott) attempts to steal a diamond necklace from the hotel room of Grace Gervaise (Miranda Jane) at the Cannes Film Festival on the French Riviera, but hijinks ensue when his attempted theft is interrupted.

In this production, all clichés are present and accounted for, and with its old-school slapstick and larger-than-life gestures, director Warner Crocker probably had a delightful time dreaming up the heightened reality Diamonds & Divas demands. In its excellent wordplay and repetition, the comedy was completely straightforward, and as I’ve already talked about the diamond necklace, you may find yourself wondering which characters are the title's referenced divas. (A hint: It’s the entire cast.) Collectively, these characters were so overdone that they should have been irritatingly unlikeable. Yet the actors were so skilled and self-aware of the over-the-top madness that the performers actually became quite endearing. 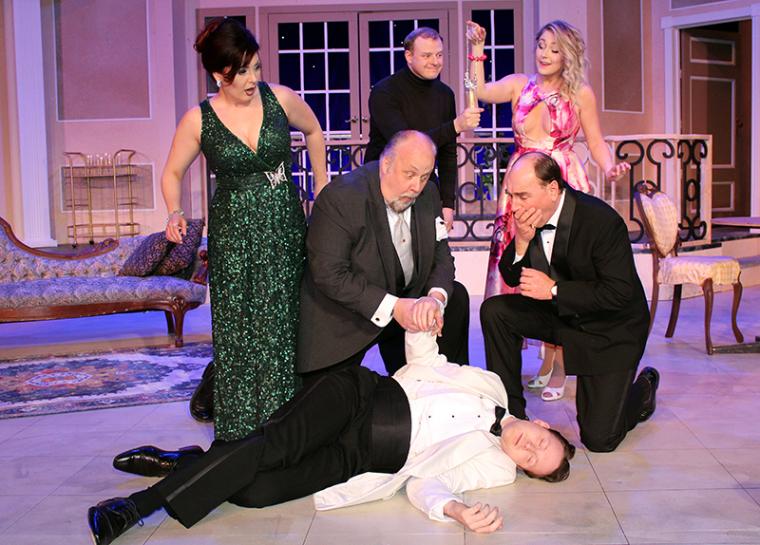 One would think that cinematic leading lady Grace would be the biggest diva in the room, but the Jane brought level-headedness and strength to this production that were very much appreciated. Perhaps the ultimate duel of diva-ness was between Tom Walljasper’s whiny Englishman Oscar Gervaise and Don Denton’s Adam, the latter of whom spoke in an over-the-top British accent with uppity persona to match. Denton and Walljasper were richly committed to the crazy their characters required, yet never came across as anything other than sincere in their unbelievably foolish roles.

But the true diva of the group night actually be hotel manager Monsieur Boniface (John Payonk), who fancies himself in charge and completely rational. He isn’t. In fact, Bonifce exclaims “Mon Dieu!” so frequently that I was surprised God Himself didn’t float down from the heavens and ask him to please stop. (Much of this production’s comedy stems from the frequent rehashing of details in an attempt to get everyone on the same page; it just so happens that most of the time, everyone is wrong.)

As for Tapscott’s jewel thief Jimmy, he's the ultimate embodiment of nervousness. Jimmy and his accomplice Haley (Cara Chumbley) don’t speak as much as the others but were nearly always around, and it was great fun watching their non-verbal communication as the pair tried to be sneaky. How no one on stage appeared to notice them defied logic, but was entertaining nonetheless. At one point during the March 1 performance, Tapscott almost knocked down a column on scenic designer Jeff Weber’s absolutely gorgeous hotel-suite set and, while I think it was most likely accidental, the misadventure almost would've made sense in this production with its plentiful and outlandish physical mishaps. 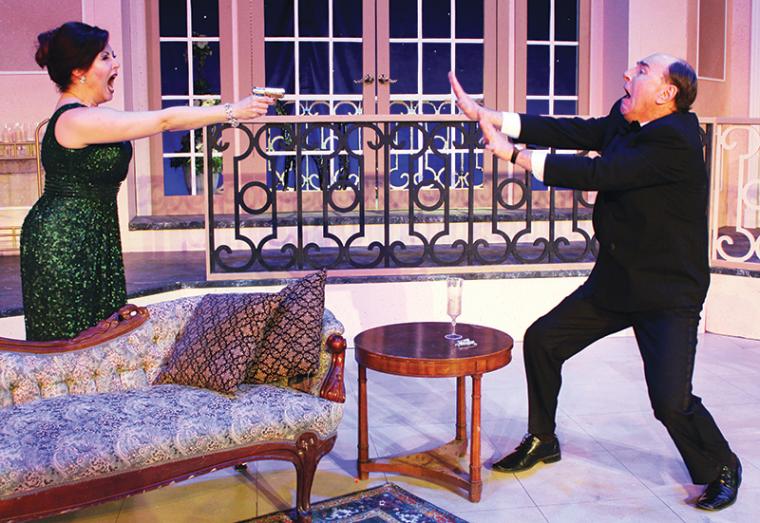 While the stage action may have been exaggerated, Gregory Hiatt’s impeccable costumes were not. Grace’s sparkly green film-festival gown was positively stunning, and across the board, Hiatt dressed the other actors equally phenomenally, with the suits and tuxedos donned by the gentlemen well-varied and just as fabulous as the diva-worthy women's dresses.

It would be easy to lump Diamonds & Divas into a “just meh” category of juvenile silliness. But just when you begin to think you know where this production is going, something new and outrageous happens, elevating the story to a new, impossible height chock-full of humor. At one point, it’s exclaimed that what's happening is “a farce, really,” and that sentiment could not be truer. This is a show that couldn’t (and doesn’t!) take itself seriously at all, which allows the audience to just let go, suspend reality, and have a good time. If you think about the plot too much, the production loses its immature escapism-as-entertainment appeal – so don’t. By the time it’s over, you'll realize the ride was an amusing one, and even allowed you to embrace your inner eighth-grader along the way.

With the climax featuring a dramatic pillow fight, of all things, I can say Diamonds & Divas: A Murderous Fiasco is definitely not among my favorite Circa '21 productions to date. Nevertheless, the talented cast manages to spin a 16-layer trifle of pure sugary fluff that is visually stunning, wholeheartedly committed to the ridiculous, and not unworthy of your leisure time.

Diamonds & Divas: A Murderous Fiasco runs at the Circa '21 Dinner Playhouse (1828 Third Avenue, Rock Island) through April 6, and more information and tickets are available by calling (309)786-7733 extension 2 or visiting Circa21.com.