Caught in a Bad Romance: Genesis Guild’s “Hippolytus” at Lincoln Park through July 25 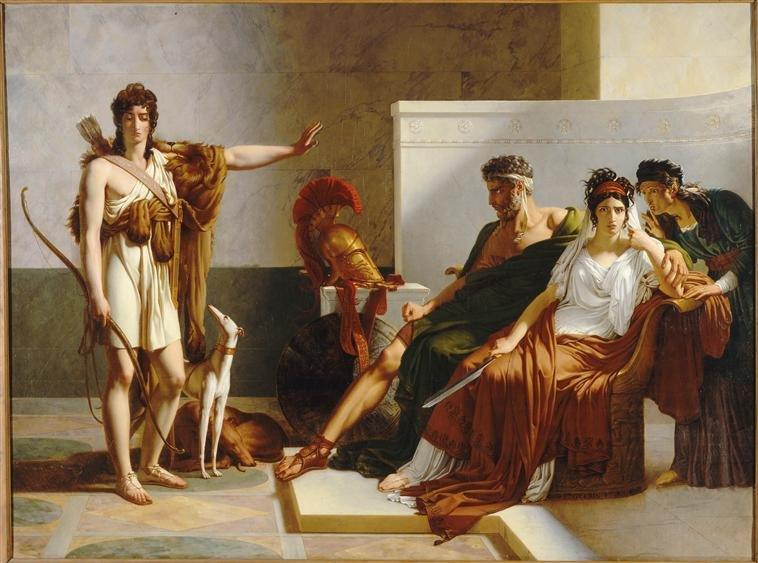 Who would have thought that a theatre production in which almost the entire cast wore masks would be so exciting? Aren’t we all a little sick of masks?

This past weekend, in all its masked glory, Genesius Guild’s Hippolytus featured gorgeous face coverings designed by Daitlyn Duffy and fitted by Bob Hanske, and these were certainly not your typical COVID-era face masks, either; they were works of art that amazingly kept mouths uncovered. When paired with Sara Wegner’s absolutely beautiful costumes, I was swept up in the story before anyone said a single word.

During the pre-show, Hippolytus director Michael Callahan spoke of how this tale from more than 2,000 years ago offers us, as a modern audience, a plot that is still relatable. And I must say, Ian Johnston’s translation of Euripides' play was super-approachable. There were lines that were so poignant and pertinent to today’s society that they made me laugh out loud and nod my head knowingly.

Hippolytus begins with Bella Kuta’s vindictive goddess of love, Aphrodite, explaining how she has grown angry with Hippolytus (Philip Tunnicliff) and his devotion to both purity and the goddess Artemis (Anna Schneider). As a result, Aphrodite has caused Hippolytus’ stepmother Phaedra (Sarah Willie) to fall in love with him. With a plot like that, it really isn’t surprising that the play is a tragedy, but it is one that isn’t afraid to inject humor when it’s needed.

For instance, watching Phaedra lament about her feelings was intensely melodramatic, but in the best way, and her nurse (Liz Sager) completely joined her there in Over-the-top-land. Poor Sager was, unfortunately for her, sporting a rather painful-looking sunburn, but somehow it only added to her charm and characterization. Since the nurse character is pained by what her mistress tells her, the sunburn was a physical embodiment of the awkward position her role puts her in. Willie and Sager were an excellent pair, and while their characters' attempts to solve their problem fail spectacularly, (and you knew what would happen next), I was so sad to see these ladies’ part of the story conclude.

The chorus members Melita Tunnicliff, Mollie Schmelzer, and Cait Bodenbeder were ever-present and given the roles of washerwomen to justify their combined presence. While these women were never distracting to the stage action, they kept busy by scrubbing out the tunics and rags they kept in their baskets as they kept a watchful eye and open ears on the action so as not to miss a beat. Even in silence, the chorus was captivating. When given the chance to speak, especially in their moments of unison, they blossomed into a force unlike any other on stage.

Jeremy Mahr’s Theseus, Hippolytus’ father, returns home to discover the tragedy that has befallen his home and, not surprisingly, reacts with anger. (Of the show's numerous masks, all of which were fantastic, Mahr’s was my favorite, as it incorporated his facial hair perfectly.) Mahr was also impressive when his powerful voice was able to be distinctly heard over a blasting train whistle. Actually, Callahan’s cast across the board should be commended. Battling ambient park noises can be difficult, but I don’t think I missed a word in Sunday night's entire 90-minute one-act.

Theseus takes his anger out on Hippolytus and banishes him with a fatal curse, just in case one or the other doesn’t work. Poor Philip Tunnicliff: Every time Hippolytus was on stage, no one would listen to him, and it wasn’t because the performer lacked heart in his role. Sometimes, a tragedy is going to remain a tragedy no matter how much you enjoy an actor’s portrayal.

Eventually, Schneider’s Artemis – who up until almost the end hadn’t said a word on stage – decides to take her moment and explain to Theseus how wrong he was, that his son is telling the truth, and all accusations against him were false. But you know the saying “Too little, too late?” Well … that’s the case here. When the delightful Jacob Lund and Guy Cabell (Messenger and Servant) bring Hippolytus back, there’s nothing to be done except for the father and son to make their peace. Throughout the production, Callahan did an excellent job guiding his actors to create visual interest and they used the space beautifully. Plus, Wegener’s addition to Philip Tunnicliff’s costume for the final scene was effective and a great, creative solution to its staging.

As with any open-air performance in Lincoln Park, there were park-goers who were unaware a show was in progress, and toward the end of Sunday's performance, a group of teenagers walked by and one of their phones started loudly blaring “Bad Romance” by Lady Gaga. It totally stole focus, but the Greek Gods themselves couldn’t have picked a better lyric to describe this production of Hippolytus than “caught in a bad romance.” Callahan’s production was an excellent example of Greek theatre and full of nuggets of wisdom for anyone. Turns out it was the perfect capstone to my weekend. Maybe next weekend, it will be for you as well?