Chat Room with a View: “Water by the Spoonful,” at the Village Theatre through January 29 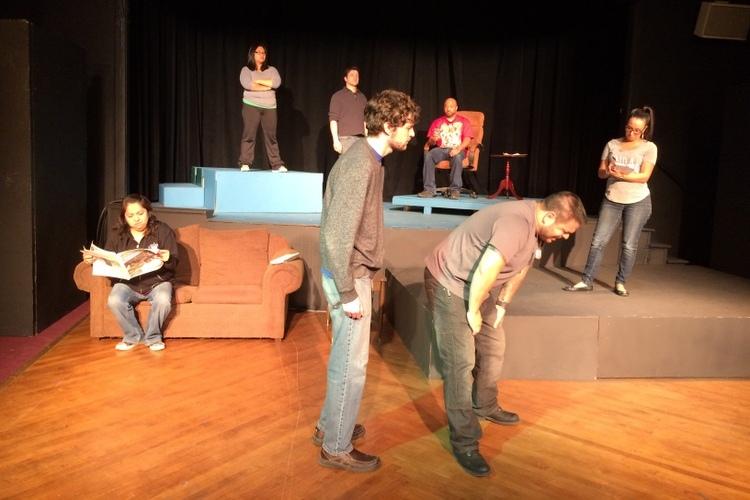 Quiara Alegria Hudes was awarded a 2012 Pulitzer for her play Water by the Spoonful, and it’s easy to understand some of the reason the work was recognized, considering that Hudes gives us so many different plays for the price of one. Part family drama, part wisecracking comedy, part PTSD exploration, and part cyberspace warning/celebration, Hudes’ tale is alternately tragic, funny, insightful, and even, at times, magical, and I’d love to see all those styles and qualities blended into a cohesive, thrilling production. In the meantime, we have New Ground Theatre’s Water by the Spoonful. We’re treated to a few sincere and effective portrayals, but unfortunately January 20’s premiere merely suggested the truly satisfying achievement the show could and should have been.

Odd as it may sound, it was smart of director Chris Jansen to cast real-life marrieds Eric and Kathryn Reyes as central Spoonful figures Elliot Ortiz and his cousin Yazmin; the performers’ clear comfort together and shared humor testify to the characters’ bond without coming off as flirtatious. Wounded during a brief tour in Iraq, the former Marine Elliot has been left to care for the dying aunt who raised him, his acting-career dreams largely dashed as he suffers the indignity of serving fast-food subs in Philadelphia. (Occasional commercial work still pops up, and Eric Reyes is at his most winning when Elliot is asked to repeat his grinning-goof catchphrase from TV, which he does with little provocation.) Yazmin, an adjunct professor teaching a course in jazz appreciation, is going through a divorce and hasn’t been of much help, and Hudes writes some strong, bitterly acrimonious arguments between the cousins that are nonetheless leavened with empathy, family duty, and deep love. The Reyeses handle those latter feelings admirably. It’s the “bitterly acrimonious” part that doesn’t register.

Part of the reason is that Elliot’s and Yazmin’s verbal battles don’t seem like fair fights, and for reasons that have nothing to do with Hudes. Left to her own devices in Spoonful, Kathryn Reyes is frequently wonderful. She’s a knockout when the audience is cast as Yazmin’s college students, with a clearly delighted Reyes expounding on John Coltrane and the power of dissonance, and when Yazmin delivers a heartfelt reminiscence of her Aunt Odessa teaching the value of sharing. The beautiful, focused Reyes never leaves doubt as to what Yazmin is thinking and feeling – although this is my first exposure to the actor, she seems incapable of stage fraudulence – and performs some of Hudes’ more moving monologues with simplicity and grace. Yet despite how great she oftentimes is, and the fun she appears to be having with her hubby/cousin, Reyes is left a bit stranded in Yazmin’s conversational duets with Elliot. Put simply, Kathryn Reyes is stronger as an individual on-stage than she is with Eric, mostly because Eric Reyes doesn’t seem wholly comfortable (yet) in what he’s doing as Elliot.

He has some lovely moments, particularly when allowed to be funny, but also when Elliot is forced to deliver a painful eulogy alongside Yazmin; Eric Reyes’ stricken expression and numbed speech are his most touching, memorable Spoonful contributions. But much of Elliot’s role (too much, I’d argue, for Reyes’ benefit) is dependent on anger, frustration, and blood-drawing sarcasm, none of which seem in Reyes’ wheelhouse here. On Friday, nearly all of his readings in those veins were either preceded by or ended with the same performance affectation: a breath-length eye-roll followed by him sighing and looking at the floor, as if clues to what Elliot was feeling might be found there. But I was even more off-put when the cousins made an uncomfortable visit to their aunt’s home and every indignant thing Elliot shouted at Yazmin was followed by a visible relaxation of Eric Reyes’ physical tension; he was in character when he was shouting, and that character promptly vanished when he was done. It’s an intensely tricky role, but I never had the sense of Elliot as a presence, which was especially damaging at the end of Act I, when the reasons for his collapse weren’t made remotely clear. Reyes does and says what the character is required to. As of opening night, however, Elliot still hadn’t appeared to find his way into Reyes’ bones.

But Elliot and Yazmin are only half of Water by the Spoonful's full story. Woven throughout the narrative are conversations held in an Internet chat room for former crack addicts, with “Haikumom” (Cindy Ramos) serving as site-administrator/moderator to three guests: 31-year-old Japan transplant Madeleine (Ana Ziegler Loes), middle-aged IRS pencil-pusher Clayton (Kermit Thomas), and John (Jordan Smith), a privileged yuppie new to the group. Hudes gives her online quartet fabulous, bitchy badinage to chew on, and does a clever job of dovetailing these cyber-voices – particularly Ramos’ ringleader – into the Ortiz saga, and in unexpected, thematically resonant ways. As of Friday, though, the emotional effect remained strictly theoretical.

Over what has felt like a fast two years for the actor, Smith has become a phenomenally likable and reliable area-stage mainstay, and does fine, concentrated work during John’s self-loathing explanations of his fall(s) from sobriety. The ballsy area-stage newcomer Loes, meanwhile, is a frequent hoot, never better than when her sardonic Madeleine is gleefully censoring “Haikumom” for exclaiming a profanity she and the others are forbidden to use. (I was happy and grateful that Jansen, or maybe Hudes, opted to not show these characters typing away on keyboards or iPhones throughout their online conversation, instead treating their staring-at-screens reality as a presentational conceit in which they were allowed to look at one another, and at us.)

Despite being pitched too high in Spoonful’s first act, with her wide-eyed enthusiasm veering dangerously close to cartoonishness, Ramos is quite excellent when “Haikumom” is voicelessly taking in a late-play dressing-down and re-enacting a traumatic event from her past. As for Thomas, though ... . Well, there’s no delicate way around this: On Friday, he clearly didn’t know his lines.

To be fair, Thomas assumed his role after the originally cast Fred Harris Jr. was hospitalized. (And speaking for those familiar with Harris’ exceptional stage work, and Harris as a human being, we wish him the speediest of recoveries.) But without meaning to be insensitive, that was more than two full weeks before Spoonful’s debut, and barring a couple of scenes, Thomas didn’t need to memorize lines; for most of the show, he was seated at an up-stage table fiddling with papers that could easily have been – and perhaps were – pages from the script. Ironically, Thomas was quite good when away from that table, and Clayton had a particularly sweet, late-play encounter with Madeleine that might’ve been my favorite moment of the evening had I not spent the whole scene hoping Thomas and Loes would just get through it unscathed. Barring, however, a few witty insults that Thomas delivered with aplomb – and the Playcrafters Barn Theatre’s A Woman Called Truth proved how good the actor can be – there were generally two- to 10-second pauses before every one of Clayton’s up-stage utterances. That killed the momentum in the chat-room sequences, and the lack of conversational rhythm was especially detrimental to Loes, who started one Act II tirade full of fire and sass and ended the scene looking miserably deflated. (She looked the same when an errant scene change found her stuck, under full stage lighting, uncomfortably waiting for a couch to be replaced by a bathtub. Please don’t be put off by this opening-night experience, Ms. Loes! Theatre fans want to see more from you!)

Scooting away from Spoonful’s actors and Jansen’s direction of them, there were problems here that stemmed directly from Hudes, from the playwright’s apparent fondness for easy, only borderline-amusing jokes to the moment that finds “Haikumom” excited to see a photo of her sister on the paper’s front page only to discover it’s a teaser for the woman’s obituary on page 41. Wouldn’t that teaser, or at least the photo’s caption, have immediately revealed that the woman died? (It’s my unfortunate duty to report that, in New Ground’s production, the River Cities’ Reader gives a wholly unconvincing performance as the Philadelphia Daily News.)

Most of my qualms, though, are site-specific, and include the (intentional?) ugliness of the color-uncoordinated set design, the (intentional?) paucity of arresting compositions, and the lighting design that only revealed actor Beau Gusaas’ ghost to be a ghost when he walked under the right lighting instruments. There’s a pretty awesome play buried in New Ground Theatre’s Water by the Spoonful, and maybe, by the show’s second weekend, it’ll be evident. But on opening night, sadly, you could only find it if you dug through the play’s presentation.

Water by the Spoonful runs at the Village Theatre (2113 East 11th Street, Davenport) through January 29, and more information and tickets are available by calling (563)326-7529 or visiting NewGroundTheatre.org.