Clause for Concern: “The Whistleblower’s Dilemma,” at the Playcrafters Barn Theatre through August 22 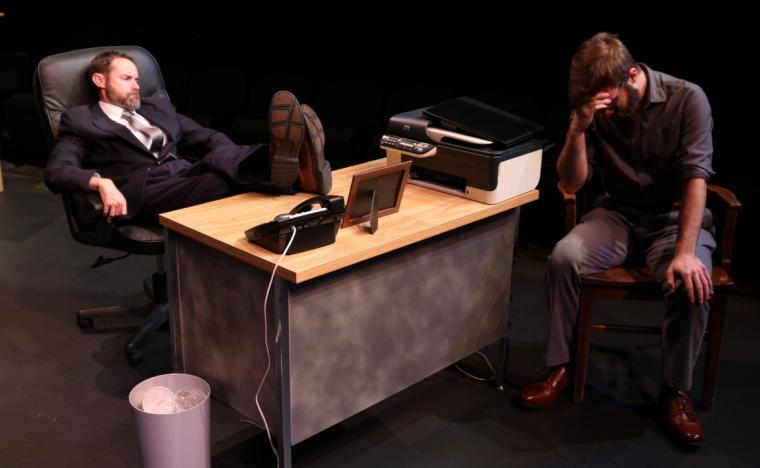 Greg O'Neill and Andy Curtiss in The Whistleblower's Dilemma

Any time you have the chance to catch a brand-new script in performance, it’s bound to be interesting. Local playwright Jim Sederquist kicked us back to 2013 with his new dramedy The Whistleblower’s Dilemma, and, under the direction of Mike Turczynski, Saturday’s presentation at the Playcrafters Barn Theatre definitely lived up to “interesting.”

Sederquist’s script follows small-town finance guy Joe (Andy Curtiss), who realizes his boss has been stealing from the state of Michigan. Joe then tries to rig the system, making the fraud bigger in order to utilize the “whistleblower clause.” At the same time, state fraud investigator Jackie (Sarah Laufer-O’Neill) catches on to the manufacturing company’s theft from the state. However, as there’s a budget freeze, Jackie’s not allowed to open an investigation. So instead, she ventures to her best friend’s hometown for New Year’s Eve to snoop around on her own.

From my perspective, this production’s largest dilemma was the script’s identity crisis; it tried to be too many things. It was a formulaic commentary on bureaucracy and its inability to do what’s right. It was also Hallmark-holiday-movie-ish, when big-city gal Jackie makes her way to a small town and ends up falling for the guy she’s there to investigate. At the same time, it was a true-crime drama as two best friends attempt to beat their boss at his own embezzling game. And on top of everything else, it was a broad comedy full of moments of ridiculousness.

This isn’t to say The Whistleblower’s Dilemma isn’t worth a watch. One of the best ways new works come to be is by being produced and workshopped in order to navigate issues and discover what works. And while Jim Sederquist’s story took a few convoluted twists, turns, and repetitions, the bones of a solid script are there. In truth, this production shines in many ways, and it’s in good hands with Turczynski. His cast is clearly well-prepared and Turczynski is adept at keeping the action moving as much as possible. 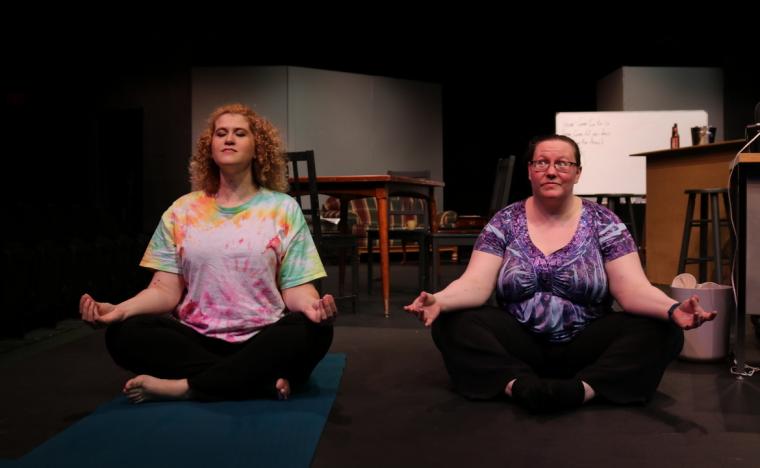 There were some particularly nice stage pictures and moments in which designer Lauren Marquardt’s lighting effects came up on different tableaux. I especially appreciated that all the necessary locations were set before the show even began, making scene transitions go much faster than they otherwise might have. While the night was overlong – in my opinion, the script could, and should, be trimmed going forward – not waiting for bulky set pieces to come on and off stage was a treat.

It was difficult, however, to discern who in the talented cast was the production's villain. On first look, it was Greg O’Neill’s Gerald, Joe’s embezzling boss. Certainly, Gerald’s actions aren’t great, stealing money and setting up someone else to take the blame should he ever get caught. But O’Neill portrays Gerald as likable, funny, and completely non-threatening, making the actor's presence a brilliant casting decision. (My only criticism concerning O’Neill was the mask he wore – it kept slipping down under his nose, causing him to regularly, and probably unconsciously, pull it back up.)

But Joe was also villainous, making plenty of poor choices even if his intentions were good. Curtiss’ take on Joe was calm and collected, even when amped up on coffee, and it cracked me up that Joe’s shirts were impossibly wrinkly. However, Joe wasn’t altogether likable, which meant you could almost root for Jackie to get the guy – and given that she was so pushy, her behavior felt nearly villainous as well. Laufer-O’Neill’s line deliveries were intense, and while I didn’t necessarily love her character, I appreciated the strong portrayal. Curtiss and Laufer-O’Neill played beautifully off each other, with their pick-up-line game show the charming highlight of their rapport.

Joe and Jackie were oddly working toward the same goal while also working opposite each other, yet because both characters are pretty ridiculous, I wasn’t sure whose side I was meant to be on. Jackie was far too invested in something her boss specifically told her not to do, while Joe was awfully high and mighty for somebody pulling a scam and outwardly lying to Jackie for two straight days. (The Hallmark recipe is for the lovebirds to admit their feelings before the lie is revealed.) 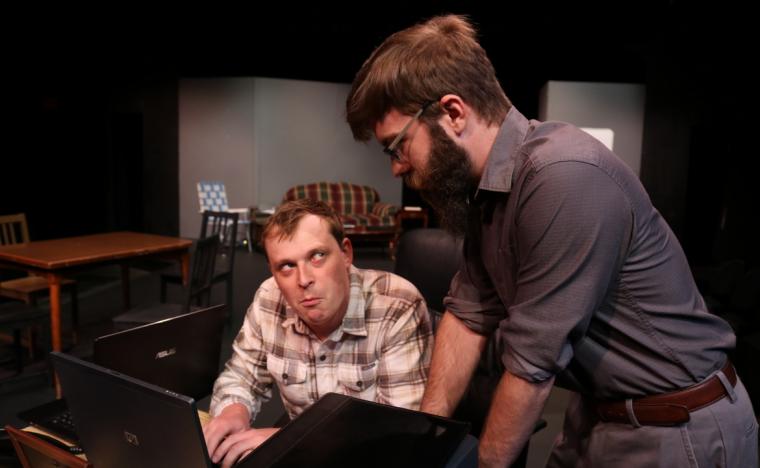 Joe and Jackie, though, had best friends – Madeline and Dan – who happened to be on-stage siblings, and Elle Winchester and Andy Sederquist were ideal sidekicks in the roles: loyal and funny. Winchester was especially lovely while practicing yoga and watching Sederquist’s hangovers was a particular hoot – and even though, logically, it made no sense for their characters to accept Joe’s harebrained idea, at least they were committed about it,

Last, but certainly not least, was Kassidy Holdridge as Jackie’s quirky boss Claire. After her first appearance, I spent the better part of the show waiting for Holdridge to return to the stage because I enjoyed her so much. She was the only calm to Jackie’s chaos, and this comedic character was most often the production’s voice of reason.

While I wasn't crazy about all the discussion of math and numbers, and I’m still unsure of who, exactly, was the story’s good guy, The Whistleblower's Dilemma is a worthy debut of locally written work featuring a truly remarkable cast.

The Whistleblower's Dilemma runs at the Playcrafters Barn Theatre (4950 35th Avenue, Moline) through August 22, and more information and tickets are available by calling (309)762-0330 and visiting Playcrafters.com.