Cooper Duper: The Mississippi Bend Players' “Mary & Ethel: How I Learned to Sing,” at Augustana College through June 27 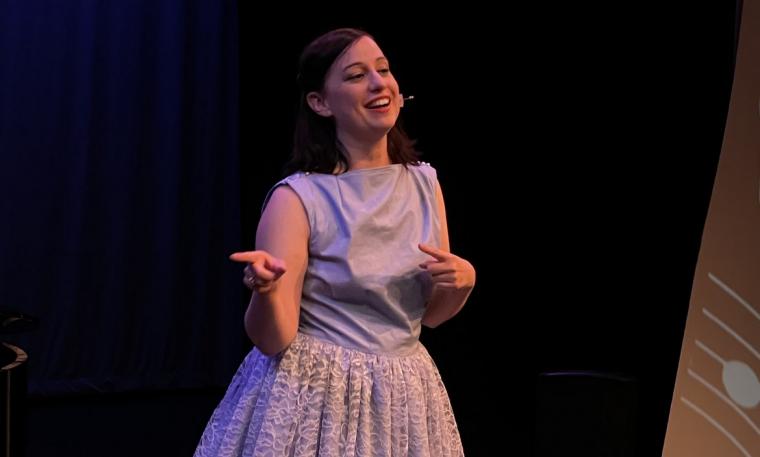 Shelley Cooper in Mary & Ethel: How I Learned to Sing

The Mississippi Bend Players, hosted by Augustana College at its Brunner Theatre Center, are now presenting Mary & Ethel: How I Learned to Sing, conceived and performed by Shelley Cooper. (Mary as in Martin, and Ethel, of course, as in Merman – could there ever be another Ethel?) This revue is advertised as a one-woman show with highlights from the careers of two musical-theatre luminaries, but don't believe it! It's actually not a one-woman show, as Cooper occasionally shares the spotlight with pianist Mason Moss. And we don't just hear about the two Broadway ladies, both of whose careers took off in the 1930s and spanned decades; we also hear about Cooper's theatrical career. After reading her credits in the program bio, I can say that Cooper is a bona fide musical-theatre luminary herself.

Mary & Ethel's star relates show-biz anecdotes and sings directly to us, as if she were a friend chatting in the living room. (Something of an attention-grabbing friend, sure, but we all have those.) With her repertoire including numbers from The Sound of Music, South Pacific, Anything Goes, and Annie Get Your Gun, Cooper has the prowess to really give these songs their due. But before I get deeper into her performance, I must talk about the set, as it's close to perfect.

Scenic and lighting designer Cameron L. Strandin created a giant frame of simple, asymmetrical curves for Cooper and Moss, onto which relevant images are projected throughout the night. We see Mary and Ethel, show posters and logos, tickets, video clips, and a glowing musical staff spangled with notes. The whole effect makes it feel as if we were flipping through a scrapbook of Broadway memories as we listen. Steal that extra bow, projections designer Roger Pavey Jr.!

Strandin's striking use of colored lights helps enliven the setting for each number. Particularly lovely is the one chosen for intermission: a combination of dark blue interspersed with turquoise bands on the backdrop, with intense purple spread over the floor and the black piano in a yellow spotlight. These are a few of my favorite things. (Okay, I'll stop that now.) An occasional white spotlight on Cooper heightened that we-are-in-a-theatre feeling. And yeah, we were in a theatre, but the casual living-room atmosphere prevailed. A set should never overpower the performer, and this one is both attractive and interesting without drawing focus away from Cooper and Moss. 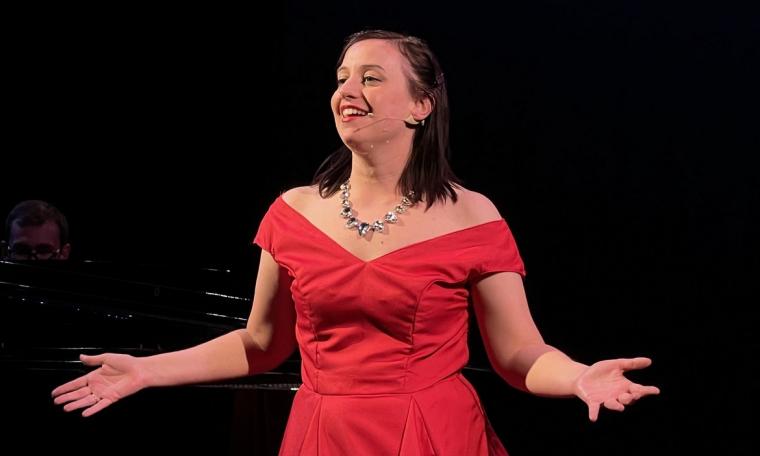 A wonderful set and lighting, however, are nothing without someone skilled enough to run them. Scenic-change artist and light board operator Trinity Filut accomplished the cues superbly, and made the projected transitions during Thursday's production as smooth as cream.

Now, back to the star. Cooper, who is Assistant Professor of Musical Theatre at Augustana, has a powerhouse voice and a wide range. She also has exquisite vocal control, and can both coo a soft phrase and shake the ceiling with a profoundly loud, operatic note. During the first part of Mary & Ethel, the piano was louder than I would have liked, as Cooper was hard to hear. But the piano mic must have eventually been turned down, as the audio balance was good for most of the rest of the show.

And talk about Moss at that piano! He employs the dynamic range of the instrument with admirable dexterity, and is not just an accompanist, but also a performer with skills to match Cooper's. Moss has an impressive résumé, too, and arranged Mary & Ethel's music himself – that is, he didn't just plop a generic fake book onto the music rack. 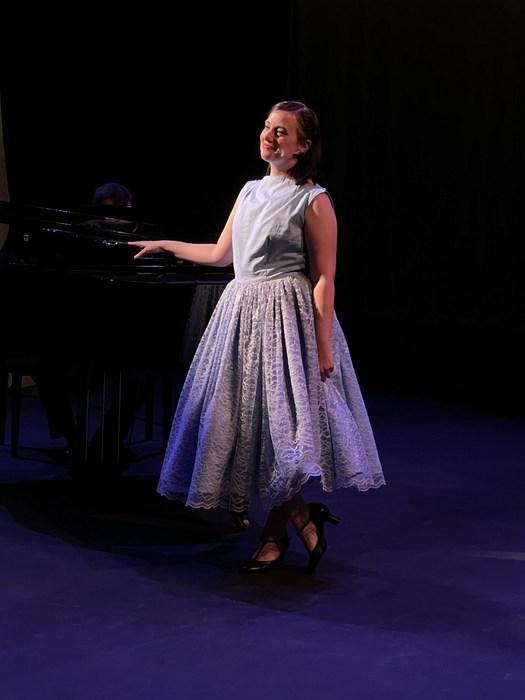 Cooper incorporated a few twirls and dance steps into some of her numbers, and I wish she had included more, as even simple movements bring more life into songs. But then, we can't have the singer out of breath. It's draining to sing for almost two hours – plus talk to the audience – no matter how many shows you've done.

This thoroughly show-biz-y experience evoked some extra memories for me. For example: Martin is most famous for playing the title role in Peter Pan. This, we learn, was the first musical that Cooper had ever seen. And which production did she see? The early national tour starring Cathy Rigby, which, coincidentally, I also saw. Cooper has also performed in some of the musicals popularized by Martin and Merman, as have I. That's not the hugest coincidence, as it only makes sense that big Broadway hits have such staying power that colleges and community theatres still present them decades later. But still, it added spice to the musical buffet for me.

Cooper doesn't mimic Martin and Merman, but I was pleased that she does evoke their personae with her voice and body: sweet, smiley warbles with demure postures for Mary's numbers; slightly nasal, brassy belts with broad gestures for Ethel's tunes. And Mary & Ethel: How I Learned to Sing wraps up with a medley of songs from one show in which both Martin and Merman starred (at different times), and in which Cooper also starred. It's a fitting finale for a lively, entertaining appreciation of three songstresses. Go and enjoy it before its short run is over.

Mary & Ethel: How I Learned to Sing runs at Augustana Colege's Brunner Theatre Center (3750 Seventh Avenue, Rock Island IL) through June 27, and more information and tickets are available by calling (309)794-7306 and visiting MississippiBendPlayers.com.