Corpses/Christie: “A Murder Is Announced,” at the Playcraters Barn Theatre through May 15 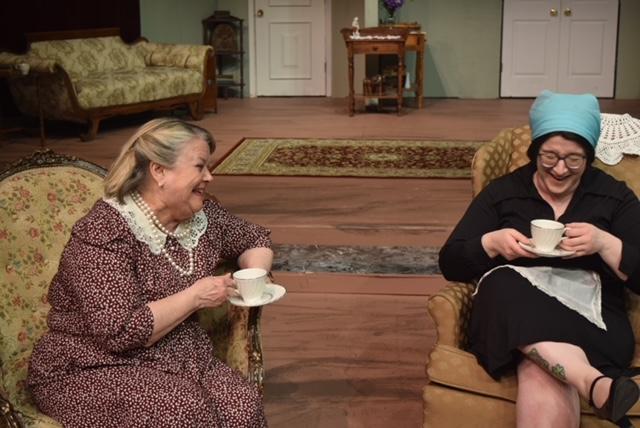 Pam Kobre and Bailey Hager in A Murder Is Announced

It was ironic, on Saturday night, that a character was chided for skipping to a book's final pages to see how it ended, because before attending the Playcrafters Barn Theatre's A Murder Is Announced, this reviewer – a notorious scaredy-cat – took to the Internet to discover the culprit's identity. The joke was on me, as the name the Internet provided actually didn't match any of the names in the show's program. As it happens, though, director Madelyn Dorta’s production never veered toward overly suspenseful or chilling, which I appreciated. Playcrafters has staged a true, old-fashioned whodunit, and while there were a few things I figured out as the night went on, there were also plenty of things I didn’t.

Based on Agatha Christie’s novel of the same name and adapted for the stage by Leslie Darbon, the plot to A Murder Is Announced follows the stated title. A published newspaper announcement reveals that a murder will take place at 6:30 p.m. on Friday the 13th at Miss Blacklock’s home. (I have to give Playcrafters a nod here for landing Friday the 13th of May as a performance date, because excellent planning deserves commendation.) Naturally, a few visitors turn up to see what the forewarning is all about, and sure enough: At 6:30, the clock chimes, and someone winds up dead.

For a person anticipating a murder in her home, Pam Kobre’s Miss Blacklock was certainly not overly emotional. Kobre tends toward the same calmness throughout the entire performance, but as she’s surrounded by the overly dramatic but delightful childhood friend Bunny (Elle Winchester) and housekeeper Mitzi (Bailey Hager), the decision to remain even-keeled makes more sense. There were a few truly comical moments, but Saturday’s audience seemed reluctant to laugh, as though somehow that would disrespect the murder. That was too bad, because Hager and Winchester were spot on as comic relief, ans their characters were among the play's most endearing – mostly because I felt we got to know them more than others and were consequently invested in their well-being. Sure, Hager’s accent ebbed and flowed a bit, but she was a hoot. And Winchester's Bunny bemoaning her lack of birthday presents was my favorite moment of the whole night. 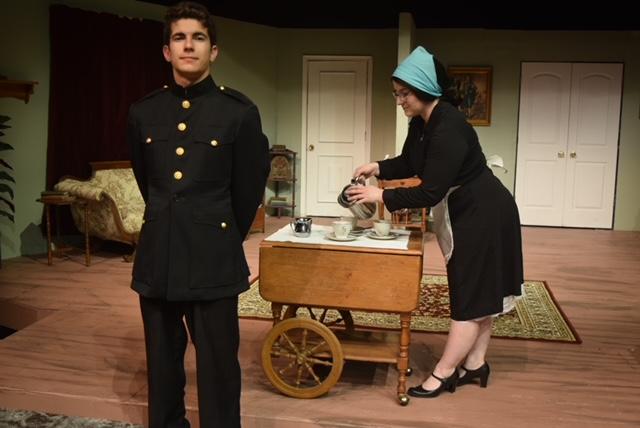 Also at Blacklock’s home are her guests Julia Simmons (Shyan Devoss), Patrick Simmons (Zack Zelnio), and Phillipa Haymes (Madison Duling), all of whom are keeping secrets of their own. The collective confidences, plus a full house, were ingredients that made the killing all the more dramatic.

Two different people investigate the murder: the anticipated Inspector Craddock, played by a distinguished Steve Trainor, and the unassuming Miss Marple (Kathryn Graham). Graham’s take on the well-known amateur sleuth was of interest to me as this Miss Marple never seemed to be particularly shrewd or cunning. If she was my neighbor, I’d have been incredibly irritated that she just kept showing up at a crime scene. Thankfully, Inspector Craddock took the woman's involvement mostly in stride, and Trainor's performance brought a great, strong presence to the cast.

Its lovely scenic design is another of this production's strengths. Zach Zelnio, John Zelnio, and Rich Kobre built what I consider to be the best set I’ve yet seen at Playcrafters; it was the perfect English countryside home, beautifully decorated by Gaye Burnett. The design offered plenty of seating but also plenty of space for Dorta’s cast to move around, and given that A Murder Is Announced had 11 people milling about, space was at an occasional premium. There was only one moment – when Bunny blew out her birthday candle – in which my view was obstructed. However, given that I’ve attended birthday parties before, my imagination was more than able to fill in the sight-line gap. 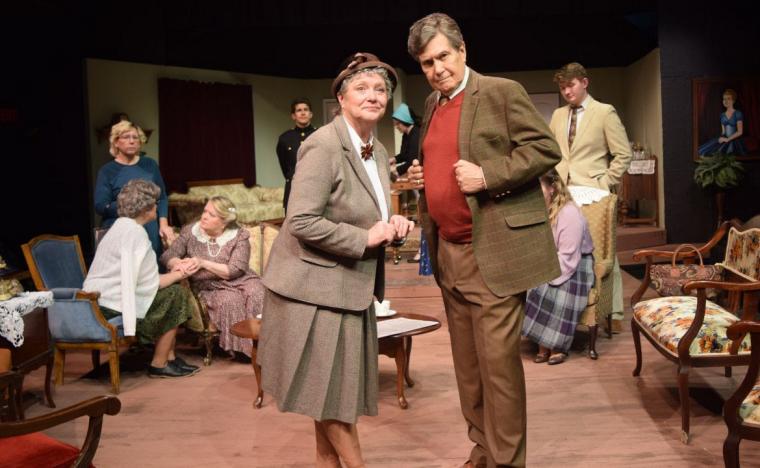 Meanwhile, costuming was another aspect in which Dorta’s production flourished. Thanks to a team made up of Winchester, Hager, Nicole Collins Payney, and Erika Seabloom, the cast looked truly magnificent. While I especially loved when there were a lot of navy-blue outfits at the top of the second act, the costumes and hairdos were all exemplary. Duling’s hairdo was my favorite – though Dorta tended to keep the performer in about the same place every time she was on stage, so I was only able to see her coiffure from one specific angle.

A Murder Is Announced was well-paced, though I was surprised by the ending when Miss Marple uncovered exactly what happened, as opposed to simply who done it. I’m not sure if it was a mishap with lines, but that key moment seemed to lack polish somehow, and fell a little flat. Not that I wasn’t still stunned at who among the cast was the killer; I just expected tension to palpably build before culminating in the big reveal, and didn’t feel there was enough escalating disbelief or anger. Nevertheless, Dorta’s production was entertaining, suspenseful, and left me guessing until the very end.

A Murder Is Announced runs at the Playcrafters Barn Theatre (4950 35th Avenue, Moline IL) through May 15, and more information and tickets are available by calling (309)762-0330 and visiting Playcrafters.com.